A cruising sailboat in the 20′ to 22′ range resides at the high end of the spectrum that most amateur boatbuilders can realistically aspire to. Go bigger and you need time, money, space and skills that few of us have. But there’s a delectable spread of choices at the level just below the impossible dream—plans by at least a half dozen highly regarded designers. Of these, Sam Devlin’s Song Wren 21, was, in the end, the most compelling. I had already built two smaller stitch-and-glue designs from Devlin Designing Boat Builders, so I felt comfortable with the process.

The Song Wren can be built with a shallow slotted keel and a centerboard for sailing thinner water and easier trailering and launching. I was drawn to the fixed-keel version for its ballasted-keel stability and cabin space unobstructed by a centerboard trunk. Its profile exuded the refined dignity of a much larger craft, and the gaff-cutter configuration offered the complexity I crave in a sailing rig. I love to stay busy, tinkering and tuning sail trim.

Devlin had drawn the Song Wren in 2011 as a commission, but nobody had yet built one, so no one could report on how it would sail, and if there were bugs in the design. I had budgeted up to $36,000 for parts and materials, a figure Devlin confirmed to be in the ballpark. Committing this pile of money to a boat that has never before existed, to be executed by an amateur who just barely knows what he’s doing, would seem edgy by any objective standard. But anyone who’s ever loved a boat, or a drawing of a boat, understands.

Devlin can supply a kit of CNC-cut okoume plywood panels for the hull and bulkheads, so I went with that option. Not only does it relieve the builder of the dismal job of scarfing plywood, it also provides a fiberboard building jig with slots that hold and align the Song Wren’s five bulkheads. This ensures that the hull will take form accurately, and that an insubordinate builder will not tinker with the basic design. There’ll be no sneaking in an extra 6″ of overall length, nor robbing from the cockpit to make more cabin. Amateur builders are probably better off with such temptations foreclosed.

The hull is built upside down on the jig, and the two-chine design (two side panels and one bottom half per side) made the handling of the big pieces manageable—with the help of one dedicated and capable friend. Topsides, I made one significant structural and aesthetic change, with Devlin’s approval. His plan called for a mast tabernacle to sprout from the cabintop with a steel compression post to carry the load to the keel. I planted the tabernacle on the deck instead and moved the cabin trunk’s front 6″ aft to lock into the tabernacle and buttress it. I added a beefy laminated deckbeam underneath, 2″ thick and 6″ wide, and supported it with the relocated compression post. The result is a terrifically strong foundation for the mast (which also enjoys six stays!) and, I think, an elegantly integrated design detail. It was a lot of additional work, but a project as ambitious as building a boat like Song Wren does not argue for taking the expedient path.

Though cabin headroom is only 51″, I wanted to outfit the living quarters as elegantly as possible. My plan is to park the boat at a marina in Port Townsend, Washington, or the San Juan Islands and use it as an occasional summer cabin as well as a daysailer. I installed a ceiling of 79 varnished sapele planks, concealed all electrical wiring behind sapele trim or structural bits, and built in a total of 16 drawers, shelves, bins, and cubbies to corral the clutter that loves to overwhelm small-boat cruising.

The build consumed 4,500 hours, and the cost of parts and materials came in about $1,000 below that $36,000 budget. It was challenging, but the 14-page plans set is extraordinarily detailed, including such things as a precise assembly sequence for the keel and several drawings of the cabin’s sliding hatch. Still, I wouldn’t recommend this as a first boat for any amateur builder.

With 302 sq ft of sail, the Song Wren seems generously canvased to make the best of Puget Sound’s notoriously skinflint summer wind. Devlin estimates the dry weight at 2,800 lbs, but I haven’t yet weighed this first real-world iteration. It glides eerily through air that’s barely stirring. Two knots (verified with an anemometer) gets us moving. In 5 knots of true wind we’re seriously sailing. On a close reach we enjoy 4+ knots of boat speed with 7 knots of apparent wind. In 10 knots apparent we are approaching our theoretical hull speed of 5.8 knots. A close reach seems to be this boat’s best point of sail. In the best conditions, the Song Wren will sail up to about 40 degrees off the apparent wind and tack through 95 degrees—decently pointy in the gaff-rig universe. The jib slips easily past the staysail stay for tacking, though in very light air it helps to furl it halfway when beginning the tack, then release the furling line to finish.

In this first season since the May 2019 launch, my wife Patty and I have tried all possible combinations of sail—always fun and interesting when you’re blessed with more than the usual main and jib—and learned what works and what doesn’t. The best balance and performance come with all three sails flying. The staysail doesn’t provide much power—it adds no more than 0.2 knot in most situations—but it does help us crowd the wind more tightly, and it looks way cool. I had hoped the first reefing step would be to simply furl the jib, but this doesn’t work well. The Song Wren develops an unpleasantly heavy weather helm with only staysail and full main, and if the wind continues to rise, it’s impossible to heave-to for further reefing unless we unfurl the jib. So, we reef the main first, then roll up the jib as the second reef. The boat balances beautifully on staysail and reefed main, which gives 63 percent of the working sail area. I may add a second row of reefpoints in the main, which could be more effective than dropping both foresails.

The Song Wren’s sail controls all are accessible from the cockpit (there are 13 lines in all), so while there’s a lot that requires attention, it’s all in a safe place. I located cam-cleated lines on the cabin top for a preventer so it can be deployed in seconds for downwind runs.

Some years back, I twice had to dock chartered boats under sail because of engine failures, so I always like to plan and test what I’ll do in case of that event. With the Song Wren, approaching a dock on staysail alone is a good idea since it provides a suitably poky pace and will drop instantly. It will not, however, claw upwind or tack, so a power-off docking still needs the jib’s aid until final approach.

For auxiliary power, I bought a new 8-hp Yamaha outboard. In all but one respect it was an excellent choice: reasonably quiet, smooth-running, powerful enough to push us to hull speed at half throttle, and incredibly economical—we’re averaging 12 nautical miles per gallon. The drawback is its weight. I tried to engineer an indented transom mount but failed, so I finally resorted to a commercial adjustable mount. Cantilevering 90 lbs out nearly 1’ behind the transom makes the engine  hard to tilt up and causes the boat to squat low on its design waterline aft. The only mitigation at this point seems to be to plant more ballast forward. If I were starting over, I would consider sacrificing some cockpit locker space (there’s plenty) for an inboard motor well.

Near the end of this first sailing season, the most remarkable thing about living with the Song Wren is its accommodations. For such a compact boat, both its cockpit and cabin seem incredibly spacious and comfortable. Four people easily daysail; three sleep inside as long as they’re close friends. The most rewarding thing is this boat’s jaw-dropping beauty—and Devlin deserves all the credit for it, not me. I have perhaps accentuated it by celebrating its woodiness with acres of brightwork (rub strips, toe rails, cabin sides, companionway doors, cockpit seats, and more), which I may regret when the time comes to sand and revarnish. Devlin implores builders to paint everything. But when you totally fall for a boat’s great looks, and its performance keeps you engaged and intrigued, you’re not afraid to look forward to a mountain of work in the relationship.

Lawrence W. Cheek is a journalist and serial boatbuilder (two kayaks and four sailboats to date) who writes frequently for WoodenBoat. 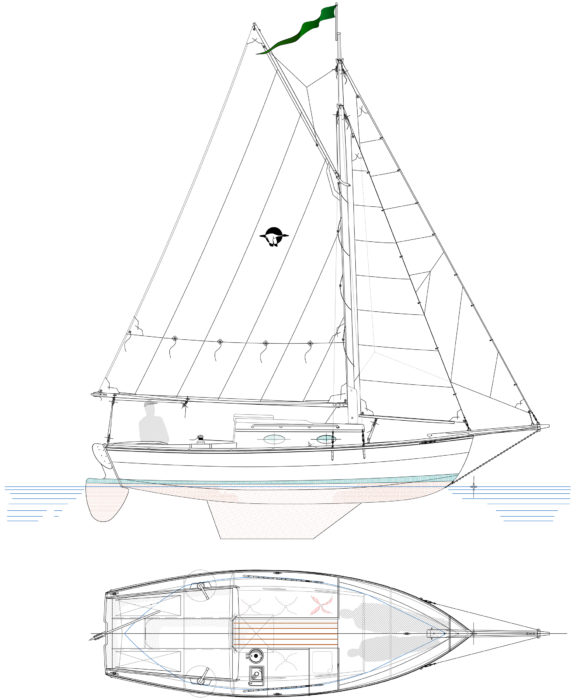 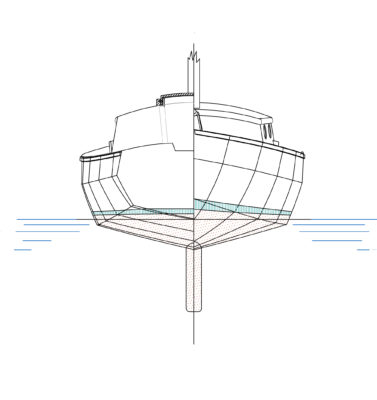 Construction plans for the Song Wren are available from Devlin Designing Boat Builders for $275 ($1 for study plans).

The three of us picked up our packs and set off on the first crossing along the sun-dappled path, winding through the thick bush of pine. While I could see…

Sometimes there are not enough hands to hold the main, steer the boat, and do something else; sometimes you just get tired and it’s a relief to have a cleat…

If Harbor Freight would offer wheels with finer grit, there’d be hope for the sharpener, but the 180-grit wheels that are supplied with the machine and available as replacements are…

The grappling hook (also known as a grappling iron or grapnel) that I made a while back from some stainless-steel rod and a few cable ties worked well enough, but…

The construction of the frame was straightforward and didn’t bog Richard down, but deciding what material to use for the fabric covering did. He was set on keeping the expenses…