Chesapeake Light Craft’s Jimmy Skiff was inspired by flat-bottomed utility boats used under sail and oar for work and transportation on the bay. The design was named not after a guy named James, but after the blue crabs of Chesapeake Bay—the females are called sooks and the males are called jimmies. The original CLC version was developed two decades ago and for almost half of that time designer John Harris has been working on an update to the popular design. The 13′2″ Jimmy Skiff II has the same length as its predecessor, but its beam is up from 50″ to 52″ and the transom has been reconfigured—broader and with less rake—to accommodate a small outboard motor.

The Jimmy II can be built from a kit or from plans. The instruction manual provided for both options is 179 pages long and richly illustrated with drawings and color photographs; there’s no shortage of hand-holding to lead first-time boatbuilders through the process. The last 13 pages of the manual provide instructions for the builders who opt to build from the plans, including details on scarfing plywood and timber to get the full-length pieces required.

Eight plywood panels make up the kit’s hull; its bottom and sides are all composed of two pieces joined together with puzzle joints and the transom is built up of two layers. The CNC-cut parts assure the accuracy of the construction. With the shell of the hull put together, the construction of the Jimmy Skiff II departs from the original design. It has three bulkheads: the forward bulkhead will be part of a flotation compartment in the bow and the other bulkheads will provide support for the side benches/flotation compartments, the new design’s most notable features. The ‘midship and aft bulkheads each have center sections that hold the boat’s shape during construction but are later removed to open up the space down the middle of the boat.

While the original Jimmy had a foredeck enclosing the bow’s flotation compartment, the Jimmy II has that triangular panel set below the sheer. Access to the compartment in the original was through a round port in the bulkhead, which was blocked when the mast was in place. The recessed panel accommodates the hatch nicely and provides a place for where gear can be set when conditions are calm. It also makes a perch that’s more comfortable than the arched foredeck with a small coaming along its aft edge.

The side benches extend from the transom to the forward bulkhead and enclose a generous volume of flotation. The instructions note: “If you plan on using an outboard on your Jimmy Skiff II, you must add foam flotation inside the seat tanks. The U.S. Coast Guard requires it.” The rigid sheet foam insulation shown in the manual assures the flotation compartments keep the boat afloat even in they take on water. If you choose to cruise without a motor, the bench seats, equipped with hatches, offer a lot of protected storage.

For sailing, the benches provide broad seating surfaces that make shifting weight fore-and-aft easy. Between the benches the boat has a 20″-wide passage that’s 9-1/2′ long. Ledges along the benches’ inside faces support slip thwarts that drop into place for rowing. The daggerboard trunk is set inconspicuously in the edge of the starboard bench, eliminating the obstacle created by a trunk set on the centerline. (Read a few of the editor’s thoughts on off-center daggerboard and centerboard trunks in  “Getting Out of Line.”)

The Jimmy II has very good stability, and I was at ease whether I was rowing, motoring, or sailing. I found the open interior plan quite inviting. And familiar. I had designed the interior of two of my boats with side benches, an offset board, and an unobstructed middle; no rocking the boat stepping around a centered trunk, no barking shins on fixed thwarts. For rowing, the slip thwart is easily adjusted to get a comfortable distance from the oarlocks. The skiff wasn’t equipped with foot braces and I always miss having to row without them. In one of my slip-thwart boats I have a footboard supported by a dowel stretcher that sits in fittings secured beneath the thwart-support ledge. A similar arrangement could easily be added to the Jimmy II. Even without foot bracing, the boat, being so light, is easily driven under oars. The optional textured sheet foam in the bottom is a good addition, and provides a bit of friction to push against.

The boat was quick to accelerate and tracked well. I could maintain 3.3 knots at a relaxed pace,  sustain 4.25 knots at an exercise pace, and topped out at 4.5 knots. With a passenger along, I took a seat in the bow and, rowing at the forward station at a relaxed pace, hit about the same speed; exercise pace was 3.9 knots and top speed was 4.3 knots. Solo again, sitting in the center of the boat facing the bow and pushing the oars in the forward locks, I could hit 3.5 knots.

I brought my 2.5-hp, four-stroke outboard along for my Jimmy II sea trials. It’s mount, fortunately, straddled the upper rudder gudgeon and could be securely clamped to the transom. The outboard weighs 37 lbs, just shy of the listed maximum of 40 lbs. I should have had a tiller extension so I could get my weight farther forward to relieve some of the burden on the stern. The slip thwart allowed me to get as far forward as I could and still have a grip on the tiller; the trim wasn’t ideal but the skiff behaved itself, and I hit 5 knots at full throttle. With the motor kicked up, the boat was in good trim when I rowed from the forward station. I brought a passenger aboard to sit in the bow and get it back into the water for motoring and that brought the speed up to 5.3 knots.

The Jimmy II carries a 68-sq-ft leg-o’-mutton sail that’s set with a sprit boom. The forward end of the boom is set well above the tack, so the sail is self-vanging. The snotter is led down to the base of the mast, rather than tied off on the sprit, so it’s easy to adjust the boom while safely seated. For my trials, the wind was blowing offshore and very fluky, switching suddenly from holes that let the sail droop to gusts I’d guess were pushing 15 knots. Fortunately, the side benches made it easy to shift my weight in any direction and I could respond quickly. I placed the slip thwart close to amidships so I could sit there to keep the boat on an even keel in the lulls and use it to slide across from one bench to the other when tacking. With that arrangement I had none of the awkward crawling around in the bottom of the boat that can dampen some of the enthusiasm I have for sailing a small boat. In the gusts, the hull had enough stability to absorb the blows, and I had time to react by easing the sheet and rounding up. When a gust sustained itself, the skiff accelerated quickly and took off. It was a thrilling ride. The boat, as light and as quick as it was, kept me on my toes, but stayed under control.

In the manual, there is the suggestion that Jimmy II can be used for cruising, with the slip thwarts removed to clear the center for sleeping. Designer John Harris wrote, “That would fit my narrow shoulders, but if you were wider you could have a bundle of ‘bunkboards’ to fill in the space between the side seats to create a big berth flat.” That 20″ space would be too tight a squeeze for me, even if I could sleep on my back, taking up the space with my shoulders. I sleep on my side and need to have enough room to draw my knees up, so I’d opt for bunkboards. If you were to make eight more slip thwarts, in addition to two included in the kit, you could cover 7′ of the space between the benches. That makes for a sizable block of lumber when it needs to be stowed, but if you have a thick sleeping pad you can get by with spaced slats, connected by webbing to keep them evenly spaced. (See the IKEA bed-slat tip.) Though a 13′ skiff might seem like a small boat to cruise, in protected waters it can be up to the task if you pack light and pick your weather.

The Jimmy Skiff II is small and simple, yet since its side benches and clear path down the middle of the boat make it easy to move around, it feels much bigger. Its versatility is among its many virtues, and in sheltered waters like some of those in Chesapeake Bay it would prove quite useful. 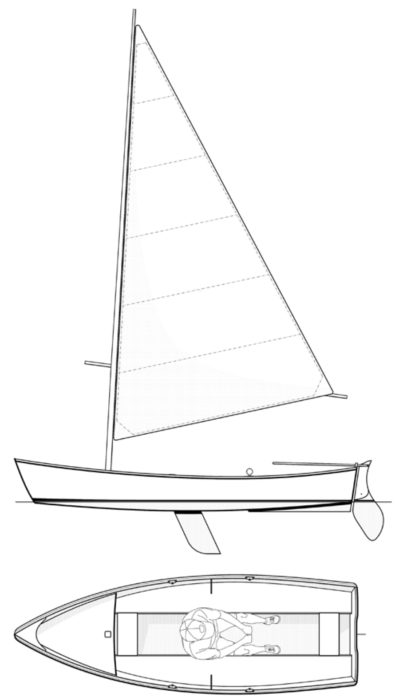 In 2005, when I built a Caledonia yawl for camp-cruising with my two kids, I kept the hull and sailing rig as designed but started from scratch for the interior…

My singlehanded shakedown run in the unpredictable stretch of Mediterranean Sea between Monaco and Corsica had allowed me to make the final adjustments and improvements. My router, Eric Dupuy, understandably,…

A few years ago, I had added some small pieces of high-density polyethylene (HDPE) across the centerline of one of the trailers plywood decks to reduce the friction of bare…

Duct tape is a staple in the kit for shops, camps, and boats, but for many jobs, there’s a better product: gaffer tape. It’s made of heavy cotton fabric and,…