Paul Gartside’s 16′ Gaff Sloop, his Design No. 218, has its roots in SJOGIN, a 22′ traditional double-ended Scandinavian workboat built in the late ’50s. Paul designed a modified version of it, his Koster Boat, Design No. 176, and later developed three smaller versions. The last of them, Design No. 218, is the Gaff Sloop, a 16-footer with a transom stern. When Jonathan Sheldon of Hereford, England, enrolled at the Boat Building Academy (BBA) in Lyme Regis, he decided that this design fulfilled all his criteria for a new boat. He wanted a trailerable, stable, traditional-looking boat that he could sail, row, or motor either singlehanded or with a sizable crew.

Jonathan was keen for the boat to have a cutter rig with a bowsprit, a feature that was present in the Koster. Paul was more than happy to draw a new rig with a bowsprit but thought the boat was too small for two headsails, so the gaff-sloop rig was retained. The mainsail and topsail were adjusted slightly to keep the center of effort in the same place.

The lines were lofted, according to BBA tutor Matthew Law, “using Gartside’s own lofting process, which is to loft the body plan first using all the offsets, including the offsets for the diagonals. Some people only use the diagonals at the end of the lofting process.” The long, fore-and-aft lines were then drawn as a result of which only minimal adjustments were necessary on the body plan. “Gartside’s drawings tend to be very good,” said Matthew.

For two of his iterations of the design, Paul specifies a variety of construction methods such as glued lapstrake, strip-planking, cold-molding, and traditional lapstrake, but he has drawn No. 218 for traditional lapstrake only, built right-side-up so the sweep of the planks can be tuned by eye as work on the hull progresses.

The centerline structure consists of a 2″ x 5″ keel of three laminated pieces, and a 9/16″-thick hog (both in sapele and with a slot for the centerboard), and an oak stem laminated of 13 layers of about 3/8″ thickness each]. The stem was made in two parts: an outer stem and an apron to provide a rabbet for the planking, with enough width in the apron to provide a substantial landing for the plank ends. The laminations were steamed to get them into their basic shape and then left to dry for about three days before clamping on a form and gluing up with epoxy. These centerline components were set up on a base framework along with the 1-1/8″-thick oak transom and 2-1/2″-thick oak stern knee, all of which, along with six temporary molds, were stabilized with struts up to an overhead workshop beam.

The 12 strakes of 3/8″ thick khaya planks were then fitted starting from the centerline, with the forward ends of the lower five planks steamed to cope with the twist as they approach the stem. The wood for the top strakes, which would be finished bright, was carefully selected from two particularly straight-grained boards and set aside before planking began.

For ease of access, the centerboard case was fitted when the planking was partially complete and required making cutouts in two of the temporary molds. Each side of the case was made up of three pieces of 7/8″ sapele, biscuit-joined, and had a 3″-deep sapele log fixed to the bottom, to be bolted through the keel. This, Jonathan thought, was “more efficient and cheaper” than rabbeting the sides into the tops of the logs in the way that Paul had drawn.

With the planking complete, the molds were removed and replaced with three sheer-to-sheer cross spalls to maintain the shape of the hull during the framing. The 1″ x 5/8″ steam-bent oak frames were fitted on 6″ centers. The frames are installed in halves in the bow and stern where the garboards are nearly vertical and amidships where the centerboard is located; the rest are bent in place in one piece.

Next came the ten 1″ oak floors, each made with a limber adjacent to every plank lap, and the 7/8″ x 2-1/2″ oak inwales. The plans called for a cap over the top of the inwale and sheerstrake, but Jonathan left this out because he wanted an open gunwale with the frame tops visible and open spaces between them. To compensate for the loss of structure, he added sapele outwales shaped from 1-1/8″-square stock. The sheer is also strengthened by the rubrail that Paul drew to protect the lower edge of the sheer strake.

The 1″ thwarts (pine in the plans, oak in Jonathan’s boat) rest on risers (the 2-1/4″ x 5/8″ pine in the plans proved difficult to edge-set at the stern so Jonathan used 1-1/2″ x 3/4″ oak) and have lodging knees connecting them to stiffen the hull. Each end of the thwarts also has a pair of vertical knees that extend 15″ inboard and taper down to a very low profile. Paul calls for 7/8″ grown knees, which can be hard to come by, so Jonathan made his with 1″ iroko, in two pieces, half-lapped to avoid weak cross-grain at the ends. Jonathan had been collecting timber from various flea markets, auctions, and odd sales, and he often used that stock in lieu of the lumber specified in the plans.

The floorboards rest on the floor timbers as loose panels for easy removal. They run fore and aft and are bounded by  a fixed, curved perimeter floorboard port and starboard.

I had the opportunity to take a short sail on Jonathan’s Gaff Sloop on the Academy’s Launch Day in gentle Force 1 to 2 winds, which would have been good, forgiving conditions for a first sail, were it not for a disproportionally lollopy chop. There were four of us on board, but at no time did the boat feel crowded, even when we were tacking and each of us had to shift to a new place to sit. Jonathan has sailed with five aboard, including himself, and observed there was still plenty of space. The boat felt comfortingly stable at all times, not surprising given the generous 6′ 9″ beam, the stability provided by the hull form, and the 35-lb lead insert in the centerboard.

In the stronger winds of the day, the sloop was beautifully balanced and I was able to let go of the tiller for a couple of minutes at a time while the boat steered a straight course. When the breeze went lighter, however, I found that there was a lee helm and the boat wouldn’t tack. I put that down to the chop, which I felt was giving us a less-than-fair test, but afterward I contacted Paul about it. He was a little concerned because, he said, “I have the sail’s center of effort right over the spur (the intersection of board’s leading edge and the hull) and normally that guarantees a neutral helm until the boat heels, even on a beamy boat.” He suggested that perhaps crew distribution had put the boat out of trim or the centerboard wasn’t fully lowered. He was right; Jonathan acknowledged the centerboard control lines were not yet set up quite right, and the board was about 90-percent deployed.

At the time of launching it was only possible to row from the central thwart—Jonathan was experimenting with the location of the forward thwart and hadn’t yet installed locks for the forward rowing station. When rowing from the ’midship station, with two others aboard and pulling on the new 10′ oars, it took a bit of effort to get the boat going—it is, after all, big and beamy for a 16-footer–but it then carried its way well. Jonathan and I both agreed that we had to raise the oar handles a little too high when taking a stroke, but this should be easily resolved by lowering the height of the rowlock pads and by replacing the rather long-stemmed rowlocks Jonathan had available with lower ones. Longer oars would help too; a common oar-length formula indicates 12-1/2′ oars would be suitable for rowing, but anything over 10″ would be awkward to stow aboard.

It is to be expected that any new boat’s launching and first sea trial would have some teething problems, but in the case of Jonathan’s Gaff Sloop, christened DUNCAN R, the problems were all human error: the partially deployed centerboard, the choice of oars and oarlocks, and having the topsail set a bit high when the sails were set. But the boat itself, as designed, lived up to Jonathan’s expectations: it was comfortably stable and manageable under sail, singlehanded or with a crew of four or five aboard, and it had the classic look of a lapstrake sailboat. And, he and I agreed, she looked great with the bowsprit which Paul had added. 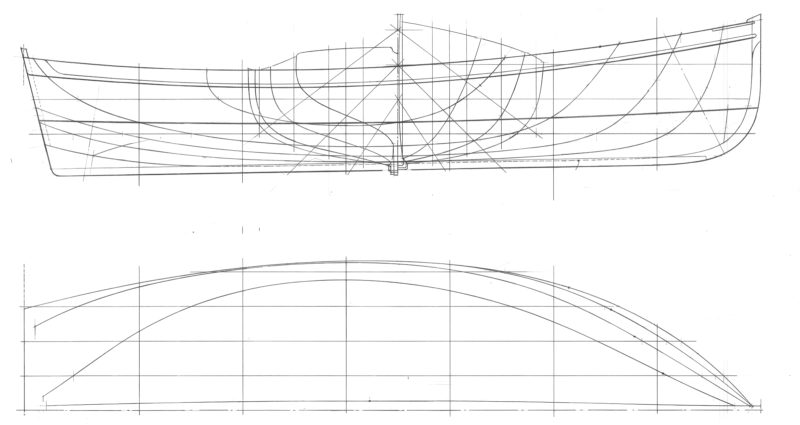 One thought on “A Gaff Sloop”

For a weekend, the waterways were surprisingly quiet, without a single fisherman in sight, and Port O’Connor resembled a ghost town, inhabited by only birds. Gulls hovered in the breeze;…

Rolling a hull of this size is usually an operation that requires a small army of helpers. Working with the gantry cranes doesn’t require so many people; it goes fastest…

The Marlinspike Knife has a hardened 440A stainless-steel 3″ blade with a deep fingernail groove for easy opening. The blade does not lock when open. The frame and pins in…

Detlef Arthur grew up in southern Austria and while he did a lot of boating on lakes and rivers, Italy’s coast was not far away and he occasionally traveled with…