An outboard skiff from Spira

Small boats have been a part of my life from a very early age; over the years I’ve owned kayaks, canoes, and several powerboats. I had often thought of building my own small boat but never had the time or confidence to do so. I did not have much experience as a woodworker and no experience at all working with epoxy or fiberglass. In spite of these limitations, I felt a strong urge to build a small powerboat, something between 16′ and 18′, with room for four, and easy to trailer and launch on my own. A lot of our fishing is in shallow water, so I was leaning toward a flat-bottomed hull, one that would lend itself to rowing at times.

I came across Spira International’s website on a random internet search. Intrigued by some of the designs, I was happily surprised that the boats could be built using construction-grade lumber. The Carolinian Carolina Dory seemed to have the qualities I was looking for. Designer Jeff Spira notes: “The design was taken from the Grand Banks Dories after the advent of power. The built-in rocker hull common to a Grand Banks dory was replaced with a flat bottom which would allow the boat to plane under power. These boats, primarily used for fishing in the inland and near shore waters of the Carolinas, did not require a lot of horsepower to move along at a good clip.”

I ordered the plans in electronic format. They included six easy-to-follow pages detailing framing measurements, chine-log and sheer-plank assembly, transom assembly, and bow specifications. The plans package included a bill of materials, schedule of fastenings, and an illustrated e-book about the construction of the Carolinian. A second e-book, the Illustrated Guide to Building a Spira International Ply-On-Frame Boat, has instructions covering wood selection, fastenings, scarf joints, epoxy, and fiberglass.

The only power tools I used in the construction were a circular saw and orbital sander. All of the lumber was of construction grade—marked “SPF” for spruce, pine, fir. It’s most often spruce, which keeps the boat light. For the plywood, the plans called for 1/2″ exterior construction plywood. I was considering finishing the interior bright with spar varnish, so I paid a bit extra for plywood with an A-grade face, without the football patches found with B-grade. All joints were glued and screwed as instructed in the plans, using stainless-steel screws to secure all frame joints and the attachment of plywood to the frames. All screws were countersunk and sealed with epoxy. I deviated from the plans and used Gorilla construction adhesive instead of epoxy on all frame joints and the transom frame. It made the construction much simpler because it required no mixing. I also used the adhesive on the chine-log and sheer-plank scarf joints. The Gorilla adhesive held well and none of those joints failed when bending those longitudinals. [Editor’s note: Gorilla Glue is rated as “Waterproof, Passes ANSI/HPVA Type I.” This polyurethane adhesive first came on the market in 1999, and it’s not clear yet how it holds up over time or during prolonged immersion. Marine epoxies have proven reliability for use in boats.]

The frames are constructed with 2x4s using a jig set up on a sheet of plywood. The transom is framed with 2x4s with a piece of 2×8 at the motor mount, and its 1/2″ plywood face is glued and screwed in place. A straight strongback supports the seven frames, the transom, and the stem—which is cut from a 2×8. Joined to these pieces are a 2×6 keelson and the 1×2 chines and the sheer clamps. When the framework is finished, 1/2″ plywood is bent around the sides and the shape traced along the sheer clamp and chines. It takes three pieces to cover a side from stem to stern; they’re joined with butt plates that are attached with glue and screws while the side panels are in place on the framework. The 1/2″ plywood bottom goes on last, its shape traced along the side panels. Rubrails of 1×3 strengthen the sheer.

Among the elements I added that were not included in the plans were an oak breasthook installed beneath the plywood foredeck and a 1×3 oak keel running the full length of the bottom. The breasthook provides additional strength to the bow for lying at anchor and loading the boat onto the trailer; the keel improves tracking for motoring at slow speeds and rowing.

The plans called for the entire boat to be sheathed in 6-oz fiberglass cloth set in epoxy with a second layer added to the bottom for boats that may be beached. I chose to use 7.5-oz cloth with layers doubled up at all of the seams.

As with all Spira designs, finishing the interior is a personal choice. I chose a split seat in the stern to allow for operating the boat from a standing position, which is sometimes required when running slowly through the inshore waters of Florida’s Gulf Coast where we spend time in the winter. I installed a rowing bench amidships and left the bow open for a folding deck chair which can be stowed when fishing. I used white cedar for the seats and floorboards and finished it with an oil-based semigloss spar varnish.

My boat will not be in the water for long durations, and with the exception of our time in Florida, will spend all of its time in fresh water. I painted the exterior with commercial-grade oil-based rust-inhibiting paint. Applied with a foam roller, it went on very nicely with five coats on the bottom and three coats on the sides and transom.

I completed the Carolinian project, including making 9 1/2′ oars, in 350 hours.  The boat trailers very well; for its maiden voyage we towed it 1,200 miles from Ontario to Florida.

The boat has performed extremely well, meeting and even exceeding many of my expectations. Powered by a 20-hp Mercury ELPT (Electric Start, Power Trim) with 20″ shaft, it comes up on plane quickly, has a top speed of 28 mph, and cruises comfortably in choppy water at 15 mph. With two occupants aboard, the boat draws less than 5″, and the power trim diminishes the draft to allow for navigation in very skinny water; the power trim also keeps the bow down when going fast. I have installed the full-sized 40-lb marine battery beneath the port stern seat, and this is balanced quite nicely with the operator on the starboard side. Under full power the hard chine causes the boat to respond very quickly to the tiller; my first time experiencing this caught me a little off guard, but it was easy to adjust to. Trimming up the bow helps to lessen this quick response, which is another benefit of a power-trim motor.

I added oarlocks because I thought they were a must for a dory. The Carolinian tracks well while being rowed, and while I row mostly for the pleasure of it, the boat has a satisfying speed under oars.

The hull is stable. I can stand on the gunwale and not have any sensation that the boat is about to tip. My wife and I have moved to the same side of the boat to land fish without feeling the stability has been compromised.

I especially enjoy the Carolinian at 15 mph, listening to the sounds of waves running along the wooden hull of this beautiful boat. I have named the boat the JACQUES-YVES after my childhood hero, the marine conservationist Jacques Yves Cousteau. It was fitting that on her maiden voyage, two dolphins swam with us for at least a quarter mile. JACQUES-YVES promises to provide many hours of enjoyment to come.

Bill Smeaton is retired and living in the village of Beachville in southwestern Ontario. He started his career as a commercial diver, followed by a 32-year career with a large electrical transmission and distribution utility. He and his wife Laurie have two sons and four grandsons. They are avid fly fishers and enjoy spending many hours on lakes and streams throughout Canada and the United States. 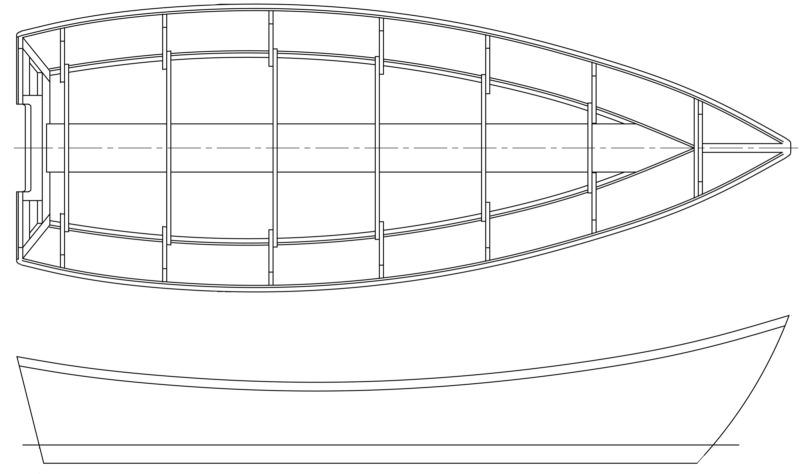 Update: Jeff Spira passed away unexpectedly in the spring of 2022. His website is no longer operating and it is presumed that his boat plans are no longer available.

I came across Spira International’s website on a random internet search. I was intrigued by some of the designs and happily surprised that the boats could be built using construction-grade…

The Vermont Dory was first developed by AGB in 2004 to build upon the abilities of the original guideboats that had been in use in the Northeast since the 1800s.…

My plan was to head northeast across Sabaskong Bay and into Turtle Lake, a connecting bay with an entrance channel so narrow that its opposing shores merged into a single…

Some sawhorses I’ve used were built bull-strong for house construction; others were so feebly put together that they quickly became kindling. The style I like most is based on a…

This Type-III PFD is available in XS/M, L/XL, and XL/XXL to fit chest sizes from 30″ to 56″. Because we prefer bright, easily seen colors, we chose the all-red version;…

I did trials to see how the Mini compared to my familiar stoves. With the air temperature at 46 degrees Fahrenheit and the water from the tap at 52 degrees,…