Frank Pedersen is a man of enthusiasms. Before setting out on a new boat project in 2002, he had owned a variety of modest-sized boats in his days, and he had also built a Wayfarer dinghy for himself. Over the years, he had gained enough experience to know what he liked and wanted in a boat. He studied hull forms, especially those of planing hulls, and when he felt ready he set out on a quest to design one for himself.

He wanted a hull that would be fast, that would plane when the wind conditions were just right, something that would give him the thrill of surfing down the front of a following sea. At the same time, simplicity and low cost remained constant priorities for him. “I read everything I could find,” he said, and began working up some preliminary sketches.

At the same time, Brion Rieff’s boatyard in Brooklin, Maine, had just moved to a new location, a much larger building than it had previously occupied, with plenty of space to grow. Pedersen talked with Rieff about his ideas, and Rieff consented to have him build the boat in a then vacant space in the boatyard’s loft. With Rieff looking over his shoulder, so to speak, and offering advice on scantlings and construction techniques from time to time, Pedersen set to work. The boat would be for his own use, but he had in mind the development of lines plans for other amateur builders, with expanded mold outlines and plank shapes. Perhaps, in the long run, he could develop a kit of pre-cut parts.

The kit prospect hasn’t panned out yet, but the result of the design and construction is WINDSPRITE, a 26′ multichined boat built of plywood and intended to be simple, inexpensive, and yet exciting to sail. He’s calling the design the WindSprite 26, and lines plans with the amateur in mind have been completed.

He used 50 sheets of okoume plywood in the construction, and plywood is far and away the predominant building material in the boat. Below the cabin sole, the construction is “egg-crate” style, with longitudinal and athwartships plywood bulkheads giving rigid structural support for the planking and making for a very stiff hull. The longitudinals form something like a fore-and-aft girder. Pedersen laminated the frames of his prototype, but the frames, too, could be made of plywood. All the parts, of course, are epoxied together and the hull is sheathed in fiberglass cloth set in epoxy.

In traditional flat-bottomed or V-bottomed boat construction, a chine is the angle where the bottom planking and the side planking come together. Typically a chine log, a kind of longitudinal stringer, supports the joint and receives the plank fastenings. Because plywood can’t bend to the same complex curves that traditional construction can accept, a design using more than one chine—“multichine”—allows plywood to emulate the lapstrake planking of a round-bottomed hull. In the WindSprite 26, the planking is 3⁄8″ plywood, with stringers backing each chine joint for the length of the hull. The keel “plank,” or the relatively small area of the bottom of the hull that is flat, is doubled in thickness, as is the transom. She has a fixed fin keel, which necessitates hauling the boat in slings to set her on her trailer.

The boat is light for a 26-footer, at 2,700 lbs of displacement. By contrast, the modified cold-molded Paul Gartside double-ender ELF (see page 96), with substantially more equipment for its completely different purpose of comfortable cruising, displaces more than 5,000 lbs for its shorter overall length of 24′. WINDSPRITE’s light weight makes her a responsive sailer. She’s quick to answer the helm and comes about very smartly from one tack to another. Those who grew up racing Lasers or C-Larks would feel right at home here—minus the wet ride. Her high freeboard keeps her dry, and Pedersen observes that the multichine construction tends to deflect spray. She’s meant for, as Pedersen describes it, “performance daysailing.”

At the helm, Pedersen himself beams with excitement when the boat picks up speed on a reach, and he seeks out opportunities to show how well the boat can take advantage of waves for a little extra boost off the wind. He’s in his 70s, but when a good breeze is up and the boat is sailing well, he’s like a kid on a carnival ride. She’s fast—in one recent outing in a lovely fresh breeze, our GPS showed she was routinely hitting 6.9, 7.2, as much as 7.4 knots without feeling any need of reefing the mainsail. Her large cockpit (8’6″ long) gives the sense of sailing a much larger boat. She has a seven-eighths fractional sloop rig, but she also flies an asymmetrical spinnaker on a short retractable bowsprit. Pedersen is the first to say he isn’t a hell-bent, ride-the rocket kind of racing sailor. He takes his joy in making the boat move well, and, as may be truly said of many a performance craft, the boat can probably take a good deal more weather than the sailor cares to. Her low trunk cabin allows ample working room on deck and good visibility forward. With roller furling and with the working lines led to locking fairleads on the aft end of the coach roof, all her lines except the halyards can be very easily managed from the cockpit.

But Frank has done his share of racing with WINDSPRITE, too. She has performed remarkably well. In the 2006 Maine Retired Skippers Race in Castine, she was eighth in a fleet of 42 boats. On corrected time in the 2006 Eggemoggin Reach Regatta in Brooklin, she finished in a respectable position, 13th out of 19 in her class. Not a bad showing at all when you consider that she sailed in company with some of the most recent cold molded racer-cruisers from places like Brooklin Boat Yard and Rieff’s own yard. Those other ERR fleet boats are all elegant in their perfection of long overhangs, lovely curved and raking transoms, the best materials available, cold-molded construction, high-end electronics—and with the price tag to match, too. WINDSPRITE bears them little resemblance, with her very high freeboard, straight stem raked forward only slightly, aluminum spars, Dacron sails, and plain-vanilla cabin. Her transom, especially, is an anomaly, being very broad, very high, and almost perfectly vertical, like a racing dinghy’s transom writ large. A person would be hard pressed to call it lovely, and none among the legions of rapturous boat poets would linger on its sensuality. But it has to be said that this boat isn’t about looking pretty at the mooring. It’s about the enjoyment of handling the boat. Frank deliberately left the transom broad so that the runout would provide ample buoyancy aft and contribute to WINDSPRITE’s planing abilities.

The vertical transom makes her outside-mounted rudder a very simple device. She has no inboard engine (and no expensive systems, either), so when the wind fails Pedersen uses a 2.5-hp four-stroke outboard to get her home at about 5 knots. The outboard is stored in a compartment under the starboard cockpit seat and is mounted on a simple bracket—another good justification for that dead-vertical transom. He sails on and off a mooring, and so far he hasn’t had much call for the outboard. The boat balances very well on the mainsail alone after the jib has been rolled up to clear the foredeck so the crew can comfortably fetch the mooring pennant.

The accommodations are ample for two, if spartan. No doubt an owner would find his own ways to trick it out with a few of the comforts of home. The plans show two portlights per side in the trunk cabin, but Pedersen hasn’t seen the need for them and saved expense by doing without.

The key aesthetic of this boat is its simplicity. Frank estimates his materials cost at about $18,000, or less than the price of a mainsail for some of the larger “spirit of tradition” boats he sees in the races. He spent about 1,500 hours on her construction, which he completed entirely on his own. 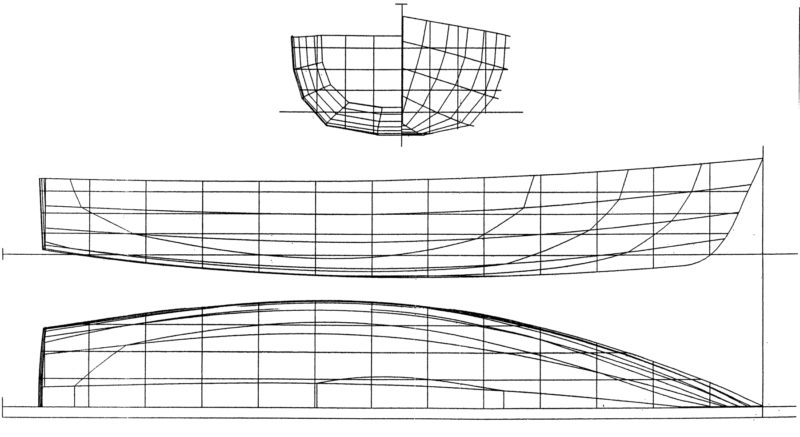 This Boat Profile was published in Small Boats 2007 and appears here as archival material. If you have more info about this boat, plan or design please let us know in the comment section.

Sailors want wind; rowers don’t. Rough water can be a challenge to a rower’s skills, but I’ve found a few techniques that can help you reach a safe haven when… 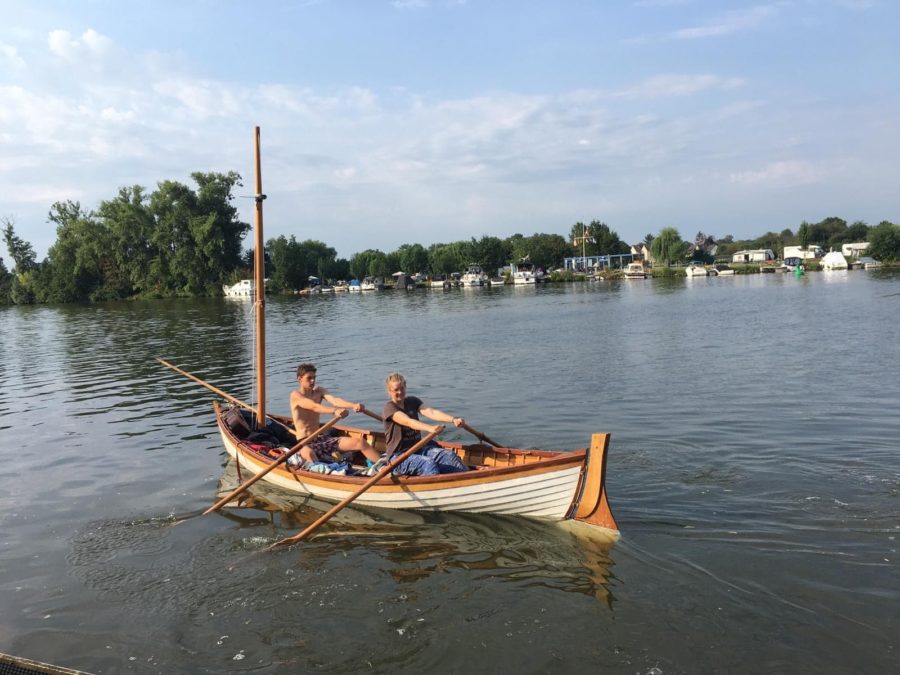 To the Black Sea – Episode 1