Clint Chase of Saco, Maine, designed the Deblois Street Dory in the spirit of New England’s dories. The lapstrake hull, and graceful curve of the bow, the tombstone transom, and low sweep of the sheer are all Swampscott dory.

The first of the DSD dories was built in 2010. A few years later, at Maine’s annual Small Reach Regatta, Clint met JR and Mary Krevans, a couple from Bar Harbor, Maine. They were thinking about a new boat to build, one which could be rowed and sailed with ease, and keep up with the Caledonia yawls in the regatta. Clint modified his original Deblois Street Dory design slightly to fit JR’s and Mary’s needs by making it better suited for sailing. He kept the length at 18′8″ and the beam at 4′10″, but widened the flare on the frames in the stern to make the boat stiffer under sail and able to carry cruising gear. He also drew a bigger standing lug rig with a sail area of 90 sq ft. JR built the boat from a kit and launched it in 2015. The modifications became the current form of the boat.

The kit provides CNC-cut marine plywood pieces; additional kits are available for the hull and spar timbers, the hardware and the epoxy. The 34-page manual included has detailed step-by-step instructions illustrated with color photographs and drawings. For JR, “the kit components fit perfectly and the directions were clear.” The kit’s stem, frames, and transom are all made of multiple layers of precut plywood. Screws driven into predrilled holes keep all the pieces from sliding out of alignment when gluing the stacks together.

Clint, inspired by John Gardner’s The Dory Book, wanted the DBD to be faithful to traditional dory construction, so assembling the hull begins with attaching the stem, frames, and transom to the bottom before setting that structure upside down on the kit’s precut plywood strongback. The 9mm okoume planks for the dory’s five strakes come in two pieces for the garboards and three pieces for the rest. The CNC-cut joints have three steps, with interlocking puzzle joints in the middle step, which will be invisible when assembled. The exposed edges of the joints are gently wavy, to avoid weakening the joints and present a more subtle glue line for a bright finish. Builders working from plans are provided with measured drawings for the planks; no spiling is required. In keeping with traditional construction, builders will cut bevels and gains in the planking laps before securing them with epoxy; battens and temporary screws hold the laps closed while the epoxy cures.

JR noted: “My previous boatbuilding experience was four kayak kits and a 15′ dory, all stitch-and-glue construction. My building time for Deblois Street Dory was about 300 hours spread over six months.”

The interior is outfitted with three thwarts in typical dory fashion. Airtight tanks in the ends provide buoyancy. The plans include drawings for a daggerboard and a centerboard, both with blades made of three layers of plywood and sheathed with 6-oz ’glass, and a fixed rudder made of laminated plywood. JR built his dory with a daggerboard trunk and used solid white oak for the board. There are drawings for a fixed rudder and for a rudder with a pivoting blade. JR opted for the latter. Whether making the board and rudder blade from solid wood or laminated plywood, the plans and kit include templates for giving them effective foil shapes for low drag and better windward performance. The mast and yard on JF’s DSD are carbon fiber and weigh altogether less than 8 lbs. The plans give the necessary details for making the spars of Sitka spruce or eastern white spruce—solid spruce for the yard and boom; hollow bird’s-mouth construction for the mast.

The DSD “trailers easily and is narrower than our Subaru Forester so visibility and tracking are good,” according to JR. “At the ramp, the flat bottom is easy to load on and off the trailer.” I joined JR for a sail on Mount Desert Island’s Somes Sound and I was impressed, once the boat was afloat, by how rapidly the mast, lug, and sprit boom could be raised in one 30-second swoop, and how quickly we could leave the dock, which was 30 seconds after that.

JR finds the dory “initially a little tender, but the flare carried back from frame 3 to frame 5 allows great use of the skipper’s body position to keep her steady. The hull is only about 220 lbs empty and we do not carry ballast, so the crew does definitely need to balance the boat.”

JR and I sailed out in 5 to 10 knots of wind, and I immediately felt like we were sailing in one of the modern racing dinghies of my youth, but, miraculously, we were also staying dry. We zipped around in the protected cove at the head of Somes Sound at up to 5 knots. The sprit boom is self-vanging and set high enough so it’s not likely to hit you in the head during an unexpected jibe. Closehauled, the DSD tacks through about 100 degrees. “Going off the wind in a breeze,” notes JR, “the hull starts to lift in the water and exceed 5 knots; that is the only time I feel a need to put down my coffee cup and keep weight low.”

I quickly got a sense of its excellent responsiveness. The boat reacted to every minor adjustment of the tiller and weight shift, tacked and jibed with ease, and came to a quick stop when luffed into the wind. JR finds that there is only minimal weather helm unless the DSD is sail-heeled well over. On a couple of occasions he and Mary sailed the lee rail under, but the dory rounded up nicely and took on very little water.

Though we didn’t need to reef, JR showed me the process, which took us only three minutes to lower the sail, reef, and raise it again. Color-coded lines eliminated confusion from the loose ends clustered on the floorboards. JR and Mary generally put the first reef in at about 10 knots of wind. They take the dory out in anything up to 15 knots, but they are double-reefed at that speed. When sailing downwind in heavier winds, they have an 18-sq-ft storm sail made from a tarp. JR reports they’ve “put three people on the windward rail and nothing has given out yet.”

We could switch from sailing to rowing within a minute or two; the sail and spar easily fit in the boat off to one side. JR designed a plug that goes into the daggerboard trunk to help prevent water from splashing up through the slot. The plug projects below the hull about 1″ and is about 1 1/2′ long, creating a skeg of sorts that helps the boat track better while rowing. The dory glides along quickly with a low effort on the oars; rowing was very satisfying. JR has measured speeds around 3 knots with one person at the oars and up to 4 knots with both of them rowing over a distance. The blade of the rudder kicks up with a pull of a line next to the tiller, to allow the boat to navigate shallow waters.

JR and Mary have had their Deblois Street Dory, POLARIS, for six years now and in most conditions, they are able to keep up with the Caledonia yawls while rowing or sailing, falling behind only in heavier winds. Clint has joined JR and Mary a couple times, including for a 42-mile circumnavigation of Mount Desert Island, which took them about 13 hours. JR and Mary always carry a fair amount of gear in the boat, including extra safety gear, a throw rope, two bailers, and extra flotation in the form of a couple of big fenders. They find that they can sail the boat with a complement of three and some safety gear, or just the two of them and a lot of camping gear. They often beach the boat by rolling it up above the high-tide line on the large fenders.

After rowing and sailing the Deblois Street Dory, I came away thoroughly impressed. The boat’s aesthetics are rooted in tradition, but it moves with the quickness of a modern racing dinghy. I think the DSD would be an excellent boat for a single person, a couple, or a young family to enjoy in a variety of ways—from day sails in moderately protected waters to overnight coastal camping trips. JR and Mary enjoy the versatility of the boat, from rowing to sailing for the day, to loading it up with gear and going camping for a couple days along the coast and among the islands. “The hull is supremely seaworthy,” notes JR. “Using the boat is a joy.”

Arista Holden is a longtime seamanship instructor for programs including Outward Bound, NOLS, Atlantic Challenge USA, and WoodenBoat School. She is a frequent contributor to WoodenBoat, and is at work compiling a book about the Apprenticeshop and its founder, Lance Lee. She holds a 100-ton USCG license and lives in Belfast, Maine. 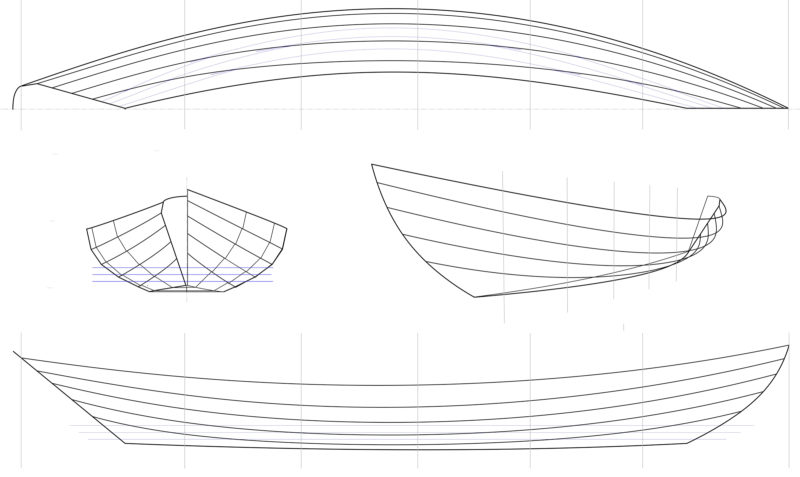 Plans and kits for the Deblois Street Dory are available from Chase Small Craft. Plans are delivered as a digital download and are priced at $250. The complete kit is $6,821.

layton Wright, who built the pedal-and-propeller powered skiff featured as our Reader Built Boat in this issue, put an extraordinary effort into inventing a drive system for the boat only...

A Tale of Two Boats

A 7-1/2-page article published in a 1962 issue of Popular Mechanics might seem, by any standard, to be an insufficient guide to building a boat, but Terry McIntyre built the…

While roller stands make it easier to rip long boards on a table saw, a do-it-yourself roller made of a 2x4, fender washers, and joist-hanger nails work for ripping and…