A trailerable keelboat for camp cruising

Some 38 years ago, after a short career in the American Merchant Marine, my need to be on the water prompted me to begin looking for a small sailboat. At the time, I was living on a tidal river that had low bridges between me and open water, so I needed a boat with a mast that could be lowered easily. A friend told me about a Drascombe Scaffie, as the Devon Scaffie was then known, that was for sale in Portland, Maine. It turned out to be the perfect boat for my situation and now after thousands of miles, I am still sailing this very enjoyable and versatile boat.

The Scaffie was designed by John Watkinson, founder of the Drascombe line of small boats, and has been in production in the U.K. since 1978. It is 14′9″ long with a beam of 5′9″ and, at 462 lbs fully rigged, ideal for trailering behind even small vehicles. Its 15″ draft allows access to almost any waters. The boomless standing lugsail has an area of 100 sq ft. Two uprights are set in sockets in the stern and support a shoulder-high rope traveler above the tiller. The mainsheet is led through a block on the rudderhead, then led forward along the tiller where it can be cleated or gripped with the tiller.

A full keel, along with twin 36″-long bilge keels, leaves the interior of the Scaffie uncluttered by a centerboard trunk for added comfort and ease of movement in the cockpit.

A trailer to transport a Scaffie will generally support the full-length keel with a few rollers and outboard bunks to support the hull between the keel and bilge keels. It takes less than 15 minutes to rig the unstayed mast and sail to be ready to launch. Upon returning to the ramp, securing the rig and loading it onto the trailer is quick and easy. The mast partner is equipped with a gate, so the mast is set in the step, pivoted, upright, and locked by the gate. It is much easier than having to lift the mast to drop through a conventional partner. The partner has cleats for the halyard and the tack’s downhaul. There are two wooden rowing thwarts and molded fiberglass side benches with flotation that can accommodate up to four people.

It takes only a light wind for very relaxed sailing. In steady winds under 14 knots the boat is dry and an absolute delight to sail. The Scaffie was drawn with two reefs to reduce sail when the wind picks up. When I’m sailing solo, I set the first reef at around 14 knots. When double-reefed, the Scaffie can handle steady winds up to 20 knots, especially when there are two or more sailors aboard; that makes for very exciting sailing and you can expect to get wet.

Any small open boat is at risk to be swamped in certain wind conditions and the Scaffie is no exception, even when double-reefed, but with good judgment it can be avoided. In 38 years of experience, I have completely swamped my Scaffie only two times, but the boat remained upright and didn’t capsize. On both occasions the wind was strong and very gusty. The foam-filled molded flotation compartments kept the boat afloat and it only needed to be righted, bailed out, and I was back on my way.

In my logbook is a passage that demonstrates the Scaffie’s extraordinary seaworthiness. I had spent a night high and dry on Steve Island south of Stonington, Maine; the forecast for the following day was for small craft warnings with winds to 20 knots or more from the southwest. The wind was already picking up. Staying among a group of islands that did not provide enough shelter would make for an uncomfortable day, and the best shelter was over 10 miles away with 8 of those miles crossing the open waters of East Penobscot Bay.

With the sail double-reefed, I set out into the bay one hand on the tiller and the other on the mainsheet, closehauled on a port tack. The wind was already at 20 knots or more and seas running up to 4′. Whitecaps were everywhere and one broke against the side of the boat. Spray filled the air but the Scaffie remained steady and rose to the crest as the wave rolled under the hull. For almost two hours, beating on one long tack, the Scaffie averaged 4.6 knots to windward into a heavy sea and took on very little water. At the time, I was in my early 50s and had 12 years of experience sailing the Scaffie. Now 77, I am still confident in my ability to handle this amazing little boat, but I avoid days when the wind is predicted to be 20 knots or more.

The Scaffie normally carries one set of oars and is rowed solo from the forward or the aft station to maintain the best trim. A speed of 2 to 2 ½ knots can be comfortably maintained with the rudder set to ’midship. When not in use, the oars are stowed on the centerline under the thwarts.

An outboard of 2 to 3 hp can provide auxiliary power. The engine well is inboard making access to the outboard convenient and safe. The well is open aft so the outboard can pivot over obstructions as well as be kicked up for rowing and sailing, rather than removed. Scaffies are molded with a well but can be ordered with the opening in the hull not cut out. The Scaffie will cruise with the 2.5-horse at about 4 knots when set at half throttle for best fuel economy. The well is offset to port far enough to permit the use of the rudder for steering while under power.

With simple modifications for overnight, the Scaffie makes an ideal solo beach cruiser. There is plenty of space along the centerline in the bottom of the boat to lay out a pad and sleeping bag, but with such an arrangement there is limited space for gear. My solution has been to replace the thwarts with a 6′-long platform level with the side benches. It provides plenty of room for sleeping with a hatch in its center to provide access to gear stowed below. Crutches installed fore and aft support the mast as a ridgepole, for a cover to provide shelter from the elements.

Most of my overnight and multi-day cruises are on the coast of Maine where the tides are up to 10′. In some locations, I anchor in deep water to stay afloat through the tide cycle; in others, I like to plan overnight stays with high tides in the evening and in the morning, and set the Scaffie parallel to a soft bank to rest on the center keel and the shoreside bilge keel when the tide goes out. The bilge keels are not at the same depth as the center keel, so the Scaffie is made level by coming to rest across a gentle slope. Since the bilge keel on the water side doesn’t make contact with the ground, lines from the bow and stern to shore are tensioned as they are tied off to keep the boat secure and prevent it from rolling away from the bank. The rudder doesn’t extend below the keel line so it can remain in place when beached.

The Scaffie is built to last and doesn’t require a lot of maintenance. Mine has always been kept inside when not in use, and at the start of each sailing season, I treat the inside and outside of the hull with fiberglass color restorer that provides UV protection and resists stains. The gelcoat on my nearly four-decade-old Scaffie is still shiny with only minor scratches. Every three or four years, I put a coat of spar varnish on the hardwood trim, tiller, mast, and oars. I am still using the original sail. This is a testament to the lasting quality built into this boat.

After 38 years of sailing the lakes, rivers, and bays of coastal Maine, I trailered my Scaffie to northeast Florida and we will begin to explore the sheltered waters of the St. Johns River, yet another chapter in the adventures of Scaffie hull #109. I take great comfort and security in the boat and enjoy all three ways of propelling it. If you like sailing, rowing or motoring, the Scaffie can do it all.

Tom Hepp has spent most of his life around boats and water. He is a veteran of the U.S. Navy and Merchant Marine and has worked professionally as a boatbuilder for over 10 years. He spends summers on the coast of Maine and winters near the St. Johns River in northeastern Florida. He designed, made cardboard mock-ups of, and built two take-apart pirogue-style boats (see “Nesting Boats”) to take in his van during summer vacations. 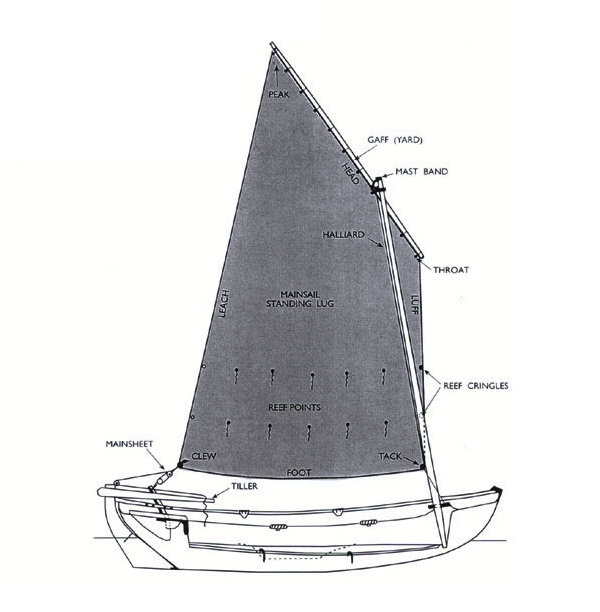 layton Wright, who built the pedal-and-propeller powered skiff featured as our Reader Built Boat in this issue, put an extraordinary effort into inventing a drive system for the boat only...

A Tale of Two Boats

A 7-1/2-page article published in a 1962 issue of Popular Mechanics might seem, by any standard, to be an insufficient guide to building a boat, but Terry McIntyre built the…

While roller stands make it easier to rip long boards on a table saw, a do-it-yourself roller made of a 2x4, fender washers, and joist-hanger nails work for ripping and…