For anyone interested in seaworthy small boats for cruising or daysailing, John Welsford’s designs are hard to beat. There are several elements that combine to create what I think of as a typical Welsford boat: a narrow flat bottom, lapstrake sides over sawn plywood frames, high volume with generous freeboard, half-decked with sealed chambers for built-in buoyancy, rugged construction, and an appealing, pugnacious character inspired in part by the traditional small boats of Great Britain and northern Europe. There are few double-enders in his design catalog, despite their popularity among home builders, and that makes the Sei (pronounced “say”—named after a species of baleen whale) a welcome addition.

John’s impression of today’s popular double-ended rowing and sailing boats around a 15′ size, wasn’t entirely positive. He thought the type could have more stability, be less prone to pitching, and perform better under oars and sail. As he does with many of his designs, John looked to traditional hull forms for inspiration. 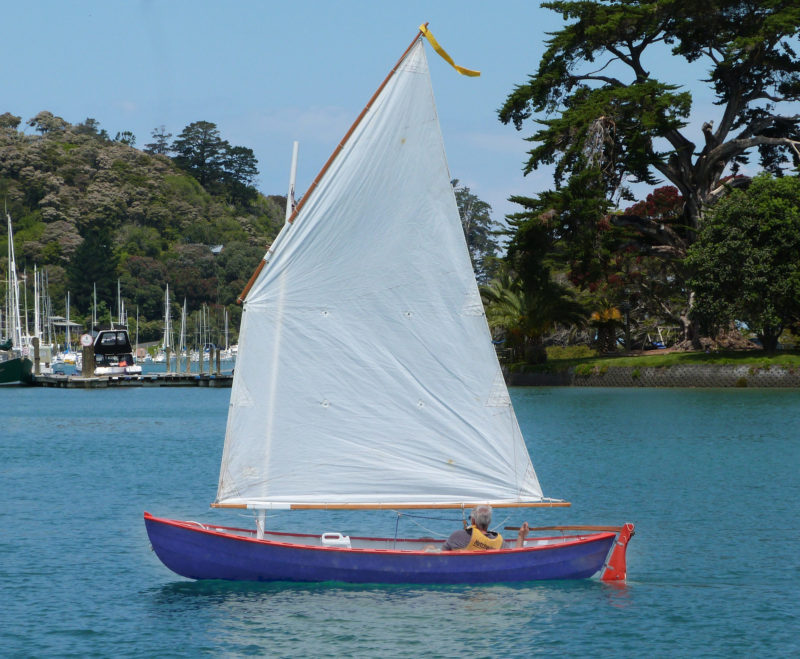 Photographs by the author

Like many of Welsford’s small-boat designs, the Sei combines a relatively narrow and flat bottom panel with three strakes of glued lapstrake planks over 1/4″-plywood frames. The hull is built upright on a simple waist-high jig, a feature that will be appreciated by anyone who has ever crawled under a boat to clean up dripping epoxy while planking. Unlike other popular Welsford designs like Walkabout and Pathfinder, the Sei doesn’t use permanent stringers along each plank edge—the plank laps themselves produce adequate strength and stiffness, as well as a lighter boat.

With so little structure, the Sei would be a straightforward, relatively simple build well within reach of first-time builders who are willing to learn as they go. Dimensioned drawings are provided for most of the boat’s components, so lofting isn’t required. The plans provide full-sized templates for the rudder and daggerboard, which have foil sections designed to produce good hydrodynamics.

While the Sei is not a cartopper, the hull is light enough that I could easily pull it by myself onto a dock, or slip it back into the water. The light lapstrake hull has internal structures—sealed buoyancy chambers fore and aft, rowing thwart, daggerboard case, and mast partner—that provide additional stiffness. I had been wanting to sail a Sei ever since I watched a video clip of the little double-ender on YouTube. In it, John is at the helm, seated low in the boat with the tiller over his shoulder, weight well back for optimal trim, and the Sei is running easily downwind. The balance lugsail, a rig featured in many of John’s small boats, is sheeted square to the hull to catch the following wind, and the boat is moving well and passes another lug-rigged boat, a Welsford-designed Saturday Night Special, on a parallel course. The SNS is fast and designed specifically for speed off the wind; it’ll start to plane in anything much above 10 knots of breeze. But in the conditions captured in the video, the Sei is easing ahead of it. There isn’t enough wind for the SNS to really get up and go, but still, I thought, the Sei might be worth a look. I paid a visit to John in New Zealand not long afterward, and got my chance to try it out. 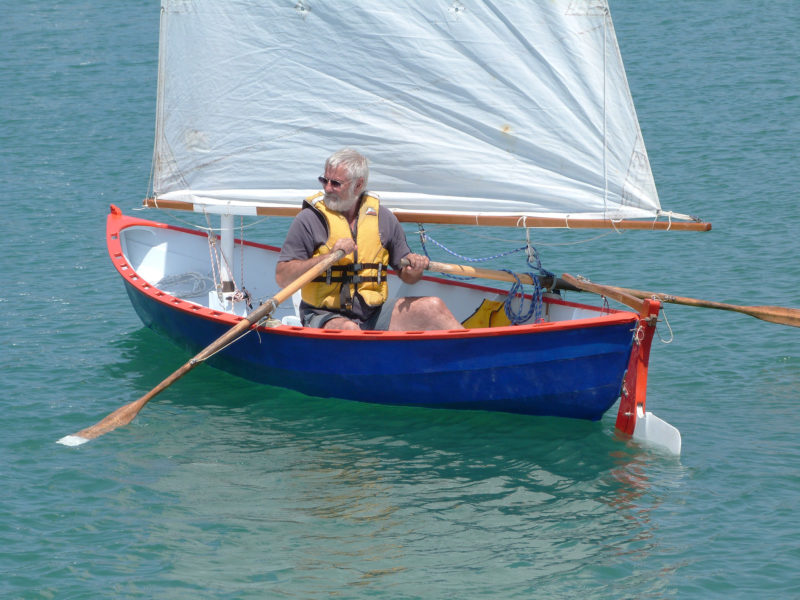 Designer John Welsford, seen here at the oars, rows several hours every week for exercise. He designed the Sei to row well not only for auxiliary power, but for pleasant outings when the sailing rig is left ashore.

The Sei is an excellent performer under oars. I spent a morning rowing up a tidal estuary, slipping along with barely any effort. The tide was dropping, leaving the edges of the river shallow enough in places that the blades of the oars were hitting the bottom on each stroke, but that was no challenge to the Sei’s 6″ draft. With the mast, rig, and rudder left behind, the boat was well under 200 lbs. I felt like I was riding a windblown leaf. The Sei is nimble and quick for easy maneuvering—pull one oar and it spins 180 degrees—and yet it tracks well, thanks to the keel and skeg. The ergonomics are well suited to long rows. The rowing thwart is positioned for proper fore-and-aft trim and is high enough to be comfortable seating. I could have gone on rowing all day.

With its flat bottom and wide beam, the Sei was stable enough in flat water for me to stand up in and move around with reasonable care. That’s a big asset for cruising, where long days aboard may be required. And with no transom, the boat shouldn’t drag too much with a passenger in the stern seat. Plans call for 8′ 6″ oars, which will move the boat efficiently and still stow aboard without much fuss.

The Sei carries its beam well aft, which, combined with the fine entry, creates a noticeable fore-and-aft asymmetry. “When sailing a small boat, the crew weight tends to be aft of ’midships,” Welsford says, “so it pays to have the boat’s center of buoyancy in the right place to support this weight. This gives a very fine entry and a fatter stern, which much reduces pitching while sailing upwind, and also makes the boat more stable.” And, with the beam much narrower at the waterline than at the gunwale, the center of buoyancy moves very rapidly as the boat heels, quickly increasing the resistance to further heeling. Despite the Sei’s flat bottom, the fine entry minimizes pounding, and thanks to “some trickery with the rocker” as John explains it, the boat leaves hardly any wake—a sure sign of a slippery hull. 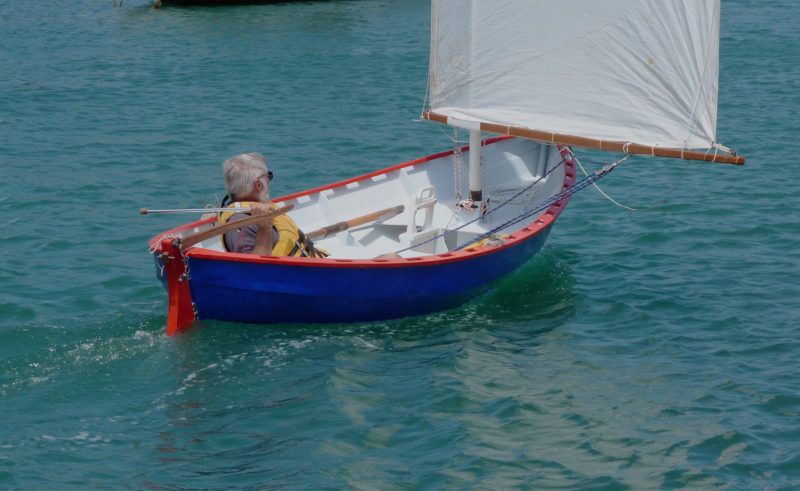 The daggerboard, seen here partially raised for less drag on a downwind run, is within easy reach of the sailor and its short case doesn’t overly compromise the seating area.

Of course, any lightweight unballasted boat can be capsized, even one with as much inherent stability as the Sei. In his capsize testing, John confirmed that the sealed buoyancy compartments in the bow and stern will keep the boat afloat, while foam blocks strapped under the rowing thwart provide enough additional lift to make the Sei easily recoverable from a knockdown, even in conditions likely to cause a capsize in the first place. The boat’s buoyant wooden mast and yard prevent turtling—another advantage of the balance lug rig.

I didn’t have the chance to take the Sei out cruising, but I did manage to wrangle a couple of hours at the helm under sail. With the unstayed mast and simple balance lug rig, setup time was minimal. Ten minutes after backing the trailer down the launch ramp and sliding the boat into the water—a task made easy by the flat bottom—the boat was ready to sail. 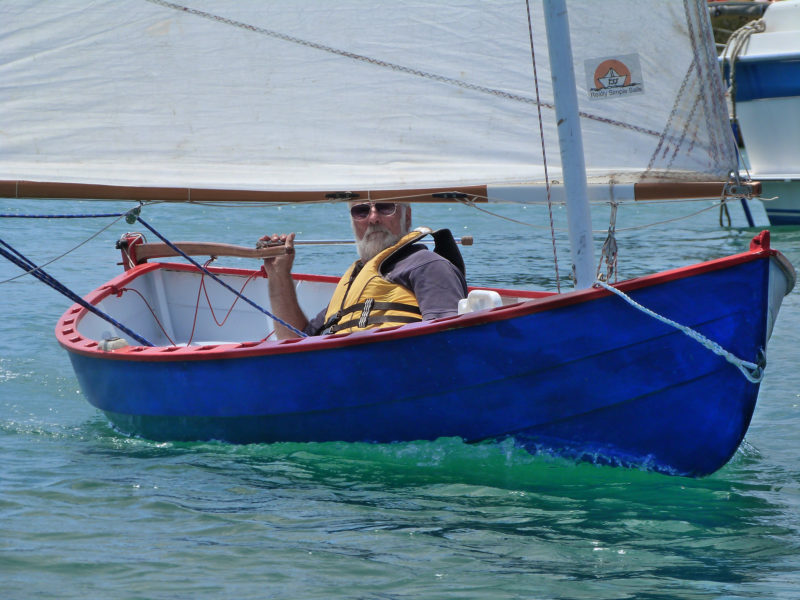 Sitting in the bottom of the boat is comfortable and provides a good view forward under the boom.

John went out first and sailed a few laps through the many boats moored nearby, jibing and tacking quickly in the narrow waterway. When it was my turn, I shoved off into knee-deep water, hopped aboard, and settled in with the sheet in one hand, tiller in the other. The boat was moving almost before I sheeted in. In just a few seconds the water was deep enough to lower the daggerboard and drop the rudder completely.

The mooring field was tight, and my attempt to avoid it by edging along the river’s edge ended abruptly when the daggerboard struck the sandy bottom and brought the boat to a grinding halt. No problem—I simply pulled the board halfway up, let the boat slide free, and headed back toward deeper water. Negotiating the obstacle course of moored boats proved simple, too, despite fickle winds that brought sudden gusts from all directions. The Sei slalomed nimbly through the moorings, tacking and jibing reliably, and accelerating quickly. With just a hint of weather helm, a light touch on the tiller was enough to steer by, even in the gusts.

In such a small, light boat, the helmsman should sit on the bottom to keep weight low and centered. I found this perfectly comfortable, leaning back against the hull, and with the boom safely overhead, visibility was excellent. With no long centerboard trunk to get in the way, it was easy to switch sides at each tack. Though I normally prefer a pivoting board, the daggerboard, with its shorter trunk, is definitely the most workable option for the crew. 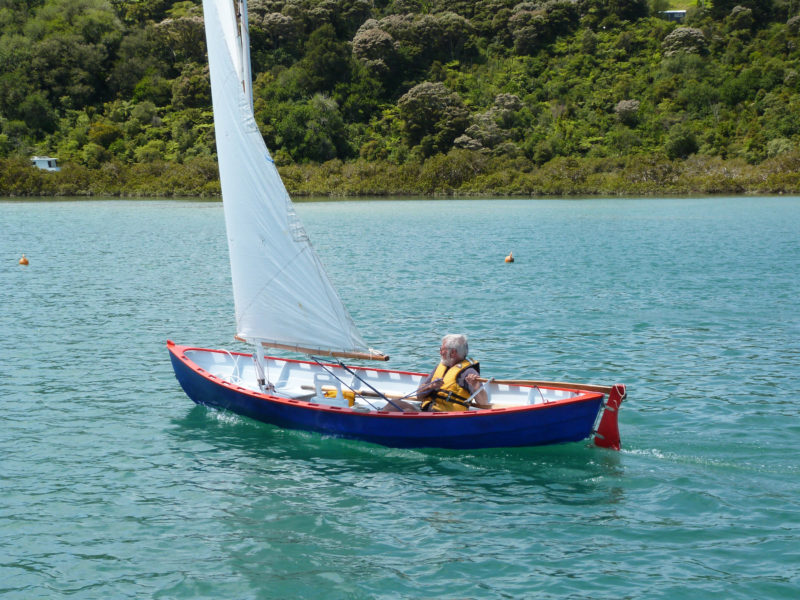 The Sei has a fine entry and its greatest beam is aft of center where it can better support the weight of the crew.

As with all of my favorite small boats, the Sei’s controls—halyard, downhaul, sheet, and tiller—are simple. The balance lug rig relies on a powerful downhaul to maintain luff tension, and as a result, the Sei’s 76-sq-ft lugsail is largely self-vanging. It’s safe and controlled when jibing, and easy to reef. For a small sail-and-oar boat, I wouldn’t want any other rig.

Like all double-enders, of course, the Sei is small for its length compared to a transom-sterned boat. While it’d be comfortable to take a passenger or two while rowing, and the hull could easily handle the weight, a Sei would quickly start to feel crowded under sail. While you might be able to fit someone else in now and then, I’d prefer a bigger boat if hauling passengers were a priority. It’s as a solo boat that the Sei really shines. You could easily haul enough gear for a week or two of solo camp cruising.

All too soon I had to head back to the ramp, but I’d seen enough to know that the Sei was a worthy addition to the John Welsford design catalog. Simple and lightweight, good-looking and well-proportioned, easy to launch and recover, quick to rig, a joy under oars, and a delight to sail, this is a boat that ticks all the right boxes. With a boat like the Sei, there’d be no excuse not to get out on the water, even if it’s only for an hour or two. If the 10 minutes required for rigging is too much, grab some oars and leave the rig behind. If you have more time, load the Sei up for a week on the water. Either way, you can’t go wrong.

Tom Pamperin is a freelance writer who lives in northwestern Wisconsin. He spends his summers cruising small boats throughout Wisconsin, the North Channel, and along the Texas coast. He is a frequent contributor to Small Boats Monthly and WoodenBoat. 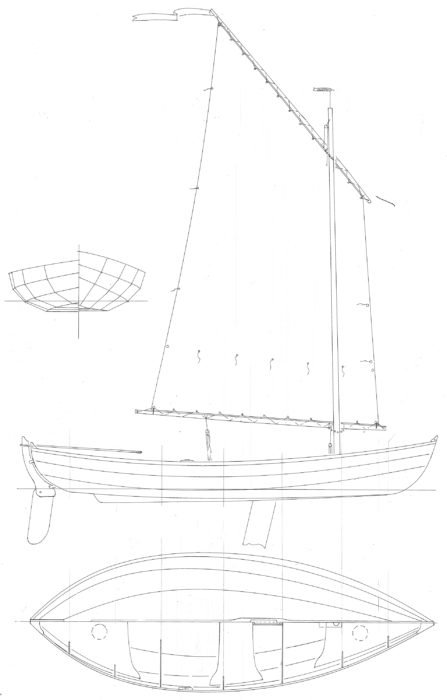