A power dory from Spira

by Al and June Dettenrieder

Lying in a hospital bed in 2014 after a short illness, I decided it was time to tackle one of my lifelong dreams, building my first-ever boat—from scratch. Since our boating consists of leisurely trips on lakes and rivers, I wanted plans for an open cockpit design with space for four deck chairs. After a lot of research, the Albion seemed to be the answer. Along with the plans I ordered, Spira included his 50-page Illustrated Guide to Building a Spira International Ply-On-Frame Boat. His website has an extensive collection of photos, blogs, and videos for ideas. One builder had even contributed a very helpful series of videos of his Albion build to the Spira website.

I started working on the boat in February 2015. To make sure the Albion would provide us with enough room, I drew a chalk outline of the boat on the garage floor. After I put four deck chairs on the area we’d have in the cockpit, I realized I needed an extra foot of deck space to be able to space the chairs comfortably. I contacted Jeff and he was completely amenable to this change—he notes that most of his designs can be stretched by 10 percent without having much effect on performance or cost—and worked out a new plan for the placement of the frames, adding a bit more than 1” to the span between each to add 1’ to the length.

The plans recommend using “standard dimensional lumber” for the frames, but I decided to use clear Douglas-fir from a specialty lumberyard in our town. I thought the straight, uniform grain would be easier to work and that the fir would be less prone to rot than some of the species sold as common lumber. The frames are 2x4s and the decking beams 1x4s.

I was able to find a 22′-long, knot-free 2×8 at the same lumberyard, perfect for the 20′-long piece needed for the keelson. This saved having to scarf two shorter pieces together. A Douglas-fir board this length was an amazing find for an East Coast lumberyard!

I used top-grade Douglas-fir plywood: 5/8″ for the bottom, 1/2″ for the sides, 5/8″ for the transom, and 1/2″ for the foredeck I added to the otherwise open cockpit. I built the strongback out of wood I had in my shop, and put wheels on it so that I could move it inside or out.

The boat can be built without lofting, so, using the measured drawings/offsets in the plans, I made full-sized templates on kraft paper for each of the 11 frames and the transom frame. The plans stress that the accuracy of each frame is the most crucial aspect of the build, and I wanted to be sure that I got it right, so I precisely lined up the frame pieces on the templates when drilling the holes for the bolts that hold the pieces together.

When building the transom frame, I missed the note on the plans that for a standard-shaft motor, the motor bracket frame member should be 5″ lower on the transom frame. Because of this error, I bought a long-shaft, 60-hp Mercury outboard, the smallest long-shaft motor Mercury makes. I originally wanted to buy a motor in the 30–35 hp range. 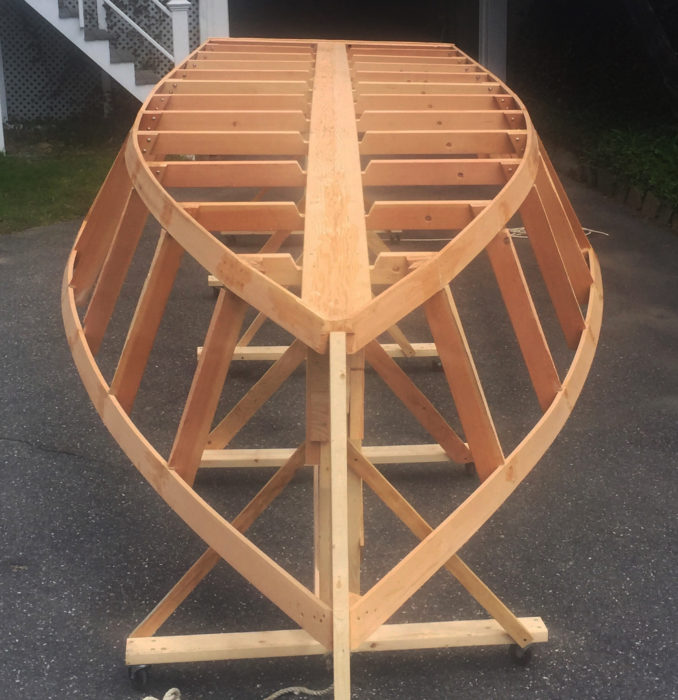 photographs by the authors

The framework is made up of common construction lumber: 2x4s for the frames, a 2×8 for the keelson, and 1x4s for the sheer clamps and chine logs.

Hull assembly begins when the frames and transom are placed in position on the strongback. The longitudinals—keelson, chine logs, and sheer clamps—make the structure rigid enough for the plywood to be bent over the frames.

The forward end of the keelson has to be bent to bring it to the attachment at the stem. I didn’t have a steambox, so I wrapped the keelson with towels and poured boiling water on the bundle several times, then slowly pulled the keelson down to meet the stem.

The plywood panels for the sides are bent around the framework first; the chines, sheer clamps, transom, and stem give them their shape. The bottom follows. The panels for the sides and bottom are butted together to achieve the full length and the seams are later reinforced with plywood backing plates, secured with screws and epoxy. After the plywood bottom and sides are screwed and epoxied to the frames, two layers of 6-oz fiberglass cloth, saturated with epoxy, cover the entire hull. The plans called for sanding the second layer of fiberglass cloth smooth, but I had a person from the local auto body shop apply an epoxy coating to the bottom. This made the bottom smooth without sanding, and I felt this would be a more durable finish. I then painted the bottom with two coats of George Kirby marine paint which includes UV inhibitors.

I added a 2×2 PVC keel, 16′ from the stern forward. The plans did not call for this, but I grew up rowing flat-bottomed boats and found that those with small keels seemed to track better.

At this point, the hull was ready to be turned over for placement on the trailer. My friends and neighbors helped, with excellent advice from a video on the Spira website, to gently roll the boat over with the aid of ropes and my tractor.

I followed the plans for forming the sides to the stem. Then I screwed on a stainless-steel bow plate that I had fabricated and polished. This was both for aesthetics and to add protection to the bow; I got the idea from the old inboard lake boats of the ’40s.

I was on my own for outfitting the interior. Jeff had learned that each builder inevitably has their own ideas for the interior, and so the handbook he provides with the plans simply states, “There are infinite possibilities, so have at it and enjoy,” and that is exactly what I did.

The drawings indicate optional caprails that cover the frame heads, sheerstrake edges, and outwales, but I extended those caps to 8” wide, allowing us to sit on them and swing our legs over the side to board and deboard the boat when it’s nosed up on the beach. As an added bonus, the side decks provide seating all along the sides of the boat. The canvas gunwale guard I installed along the sheer is easy on the legs when stepping over the side and protects other boats we may come alongside. 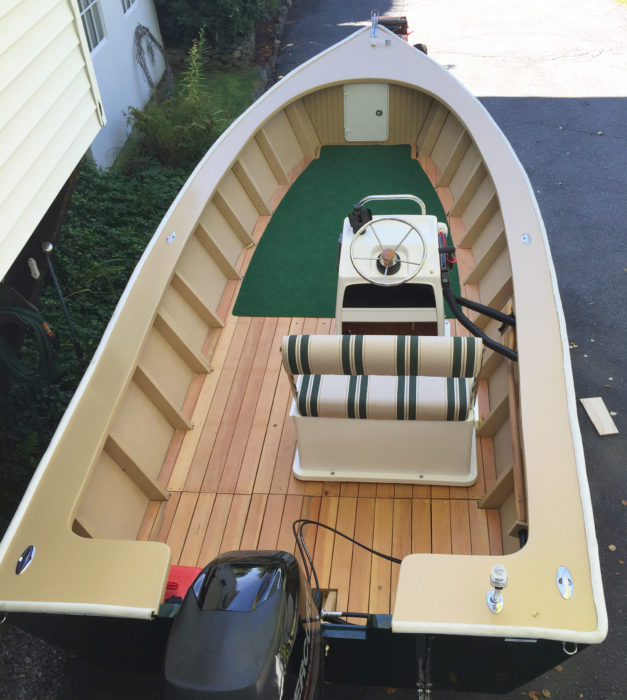 The plans leave designing the interior up to the builder. This off-center console offers easy passage from bow to stern; the carpeted area forward has enough room for four folding chairs.

The side decks curve into a 2′-long foredeck that creates space for locker in the bow section to store life jackets, cushions, and other gear. The compartment also includes an area for stowing the anchor rode, and I mounted a roller on the bow, allowing the anchor rode to go into a pipe and feed into the locker below. The foredeck also provides a safe platform while handling the anchor at the bow.

Jeff calculated the weight of the Albion hull to be 980 lbs; the decks, floorboards, and console I added brought my boat in at 1,420 lbs, and 1,680 with the motor installed. With the maximum displacement listed at 4,800 lbs, there was plenty of capacity left for crew and cargo.

I applied one coat of clear epoxy to the interior sides and two coats to the bilge area. I hired a professional painter to spray the interior sides with Raptor’s tan pickup-truck bed liner, which contains UV protection. This completely covered and sealed the wood, giving a nicely textured finish while concealing imperfections.

The plan suggested 1x2s for an optional cockpit sole; I chose to use 1×4 Douglas-fir to make six removable panels for bilge access. I coated those with Penofin Oil Finish, then assembled the panels and installed both those and some permanent floorboards. 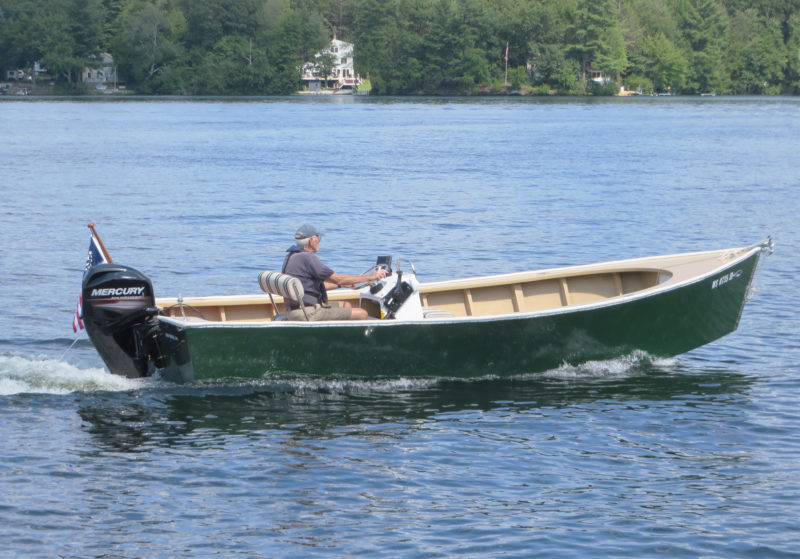 The broad buoyant stern can easily support the weight of a 50-hp outboard.

I purchased a prebuilt fiberglass center console into which I installed the steering controls, electric control panel, horn, and GPS. To make the wiring as invisible as possible, I ran all the wiring and motor controls under the side decks and into the console. Wires for the running lights run through a PVC pipe under the deck then up inside the console.

Finally, I hired someone to apply an epoxy coating to the hull and deck, then primed and painted them with the same marine paint as was used for the bottom. 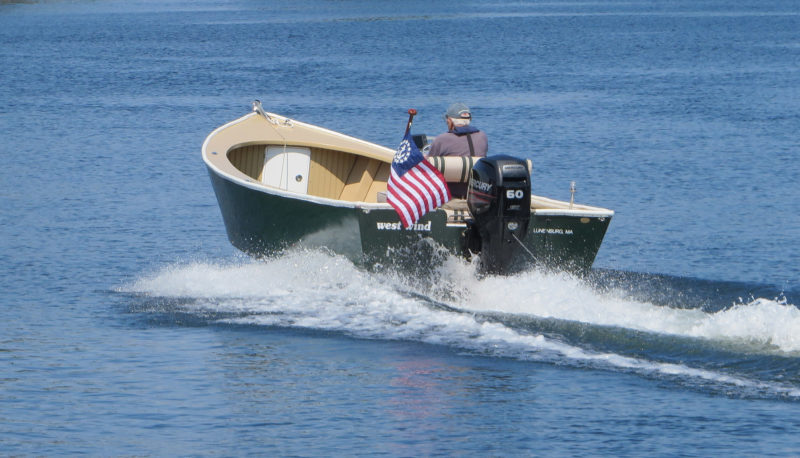 This 60-hp outboard can get the Albion moving at 29 mph.

My trials in a local lake proved that the boat trailered, launched, and performed remarkably well. The bottom is 5′ 9-1/8” at its widest point, and because of the narrow beam at the waterline, I feared the boat would be rocky, but was pleasantly surprised by its stability. Having the helm 13-1/2′ from the bow on a 20′ boat and off-center does not seem to hurt the performance or the balance. Even with the added foredeck and side decks, the cockpit is still quite open and we are able to move around freely with no obstacles or wires and cables to trip over (most important at our age!).

Forward of the helm, there is ample space for four people to sit comfortably in folding chairs, my main purpose for building this boat. 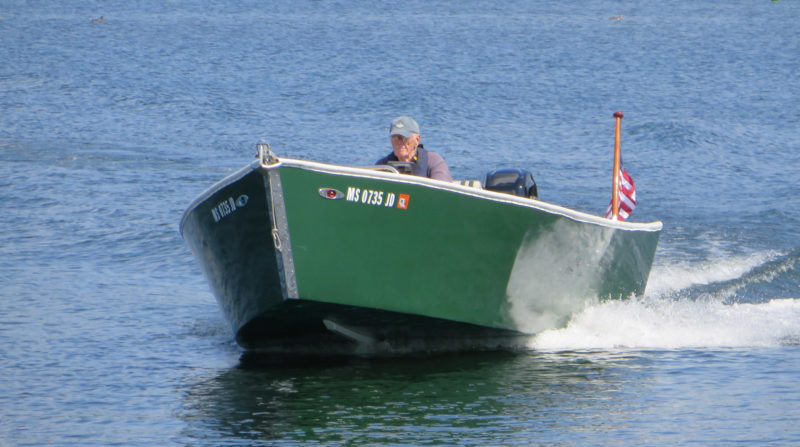 Coming up on plane, the bow stays low and doesn’t obscure the view forward.

Powered by the 60-hp motor, the Albion gets up on plane pretty quickly and does a GPS-measured 29 mph. It stays flat, even when climbing on plane, allowing me to have full visibility ahead. Sharp turns at full throttle, with weight in the back half of the hull, go very smoothly without any side skidding. 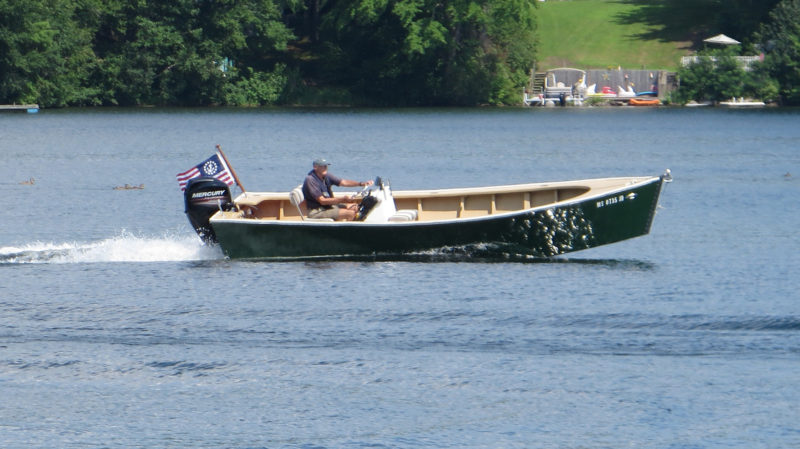 With the outboard at full throttle, the Albion carves turns without skidding.

We don’t encounter any rough water as all of our boating is done on small lakes and rivers, so we have no complaints about the flat bottom. One of the reasons I chose this design was because it would allow us to get up on the beach and disembark without the boat tipping.

Our aluminum trailer was designed to handle the Albion. We back the trailer into the water over the fenders and the boat floats off. When we reload, the boat floats on easily between the guide posts.

No matter where the boat is, on land or in the water, it draws a lot of attention. People are in awe and want to know what it is, where I got it, if I built it, where I got the plans, and how it handles. This build, transforming a pile of wood into a thing of beauty, has been the most satisfying project I have ever done.

June and Al Dettenrieder of Lunenburg, Massachusetts, have been messing around in boats all 58 years of their married life. They started with a rowboat with a lawnmower engine and a washing-machine transmission that Al rigged up. There were many boats after that, even a 38′ sailboat. Now they enjoy puttering and picnicking in local lakes and rivers in the outboard dory Al built at 79 years of age. His Albion dory won Best Power Boat in the “I Built It Myself” event at the 2018 WoodenBoat Show in Mystic, Connecticut. 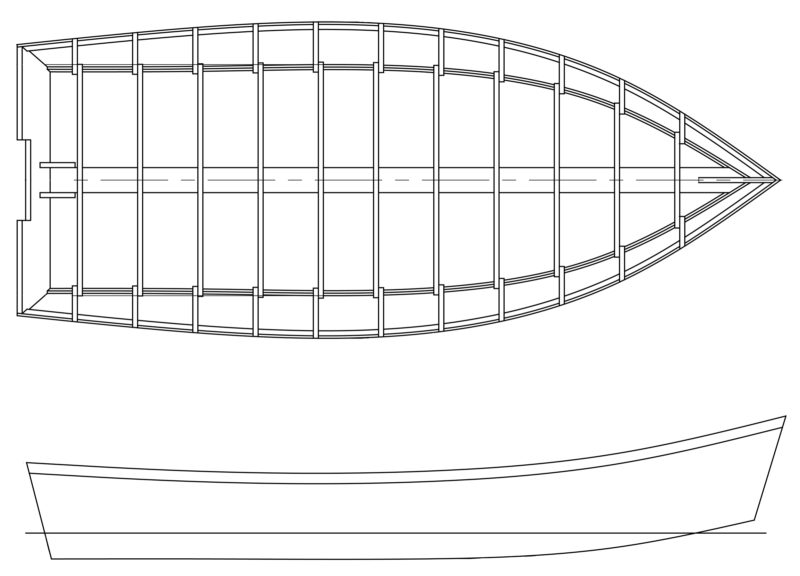 Plans for the Albion Pacific Power Dory are available from Spira International for $59.99 (digital download) or $69.99 (printed) plus shipping. Study plans and a photo essay in the boat’s construction are available for free.