There’s something nearly archetypal about the Long Point skiff. This 15-footer has high sides and a flat bottom, and is driven by a small four-stroke outboard motor. “It used to be that everyone had one of these things,” said the designer, Tom Hill, as we skipped across a modest chop on Penobscot Bay in mid-August. “They ranged from Maine to the Chesapeake, and were called clamming or crabbing skiffs.”

Hill conceived his own version of such a skiff for fishing the waters around Provincetown, Massachusetts. He’d made frequent outings in an earlier, lighter skiff of his design. One day he found himself towing a big fish alongside that boat. The big fish attracted a school of sharks. The small skiff’s topsides were only 4mm thick, and the sharks were bumping the hull. That set Tom Hill to thinking about bigger boats. “To make a long story short,” he said, “we decided we needed a larger boat with higher sides.” (Hill all but defined lightweight boatbuilding in the 1980s. The cover of his book, Ultralight Boatbuilding, pictures him holding aloft a double-paddle canoe on the tips of the fingers of his right hand.)

Here’s how Hill describes the Long Point’s design brief on his web site: “I wanted a flat bottom skiff that would draw a minimum amount of water to allow us to negotiate the Pamet Harbor at low tide and also be good for fishing the flats and marshes. She also needed to be deep and have a high bow for trips offshore, 15 miles from home.”

The designer-builder bought a used 15-hp Honda longshaft. “I couldn’t afford it, but Barbara [his partner] said she’d pay for the motor if I’d build a new boat. I knew I wanted a flat-bottomed boat because I wanted to go as fast as possible” with that minimal power, said Hill. Thus inspired, Hill made his first sketch of the boat in about 15 minutes. “Once I got the profile down, I wanted to keep the bottom as narrow as possible. And I wanted plenty of flare to keep it comfortable and dry. I then decided that I should change it—which is a mistake I often make.” He tweaked the lines and poked and prodded, but ultimately reverted back to the shape he’d developed in those first 15 minutes.

The skiff’s 11⁄2″ bottom is heavy and robust, and it feels like a sidewalk underfoot—especially in the choppy waters that are often the bane of flat-bottomed boats. The Long Point originally had a 3 ⁄ 4″ bottom. “I felt some oil-canning [deflection],” said Hill of his early trials in the boat. With that, he hauled the boat, removed the console, turned over the hull, and added another layer of 3⁄4″ plywood. He added a layer of 20-oz biaxial fiberglass cloth to this, making for a bullet—or beach—proof bottom.

“I wanted to be able to beach it,” said Hill. “We often beach for lunch. That’s another beauty of flat-bottomed boats: they beach bolt-upright.” The other beauties are speed and stability. The skiff’s ultra-heavy bottom acts as ballast. “You can step aboard standing on the rail,” said Hill.

Flat-bottomed boats are efficient, too. “I’m hard-pressed to use three gallons all day,” said Hill of a typical fishing expedition. He estimates that, with the throttle wide open, the 15-hp Honda on the Long Point skiff will burn one gallon per hour, with the boat (with just the driver) running at 20 knots. The highest speed Hill has recorded in the Long Point is 24.5 mph.

The simplicity, fuel economy, and “beachability” of flat-bottomed boats comes at a cost. There’s no way around it: Such a hull pounds in a chop. But one Long Point builder reports that there is a way to sidestep this pounding— literally: Stand to one side of the console, heeling the boat a bit while under way. This presents the “V” shape of the chine, rather than the pan-flat bottom, to the waves, smoothing the ride a bit. The prudent operator, however, will also slow down in a chop, improving the comfort of the crew.

The topsides are of glued lapstrake plywood. The garboards (lowest planks) are quite wide, suggesting that the hull would come together quickly. Construction is fairly conventional. It begins with a ladder-frame strongback that’s set right on the shop floor, and molds and profiles (describing the stem and stern) are erected on this. Ribbands are bent around the molds to describe the planks, and the planking stock is hung on the boat and scribed directly from the inside; there’s no laborious transferring of offsets involved in getting the plank shapes. When the boat is planked, the chines and garboards are beveled to accept the 1 1⁄ 2″ of bottom planking, and then the bottom is fiberglassed as described above.

Hill prefers to paint his boats while they’re still on their building jigs, and that’s what he does with the Long Point skiff. The boat is held rigid, for sanding, and it’s much easier to work on a bottom “downhanded,” rather than crawling underneath an upright boat and working overhead, like Michelangelo in the Sistine Chapel. Painting a hull while it’s still on the jig, however, will require considerable restraint of a first-time builder. There’s a near-universal urge for beginning builders to get their hulls off the molds and see them freestanding.

The completed, partially finished hull is then removed from the building jig and flipped over for framing and fitting out. The frames are installed only on the topsides, to add stiffness; the bottom is sufficiently robust to do without them. Hill used white pine for the frames of the boat we tested. The wood is lightweight and holds fastenings well. “Every ounce you can save is one less you have to drive through the water,” he said. Fitting out follows, and includes quarter knees, breasthooks, seats, console, controls, engine, tanks, etc. Building time can vary considerably, depending on the skill and pace of the builder, and level of finish.

In addition to his reputation for balancing canoes on his fingertips, Hill is known for exquisite detailing. The Long Point skiff that we trialed—the original boat, at age 11—is painted in marine enamel and looks like it just rolled out of the shop.

Hill is equally detailed in his cost estimating, and is quite confident in what one should budget for materials to build a Long Point skiff. This includes 3⁄ 4″ sapele plywood for the bottom, four sheets of similar 1⁄ 2″ material for the sides, trailer, engine, 12 coats of paint (and its associated sandpaper), controls, fuel tanks, masking tape, anchor, cushions, VHF radio, and compass. The figure is $13,000. Hill acknowledges that builders have reported substantially lower building costs, but he said that his calculation includes the finest materials and all bronze fittings and fastenings. And he questions whether those lower figures include things like masking tape and sandpaper—small items that can quietly add up.

As of the day we tested the boat, Hill had sold 123 sets of plans for the Long Point skiff. He’d sent them to all sorts of builders, but noted that the design was particularly popular with commercial fishermen, who use their skiffs as bait tenders and the like. One pair of New York City tugboat operators built one on the deck of a tug. Indeed, it’s a hardy-looking little hull, one right at home alongside its working forebears. “One of the great things,” said Hill of his experience with the design, “is the response you get from commercial boats.”

It’s been said that every boat is a compromise among speed, comfort, and efficiency. Tom Hill seems to have hit an ideal balancing point with the Long Point skiff. The boat fits her niche. “In my mind it’s perfect,” said Hill, “and I’ve had it for 11 years.”

Plans for the Long Point Skiff are available from Tom Hill Boat Designs for $75. 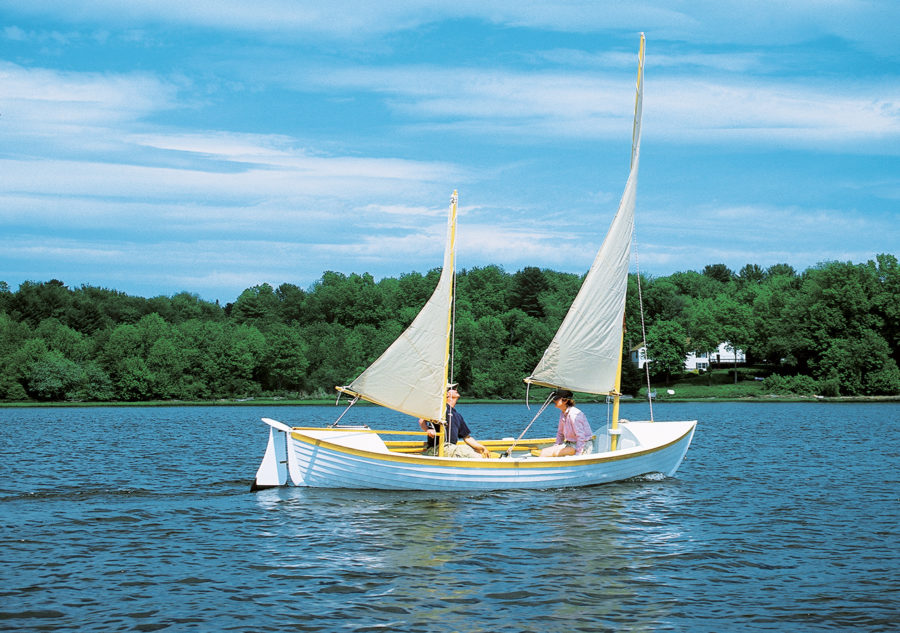 From the 2008 Small Boats Annual - Paul LaBrie is new to professional boatbuilding, but the design he chose for his first commercial project is one of the oldest in…