A boat for fine rowing and sailing

If you have seven days to race 90 nautical miles through the Canadian Gulf and San Juan Islands in a small craft powered solely by sail or oar power, this is the boat to enter. A Mower dory has been the top-finishing sailing craft in one such arduous race—called the Shipyard School Raid—each of the past two years.

Then again, if racing the clock doesn’t appeal, but you’re looking for a classy yet practical camp-cruiser for extended gunkholing—and perhaps an amateur boatbuilding challenge—this could very well be your boat.

The 18′ plank-on-frame Swampscott sailing dory is not only good-looking; it also sails fast and rows tolerably well. And nearly a century after its racing hull was conceived by noted yacht designer Charles D. Mower (pronounced with a long “o,” as in “lawnmower”), the Mower dory is still competitive.

“It was built to be a Raid winner,” said dory co-owner and Raid racer Quill Goldman. Raid organizer and yacht designer Tad Roberts concurs that “the Mower dory is a competitive Raid boat because it can be rowed very quickly when required and sails really well in both light and heavy wind—in fact, she sails better than most with an experienced crew.”

Inspired by a fellow racer’s Mower-designed 21′ X-dory, Goldman and his friend and business partner Richard Lyons picked the 18′ Mower dory out of the lineup of small boats John Gardner presents in his well-known book Building Classic Small Craft, Vol. 2 (International Marine, 1984). “I remember paging through the book and thinking, ‘That would be a great boat,’” Goldman said.

Then the two co-owners of Barefoot Wooden Boats— a boatbuilding, restoration, and charter company—set about making modifications to the Mower dory plans based on their requirements for long-distance racing. Goldman and Lyons swapped the leg-o’-mutton main for a sliding gunter rig, added a kick-up rudder blade extension and a second set of oarlocks, and called for sheathing the plywood bottom with Kevlar for superior abrasion resistance upon beaching.

The Silva Bay Shipyard School on Gabriola Island, British Columbia, which graduated both Goldman and Lyons in the early 2000s, is where the men turned to commission two Mower dories. Students at the school built one Mower dory, SWORDFISH, in 2005–06, and another, BARRACUDA, one year later. Further modifications to the second boat included lowering the profile of the center-board trunk so it was flush with the thwarts, enabling a second rowing thwart to be installed forward of the first.

When rowing long distances as a team, Goldman and Lyons find it most efficient to sweep only two oars with rowing stations staggered, switching sides when their arms tire. When under sail, the jibsheets are long enough for the helmsman to handle from the stern, so the dory can be singlehanded.

“It’s really versatile, the way it rows, the way it sails,” said Goldman. “It’s light enough that two people can drag it up the beach and push it back in the morning.”

“And the unstayed rig is so simple, one person can ship and unship the mast,” added Lyons.

For this review, we sailed and rowed SWORDFISH on Port Townsend Bay, the finish line for the 2007 Raid. Surprisingly, the Mower dory wasn’t as tender as it looked, as we found when switching places and tucking in a test reef. The helm was responsive in a light breeze, and the hull rode high and light. (With the centerboard up, the Mower dory draws only 4″ to 6″, depending on the load.) The wide laps made for a quiet ride. And the hull’s graceful curves drew admiring looks along the waterfront, as the sheerline of a Swampscott dory is bound to do.

Charles Mower was destined to become design editor of The Rudder magazine in the first decade of the 1900s, but he was only 23 in 1898 when he designed a 21′ racing dory for the Swampscott Club. What came to be known as the X-dory was highly competitive against the Alpha dories of Salem, Massachusetts, and the Beachcomber dories of neighboring Marblehead. Although it was Mower’s first commissioned design, it has stood the test of time.

This 18′ Mower dory is essentially a scaled-down X-dory, John Gardner concluded after the more than 40-year-old blueprints came into his hands in 1978. “In fact, it appears that Mower had one basic dory hull that he considered to be the ultimate Swampscott dory hull,” he wrote in Building Classic Small Craft. “In adapting it to a number of varying requirements he made some minor and superficial changes, but always without altering the fundamental characteristics of his original 1898 design for the Swampscott Club.

“The success of the X-dory was so outstanding that there was little incentive to attempt to improve upon it, and good reason not to risk spoiling it, even to a minor extent.”

In readying the plans for publication, Gardner notes that his principal departure from the original Mower blueprints was to suggest the addition of a rowing thwart “and the other minor changes that will make it possible to row this boat.” Gardner also recommends the addition of flotation if the vessel will see recreational use, especially by children. He is convinced the Mower dory’s beaminess (at 5′, it is 8″ to 10″ wider than the average rowing dory of the same length) makes it a stable sailing craft. And he points out that a number of sailing rigs may work equally well on the hull, as the dory’s extra beam and her side decks and coamings mean it can safely carry more sail than narrower dories of the same length that are entirely open.

There is one shortcoming: in his blueprints, Mower included but one sectional view of the dory and only a few basic dimensions. Gardner included some additional drawings of his own in his book, but a full set of plans does not exist. “Apparently he [Mower] expected that prospective builders would be familiar with standard dory construction,” Gardner noted.

This assumption gave Al Brunt pause. “I wasn’t that familiar with dory construction to begin with,” said Brunt, the head instructor at Silva Bay Shipyard School who oversaw construction of the two Mower dories. “I sort of had second thoughts when we were lining up to do the first Mower with the limited plans we had. [But Gardner’s book includes] a table of offsets, and that’s all you really need.”

Brunt said the dory was a good teaching boat, requiring a variety of techniques such as both sawn and steam-bent frames, and a plywood bottom combined with cedar-planked topsides. “Some pretty awkward angles” required full-sized mock-ups, including one detailing where the transom meets the bottom and garboard planks. Again and again, the instructors, students, and owners put their heads together to problem-solve design issues in true team fashion. In the end, Brunt said, “it was a wonderful, challenging project figuring everything out.”

Amateur builders considering the Mower dory are directed to Gardner’s The Dory Book (International Marine, 1978; Mystic Seaport Museum, 1987), which contains an extensive section called “How to Build a Dory,” including instruction on how to read a table of offsets.

The last word goes to builder Brunt, who is mightily impressed by the performance of the boat he’s twice taken from drawings to varnish. “It certainly scoots,” he said of the Mower dory. “It’s surprising how quick it is. It sails like a witch!” 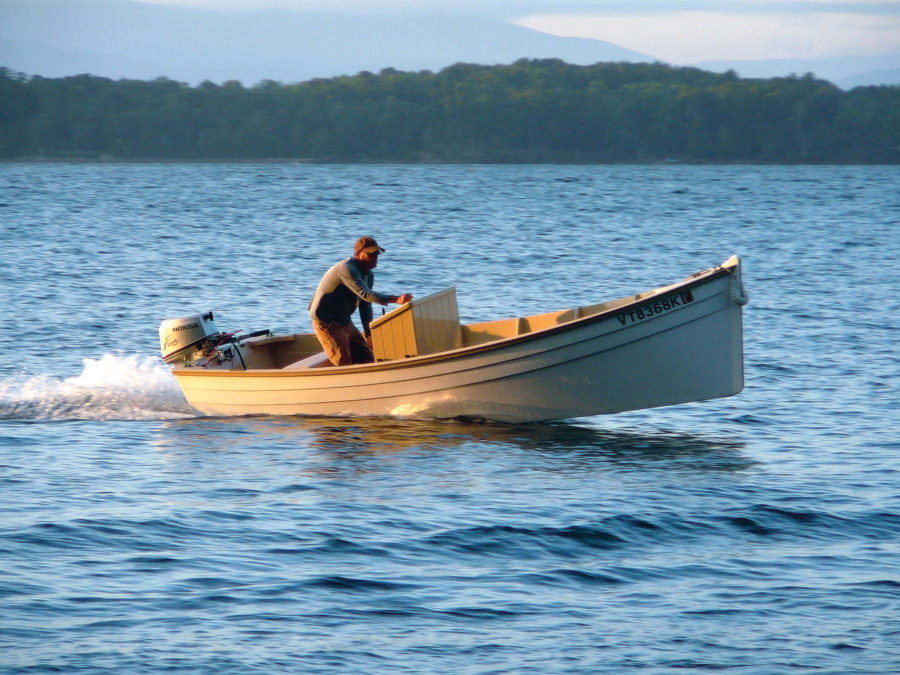 From the 2008 Small Boats Annual - There’s something nearly archetypal about the Long Point skiff. This 15-footer has high sides and a flat bottom, and is driven by a… 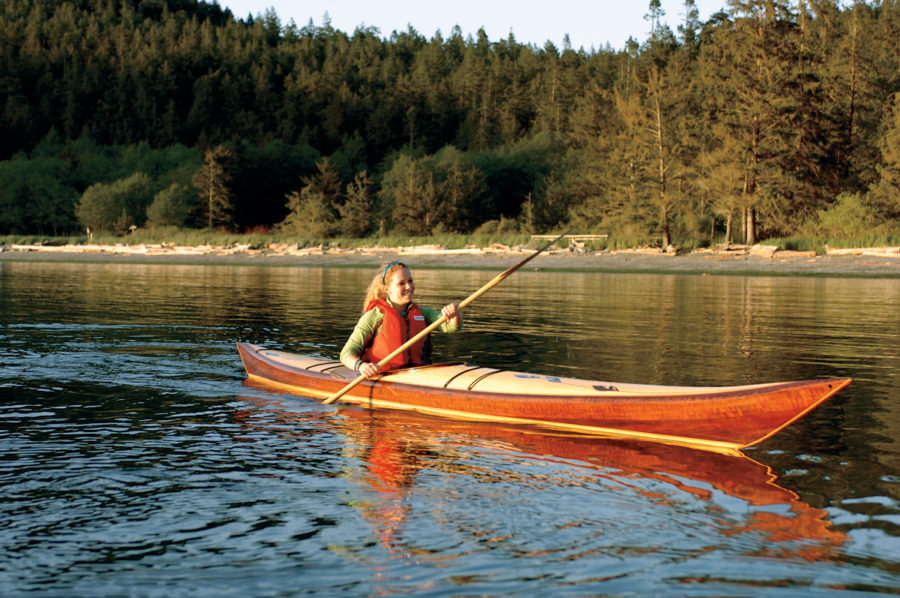 From the 2009 Small Boats Annual - Redfish Kayak specializes in kits and plans for a range of strip-planked paddle craft. The King has plenty of volume for gear stowage,…