“So, should we be expecting a prolonged period of rain?” asked a neighbor as I clamped the final plank onto the Welsford Penguin taking shape in my garage. The reference to Noah’s Ark had been made rather frequently as I carefully built my 21′ sloop, STELLA MARIS. The deluge was not imminent, as I took my time over 10 years to complete the boat. However, the comparison to the ark is not entirely misplaced.

John Welsford designed this trailer-yacht to be a roomy and comfortable cruiser with aesthetic appeal and excellent seakeeping ability. A curvaceous design, there’s hardly a straight line to be found from the rockered bottom to the striking sheer and the curved cabin roof. The gaff rig elicits images from a bygone era, but there is nothing old-fashioned about the Penguin. Plywood-on-frame construction with fiberglass sheathing results in an extremely strong yet relatively light structure. The interior layout is exceptional for a boat of this size, with a queen-sized berth in the forward compartment, ample storage, a head with privacy, a galley, comfortable seating in the main cabin that can sleep another two sailors, and even more storage space. So while it is not quite an Ark of Noah’s dimensions, it is pretty impressive for a 21-footer.

The hull is lapstrake with rounded sides and generous freeboard, culminating with a slightly raked transom. A substantial weighted centerboard and large rudder keep the vessel on track and, even with the gaff rig, allows for respectable windward performance. A lead shoe keeps her on her feet, and the designer indicates that the Penguin “will self-right from well past 90°.” A ground-tackle locker in the bow holds a good-sized anchor and all the rode you might require, while providing a handy and secure place to rest your feet if you want to sit forward while under sail. The deck and cabintop provide sufficient room for handling sails and rigging safely.

Penguin plans offer several sail configurations: gaff, Bermudan, and yawl. I built the gaff rig. The mast tabernacle and other fittings are extremely strong, with wire forestay and shrouds anchoring the rig to stout chainplates. Welsford’s drawings are precise and well detailed, and although a gaff rig can be somewhat complicated to get just right, his guidance is spot-on.

Twenty pages of highly detailed drawings, along with a materials list, several pages of instructions, building suggestions, and an index, should be sufficient guidance for any reasonably patient and skillful builder to complete a Penguin. While I took 10 years to build mine, that’s no indication of how long it should take a motivated builder to get the boat to the water. I worked alone, mostly evenings and weekends, with frequent interruptions by family, work, and other events. And on top of that, building in Canada can be a challenge with our very long and cold winters, when an unheated garage just isn’t the place to be for about five months of the year. That being said, much of the building, especially the early stages, took place in my basement workshop: measuring and cutting out the bulkheads, centerboard case, and numerous other smaller parts. Measurements are in metric, which pose no problem to those who are accustomed to working in inches and feet when you have rulers and a tape measure with both metric and imperial readings.

Once the bulkheads are up, longitudinal strips that will define the shapes and positions of the planks go on. I used ash for the interior stringers, and found them to be sufficiently flexible to take the bends and twists. When thicker stringers were called for, as in the sheer clamp, I laminated them in place, in ash, in order to avoid breakage and steaming. Given the price of high-quality marine plywood, I used inexpensive doorskins as templates for the planks and many other curvy pieces. My wife didn’t like the wood paneling in our basement, so those sheets of old paneling were also put to good use in making patterns. As a result, I had very little waste of the good meranti plywood.

Once the boat was nearly complete, it had to be turned over to complete the bottom. I jacked up the construction platform, installed heavy-duty casters under it, and used 2x6s to build two octagonal forms around the boat. With the help of friends and neighbors, we pulled the platform out onto the driveway, and using a variety of winches and block-and-tackle, gently rolled the boat over on the octagonal forms. Then I moved the casters from the top of the construction assembly to the new bottom, and brought the platform back into the garage. This event proved to be quite a pleasant community gathering.

With STELLA MARIS upside down, I faired and sealed all of the exposed plank edges with epoxy, and fit the Douglas-fir keel and skeg. I covered the bottom first with a layer of Kevlar up to the waterline and over that with layer of fiberglass and epoxy.

Did I mention sanding? Or rather fairing and sanding, sanding and fairing? Actually, it wasn’t so bad, since with careful construction in the early phases and precise placement of the planks, the hull was quite fair to begin with. I built a dummy ballast from pine boards, and faired it to the exact shape that the lead would take, with a slot for the centerboard and holes for the keelbolts. I had acquired lead ingots and my plan was to melt them in our backyard, but my wife nixed that idea. I took my dummy keel to a lead-casting company that did a superb job of pouring the ballast. Even the bolt holes lined up perfectly once the boat was rolled over again. The lead shoe weighs close to 1,000 lbs and, needless to say, one becomes quite good at using a variety of jacks when working with something so heavy.

The final phase of construction involved the wiring of the navigation lights, interior lighting, and VHF radio. I called in my friend Daniel, a Navy veteran, to assist with rigging. His knowledge and assistance were invaluable as we laid out the spars, sails, blocks, and lines on the lawn and put it all together.

My rigging crew and I brought STELLA MARIS to the wide Ottawa River for her launch on June 24, 2015. After we raised her mast, bent on the mainsail, adjusted shrouds, and installed lazyjacks, we backed her into the water. She glided off her custom trailer easily, and sat at the dock looking quite pretty. Satisfied with our morning’s work and assured that the rigging worked as designed, we motored to my slip at the Nepean Sailing Club. We decided to take her for her inaugural sail once we were rested and the winds were favorable.

The next day we were out in 8 knots of wind, discovering that hauling up a gaff involves a substantial amount of line. Once the main was up and the jib was flying, STELLA MARIS kicked up her heels and she was off. The occasional gust did not perturb her at all, as she moved gently on all points of sail. It was a great success. A few days later, we took her out in stronger winds, gusting to 20 knots. With a single reef in the main, she performed splendidly, and was fast: We easily kept up with other boats, some quite a bit larger. She did not sail as close to the wind as marconi-rigged boats, but sailing just a few points off the wind she picked up speed and was a delight. She has a gentle motion when responding to changes wind speed, unlike the tiddliness of many other boats I’ve sailed. Her only shortcoming, in my estimation, is that she’s a bit rolly in a beam sea, but this is nullified when the sails steady her in a good breeze.

My youngest daughter became frightened of sailing at a very young age when we were surprised by a squall while sailing a dinghy. Now her fear has disappeared as STELLA MARIS solid and gentle motion reassures her. I look forward to building Welsford’s Pathfinder, but my wife won’t hear of it unless I find a new home for the Penguin. Is there prolonged rain in your forecast?

Having recently retired from a career in education, Jonas Abromaitis fills his days building things, the most enjoyable of which are boats. His challenge is finding the right balance between time spent in the workshop, and time spent on the water. He sails STELLA MARIS out of Nepean Sailing Club in Ottawa, Canada. 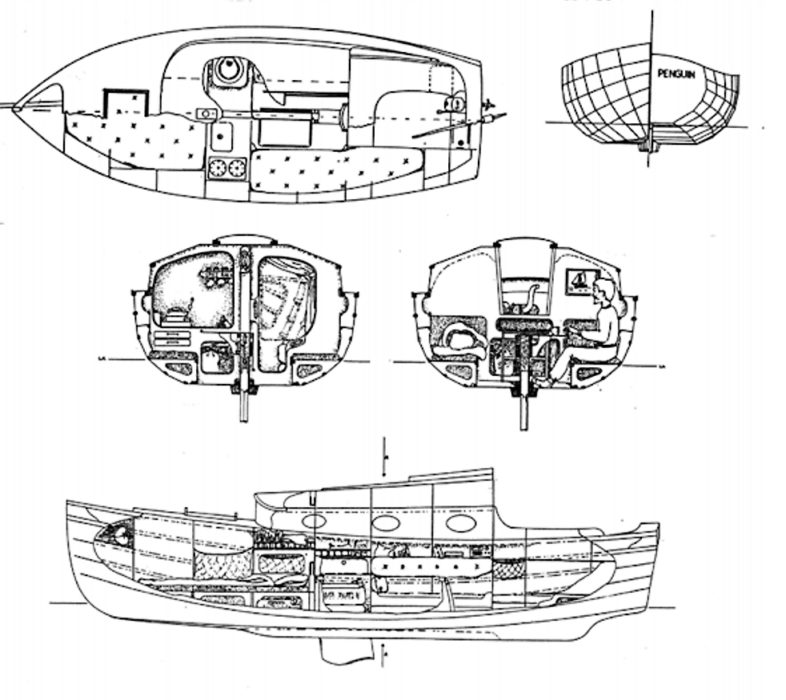 Plans for the Penguin are available from John Welsford Small Craft Design.

The Power Dory and the Pilot

Art Arpin was a Flying Tiger. He wasn’t one of the original group of American aviators—he joined just after the departure of their commander, Claire Lee Chennault, in 1942—but took…

It’s widely accepted that organic food is better for us and the environment, so it’s not a great leap to reason that organic paint would be just as good for…