PETITELISA is a synthesis of Gilles Montaubin’s long experience with sail-and-oar boats. Unlike many boats of this type, she is not reminiscent of any traditional working boat type. Instead, she incorporates some very contemporary features. Montaubin, for example, has intensively tested the use of water ballast on many boat designs, and its use on PETITELISA allows her displacement to be adapted to varying conditions: whether propulsion is by sail or oar, whether her crew is solo or accompanied, and whether the sea state is flat or rough. Adding water ballast while rowing in choppy seas increases inertia and makes boat handling easier. Yet this varying ballast is accomplished without changing her overall trailering weight: emptying the ballast tanks is a snap.

Since his childhood, Montaubin has had an acute point of view on the world of boating, a world from which he has always stood aloof. During the 1960s, his father, an orthopedic surgeon, was an enthusiastic racing sailor and boatbuilding fanatic. At that time, the La Rochelle area had few yachtsmen, so everybody exchanged a lot of technical information gathered from the various boatyards and naval architects working in the surrounding area. Gilles served his boatbuilding apprenticeship accompanying his father and decided, after receiving a doctorate of sociology in 1972, to establish himself as a boat designer and builder in the backcountry.

He already had in mind some strong building and design principles: one-off units, simple, cheap, and fast, designed to suit specific needs and developed following his personal experience and that of his customers. Since then, Gilles has never broken his own rules. After a personal experience designing and building a 30′ plywood cruising monohull, his professional career really began, and in 1977 he designed a 40′ cruising catamaran, with which he cruised around Spain and Portugal. Then he began to design boats based on the local types surrounding his location in the heart of le Marais Poitevin, a famous French swamp area of the Atlantic coast. These boats were flatiron skiffs, which here are called plate, which is French for “flat.” But instead of following the tradition of building this type of boat with heavy hardwoods, he switched to concepts he learned from multihull ultra-light composite technology. In 1986, he entered a design competition organized by the French magazine Le Chasse-Marée with his own reading of a traditional plate, built in foam sandwich and weighing only 150 lbs, ready to sail.

In 1992, he saw a nautical magazine that carried reproductions of postcards showing a misainier vendéen, a traditional cat-ketch lugger from the Vendée region. These images inspired him to create a modern interpretation of the type, which marked the beginning of a long line of cheap and fast sail-and-oar boats, all tested in various “Raids,” rowing and sailing races that have become popular throughout Europe, including Portugal, Scotland, Sweden, and Finland. In the 2006 Blekinge Archipelago Raid in Sweden (see WB No. 187), she placed first in her class. Such boats remain in accordance with Gilles’s way of life: discreet.

PETITELISA’s rig can be furled very quickly to adjust to the variable and ever-changing wind conditions of her coastal and inshore waters. Here, easy handling is the key for small-boat sailing security. She has also been designed to sail well to weather, for upwind efficiency is another important security feature on board sail-and-oar boats. At her owner’s request, PETITELISA has a centerboard, although Gilles usually favors the use of asymmetrical leeboards or a daggerboard angled in a trapezoidal well, a feature commonly found on racing dinghies.

The unstayed, carbon-fiber mast is built with two tube sections, the lower one 3 1⁄2″ in diameter and the upper one 2 1⁄2″. Some care is required to fit the mast in its step, because of its overall length of 26′ 3″. The two parts, however, can easily be taken apart for stowage in the cockpit while trailering. A screw in a notch interlocks the two sections of tubing for sail reduction, which is done by rotating the mast, just like a conventional roller-furling jib.

Weighing only about 26 lbs—including the sail—the rig is completed by a long boom. At first, Gilles designed a simple sprit, used only under full sail and stowed on deck if the sail is furled. Because he sails alone most of the time, the owner chose instead a curved laminated boom, with a gooseneck—which is a little bit awkward— fitted on deck behind the mast collar. Designed to reduce sail handling, the system works well but needs very long control lines and numerous cheek blocks.

The first time you climb aboard PETITELISA, you feel immediately secure because of her hull’s high initial stability. Based on a narrow sole with deep-V side panels, her double-chined plywood hull is much more sophisticated than it seems at first glance. The shape is a rather subtle and very efficient compromise, balancing low wetted surface, a long waterline length for rowing, and stability at first degrees of heel under sail. You can move around in the cockpit with the same kind of confidence you experience on board heavier and bigger boats.

Since the helmsman can reach all her lines, there is no need to walk on the foredeck, which is rather narrow due to the very fine entrance of her waterlines. This can lead to some difficulties for mooring or anchoring, although the samson post can be reached by leaning over the cuddy—and maybe a small hatch would improve the maneuver without adding too much weight.

The 17-gallon water ballast tank has been built into the bottom around the centerboard trunk. Its operation is more than simple: after launching PETITELISA, you open the small cockpit sole hatch close to the companionway, unscrew the drain plug, and wait for the tank to fill. A few minutes later, put the plug back in place and screw the deck plate back down. The plug can be removed again when hauling out to save some weight on the trailer. That’s all!

The small cuddy gives the crew a good chance to get out of the weather when necessary, but the designed cabin is too small to accommodate two usable bunks. It’s possible that moving the main bulkhead aft 4″ or so could improve things, but at the expense of cockpit space. Because the rowing thwarts are removable and the cockpit sole is perfectly flat, self-draining, and measuring about 8′ 6″ x 4′ 5″, two people could sleep there in good comfort under a boom tent. All cruising gear—and even a small galley—stows in the forward compartment. Because gear is not stored in compartments under the cockpit sole, the deck surface is kept perfectly watertight while sailing, but inspection ports allow some access to the flotation compartments.

Firm on her chine, PETITELISA is a delight to sail, even in light air. Her high-aspect-ratio sail plan and low wetted surface area have something to do with this pleasant behavior. Closehauled, she points rather high to the wind, but, as usual with a catboat rig, it’s better to keep her off a little bit. Downwind, she is very stable because of the forward position of the rig, which literally pulls the boat as if it were on rails—but mind that boom!

No sail-and-oars boat is perfectly balanced between both propulsion modes, but PETITELISA seems to have reached a high level of equilibrium between usually contradictory requirements. Not bad for such a simple girl.

Plans for the PETITELISA are available from Chantier Mer. 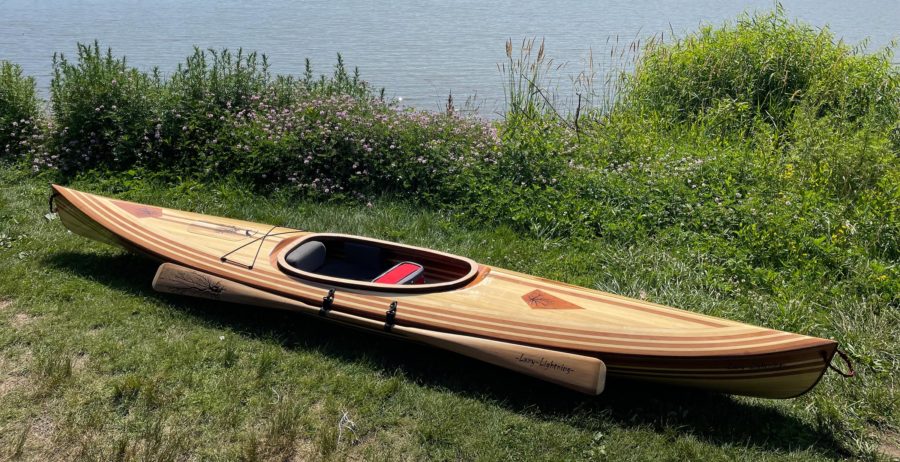 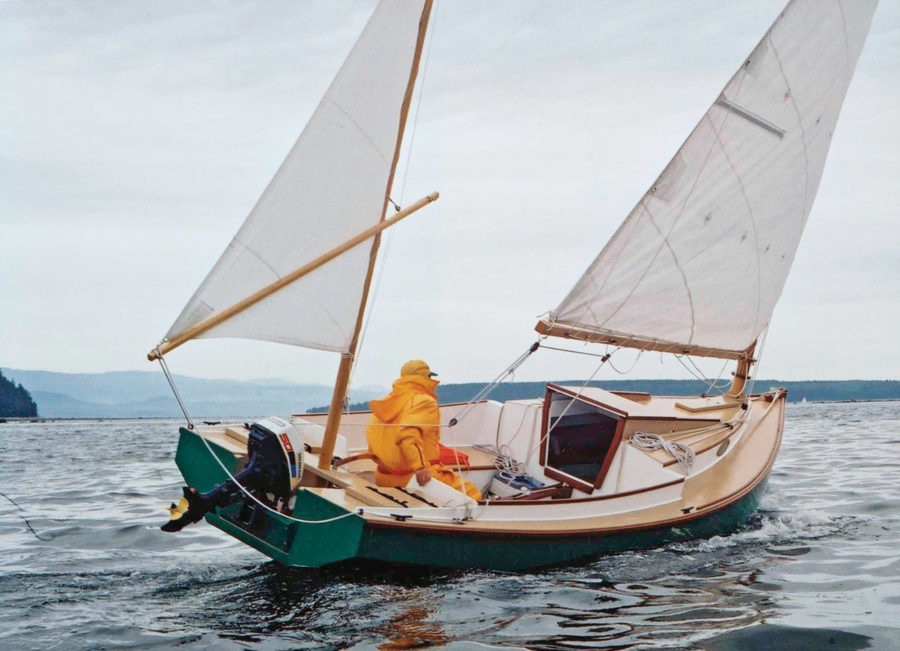 From the 2010 Small Boats Annual - There were three original Chebacco boats, all designed by Phil Bolger for Brad Story. Story was a friend of Bolger’s and a boatbuilder,…

I’d been thinking about building a sliding seat for my dory, so I clamped the Ducker slide into it for a test. I knew there would be clearance for the…