Few joys in life are simpler than a morning row. Oars over the shoulder, hollow footsteps along a wood-decked float, the boat quivering with the first step aboard, the sharp ring of the oarlocks as they slip into place, the soft purling of water against lapstrake planks as they leave the first wake of the day…all these seem to require stillness—all the better if it’s the perfect kind of stillness found on a lake just after dawn.

Time was, wooden pulling boats dedicated to such pleasures were common throughout the land. Lakeshore liveries—at least any with true boats in them—are largely and regrettably a thing of the past. One rare exception is The Center for Wooden Boats in Seattle, Washington, where a variety of boats can be used on Lake Union. Many of the boats in the CWB collections are of a type once common in liveries, and one in particular stands out as an exceptional lake boat. She is a light and lithe double-ender, a handsome 15-footer they call the Lake Oswego Boat.

Thought to be of Finnish descent, the original builder had the type as a stock offering in Portland, Oregon. His name is unknown, and so is the boat’s year of construction. Lines were taken in the early 1980s, and CWB students working under Eric Hvalsoe built a new one to the resulting plans. As the story goes, the builder produced the boat to a half model brought in by a customer, so its origins are obscure at best. The type became popular as a livery boat on Skunk Lake, which was later renamed Lake Oswego, a much more suitable name for what was destined to become a toney suburb of Portland.

Prevailing theory is that the first boat, built some 60 years ago, may have been loosely based on the Rangeley boats of Maine (see WB No. 39). But the differences—a flatter sheer, straighter stem and sternpost, and a much less pronounced turn of bilge—outweigh the similarities found in her dead-straight plank keel, use of an inner and outer stem assembly, and lightweight lapstrake planking fastened over closely spaced, light frames. To me, she looks like a cross between the Rangeleys and early double-paddle canoes.

She is a pleasure to row. She moves easily through the water and tracks well, and yet she’s easy to maneuver. Two can take to the oars, with room for a passenger or kibitzer aft. With my wife as passenger (and bailer; more about that in a minute), we explored some of the canals of Lake Union’s chic houseboat community, and once or twice I reverted to paddling. A canoe paddle would have served well in these tight quarters from the after thwart, which, together with her 4″ draft, bodes well for the boat’s ability to explore narrow channels at some remote lakehead. The original boat also shows a hole in the forward thwart for some sort of light sailing rig, but there is no sail plan. The CWB reconstruction is strictly for rowing, which makes sense to me for this type.

At the CWB, the boat is a true livery boat, and the center’s staff rotates boats in and out of service. She had been out of the water for some time before I asked to use her for a morning, and she hadn’t had enough time to take up well. A bilge pump was essential equipment.

With her long, lean shape and her easy entry and run, this would be a simple and pleasurable boat to plank. Either light copper rivets or clench nails would serve as fastenings for the plank laps and conceivably even for the plank-to-frame joints. It’s typical in a boat like this that the lapstrake seams don’t leak—water coming in is more than likely coming from the garboard seams and, especially, the hood ends. Extra care in fitting planks in those areas and carefully caulking the garboard seams should keep the water in its rightful place—out there in the lake with the rest of it.

For a builder who is contemplating a first foray into fully traditional construction, and with either some experience, a lot of confidence, or both, the Lake Oswego Boat would be an excellent choice. With no complicated hardware, no centerboard trunk, and scantlings that keep the materials cost on the low side, she’s all about the loveliness of planking, and she’d prepare such a builder very well for the next project up the scale of ambition.

This boat’s appearance rests squarely on its planking lines. Careful attention should be paid to how fair the plank edges are, how evenly the ends are spaced at the stem and sternpost, how neatly the gains are shaped so that they come together flush at the rabbet forward and aft, and how fair the curves appear when viewed in profile and from all quarters. The right calls on these details will have everything to do with making this boat look its absolute best.

The plans are in one sheet, and they leave considerable room for interpretation. The boat will have to be lofted, no doubt about it, but the offsets are taken to the inside of the planking, which should ease the job of making station molds. Many decisions, perhaps starting with whether to build right-side up or upside down, will be left to the builder. Common sense will prevail, and somewhere along the line the boat will become personal.

On Lake Union, near dawn is the right time for this boat, before the seaplanes and powerboats awaken and while Interstate 5, with a little imagination, still sounds like a distant waterfall. The lake is a great place, don’t get me wrong, and urban gunkholing is as interesting as any— but while I was rowing this boat I found my mind wandering back to lakes I hadn’t seen in a long, long time.

She’d travel easily, probably best with a small trailer, making her range pretty well infinite. Someplace farther out and higher up, I thought. Someplace of solitude, where the end of the lake has a trace of a stream begging to be explored a little farther and remembered fondly. Someplace so pretty that it can only be improved with a boat as handsome as this one, and—if you’re rowing properly—left astern without leaving behind so much as a sound. 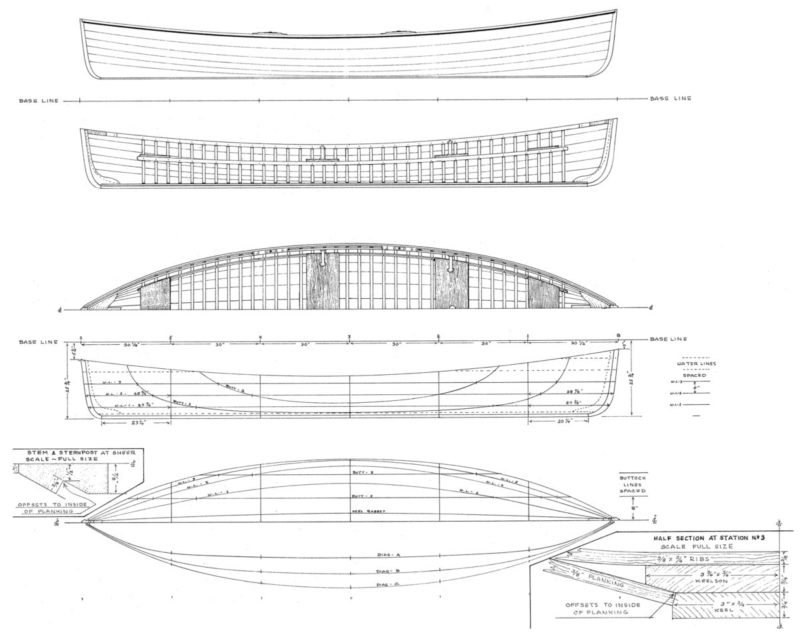 Plans for the Lake Oswego Boat are available from The Center for Wooden Boats.