When I retired, my wife and I decided to move from the middle of Wales to Modbury, a town in Devon, England, just 4 miles from the coast; the prospect of a move and more time on the water with my family encouraged me to look for a slightly roomier dayboat than my 14′ 6″ Oughtred-designed Whilly Boat. I spent many happy hours studying designs from France, America, Australia, and, of course, nearer home here in the U.K.

I became increasingly interested in the work of the British naval architect Andrew Wolstenholme. Two of his lapstrake plywood dinghies, the 11′ Coot and the 12′ Mallard, really caught my attention. Both were already very popular owing to their lovely lines and excellent performance under sail. I approached Andrew to persuade him to design a bigger dinghy for estuary use in Devon. The boat needed to be light enough for easy trailering but big enough to take care of itself on a mooring for the summer months. Andrew agreed and produced a set of plans for a new 15′ gunter-rigged dayboat, the Swallow.

The lines of the Swallow seemed to offer an ideal compromise of lightness, speed, and roominess. The plans are suitable for skilled amateurs, as there are no step-by-step instructions or patterns for planks. Lofting isn’t required—full-sized patterns for the molds and transom are provided with the plans—but the hull must be lined off and the plank shapes spiled. When I realized each sheer plank might have to be scarfed together from three pieces of plywood, I asked Andrew to reduce the overall length to allow for two 8′ lengths of ply, joined by 10-to-1 scarfs, to have sufficient length for the sheer planks. Andrew agreed, and the dinghy became 14′ 6″. The straight stem and slightly raked heart-shaped transom, coupled with epoxy-glued planking, give the Swallow a very traditional appearance.

Fairing the planking lines on a new design is quite time-consuming, and I spent many hours peering at a batten laid over the hull while I tried to visualize how the boat would look when turned the right way up. The plank widths were worked out for the stem, ‘midship mold, and transom. The marks for other molds were determined by laying a batten through the known points and then marking the remaining points where the batten intersected with the molds.

Throughout the planking process, the 13 molds kept the lightweight 6mm marine plywood fair. I sometimes used up to 30 plywood U-shaped, wedged clamps to hold each new plank in place until the epoxy hardened—they have the reach to get around the plank, cost next to nothing, and are lighter than metal clamps, whose weight could distort the planks. Each plank has a 20mm-wide beveled edge which provides ample gluing surface for the subsequent plank.

The Swallow has 10 strakes, making 20 planks to cut, trim, and bevel before fitting. The backbone is a substantial keelson in khaya laminated to a sapele keel. The 7/8” sapele transom is faceted rather than curved, so each plank end can lie on a flat beveled surface for a perfect fit. The gunwales and inwales are substantial, with three laminations of sapele sandwiching the sheer plank.

The interior layout is simple and comfortable, with the aft seat at the same height as the side benches, making it relatively easy to slide from one position to another inside the boat. The foredeck is above the bench level, but well below the sheer, and supported at its aft edge by a 12mm ply bulkhead. A large hatch on the bulkhead gives access to the watertight storage area under the deck. I stow the jib there, along with fenders and clothing. The rear compartment is accessed through two small hatches mounted on the bench and is used for stowing cordage, a chart, outboard motor parts, and safety equipment.

A pair of longitudinal buoyancy chambers span the bulkheads in the bow and stern and are fitted with removable hatches for ventilation and access. These chambers greatly increase the rigidity of the hull and comply with the EU Recreational Craft Directive regulations on safety. A pair of 7/8″ sapele knees at each bulkhead and at the center thwart secure the gunwales strongly to the hull. The centerboard case is topped by a 6″-wide 1/2″ plank, forming an additional perch in the middle of the boat. A 3’-deep swinging centerboard was fabricated from edge-glued sapele and carefully worked into an efficient foil from the plans. A 3” lead disc, epoxied in, provides some slight negative buoyancy. The nicely profiled kick-up rudder, offered in the plans as a full-sized pattern, is controlled by an uphaul and downhaul. The tiller projects from the rudderhead through an elliptical hole in the transom.

The boat carries a gunter rig, and the spars for the tall mainsail stow within the length of the boat. The mast is supported by two shrouds and a forestay. The plans call for a mast set in a tabernacle, but I opted for a strong bronze hinge. In raising the main, the yard is pulled tightly and parallel to the mast, in effect acting as a Bermudan rig. During windier conditions, the yard can be lowered about 18″ for attaching the main halyard with a quick-release pin to a second, higher slot on the yard when the sail is reefed.

Under sail, the Swallow is very responsive and light on the helm. The underwater profile of its hull not only gives a good turn of speed but the well-rounded shape, with a beam of 5′ 6″, is very stable when being boarded or sailed. There is room enough for up to four adults; with an agile crew of two aboard, the Swallow can be sailed very fast under full sail. On the Salcombe estuary in Devon, in a wind of Force 3 to 4, my wife Linda and I managed to keep completely dry despite the choppy conditions.

When sailing single-handed, the helmsman is provided with the main halyard and centerboard adjustment to the starboard of the centerboard trunk. A boom downhaul, with a 2-to-1 gun tackle to tighten the luff, leads to a cam cleat on the port side of the trunk. The Swallow sails wonderfully under main alone when going solo. I have experimented with leading the mainsheet to a block anchored on the centerboard trunk, but prefer handling the mainsheet as it comes from the boom end in the present arrangement. A kicking strap could be added to prevent the boom lifting, but I prefer less clutter. In recent years, I have fitted an auto ratchet block on the end of the boom to take the load in windy conditions. The mainsheet is led from the boom end around a block attached to a 2′ traveler on the transom.

The Swallow has a single rowing station at the center thwart and, with 9′ 6″ oars, rows with ease, but I stopped carrying oars some years ago and use an outboard for auxiliary power. I stow a Honda 2.3 outboard on the port side horizontally under the center thwart over a wooden block that protects the larch floor boards. To use the motor, a special two-piece plywood mounting fits over the transom, covering the hole for the tiller and protecting the mainsheet traveler. The outboard is then quickly clamped on the centerline and can be used in minutes. The motor powers the boat so easily that I rarely get to half-throttle.

Over the past 14 years, I have appreciated and enjoyed Andrew Wolstenholme’s timeless design for the Swallow—a traditional-looking dinghy which could happily sail in the lightest airs. I had originally wanted a dayboat that was roomy with easy lines and ideal for exploring the estuaries of South Devon, but I got that and so much more.

Nick Hanbury was a cartographic surveyor with Ordnance Survey, Great Britain’s mapping agency, and spent all his working life making maps. In 1992, he joined John Kerr at his boatyard in West Wales for a week and was introduced to concepts of lapstrake building. In 1997, Nick’s Whilly Boat won the Amateur Shipwright Award at the Wooden Boat Show at Greenwich. His Swallow, christened LUCY, went to the Boat Show at Beale Park in 2004 and won 3rd overall and special prize for Best Constructed Boat. He is grateful to Linda for her support during these projects. He’ll be happy to share more about his building and sailing experience through correspondence directed to nickhanbury62@gmail.com. 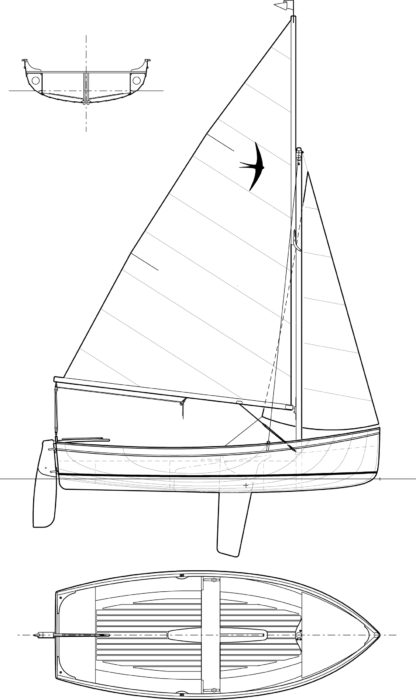 Plans for the Swallow are available from Wolstenholme Yacht Design for £125 ($162 USD) for e-mailed PDF files, and printed for an additional £20 ($26 USD) plus shipping.

The 4-mile row to the north end of Calvert Island brought me to Hakai Pass, its waters rising and falling with the ocean swell as gently as the chest of…

The pot is a 1-liter aluminum cylinder with nonstick coating and a base that connects it to the burner. It has a neoprene insulating sleeve to retain heat and a…

The Pooduck, at 12′10″, is 20″ longer than White’s Shellback, but they are otherwise quite similar and Dow’s book--with its step-by-step instructions for the glued plywood lapstrake construction, outfitting the…

Rowing the wherries is a sheer pleasure. The fine ends create very little drag. It is almost like rowing a competition skiff. I never felt like I was hitting the…