A proven performer for 61 years

by Kent and Audrey Lewis

The production of small boats was booming in the 1950s on both sides of the Atlantic, and really took off in the late ’50s with the introduction of fiberglass. Famed designers Uffa Fox and George O’Day teamed up in 1956 to create the O’Day Day Sailer. Fox is credited with introducing the technique of planing to dinghy racing and designed many significant classes of boats, including the International 14. The story goes that Fox wanted a pure racing dinghy but O’Day wanted the small cuddy added to increase appeal to the recreational market in the U.S., so Fox designed the planing hull and O’Day designed the cuddy. The resulting Day Sailer was a 16’9” centerboarder with a displacement of 575 lbs, which makes for a light load to tow behind the family car. The fractional sloop rig includes a generously sized spinnaker for exciting downwind sailing.

The first Day Sailer was sold in 1958 and immediately became popular in the recreational and racing markets. It was later designated as the Day Sailer I as four different models have since been built, with over 10,000 boats hitting the waterways. Day Sailer (DS) models I through III have been built by eight different manufacturers, with the current Day Sailer being a modified DS I with a few DS II attributes, such as the internal foam flotation and cuddy thwart. The original DS models I, II, and III were built from 1957 to 1990 by the O’Day Company in Fall River, Massachusetts. The DS I and modified versions of it were later built by Can-AM Sailcraft, Rebel, Spindrift, Precision, McLaughlin, Sunfish/Laser Inc. The current builder of the DS I+ is the Cape Cod Shipbuilding Company (CCSC) in Wareham, Massachusetts, holder of the exclusive license since 1994. The Day Sailer Class Association owns the molds that are currently used by CCSC. 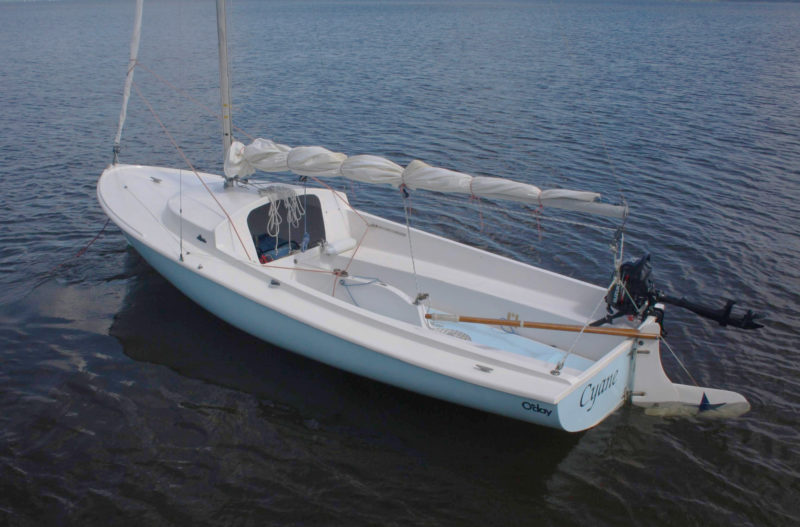 Photographs by the authors

The long side benches in the cockpit provide uncrowded seating for six. The sole is above the waterline and is self-bailing.

The early DS I can be identified by wooden thwarts, seats, and cockpit sole, a centerboard lever, open cuddy, and a transom deck. The DS II came out in 1971 with built-in foam flotation. The cuddy opening is smaller than the opening on the DS I because it also acts as a thwart, and a thinner transom allows mounting a small outboard motor without the need for a bracket. The Day Sailer I and II are considered class legal for one design racing, but the DS III is not considered race-legal due to higher freeboard on the transom, which was a departure from Fox’s hull design. O’Day built the III from 1985 to 1990, so to race in One Design regattas it is important to buy a DS I or DS II. The current Day Sailer in production is a modified version of the DS I with improved self-rescuing capabilities, two sealed air tanks, and a cuddy flotation tank with a smaller hatch.

The Day Sailer, no matter which model, is a very versatile boat, easy to rig, sail, transport, and store. With the mast down the boat and trailer take up just a few feet more than an average family car, so can be stored in most garages, though the mast may need to be stowed diagonally. At the ramp, the Day Sailer can be rigged in under 30 minutes: step the mast, add the boom, bend on the jib and main, clip the pop-up rudder onto the transom, and sort out the sheets.

Stepping the mast is the biggest challenge. The 23′4″-long racing mast is stepped through the top of the cabin onto the maststep fixed to the floor of the cuddy, and that can be tricky for one person. The mast does not weigh much, but it is helpful to have a helper at the foot of the mast to guide it into the cuddy opening. The good news with this arrangement is that once the mast is stepped, it is secure, and there’s no rush to attach the forestay. 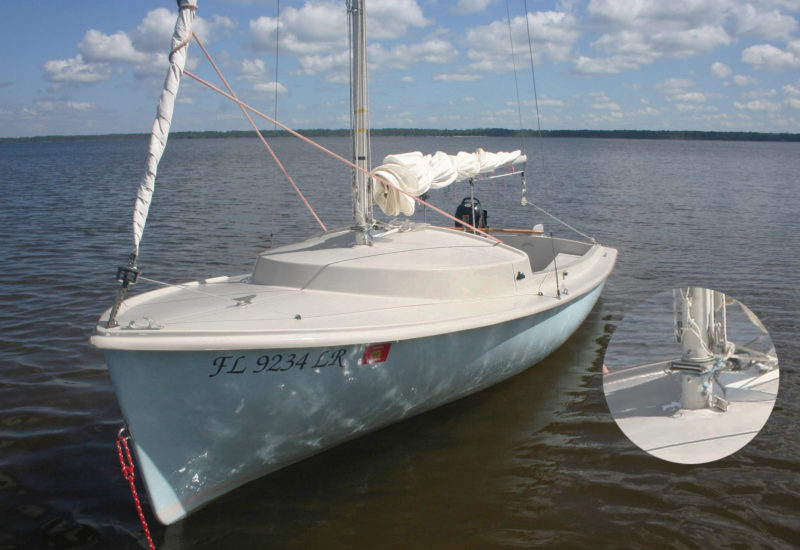 A mast hinge, a popular option, makes raising the mast much easier.

About 75 percent of the new boats are delivered with a hinged mast, eliminating the awkward gymnastics of stabbing the mast through the cuddy. Once the mast is raised and the forward hole on the hinge pinned, securing the forestay to the bow fitting takes the strain off the hinge. Side stays can then be tightened to take out the slack, but no more than hand tight. Stays that are too tight can damage the hull. Tighten the nuts on the turnbuckles and tape over any cotter pins.

There are different sheeting arrangements for the boom. Some boats have sheets attached in the middle of the boom; the sheet on a DS II starts from a traveler on the transom and ends forward on a swivel cam cleat mounted to the centerboard case. The DS II boom also has a spring in the gooseneck that allowed for roller furling— disconnect the sheet, pull the boom aft, and roll the sail onto the boom. A reefing claw has to be added to connect the sheet to the sail-wrapped boom, but this design is not optimum, nor is the wad of rolled-up sail by the boom’s gooseneck. A better arrangement is to add a conventional set of reefpoints to the mainsail. The boom also has a vang to improve sail control. 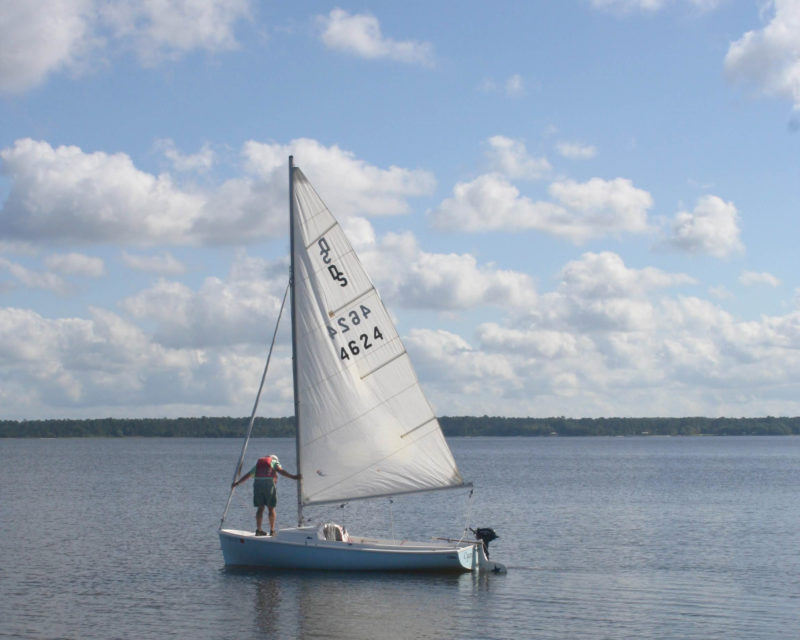 The 6′ 3″ beam gives the Day Sailer good stability, enough to keep the boat under someone standing on the foredeck.

The jib on the racing version of the DS is a standard affair, attached with hanks onto the forestay and raised with a halyard. Some skippers add a downhaul to lower the jib from the cockpit. Both the main and jib halyards are led aft on the top of the cuddy. The recreational version of the new DS I comes with a roller-furling jib, which we consider essential for sailing dinghies, especially if singlehanding. We have added a roller-furling jib to our DS II along with the mast hinge. We also added the hardware and rigging for a spinnaker, halyard, spinnaker pole, spinnaker pole control lines, sheet blocks, and jam cleats.

The Day Sailer is a treat to sail; it handles well, tacks with ease, and powers up quickly with its large sail area. The planing hull is responsive to the tiller, and the wide beam makes it stable. The boat will roll quickly but then sets on a tack, holding it with stable and positive helm control. The centerboard can be easily adjusted from amidships.

We sail a Drascombe Lugger and a Sunfish; the Lugger drives like the family sedan and the Sunfish like our Mustang. The Day Sailer handling is closer to that of the Sunfish—when the breeze picks up, the mainsheet needs to be held in the hand and someone should be ready on the jibsheets. The jibsheets run through the coaming on the DS I and through small cars on the DS II. For the highest performance, skippers have added tiller extensions and hiking straps. There is an outhaul on the battened main; racing versions have barber-haulers and travelers added. Pop the spinnaker, and it will scoot along quite nicely in a light breeze. 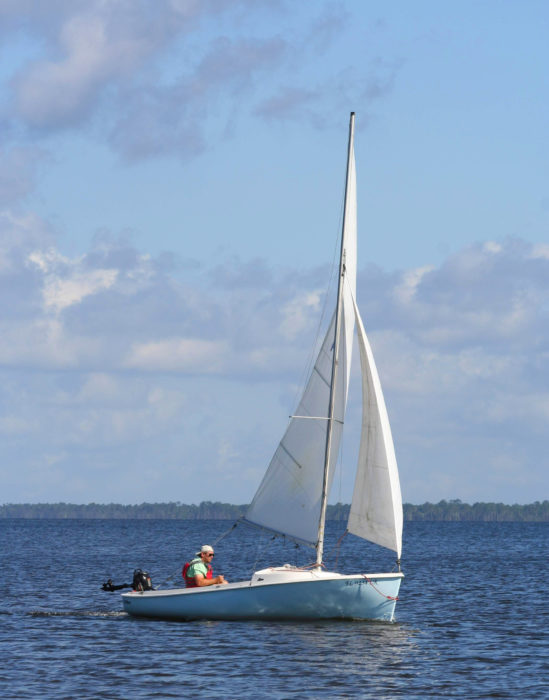 The Day Sailer’s 7′ 4″-long cockpit provides plenty of room for three adults, or two adults and two kids. With four adults it gets cozy; there is not much moving around, so whoever is sitting next to the tiller or foredeck needs to know what to do. It is easy to depower the main, reef it, or furl the jib as needed.

The cuddy is spacious for storing picnic or camping gear, and it affords a space equivalent to a two-person backpacker tent for sleeping aboard for overnight cruising. Adding a topping lift makes the boom nice ridgepole for a boom tent; there’s plenty of room to sleep in the uncluttered cockpit. The Day Sailer has completed many endurance cruising events, such as the Texas 200, Florida 120, and the Everglades Challenge.

A small kicker can be added for auxiliary power. We have used both an electric trolling motor and gas outboard, with best results coming from a 2-1/2-hp four-stroke that pushed push the boat to 6 knots at one-third throttle. The DS I will require a bracket to support and outboard; the DS II transom is thin and sturdy enough for a direct mount. If we’re not going far from home, we occasionally skip the outboard and carry a paddle; with her low coaming we have paddled her a bit, even backward over the transom. 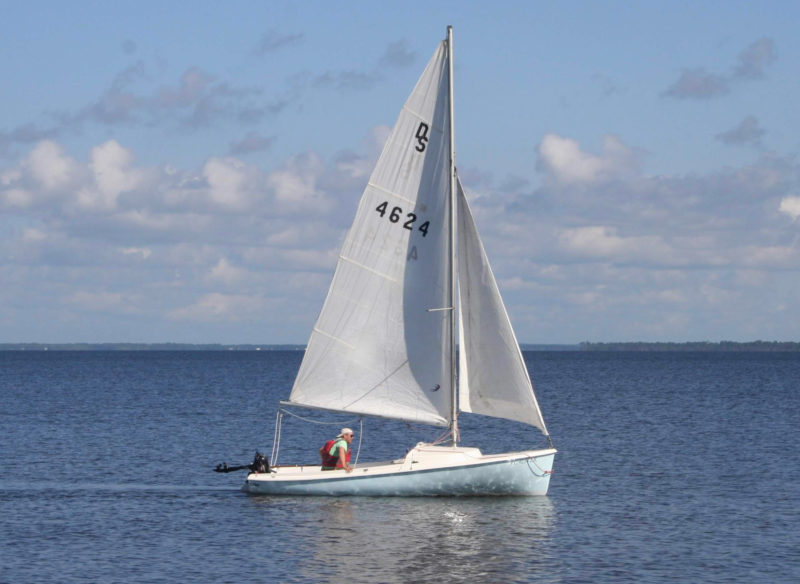 Day Sailers are easy to find and inexpensive, considering their capabilities. If you come across one, there are few important things to check. Make sure the centerboard moves in the trunk, see that the forestay tang and bow seam are not pulled up, inspect the cuddy deck for noticeable depression which would indicate failure of the maststep under the cuddy floor, and if it is a DS II look inside the flotation compartments. Rinse her off and get her ready to sail. There is a great Day Sailer Association with a web-based forum, and excellent parts availability.

We have had Day Sailers in our family since 1994. The first, named CYANE, handled the windy chop of Corpus Christi Bay with ease and the calmer waters of the St. Johns River at Jacksonville. We have had many fun adventures on our current DS II, also named CYANE. She has been launched for numerous day sails around Pensacola and Escambia Bay and has taken many family members for their first sail. She is most comfortable in a 10–12-knot breeze and wakes up for an exciting ride at 15. If you’re ever sailing in the Pensacola area, you’ll see her out on East Bay chasing dolphin.

Audrey and Kent Lewis enjoy time with CYANE, along with their small fleet of kayaks, canoe, sailboats, and lapstrake runabout. They blog about their adventures on smallboatrestoration.blogspot.com 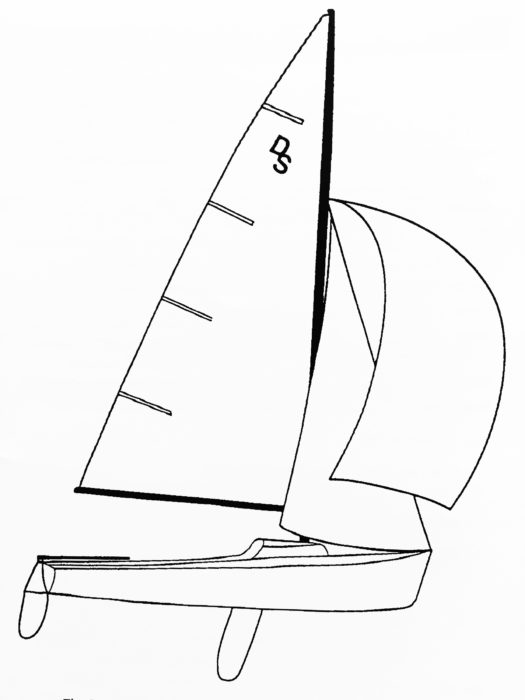