More Bang for the Buck

I had been hearing about New Zealand boat designer John Welford’s idea for the Saturday Night Special for a few years: a fast beach cruiser so simple to build that you could arrive a few days early for a multi-day small-boat cruise or raid with a few crucial pre-prepared components, build the boat, participate in the event, and go back home. It wasn’t entirely clear what you were supposed to do with the boat afterwards—you could disassemble it, sell it, scrap it, or donate it to the event hosts—but the notion of being able to sail your own boat in a far-flung event, eliminating the need to ship one there, was intriguing. Raid Finland? Sail Caledonia? Conquer the Everglades Challenge? I could imagine plenty of possibilities. 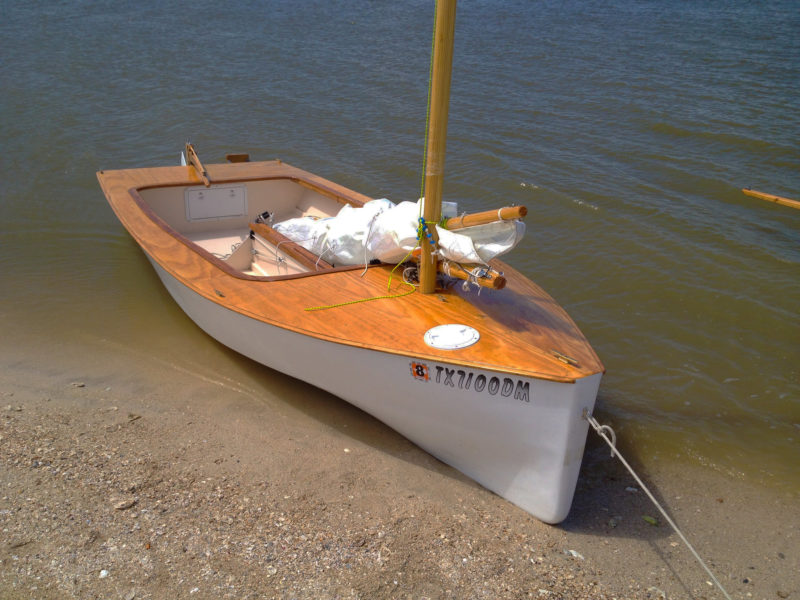 A centerboard complicates the building of the Saturday Night Special and takes up some space in the cockpit, but is essential for sailing shallow waters.

As it turns out, the idea of an inexpensive, easily built, fast cruising boat went through some changes between the initial concept and its final form, and what started out as an ultra-quick-build, one-race boat evolved into a more conventional build. Part of the Saturday Night Special’s evolution was a result of the shape needed to get the performance Welsford was looking for. The 14′ 8″ Saturday Night Special was designed specifically for the Texas 200, which typically involves downwind sailing in 20–25 knots, with exposure to big fetches and steep chop. To deal with those conditions, he drew a full bow with lots of flare to provide ample volume above the waterline, protecting the boat from burying the bow or broaching when overtaking waves while surfing. That shape proved difficult to achieve in the stitch-and-glue prototype. “The proof-of-concept boat that we built was a bit of a stinker to get the shape right without stringers,” Welsford reported. “There is a lot of shape in that chine panel forward.”

Although the hull was completed in three days, getting the bow right is probably beyond the skill set of less-experienced builders. So, although experienced builders could still choose to build a Saturday Night Special in stitch-and-glue, Welsford warns, “There is a degree of skill required to get it fair.” The plans now call for conventional plywood planking over bulkheads and stringers. 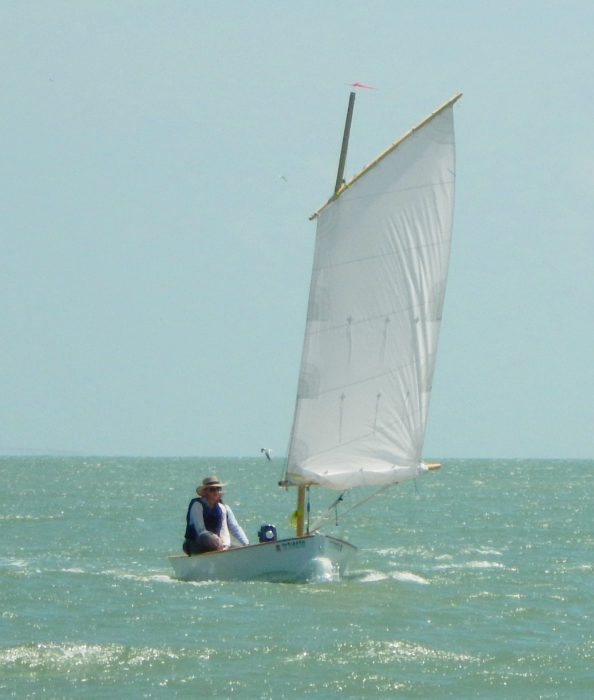 The bow is designed with downwind sailing in mind and has fullness to keep it from burying while surfing.

Like many of Welsford’s other designs, the Saturday Night Special is built upright on a narrow flat bottom panel; a simple building jig establishes its rocker. Three bulkheads and two permanent frames, along with the transom and stem, define the shape of the boat, and two full-length stringers on each side support the hull panels, greatly simplifying the construction process. The cockpit layout is as simple as could be, with no seats of any kind. “If you want to be comfortable in this boat,” Welsford writes, “go and buy a pool beanbag seat cushion and tie it in with a lanyard so it can’t blow away.”

At the request of Texas 200 founder Chuck Leinweber, Welsford modified the design to include a pivoting centerboard rather than the simpler daggerboard he had specified for the prototype. The change made good sense for a this event, since “deep water” on much of the Texas coast means getting wet up to your knees when you step overboard. The modification required changes to the structure to support the long centerboard case and slot, and another step away from the initial concept of an ultra-simple, ultra-fast build. Texas 200 organizers planned to create a rental fleet of Saturday Night Specials for visiting sailors to use, but it became clear that anticipated savings in labor and materials weren’t enough to warrant building the boats.

But although the Saturday Night Special didn’t become a build-a-boat-and-race-it design, the design still offers a lot of bang for the buck. “It’s still a very simple build,” Welsford says of the design’s final form. “No frills, no trim, simple unstayed rig, light weight.” It’s a somewhat Spartan aesthetic with no built-in thwarts, but it works well for its intended purpose: going fast downwind while still being able to handle windward work in heavy chop. Full-sized patterns for the transom, stem, and bulkheads are included in the plans, which speeds construction significantly. Welsford estimates a 50–60-hour build for “a tidy workboat finish.” One Saturday Night Special builder I talked to reported six months of “fairly diligent work” to complete his boat. 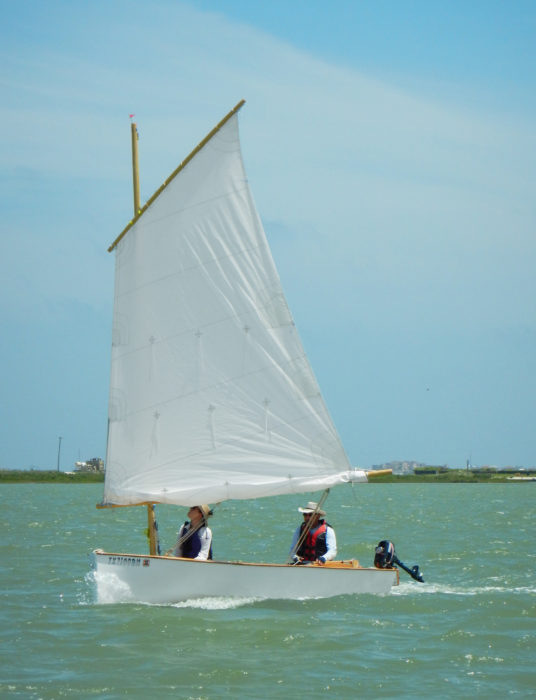 The transom is well suited to taking a small outboard for auxiliary power.

[DC]When I got word that several Saturday Night Specials would make their public debut in the 2016 Texas 200—a 6-day, 200-mile small-boat cruising event along the Texas coast—I was eager to see what the new design could do. The race began on June 13 and on day two, Saturday Night Special builder Bobby Chilek was sailing through the Land Cut, a narrow dredged channel that’s sheltered enough to offer flat water despite the typical 20–25-knot winds. He discovered that Welsford was right about the new design’s ability to plane freely in winds above 15 knots, even loaded with crew and gear. “I really didn’t expect the boat to plane in Texas 200 trim, what with two people, a bunch of gear, gallons of water and a full ice chest,” Chilek wrote later, “but plane she did. At times the front half of the boat must have been completely out of the water because as we were flying along, spray was shooting out both sides of the boat from about halfway back. I have to say that I have never gone this fast in a monohull sailboat in my life. We were having a blast.”

According to Welsford, a lightly loaded Saturday Night Special needs 12 knots of wind to start planing. Bobby Chilek reports that his boat will also plane under power with a 5-hp outboard at 10 knots. When I finally got a chance to go for a sail with Chilek, there wasn’t enough of a breeze to get his Saturday Night Special really moving, but it performed well anyway, tacking reliably and jibing predictably with just a touch of weather helm.

Although the boat appears simple, there are a couple of unusual construction details. The skeg does not run all the way to the transom; it’s cut short to keep lateral resistance closer to the center of the boat, which seems to help the Saturday Night Special turn quickly and tack nimbly. The unusual kick-up rudder is designed to function well even with the blade completely raised—the rudder cheeks extend down to the level of the skeg, and are equipped with horizontal end plates which not only provide effective steering in extremely shallow water, but also help reduce fore-and-aft pitching. 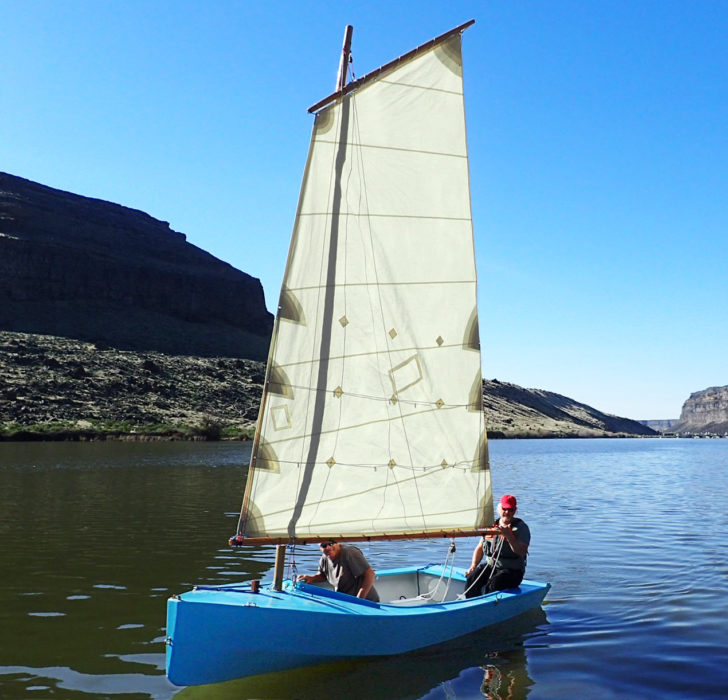 The 103 sq. ft. lug sail offers power in light wind and is easily reefed to keep from being overpowered when the breeze picks up.

The simple balance-lug rig provides advantages to both the cruiser (easily to reef, docile) and the daysailer (quick to set up and de-rig). The 103-sq-ft sail provides plenty of sail area for light wind and is easy to reef. Both builders I talked to recommended adding a boom vang to keep the boom from lifting and reducing the effective sail area while sailing off the wind.

The mast is designed to be built with bird’s-mouth staves, making it hollow and light. Although Welsford specifies using old-growth Douglas-fir for the staves, I saw two Saturday Night Special masts made of other woods, one of cedar and the other of pine. Both were far too bendy, even though each had a fiberglass sleeves added in an attempt to stiffen them; in 20+ knots of wind the bend was still extreme to my eye.

In small boats, comfort matters, especially during a long-distance event like the Texas 200. The Saturday Night Special’s cockpit is huge for a boat of its length, and the absence of seats and built-in furniture means lots of room for the crew. Although I chuckled when I first read Welsford’s comment about using beanbag cushions for seating, the idea made perfect sense to me once I was aboard. Lacking beanbags, though, the skipper still has several different seating options. On a broad reach or a run, they can sit comfortably either on the aft deck, or on the cockpit sole with their back against the rear bulkhead. For windward work, the side deck is probably the best choice. Hiking straps would be helpful for those who want to push the boat in higher winds. 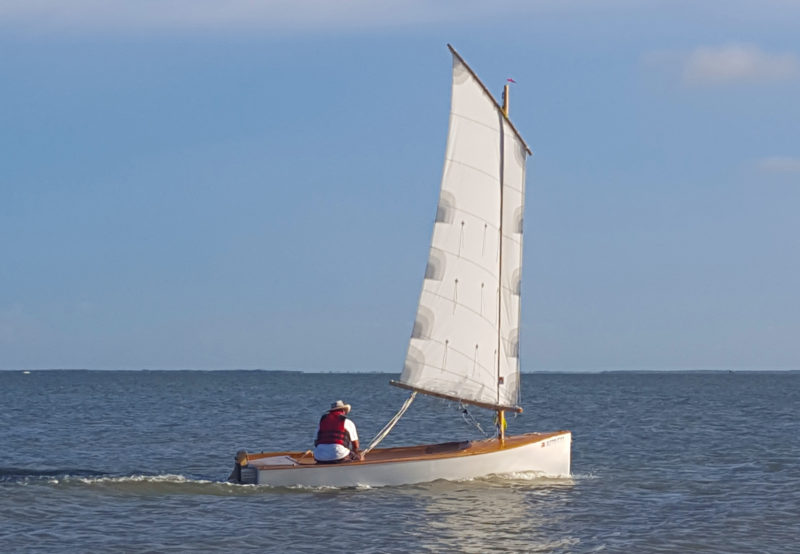 The Saturday Night Special was designed with racing in mind, but there is room for two to sleep aboard for cruising.

With two aboard, the crew is a little more constrained. The side deck makes a good seat (as does the aft deck on a run), but the long centerboard case divides the forward half of the cockpit, necessitating a step—an awkward one if you’re over 6’ tall, as I am—over it while ducking the boom at each tack. Chilek and his daughter Kristen, who crewed with him on the Texas 200, aren’t so tall and didn’t find it too much of a problem. After all, the Texas 200 is primarily a downwind event with little need for frequent tacking.

For cruising, there’s plenty of room to sleep two in the cockpit, with one on each side of the centerboard case; builder Phil McGowin chose to sling a hammock alongside the centerboard case instead of sleeping on the sole, and reported that it worked well. The uncluttered interior of the boat is fairly adaptable for sleeping arrangements, and the large sealed compartments under the decks fore and aft provide plenty of room for stowing gear. Beaching the boat and camping ashore is another option.

The Saturday Night Special strikes me as primarily a good “all-rounder,” equally suited for cruising or daysailing. Given its similarities to AWOL, an earlier cruiser/racer design from Welsford, that isn’t surprising. But considering the performance offered for the time invested, maybe the most interesting possibility for the Saturday Night Special would be as a one-design racer in a community more willing to invest in building a fleet than in buying one.

In the end, though, I couldn’t make up my mind about where this design best fits. That’s not necessarily a problem, of course— lots of good designs can serve several different purposes—but I decided to check with the designer himself to see what he intended. “Is the Saturday Night Special a cruiser?” I asked Welsford. “A racer? A daysailer?” His answer was an enthusiastic “Yes!”

Tom Pamperin is a frequent contributor to Small Boats Monthly and WoodenBoat. 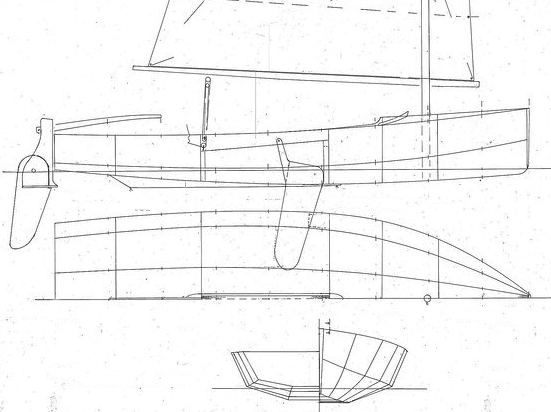 Plans for the Saturday Night Special are available from John Welsford Small Craft Design for $175 NZ and from Duckworks (digital) for $100.