A light dory for solo or tandem rowing

The Fairhaven Flyer is a sturdily constructed, easily rowed light dory. It is also simple to build since Sam Devlin, a master of stitch-and-glue boat design and building, refined the dory into a sleek, elegant shape created by three scarfed marine-plywood panels and a laminated plywood transom. If necessity is the mother of invention, then I am a bit involved in the birth of the 20′ 4″ Flyer.

I had built a 17′ 4″ Devlin-designed Oarling, equipped it with a sliding seat and outrigged oarlocks, and rowed it through the Canadian Gulf Islands 15 years ago. The following year, Sam and I discussed what design changes would be needed for a similar, but larger boat for me to row solo from Ketchikan, Alaska, to Bellingham, Washington. The boat would have to handle potentially large ocean swells, have reserve buoyancy that would lift the stern above breakers when driving through surf toward a beach landing, plus carry me and up to 700 lbs of food, clothing, and camping, cooking, and anchoring equipment. Simply stretching the Oarling would not produce the performance I needed.

Considerable tweaking created an effectively new design with increased displacement. I would have a narrow window—just six months while working a fulltime job—to build the new boat, amass provisions, dehydrate food, buy equipment, and get myself and the as-yet unnamed boat design to Ketchikan. When I let Sam know I had committed to doing the trip, he carved out time to create the new hull and sent a simple plan with offsets and stations to me shortly after I called. When I received it a week later, I called to thank him and during that conversation it occurred to us that the new design needed a name. I lived in a Bellingham neighborhood called Fairhaven and suggested “Fairhaven Flyer.”

In the decade that followed, Sam added details to the Flyer so that it could be rowed single or double, with either sliding-seat with outrigged oarlocks or with fixed thwarts and gunwale-mounted oarlocks. Light dories in general can feel quite tippy when not settled into the water with a load of cruising gear but the Fairhaven Flyer has high secondary stability, meaning it tips to a point and then stiffens up significantly and resists further rolling; anyone unfamiliar with this type of dory will soon get used to this characteristic. As the load in the dory increases, so does its stability, so it can be quite steady as an expedition boat even though it may be tippy when used for recreation and exercise.

When Walt and Susan Guterbock moved to Anacortes, a small city on the shores of Washington’s Puget Sound, five years ago, they enjoyed cruising the San Juan Islands that surround them and wondered what kind of boat would be best for two rowers and camping equipment. They joined the Old Anacortes Rowing Society (OARS), and immersed themselves in the culture of classic wooden gigs and wherries; Susan spent upwards of five hours rowing per week rowing the society’s three boats, and developed a stroke steady enough to allow her to row in the stroke seat and set the rowing pace for the crew. After Walt and Susan investigated several styles of pulling boats like Whitehalls and wherries for their personal use, they settled on the Fairhaven Flyer. They bought the plans and commissioned Andy Stewart of Emerald Marine to build the boat. Andy made a few minor modifications and additions to their new Flyer that are not in Devlin’s plans, but the Guterbocks’ boat, SCARLETT, is all Fairhaven Flyer.

Anyone with enough room, competent carpentry skills, and knowledge of fiberglass epoxy applications can build the Flyer. Depending on modifications and wood used, the boat will weigh between 120 and 200 lbs. I built my boat, BELLA, with okoume plywood, mahogany, and 12-oz. fiberglass cloth and tape. SCARLETT was built with Hydrotek plywood, sapele, and biaxial cloth.

Hull speed is a concern if you intend to use the Flyer for long rowing trips and need to make quick work of crossings and exposed passages. Prior to my departure for Ketchikan in 2004 I managed one sea trial with the empty Flyer. The fastest I could sustain with it was 4.7 mph. On my trip south from Ketchikan I encountered a lot of different sea states and rowing conditions, from extreme chop to very large ocean swell, flat reaches, 8-knot currents, debris, breakers, and upwellings. My average speed was 3.9 knots (4.5 mph) for the two-month trip. There were times when I was doing 7 knots with tide and wind, and times I crawled along barely above 2 knots.

All rowing craft have a their own measure of glide after each stroke, and you can judge the effectiveness of your boat length-to-glide ratio by the distance between oar “puddles.” The Flyer, outfitted with a sliding seat, outrigged oarlocks, 9.5′ oars, and carrying 500 lbs, had a consistent 25′ between strokes at 22 strokes per minute and a speed of 3.5 knots. That long glide allowed me to row at a low stroke rate, kept my heart rate low, and conserved energy for long hauls. SCARLETT, with fixed rowing stations and shorter oars than I use also has an exceptionally long glide; even when Walt and Susan stop rowing, the hull will carry them twice its length before noticeably slowing.

The flat bottom of the Flyer makes it easy to beach the boat. It takes to the bottom sitting upright and doesn’t roll to one side or the other like a wherry, peapod, or Whitehall. During stops ashore while cruising, I can comfortably stretch out in the cockpit to snooze or eat with an oar braced above me as a ridgepole and a tarp draped over for sun protection. Even for afternoon outings this solid footing ashore a great benefit—wineglasses don’t fall over.

In a following sea, when large steep swells came up astern, I treasured the tendency of the Flyer’s bow to slide forward and lead the stern as we raced down into the trough. A boat with a keel and a more pronounced forefoot, like a wherry, would likely catch the water and veer, and would have a greater tendency to broach. It is the dory’s ability to slide, rather than capsize on the face of  a breaking wave, that Chay Blyth and John Ridgway owed their lives to when they rowed across the Atlantic in an open 20′ dory in 1966. It is also the attribute that made me suspect that my Fairhaven Flyer was smarter than me.

The Fairhaven Flyer can be light enough to cartop but it is a rather long boat and does not lend itself to easy transport on a roof rack. A boat trailer is a preferable way to move it.

If, like Walt and Susan, you can keep it in a marina slip during the summer months, spontaneous picnic rows require little more than packing the sandwiches and thermos, grabbing your rowing kit, getting down to the boat, and rowing away. But if you are drawn to more ambitious outings, as I am, you can head out to the San Juan or Gulf Islands for the week, or row double from Sausalito to Angel Island, or venture from Quoddy Head Light to Grand Manan Island. The Fairhaven Flyer will get you safely and quickly there, happy to take as much gear, food, clothing, and whatever else you might think you need.

Dale McKinnon began rowing in 2002 at the age of 57, and in 2004 rowed solo from Ketchikan, Alaska, to her home town, Bellingham, Washington. In 2005 she rowed from Ketchikan to Juneau. Her previous articles for Small Boats Monthly include rowing the Columbia River and the Columbia River estuary, how to row rough water, and reviews of NewGrips and CrewStop rowing gloves, Exped sleeping pads, and the Devlin Duckling 17. 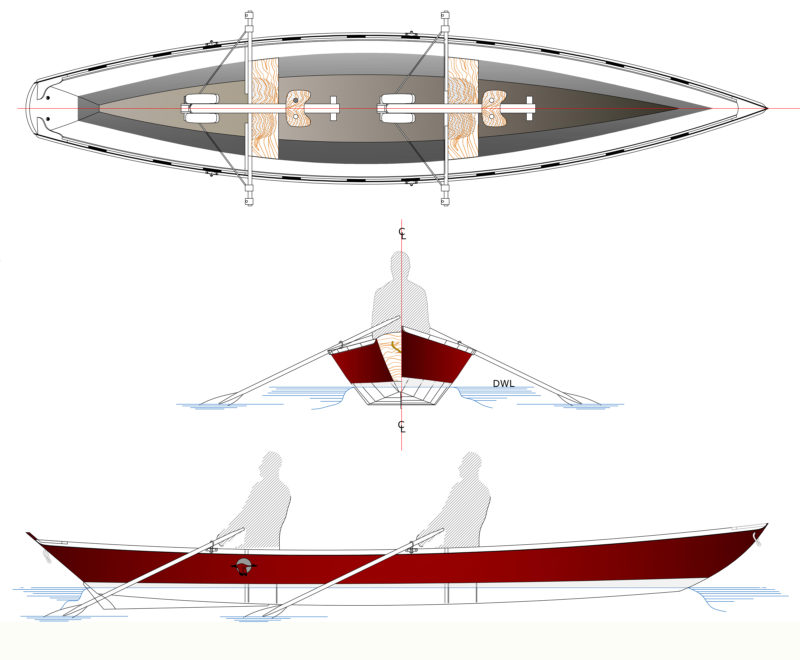 Plans for the Fairhaven Flyer are available from Devlin Designing Boat Builders in print ($85) or digital ($55) format.

One thought on “Fairhaven Flyer”