An able dinghy by Joel White

The Pooduck Skiff had long been a bucket-list item for me. Almost 20 years ago I bought and read Eric Dow’s book, How to Build the Shellback Dinghy, and every so often I’d take it off the shelf and reread it, rekindling the longing to build a boat and learn how to sail. It wasn’t until recently, as an empty-nester, that I finally had the time, means, and space to build a boat. I bought the plans for the Pooduck Skiff, designed by naval architect Joel White for sailing, rowing, and, sculling.

The Pooduck, at 12′10″, is 20″ longer than White’s Shellback, but they are otherwise quite similar and Dow’s book—with its step-by-step instructions for the glued plywood lapstrake construction, outfitting the interior, and building the sailing rig—can be used as a guide for Pooduck as well. I entered the project with moderate woodworking skills acquired from years of home-ownership and taking woodshop classes, so I appreciated the book’s tips on what tool is best for what job, and on building useful jigs. As an example, I don’t know how I would have transferred the angle and curve of the hull to the edge of the seats, without the using the jig presented in the book. I also had some help from my friend Steve, who had some boatbuilding experience. Still, we both learned a lot with this project. I approached the build as several smaller projects ranging from tool sharpening to knot tying, and got a lot of help along the way from instructional videos on YouTube. 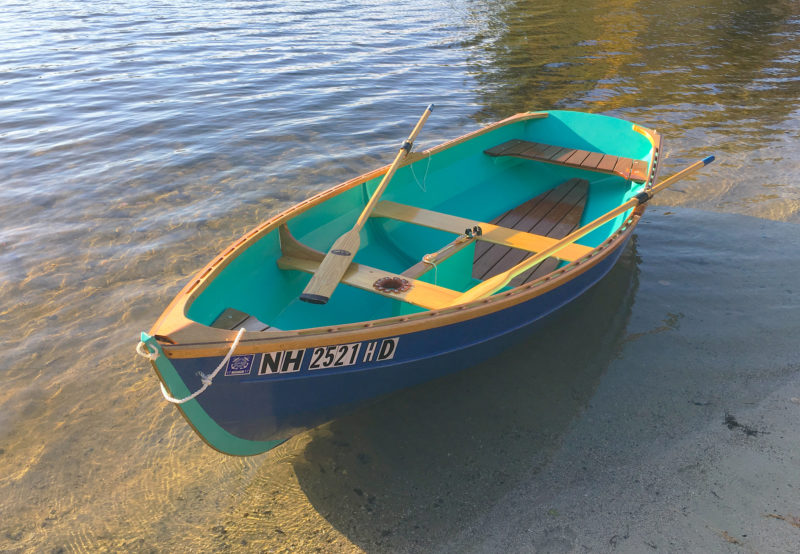 While this skiff has only a single rowing station, the plans call for a second station at the thwart that serves as the mast partner.

I have a fairly well-equipped woodshop, and while my power tools were invaluable and did some jobs faster and more precisely, not all tasks lent themselves to using a bulky tool with an electric motor. The Pooduck project deepened my experience with hand planes, and I made certain they were sharp. A bullnose rabbet plane is especially handy for working in tight spaces and for shaping plank bevels and gains.and

The plans I purchased from The WoodenBoat Store are straightforward and contain every bit of information you need to build a Pooduck, though novice builders will benefit from Dow’s book as an supplement. The six pages of plans include full-sized patterns of the molds, stem, transom, breasthook, knees, and the boat’s single frame. Patterns for the planks are not full size, but described by a measured drawing. When plotting out the coordinates of the planks on the 3/8″ plywood, double-check your measurements. The plans note: “it is advisable to get out the planks a little oversize (1/4″ to 1/2″ in width), then determine the final shape on the jig.” 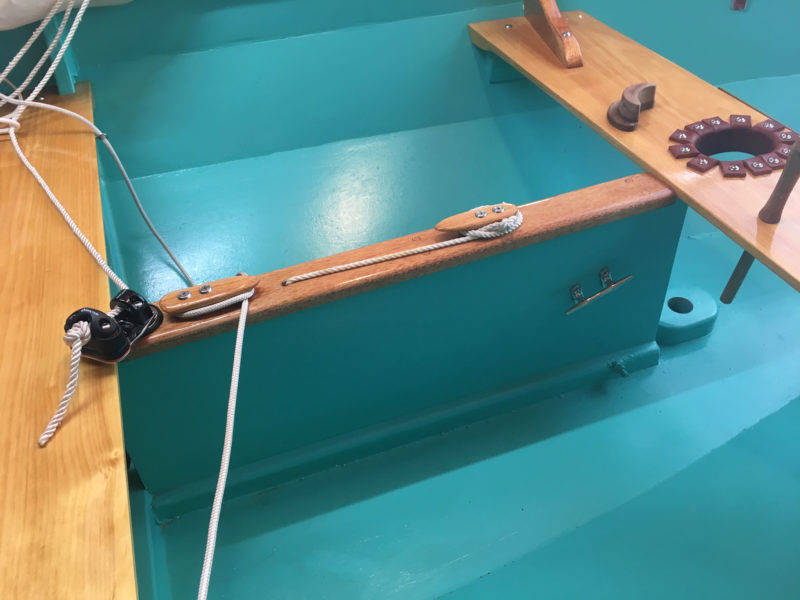 The plans don’t call for floorboards, but they’re easily added to separate the occupants from water in the bilge. Note the elongated hole for the mast and crescent-shaped plug on the thwart. The plug goes forward of the mast when the jib is used, and aft for sailing with the main alone.

The Pooduck Skiff materials list calls for 3/4″ (18mm) mahogany marine plywood for the bottom and transom and 3/8″ (9mm) for the planking. The 12′ and 14′ sheets called for may have been available when the plans were drawn up in 1990; the 8’ sheets available today will need to be scarfed together to get the necessary length for the planks and the bottom. Solid mahogany is specified for the gunwales, breasthook, knees, and trunk cap; white pine for the thwarts; oak for the maststep and jam cleats. I wasn’t able to purchase mahogany in lengths sufficient to form the gunwales, so there was some scarfing done here as well.

The center frame is laminated from twenty 1/8″- thick strips cut from dimensional lumber. The plans call for fir or mahogany, but Steve suggested sawing the strips from clear 2×12 spruce. The quality of 2x12s is better than that of 2x4s because they come from bigger trees, and usually have fewer knots. I cut more strips than I needed and selected only clear strips from the best part of the 2×12. It’s best to buy quality lumber, so I avoided the big box stores and went to my neighborhood lumberyard.

The mast and spars are also made of spruce. The plans recommend using two clear 2x4s for this.  As with the spruce we used for the frame, I found the quality of 2x12s to be better. With a little care, one can select the optimum pieces from the best part of the 2×12. A portion of it may go to waste, but the added expense is minimal.

An advanced builder could do it alone, but I had an extra pair of hands when attaching the planks. I found there to be a little variation between the planks as drawn and the shapes determined by the molds (as one should expect), which necessitated having a helper to locate each plank and refine its shape. Likewise, it was also nice to have someone around to help align the drill when drilling the pilot holes for fastenings, especially where the planks meet the transom.

For a bit of style I strayed from the plans, and instead of using a single piece of pine for thwarts in the bow and stern, I used leftover 18mm marine plywood to make slat seats. I used the same material to make floorboards. The one frame in the boat is under a thwart, so it’s possible to find comfortable seating anywhere in the bottom of the boat, but I’d rather be seated above any water that might get aboard. I also added two Shellback-style knees made from solid mahogany to the thwart that serves as the mast partner for additional strength. I adhered these to the hull using 3M 5200 marine adhesive instead of epoxy so it would be possible to remove them if necessary, to touch up the paint. The transom is drawn with a notch for sculling, but I didn’t include that in my boat because I had no intention of propelling it in that manner.

The boat is light, only about 200 lbs even with my extra features, and it trailers well. I treated myself to a brand-new trailer which came with two flat, carpeted bunks. They mate pretty nicely with the flat bottom of the boat. I use a ratchet strap to secure the boat to the trailer, with rags under the straps where they meet the gunwales to prevent chafing.

Empty, the Pooduck Skiff draws only about 6″, which makes it easily managed on the beach. Getting in and out of it isn’t bad either, though you have to get your weight planted in the center or have a shipmate holding the opposite side, or you may have a couple of gallons of water come over the side. It’s easier moving in and out of the boat while it is at a dock because you don’t have to climb over the gunwale. Once you’re aboard, the skiff is stable enough to stand in while afloat.

While rowing, Pooduck moves right along with little effort and tracks very well. With one person rowing, the skiff sits right on its lines with the transom just out of the water. There is plenty of room and freeboard to accommodate three average-sized people. 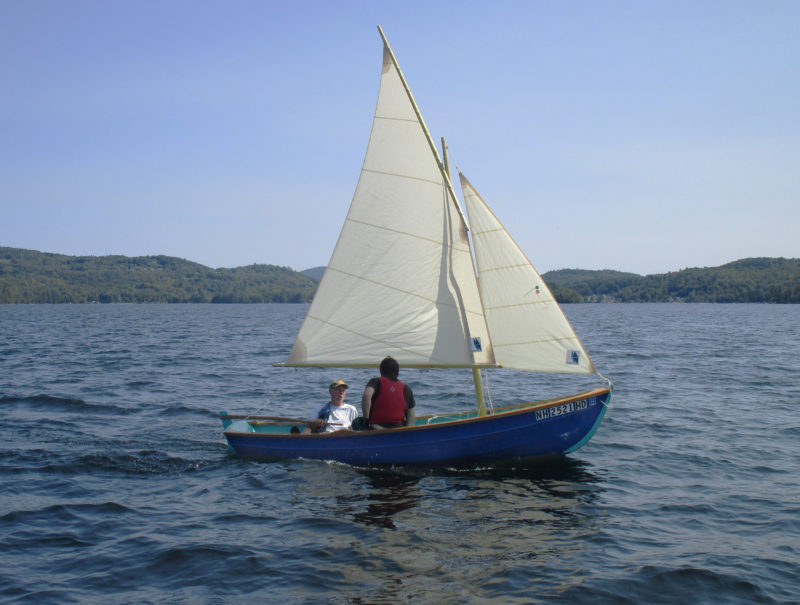 The option to shift the rake of the mast helps keep the rig balanced. The mast is angled aft here, shifting the main’s center of effort aft to compensate for the addition of the jib to the sail plan.

I found that rigging for sail is best done on the trailer. The running rigging consists of the main halyard, sheet, and downhaul and the jib halyard and sheet. It can get a little awkward keeping them all straight and in the proper position if the boat is bouncing in the surf or spinning in the wind.

Under sail, I found it somewhat difficult to move from sitting on the floor to a position up on the gunwale. This winter I plan to extend the middle seat to provide an intermediate place to sit. Under sail, two adults are the limit. My buddy and I are both about 5′6″ tall, and I suspect two large individuals would feel a bit cramped for space.

The skiff sails equally as well with or without flying the jib. The hole in the thwart that serves as a mast partner is elongated and equipped with a crescent-shaped plug, allowing the mast to be angled and maintain the rig’s balance when shifting between sailing the main alone or main and jib. I’m not an experienced sailor, but I couldn’t tell the difference between sailing her with or without the jib. She seemed to beat to windward equally well under main alone or main and jib. Sailing without the jib is much easier, as you have less to do and there are two fewer lines to tend to. 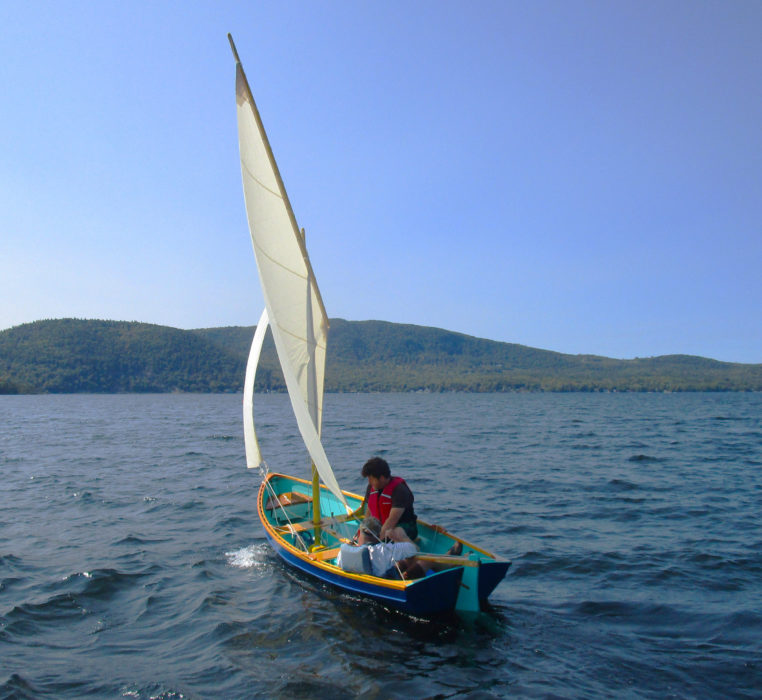 When taking the helm, sitting on the bottom is the most convenient position. Floorboards make that a more comfortable option when some water gets aboard.

On one occasion, my inexperience led to capsizing in a strong gust. The skiff righted easily, but this is mostly because it was full of water. I did not have an easy time bailing out and I was not able to get back in without refilling the hull with water. I had to be towed to shore, with the boat half swamped. The incident turned out okay because I was on a small lake, but it got me thinking about equipping the boat for self-rescue. Flotation isn’t mentioned in the plans or Dow’s book, but I’d recommended at least adding some foam under the two center seats as close to the bottom as possible.

Building a Pooduck was everything I had hoped it would be; it was challenging enough to make it feel like a real accomplishment. It was an enormous learning experience with many take-aways that I can apply to other projects down the road. I’m proud of the way it turned out. The Pooduck’s design provides a true feel for traditional boatbuilding. It is well suited for rowing but is just gorgeous under sail. I receive compliments every time I take the boat out, and I have already begun to meet others who took on similar wooden boat projects.

Tom Guertin lives in Warner, New Hampshire, 15 miles from Lake Sunapee and near several other lakes. His love of boats began in his youth fishing on Long Island Sound, not too far from Mystic Seaport. He sails, paddles, and fishes for bass in the many lakes of New Hampshire’s Lakes Region. He works for the State of New Hampshire’s Department of Environmental Services. 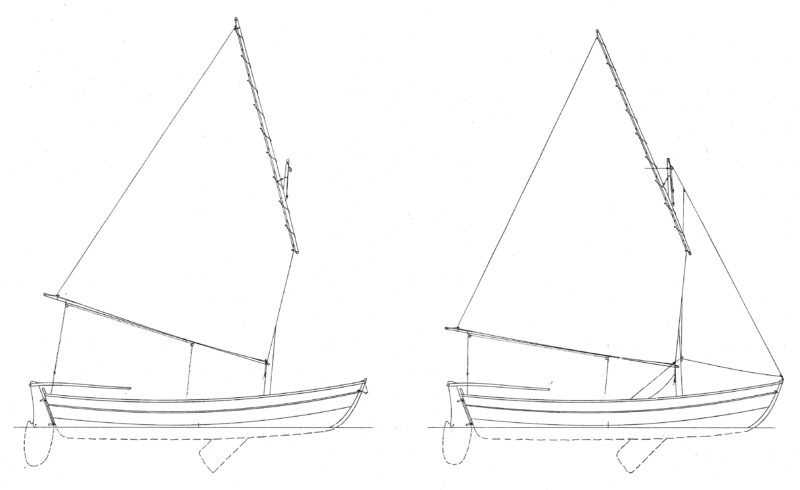 Plans for the Pooduck Skiff are available from the WoodenBoat Store for $75.