Born by a beautiful bay

Arey’s Pond is a green, bowl-shaped jewel, one of several ponds in Orleans, Massachusetts, that give access, through narrow, winding waterways, to Little Pleasant Bay and, just to the south, Pleasant Bay itself. The pond is covered with various examples of that boat type most indigenous to Cape Cod, the catboat. There are good reasons for this. A wise adage worth remembering when boat shopping admonishes: “Get a boat suitable for your local waters.” On Cape Cod, that means shallow waters, sand bars, and, often enough in the afternoon, a brisk southwesterly wind. Catboats were born for this environment.

Tony Davis, proprietor of Arey’s Pond Boat Yard, has been building well-regarded catboats since the late 1990s. Today, his offerings range in size from 12′ to 22′, and there are enough models that one might think every potential customer’s needs would be met. But that assumption would be incorrect. “The couple who commissioned the Caracal’s design,” Davis said, “wanted a boat suitable for themselves and a crowd of kids. But they found nothing available that combined the really big cockpit necessary with a small cuddy that provided space for a portable toilet and room to take a nap.”

Thus was born a new model that Davis named for the caracal, a small, fleet-of-foot wildcat native to Africa and points east. As Davis probed the buyers’ preferences, a number of requirements emerged that would influence the design. “I asked if the boat would be primarily a daysailer for Pleasant Bay or whether it would also be going to the Vineyard.” The “Vineyard” is Martha’s Vineyard, the popular Massachusetts offshore island, and getting there would require a higher level of seakeeping ability than would Pleasant Bay. “The answer,” said Davis, “was ‘Pleasant Bay.’ I asked if they might sometime want to start racing. The answer was ‘yes.’ I asked how many people the cockpit must seat. The answer was ‘six to eight.’”

With those questions answered, Davis began the design process in September 2013. As it happened, he’d been thinking about just such a boat—a daysailer for Pleasant Bay—for quite some time. Years earlier, he had “sharpened up the bow” on the popular Arey’s Pond 14, and that experience would be reflected now. In catboat terms, “sharpening up” the bow means reducing the traditionally full shape of the forward-most hull sections. That fullness had long been necessary to provide the structure to support a heavy wooden mast. But, knowing the Caracal would doubtless find itself racing against several catboats with comparatively fine, hollow bow sections and an aluminum mast, Davis made a water-slicing, sharp entry a key element of the new model.

There were, of course, other considerations. The owners wanted their new boat to have a varnished transom unencumbered by an outboard motor. “I pushed for an inboard electric,” Davis said. The 2 ½-hp Mastervolt motor’s compact dimensions and aft location allowed him to include an appropriately sized—that means big—centerboard. Such a centerboard is key to a catboat’s windward performance. “We got the board the right size and located it exactly where we wanted,” said Davis. “Especially when reefing, which moves the sail’s center-of-effort forward, the board needs plenty of surface area to help maintain performance and balance.” (The boat’s 24-volt lithium-ion battery, incidentally, is located in a sealed, portside cockpit locker just forward of amidships.)

The big centerboard would work hand-in-hand with the Caracal’s comparatively large 290-sq-ft sail. “I asked the owners if they would be okay with having a big sail to drive the boat well in light air, even if it meant putting in the first reef at around 8 to 10 knots of wind. They agreed.”

Although a 290-sq-ft sail on a 19′ catboat might impress sailors today as large and daunting to handle, it would have seemed quite normal or even a bit small to catboat sailors of the late 19th and early 20th century. That said, Caracal’s 12-degree angle of the fully peaked gaff, though comparable to many modern catboats, would have been unusual in the past. Then, gaffs were peaked noticeably lower.

The result of a high-peaked gaff is improved windward ability. However, such gaffs impose challenges when it comes to how well they function as the boat moves from one tack to another. Caracal meets the challenge with a nicely crafted gaff saddle rather than jaws. It lies flush—some saddles may occasionally tip and bind—and functions smoothly as the boat comes about. A custom bronze gooseneck serves as the mount for the halyard and topping-lift blocks, and locates them well away from the mast. This means that the throat and peak halyards and topping lift don’t cause friction on the mast hoops as the sail is raised and lowered. These are all small but important matters vital to the satisfaction and even safety of catboat sailing.

Caracal is equipped with the transom-hung “barn door” rudder typical of most catboats, then or now. “Rudder design is so critical,” said Davis. “Too small and the boat gets squirrelly. Too big and it drags.” Caracal’s rudder has an endplate along its bottom, a feature long advocated by designer Phil Bolger as a way to add area and maintain good steering performance as a boat heels. Davis has found the end plate effective in terms of steering performance while also reducing turbulence.

Davis’s design process begins with hand-drawn hull lines that are later transferred to a computer-aided design program for final development. Although Caracal was initially anticipated to be an 18-footer, as Davis worked on his drawings, he found it necessary to extend the hull by a foot in order to gain the flowing underwater lines he desired. In addition to performance considerations, Davis had aesthetics very much in mind as he developed the boat’s shape. “The hull was totally an artistic adventure,” he said. “I didn’t want the boat to look similar to the competition, for one thing.”

In fact, Caracal is quite distinctive. Unlike the near-vertical stems most commonly seen on catboats, Caracal’s stem curves aft, forming a canoe-like shape evocative of many 19th-century catboats. With much refinement, Davis came up with a handsome sheer line that sweeps from the not overly high bow to the transom. The cockpit coaming is high without looking awkward. Combined with the deep cockpit, the coaming affords a great sense of security, whether for adults or kids. The little cabin’s top has a generous crown to maximize headroom.

Caracal is built of interlocking pine strips over laminated fir frames spaced on 2′ centers with additional frames installed in the forward and aft hull sections for extra strength. Once the hull is planked, it receives a layer of fiberglass inside and out. Finally, two layers of Dynel fabric are applied to the bottom for extra protection in case of grounding. An Awlcraft paint finish is applied; it offers the durability of Awlgrip but is applied by roller rather than by spraying.

Although about half of Arey’s Pond catboats have carbon-fiber masts to minimize weight at the bow, Caracal’s owners opted for a hollow spruce mast. That said, Davis reports that material prices and labor costs are approaching the point where carbon fiber is becoming competitive with a hollow wooden spar.

While one would expect the cockpit of a 19′ catboat with a minimal cabin to be large, one really needs to go aboard Caracal to see just how much room there is. It’s a comfy place and there is ample storage beneath the long seats. There’s a centerboard trunk-mounted table and cup holders. A cup holder is also built into the cockpit cushions on either side of the helm. What a concept!

A convenient chart holder was fashioned atop the motor hatch. The coaming’s interior is sheathed in vertical staving reminiscent of catboats of yore, and adds a very definite “wow factor” to the boat. A full cockpit cover keeps out rain—the cockpit isn’t self-bailing—while protecting the varnished woodwork. Bronze cleats and a stout tiller complete the sense of having a boat with strong ties to a storied past.

Typical of catboats, Caracal feels substantial when one steps aboard. A first and lasting impression at the tiller is that the boat feels bigger than its actual length. On the day of our test sail, the wind, alas, fell light. However, this 2,400-lb catboat can make progress in light air thanks in large part to her fine bow sections and big sail.

Perhaps the most revealing display of the boat’s potential came at the 2014 Arey’s Pond Catboat Gathering, an event that attracted an impressive 102-boat field. The race was sailed in a 10-knot wind, a perfect whole-sail breeze for Caracal. The boat placed first overall against some very competently handled, fast catboats.

“Well,” Davis said, “it was a good test but not the same as an around-the-buoys race because there was more chance for a boat to get into bad air while others did not.” Still, for those considering a Caracal who might be interested in racing, it was a result—like the boat itself—to be reckoned with.

Stan Grayson is a regular contributor to WoodenBoat.

Included on their web page devoted to the Caracal is the video below, showing the Caracal under construction and under sail: 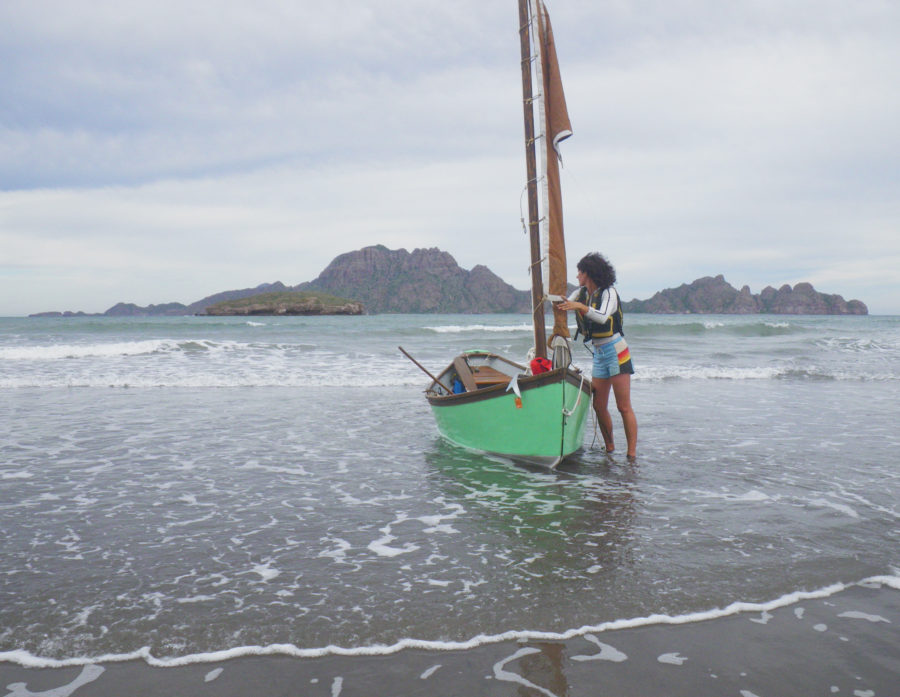