The Pinguino 145 is a stitch-and-glue plywood sea kayak that comes as a kit from Pygmy Boats in Port Townsend, Washington. [The company closed in 2020. —Ed.] An alternate version, the 145 4PD (it has a four-panel deck), has a lower deck than the 145, on an identical multichined hull. With a beam of 25.5˝, the Pinguino isn’t as svelte as most of Pygmy’s other single kayaks, but its ample midsection offers good cargo capacity for a 14´6˝ kayak and very comfortable stability. Epoxy and 6-oz fiberglass give the 4mm, three-ply marine mahogany plywood strength and durability while keeping the weight down to an easily shouldered 36 lbs.

The 145 I paddled had an optional large cockpit opening that makes it very easy to get in and out. If having your legs tucked under a kayak deck makes you anxious, the 19˝ x 36˝ opening should put you at ease. I had plenty of room to pull my knees up for working out the kinks out and lounging about while afloat. The aft deck and the backrest on the 145 came to about mid-back on me. That limited layback for rolling but didn’t interfere with torso rotation while I was paddling. The 145 4PD has Pygmy’s standard 17˝ x 33˝ cockpit opening with flanges to accept adjustable and easily modified foam thigh braces. The fit of the 145 4PD was ideal for rolling and advanced boat control.

The seat is a simple affair: a self-inflating Therm-a-Rest pad Velcroed in place. With just the right amount of air bled out through its twist valve, I could float my sit bones just above the hull and have comfortable, evenly distributed support. The optional molded foam seat with integral hip pads would make the connection to the boat more solid, especially for paddlers with hips narrower than mine.

The Keepers foot braces are an industry standard. Their plastic pedals slide on aluminum tracks bolted to the hull. The pedals have locking levers that are easily operated by foot. Hook a toe on the far side of the pedal and pull, and you’ll trip the lever and move the pedal back. Hook a toe to trip the lever with one foot and push the pedal with the other, and it will slide forward. The foot room provided by the beveled edges of both the 145 and 145 4PD decks offered enough clearance even for my size-13 neoprene booties.

The hatch covers are cut from the deck after it has been glued and ‘glassed. Three straps with cam levers press each hatch tight against the foam rubber gaskets and flush with the deck. The levers have jogged edges to keep the straps from releasing accidentally. Earlier versions of these levers were smooth-sided, and the plastic loops that held them against the webbing could be disengaged by an errant sweep of a paddle or a kayaker climbing back aboard after a capsize. These more recent levers are secure without being difficult to disengage by hand. The hatches are as watertight as you make them. The straps must be adjusted to provide proper tension, and the gasket must be intact and clean to provide a good seal. Don’t be tempted to use the hatch cover straps for securing paddle shafts or deck cargo; they have a more important job to do. Rigging the hatch covers with internal tethers is always a good idea.

The deck lines are anchored with a combination of plastic pad-eyes and bolted loops of nylon webbing. Both of the Pinguino models I paddled had bungee patterns for holding gear both forward and aft of the cockpit and safety grab lines around the decks. I like to keep a backup take-apart paddle on deck, so I’d add lines to hold the shaft ends. As a builder you could easily modify or add to the arrangement. Thickened epoxy poured into each end while the kayak is stood upright allows you to drill holes through the stems for bombproof grab loops. 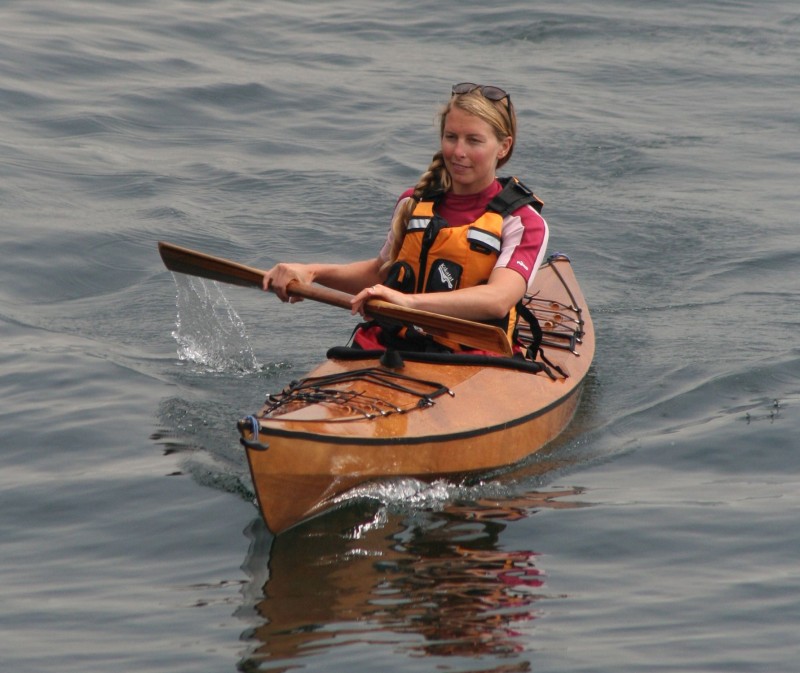 The Pinguino’s initial stability is exceptionally high. Angle your hips just a few degrees, and you’ll get nudged back upright, well before you start to feel twitchy. It’s quite well suited to relaxed paddling, fishing, and photography, or just hangin’ out, pursuits where you’re expecting the kayak to take care of itself and you. For more aggressive paddling, the Pinguino’s secondary stability provided me with solid support for edged turns. The righting force stayed quite strong with the sheer just submerged, and began to soften up as the coaming touched the water, but by then I was at the limit of my flexibility.

The 145 4PD sacrifices a bit of cargo capacity for a lower profile in the wind and a more compact fit. Its cockpit coaming rests on a deeply recessed deck panel, and a nicely sculpted piece provides a graceful transition to the peaked deck. The coaming and the backrest are significantly lower than in the 145; the layback clearance was excellent. Only the padding on my PFD kept me from getting my head to the aft deck. That position was not only great for rolling, but quite restful as I looked up at the sky.

On both versions, the Pinguino hull held a straight course while underway. The bow yawed perhaps 3˝ between strokes at a slow pace, about half that at speed, and had no tendency to stray off course. There wasn’t a rudder on either Pinguino, and while one is available as an option, I didn’t feel the need for one. The Pinguinos went where I pointed them, and almost any kayak can make tighter turns without one. The Pinguino turned quite nicely when edged. It continued to carve between strokes and even when I stopped paddling. When I put a strong edging on the kayak, the turning radius tightened but the stern didn’t skid around. While having the stern skid can be handy for maneuvering in tight quarters, it kills speed. By favoring carved turns, the Pinguino carries momentum well.

I did some speed trials in the still waters of a marina, and with a GPS I logged 4 knots at a relaxed all-day pace, fast enough to match the average pace of a group of average kayakers. I could hold 4 ¾ knots at a fast sustainable aerobic effort, and peaked at 5 ¾ knots. Those aren’t racing numbers, but that’s not the sort of kayak it’s meant to be.

All of my paddling in the 145 and the 145 4PD has been during the summer “doldrums,” so I haven’t had much wind for my sea trials, but I have yet to paddle a Pygmy kayak that can’t manage a crosswind without making a fuss. Pygmy designer John Lockwood seems to have found the sweet spot of boat trim where the lateral resistance above and below the waterline are in balance, and his kayaks aren’t plagued by a tendency to weathercock.

For rolling and self-rescue drills, I much preferred the 145 4PD for its lower aft deck and snugger cockpit. Rolling was a cinch, especially when I used a layback rolling technique. A long sweep of the paddle brought me up on the aft deck with minimal effort. Wet-exiting after a capsize wasn’t hampered by the standard cockpit’s shorter and narrower opening. The Pinguino’s light weight made it easy to empty water from the cockpit. I could lift the bow of the capsized kayak and hold it high while the water drained out. After I let the kayak roll itself upright, only a couple of pints of water remained in the cockpit. To reenter from the water I was able to get up on the aft deck with a single kick and lunge. The opening of the standard cockpit was long enough for me to get back aboard seat-first, then feet—a quicker and more stable method than having to slide feet-first into a shorter cockpit. The reenter and roll was also easy. I could slip into the capsized kayak by setting it on edge; then as I submerged, I could quickly lock myself in and roll up.

The Pinguino 145 and 145 4PD are versatile kayaks, even though they are a couple of feet shorter than most standard touring kayaks. It’s a well-mannered design with a respectable cruising speed and a good amount of cargo space for carrying several days’ worth of camping and cooking supplies. Its high stability makes it a platform well suited to a variety of non-paddling activities. If you’d like to develop your skills as a kayaker, I’d highly recommend the 145 4PD for its lower profile. It doesn’t sacrifice much carrying capacity for the other advantages it offers.

Christopher Cunningham is the editor of Small Boats Monthly. He has been building kayaks and other small boat since 1978. 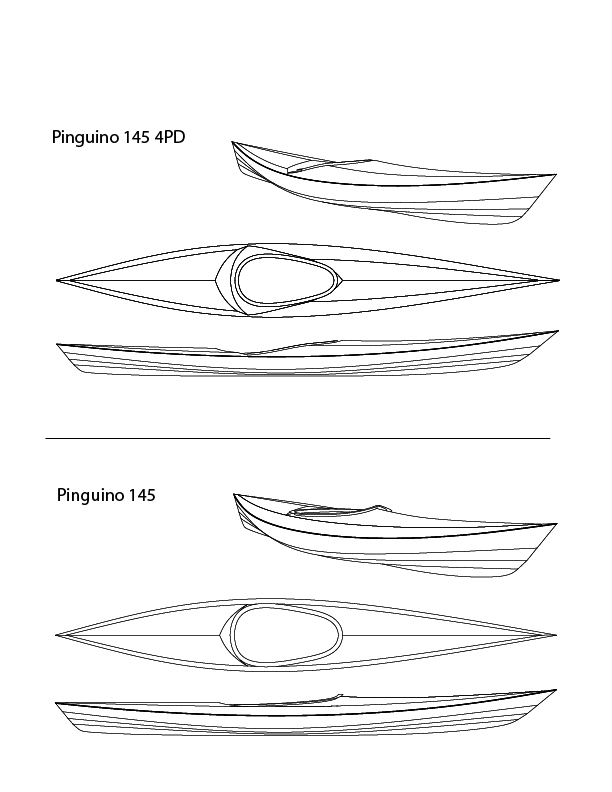 Pygmy Boats has been closed since the outbreak of the  pandemic and isn’t filling orders. The review is now presented here as archival material.

In September 2013 I was perusing the Internet and stumbled onto a forum about an adventure race called the Everglades Challenge (EC). Intrigued, I found the homepage of an organization…

I enjoy sleeping at anchor. There’s something soothing about the gentle rocking of the hull. Gentle rocking. I don’t enjoy being jostled about when waves find their way into what…

The most common and useful electronic device aboard large boats is undoubtedly the depthfinder—it keeps them from running aground. With most small boats you can often see the bottom before…