Here’s a boat type one doesn’t see too often these days. It’s a modest-sized outboard designed not as a center-console but instead with a small cabin that will accommodate the adventurous camp-cruiser. For the less ambitious, it’s a boat that offers a place to have a nap, use the head in privacy, or take friends and family to a favorite beach, island, or fishing spot. Given its varnished cabin sides and shapely hull, it’s just the sort of craft that stops dock strollers in their tracks as they say: “Now what is that!”

This is really a boat that belongs to another era but one that, for several reasons, is well worth another look today. Plan Number 283 was developed by Samuel Sturgis Crocker in 1954. Crocker, a naval architect who trained at the Massachusetts Institute of Technology, was then 63 years old and well on his way to a portfolio that would eventually number 344 designs. While sailors most often associate Sam Crocker with his stout and able cutters and ketches, the designer himself enjoyed smaller boats very much. “Sam was more a daysailor and racer,” said his grandson, Skip, who is now the proprietor of Crocker’s Boat Yard, which his father founded in 1945 in Manchester-by-the-Sea, Massachusetts. “He loved being out on the bay. It didn’t matter how far off another sailboat was. He was racing it.”

Sam Crocker’s work also included powerboats, and No. 283 was designed expressly for Paul Whitin, a member of the Arundel Yacht Club in Kennebunkport, Maine. While the design is distinctive by any measure—just look at those shapely ports in the cabin sides—it’s her rather modest beam that might impress us today as unusual. In a retrospective article for Small Boat Journal in 1980, Whitin wrote: “Her 6′8″ beam made her an easy pushing boat and very economical to run. With the 18-hp Mercury, she planed off nicely with a top speed of 14 knots.” One would expect a contemporary hull this length to be as much as 20″ broader and have a 90- to 115-hp outboard on the transom. Today, this boat goes about her business in a notably quiet, fuel-sipping manner with a 40-hp motor.

A study of Crocker’s cabin plan quickly reveals what Whitin had in mind for his new boat. The drawings show a modest V-berth in the forward part of the cabin with open storage beneath. To port, between the bulkhead and berth, the plans show a single-burner alcohol stove outboard and a toilet inboard hidden beneath a box with a hinged lid. To starboard, by the bulkhead, is a convenient, small locker.

Whitin named his boat ’Long Shore (after a favorite book of poems) and, as far as he was concerned, it had “real cruising capability.” He wasn’t kidding. Besides trips along the Maine coast, Whitin trailered ’Long Shore to Moosehead Lake, Sebago Lake, and down to Buzzards Bay, where he visited Cuttyhunk “many times.” Whitin sold ’Long Shore after five years, replacing her with a 30′ version “though still outboard-powered and still designed by Crocker.” There was no way he could then have known that one day, some 20 years later, design No. 283 would once again enter his life.

“In the fall of 1978,” Whitin wrote, “I had a mild heart attack.” His options were to give up motorboat cruising for daysailing or buy a smaller motor boat. He drove down to Manchester to talk with Sturgis, who expressed interest in building the boat. A deal was made, the plans reviewed, and molds built.

“She was a winter project,” Skip recalled when I visited. “We built her upside-down right here in this office where we’re sitting now.” I looked around, trying to picture the building as it once had been.

“Do you still have the molds?” I asked. “No, the molds got turned into that flight of steps you just walked up here on.”

The new ’Long Shore was built, as was the original, of 3/4″ x 3/4″ pine strip-planking fastened with 2″ galvanized finishing nails and two-part resorcinol glue. The keel, 7″ deep at its after end but tapering down forward, was made of oak. A little coal stove was mounted atop the starboard-side locker, the Charley Noble poking through the cabintop. Curtains were made for the cabin side windows. The boat also was fitted with a bimini, a nice touch, to shade the cockpit.

This time, Whitin powered the boat with a much bigger motor, a 50-hp Mercury. The idea—and it worked out well enough—was that the 50 would seldom need to be run at more than one-half or two-thirds throttle. With a 12″ x 13″ propeller, the engine delivered 4 mpg. Not only did Whitin and his wife cruise to new destinations in Maine, but they made a five-day September voyage from Kennebunkport down to Manchester and then returned home. All this is impressive going for a 19′6″ outboard-powered boat with two aboard, but it also suggests something about Whitin’s seamanship skills. For safety’s sake, boating newcomers would be advised to gain useful experience in local waters before undertaking something so ambitious.

Details of ’Long Shore’s life after Whitin sold her are largely unknown, but the boat’s journey took a surprising turn in the mid-1990s. “One day when I was about 25 years old,” Skip said, “the second or third owner drove in with the boat. It was quite a surprise to see it. I remembered watching it being built when I was a kid. I told him that if he ever wanted to sell it, he should give me a call.”

Several years later, in 2005, the owner did just that. “He was asking such a low price,” Skip remembered, “that I thought it must be full of leaves and rot and I didn’t follow up.”

Eventually, however, Skip found himself in the owner’s neighborhood and called. He found the boat wasn’t in disrepair. In fact, it was in the owner’s garage where the brightwork had been stripped and the mahogany stained. Skip bought the boat, sold the old Mercury and, eventually, began working on ’Long Shore. He replaced the cabintop, which had been weakened by the addition of a hatch, and then replaced the beams beneath it. New floors were installed. Stern seats and rod holders were added, and so was a new helm station. Finally, the boat was entirely refinished. Skip launched the boat into the Essex River and spent a fun summer that included family outings to beautiful Crane’s Beach on Ipswich Bay.

The long keel helps this boat run straight. The soft chines—the area where the bottom meets the hull sides is rounded by comparison to a hard-chine’s sharp angle—deliver a soft ride but permit somewhat more roll in a beam sea. During our outing, there wasn’t much wind but there was a swell rolling in from Massachusetts Bay over Whaleback Rock in between House Island and Misery Island. The boat cut easily through the swell and, had Skip not been so busy at the yard, it would have been tempting to pass beyond House, turn to port, open her up, and dash east to Gloucester for lunch. As it was, we headed for home and soon entered the no-wake zone that leads to Manchester’s well-protected harbor.

As outboard motors became increasingly reliable before and after World War II, small, outboard-powered “cruisers” appeared with some frequency in boating and do-it-yourself magazines. These days, some such plans still remain for purchase. Crocker’s No. 283 differs from most such boats, however, as it was never intended for amateur construction. Lofting is required, and molds would need to be built.

Skip estimated that a skilled home-builder would likely be able to turn out a credible version of this boat with about 1,500 hours of work, or a year’s time working solo. Fiberglassing the completed hull would add durability and permit a handsome finish that could be expected to last for years. Material costs for such things as pine, oak, plywood, and hardware, might total approximately $5,000, depending, in part, on whether the hardware is stainless steel or the more expensive bronze. Skip’s boat has the original, opening bronze ports in the forward cabin coaming.

Given the weight of today’s outboards, beefing up the transom would be recommended. “There’s a strong knee that reinforces the transom,” Skip said, “but we’d want to increase the transom thickness by an inch.” Because a comparatively heavy outboard could make the stern sit a bit lower in the water than originally intended, a 40-hp model should be considered the maximum for the boat.

Skip has thought about the boat’s sales potential and believes it could be built at a price competitive with higher-end fiberglass boats of its general size. He also thinks the hull would make for a wonderful, open boat, modestly powered, and with tiller steering. All things considered, this early-1950s outboard is worth a look from those with an eye for good looks, practicality, and fuel efficiency.

Stan Grayson is a regular contributor to WoodenBoat. 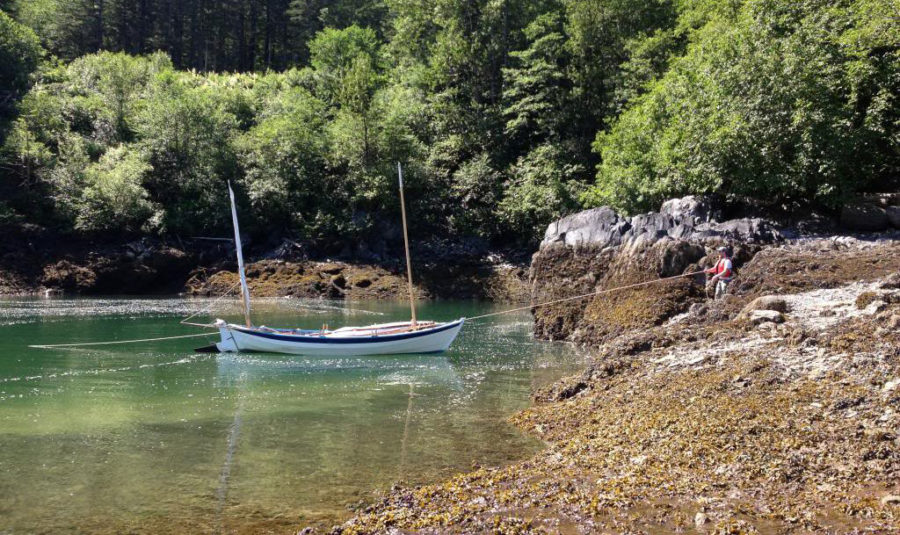 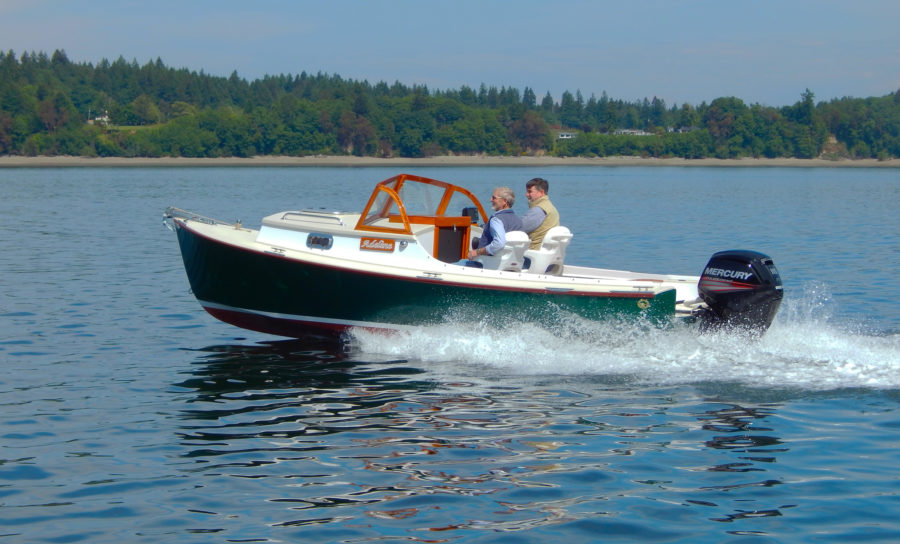 Having owned several larger cruising boats, I thought a simple, lightweight, and easily trailerable boat would be great way to downsize. For years, I’ve admired the designs of Sam Devlin, and…