Written by   Kent and Audrey Lewis

We have 15 small boats and certainly didn’t need another one, but in talking with Maynard Bray, WoodenBoat’s Technical Editor, about the best options for small boats that families could build together as well as for introducing our granddaughter to boats, he said, “You should build her a Nutshell Pram.” That planted the idea in our heads, and we bought the plans, to look them over. When we got bored this past winter, we decided to build the little Nutshell. We’re very happy that we did.

The Nutshell was designed in 1983 by naval architect Joel White. “This little packet,” he wrote, “grew out of a discussion with Jon Wilson and Maynard Bray over the winter about why so many designs for plywood boats are complicated, unattractive, and unsuccessful.” He emerged from the conversation with Maynard and Jon, WoodenBoat’s founder, to design a good-looking pram that would be easy to build with 8′ plywood sheets, consisting of only 27 parts for the rowboat version. Joel built the first of the prams, and almost four decades later Maynard still has the prototype and Jon’s family still has the first production model.

Although kits are available, we chose to build our Nutshell from scratch using the plans and Maynard’s 1987 book, Building the Nutshell Pram, as our guide. Its 32 pages guide the builder through the steps of putting the pram together as well as rigging information for the sailboat model and sailing tips. The Nutshell’s glued lapstrake construction offers tremendous strength to the hull and ease of construction, and the traditional pram shape brings out the attribute of workboat utility.

The pram is 7′ 7″ long and 4′ wide, making it small and portable. It was designed as a tender, one that would row, tow, scull, and sail. And at 90 lbs it is light enough to haul up on a mothership’s deck where it would take up very little space.

The 28″-wide flat bottom and hard chine provide reassuring stability when stepping into and out of the Nutshell. A pair of 6′ oars are a good fit at both rowing stations, with no overlap of the handles. I’m 5′ 8″ and have plenty of knee clearance on both the ’midship and forward seat. The oars tuck off to the side inside the hull when sailing. The oars can also be stowed over the gunwales port and starboard, each pair in oarlocks at the two rowing stations. Rowing the pram is a pleasure; it responds immediately to the slightest flick of an oar and easily spins in its own length, handy when maneuvering around docks and moorings. The hull draws just 5″, useful for getting into puddles of water where no other boats dare to go. The keel, with its integral skeg, keeps the pram tracking straight, and with minimal effort it will carry a boat length or two for each stroke. The Nutshell handles a steep chop well, and the high sides keep it dry. When rowed into a fresh breeze, the boat’s short length and light weight require minimal effort to control.

A sculling notch is placed top center of the transom. We are not experienced scullers, but for 40 years Maynard has used his Nutshell to get to and from his boat in a crowded mooring and sculls it almost exclusively.

Sailing the Nutshell is delightful! The daggerboard trunk is offset to starboard; this preserves the uninterrupted length of the keel, which makes it easier to pull the Nutshell onto a dock or a deck. The 37-sq-ft balanced lugsail is set on the lightest mast you’ll ever step, laced to the yard, and set loose-footed on a tiny boom. It is exceptionally easy to rig: one sheet and one halyard, with the halyard secured to a cute belaying pin. The boat draws 1′ 9″ with the daggerboard down and points about as high as you’d expect a balanced lug to point, which is not especially high, but sails well through all other points of sail. Jibes are easy to control, and the tiny boom isn’t likely to do too much damage to the noggin of a skipper who fails to duck. The Nutshell is well suited for junior sailors, yet it has room for two adults to sail comfortably. The pram can be sailed from the aft or middle seat, or the bilge, and when sitting in the bilge the sides of the boat provide comfortable backrests—almost too comfortable if one wants to stay awake. The plans include a way to make the middle thwart removable to free up space for the solo sailor to move closer to the daggerboard trunk to balance the boat fore and aft, although we found it fun to sit a bit aft to raise the bow and spin the pram around in pirouettes on its stern.

Joel gave the Nutshell a shape that rides well under tow; the angled bow transom and the V sections of the garboards below it ride over waves easily, and the full-length keel keeps it towing straight. The painter is led through a hole in the bow transom and secured to the laminated fore keel. For towing the sailboat version of the pram, the daggerboard trunk must be plugged to prevent water from spouting through it and swamping the pram. Maynard’s book shows a short board to fill the trunk and a gasketed cap to seal the opening; a pin keeps it in place with the gasket pressed tight.

The uncluttered interior simplifies cleaning, varnishing, and painting. There are not a lot of nooks and crannies to conceal dirt and water. However, the space under the mast partner needs to be peeked at and kept clean and dry when in storage.

The Nutshell takes up little storage space and it is extremely portable. We keep ours on a dolly and use our utility trailer to haul it to beaches with ramps so we can access skinny water. Cartopping is also a practical option that offers up additional launch sites that can’t accommodate trailers. The 7′ 7″ × 4′ footprint will fit in the bed of a standard pickup truck, even one with the short bed popular today.

The Nutshell Pram has classic looks, is small, simple, and affordable, provides refreshing relief from the complexity of larger boats, and does the job for which it was designed exceedingly well. We join Maynard in believing that the Nutshell Pram is Mr. White’s best design. Thousands of Nutshells were built during the first decade of the design being offered. “Can’t beat ’em,” Maynard says.

Kent and Audrey Lewis named their Nutshell EXCUSE ME; the pram will seek prizes in the waters of Hampton Roads. Its build log and adventures are found at Small Boat Restoration. They wish to thank to Maynard Bray and Eric Dow for sharing their extensive knowledge of the history, care, and feeding of the Nutshell Pram. 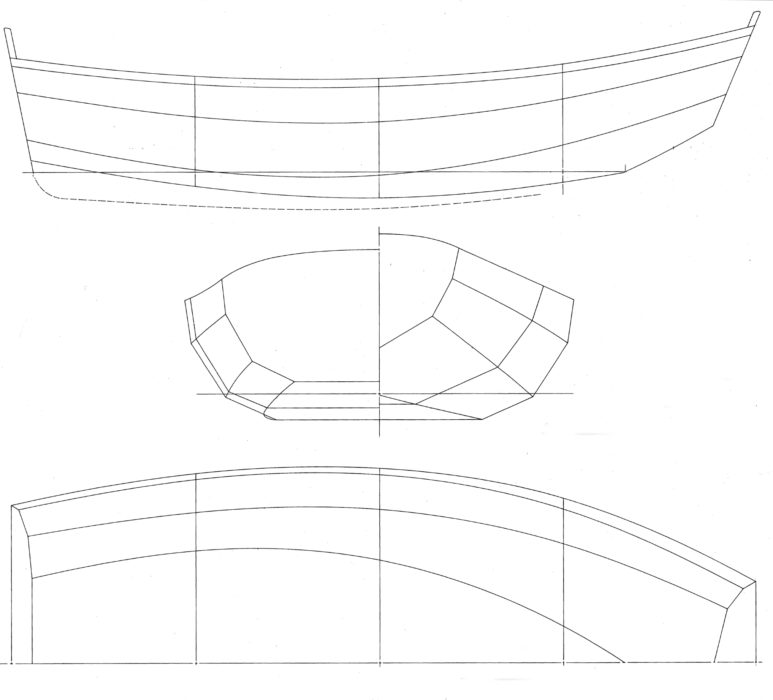 The WoodenBoat Store offers Nutshell plans ($75), kits (rowing version $2,500, sailing $3,000), rudder hardware ($154), Bray’s Building the Nutshell Pram, as well as sails and rowing and sailing hardware kits. The same items are available for a 9′6″ version of the Nutshell.