Back in 2004, I was looking for a boat to take us to our cabin on Galiano Island, one of the Southern Gulf Islands in British Columbia. We can only get to the cabin by boat, so I needed something that would safely and reliably transport my family of four, our dog, and enough provisions for a week through what are sometimes pretty rough conditions. I was drawn to the Bartender design for its reputation as a capable rough-water hull, for its beautiful lines, and for the fact that it would fit in my garage, which is also my boat shop.

The Bartenders, in six models ranging from 19′ to 29′, were designed by George Calkins during the 1950s to negotiate the river bars along the Oregon coast. He died in 2008 at the age of 97. Bill Childs owned the rights to the designs, so we went to visit him in Bellingham, Washington.  Bill was kind enough to spend some time with us, answer all of our questions, and show us his cuddy-cabin 22.5-footer and some of the boats under construction in his shop. The Bartenders were even more beautiful up close, and I ended up buying a set of plans for the 19-footer. Plans are available for Bartenders up to 29′, but for me, the best boat is the smallest one that will do the job.

I started building my Bartender in 2005 and it took approximately two years of evenings and weekends to complete. The 19-footer just barely fit in my enclosed one-car garage when it was positioned diagonally. At the time, Bill sold frame kits, and this was a great way to get started. The frames, constructed of 3/4″ meranti plywood, fit together quickly and accurately on the jig.

The only fiberglass called for in the plans was on the bottom for stiffening and to provide a more abrasion-resistant surface for beaching. Standard 8′ plywood sheets were used for the bottom and side panels, and were butt-joined using an overlapping reinforcing piece of plywood, located between frames. The hull was sheathed in 3/8″ meranti attached with epoxy and silicon-bronze screws above the waterline and stainless-steel screws below. Bill strongly emphasized that the Bartender should be lightly built, very close to the plans with few or no modifications, especially those that would increase the weight of the boat or affect the hull shape or balance.

The plywood was coated in epoxy resin below the cockpit sole, and painted with a two-part industrial epoxy paint. This paint was also used on the sole and as a primer on the outside of the boat. The hull was finished off with Pettit EZ-poxy marine paint above the waterline and antifouling paint below. The finish has stood up very well, and has been refinished twice over the ten years the boat has been in the water.

Two very important features of the design are the planing wings and the motorwell with its plug. The Bartender is a planing-hull boat, and the 19-footer needs the surface area of these essential components in order to plane and handle properly. The motorwell plug is critical to the performance of the boat and must be made to fill as much of the area as possible in the motorwell. The plug is a plywood box-like fixture that has an angled forward face to reduce drag and push water down. It hinges down as the motor is lowered, and then locks in place. Lifting the plug and motor is a two-step process where the motor is lifted partway up, the plug is raised, and then the motor is lifted the rest of the way up. The extra step is unusual, but it allows the plug to be built with as much surface area as possible.

Modern four-stroke outboard motors are much larger than the early two-strokes that were prevalent when the Bartender was first designed, and may require that the top of the well be flared outward to accommodate the power head and to allow the motor to turn. This modification to the well is not part of the plans, and its shape will depend on the motor to be used. The newer outboards—especially the four-strokes—are also much heavier, so choosing as small an engine as possible is a good idea. We decided on a four-stroke, 40-hp Mercury outboard. This motor uses the same size block as the 30-hp version and weighs approximately the same; it’s much lighter than the 50-hp, which is the next size up. With the 40-hp outboard the Bartender has a top speed of 25 knots and outstanding fuel economy.

The boat was going to be in the water year-round, so it needed to have a self-bailing cockpit. The cockpit sole is elevated above the waterline, and scuppers drain water out through the motorwell. I also installed an electric bilge pump in the sealed compartment beneath the sole to remove water that seeps through seams and access hatches, but I have rarely needed to use it. The plans include details for positive flotation, which consists of blocks of foam glued underneath the fore, aft, and side decks. I also built sealed compartments in the bow and stern to help keep the boat afloat if it ever flooded.

One aspect of the design that we did modify somewhat was the dashboard/windscreen area. We wanted a bit more protection from the elements. Bill had advised me not to increase the cockpit height too much to avoid problems with windage and weight balance, so we built a 10″-high step on top of the foredeck and attached the wind screen on top. There is plenty of sitting headroom under the dodger and very good protection from spray and rain. We had the dodger sewn up with a zippered panel above the driver’s seat. My usual driving position is sitting on top of the seat back with my head poking out above the top of the wind screen. This is a comfortable position for me and provides very good visibility.

The seats, which are my own design, are simple plywood boxes with fold-down seats on the rear-facing side that provide access to storage in the backrests. The portable fuel tanks are located under the seats, and the battery is just forward of the motor below the cockpit sole, keeping the weight of those items low and near the middle of the boat.

The boat comes up to plane very easily with the 40-hp motor, thanks to the planing wings. There is no noticeable change from displacement to planing, just a gradual transition as the bow drops a bit and the speed increases. The hull performs very well in both smooth and rough seas. The double-ended stern handles a following sea nicely, easily surfing down the wave faces, and doesn’t get pushed around by waves as transom stern would. Having the motor located close to the center of the boat gives it sharp handling. It likes to carve a turn and tracks very well. The only downside of the motor location comes when we’re towing anything from the stern cleat—it is difficult to turn. This problem would be easily solved with a towing post closer to the motor but has not prevented us from pulling the occasional water skier. The 40-hp outboard is just enough to get a slalom skier out of the water.

The Bartender has a generous dory-hull flare, and the beam at the waterline is just 58″. The narrow waterline beam makes the hull quite tender during boarding and very sensitive to weight shifts while under way. Moving around in the boat definitely makes the boat harder to handle, but if passengers stay seated the boat is a lot of fun to drive.

The hull’s flare provides very good secondary stability and handles waves and rough water very well. The only issue I have had is when crossing waves at a shallow angle. If the waves are almost parallel to the boat, the stern can sometimes break loose, causing the boat to spin out. This is easily avoided by approaching waves closer to head-on. The hull has a lot of freeboard, and the combination of flare and spray rails keeps the spray out of the boat.

We have been using our Bartender at least once a month for the last 10 years with very little maintenance and have been very happy with it. It does everything we want it to do and more. There is plenty of space for two adults, two kids, our dog, and all of our supplies. We have used the boat for fishing, water-skiing, and hauling way too much stuff to and from our summer cabin. The plans were very detailed, providing a materials list and all the information required. The building process was straightforward, and the Bartender forum group was a great resource.

The Bartender is a high-performance design that is fun to drive, safe to ride in, and sweet to look at. Ours gets a lot of attention at the dock, and I am surprised how many people recognize it and ask, “Hey, is that a Bartender?” It’s a great feeling to answer, “Yes, and we built it ourselves.”

Don Froese is an electrical engineer living in North Vancouver, B.C. He has built several small kayaks and rowing boats in addition to his 19′ Bartender. 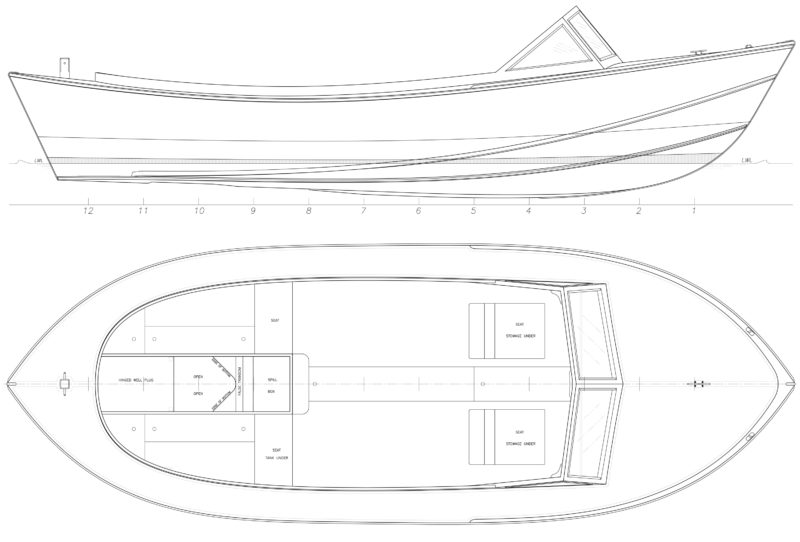 Plans for the 19′ Bartender are available from Bartender Boats for $225. Plans with patterns sell for $325.

The Vermont Dory was first developed by AGB in 2004 to build upon the abilities of the original guideboats that had been in use in the Northeast since the 1800s.…

Alasdair Grant, had built STEADFAST, a 16′5″ version of a 15′3″ Beer Beach boat called WILD DUCK. Beer is a village located in the middle of the Lyme Bay coast,…