The faerings of western Scandinavia were the everyday workhorses that coastal people used for commuting, fishing, and carrying light cargo. Built by tradition and eye, the clinker-built double-enders were formed from three to four wide strakes supported by just a few frames. The narrow hulls rowed well, and the ample reserve buoyancy given by full and round midsections provided capacity for cargo and stability for sailing. The gracefully upswept bow and stern were necessary features along the rough seas of the North Atlantic coast.

When Australian-born, Scotland-based boat designer Iain Oughtred was commissioned to design a small faering based on a small scale model, he studied the type and designed a faering of his own. The end result was his Elf, a mini faering just 15′ long and designed for glued-lap plywood construction, with the most functional and yet simple of hull forms, a tribute to the hundreds of years of evolution of the traditional craft. Later came the stretched Elfyn. At 16′ 6″, it is more like the original faerings, long and lean.

Last summer, my apprentice Kalle Pajusalo and I built an Elfyn. Having previously built an Elf, I found the building process straightforward and rewarding. The seven sheets of detailed plans include full-sized patterns for the molds in lieu of offsets—so there is no need to loft the hull—as well as for the stems, frames, rudder, and daggerboard. With the plans Iain provides some basic instructions on tools and build process and a full list of materials. The hull has only three wide strakes, which are supported by two laminated main frames and two smaller half-lapped fir frames, called rangs, set at an angle in the bow and the stern. The plans give three options for the planking plywood: 6mm mahogany, 7mm larch, or 9mm okoume. Lighter hardwoods—elm, Robinia (locust), or pitch pine—are recommended for the keel, stems, and frames. We chose to use okoume plywood for the planks and tight-grained Douglas-fir for the laminated frames and keel and local yellow pine for thwarts and, for the floorboards, pine cross-laminated timber (CLT), a material like plywood but with much thicker laminates.

Once the inner stems have been laminated, they are installed over the molds and glued to the keel. We chose to laminate the two main frames in place, clamped to blocks bolted to the molds. All but the garboard planks for an Elfyn need two scarfs to get the length required. We used narrow strips of fir screwed together to transfer forms from the hull on the plywood boards. The sides of the molds can be used as a guideline when beveling the planks. Once the planking begins, with just three wide strakes, the hull takes shape swiftly. The plank lands are beveled to accept the next strake, using the molds as guides to the amount of bevel required. The plans don’t mention fiberglass sheathing for the planking, and glued-lapstrake plywood construction generally creates a stiff-enough hull. When building an Elf for himself, Iain chose to use larch plywood imported from Germany and treated the finished hull with oil only. If you wish for a more maintenance-free surface, two or three coats of clear epoxy will protect the wood from the elements. After the epoxy coating, we covered the exterior with two layers of epoxy primer, followed by a two-part polyurethane paint for a relatively hard and abrasion-resistant surface. The epoxy-coated interior was sanded smooth and given three coats of Sikkens Cetol clear wood stain, which I have found to work well and to give proper and easily maintained protection against sunlight.

It was only after turning the hull over that we truly realized we were building a boat significantly bigger than an Elf. The difference in length is only 1-1/2′ between an Elf and an Elfyn, but the beam and depth are also greater, more than enough to give the two boats different characteristics. Elf is small and handy, while Elfyn is a more substantial boat on shore and on the water. I think Elf is best suited for sailing or rowing solo or occasionally with a friend, while Elfyn is better for two, or occasionally three people. As Iain himself puts it, Elf is less of a handful.

Elfyn can be rigged with a sprit sail or balanced lug. We chose to use a 62-sq-ft lug sail. With the sprit rig, the plans call for a separate mast partner attached to the gunwales while with the balanced lug the partner is integrated in the forward thwart. There’s no mention of shrouds, but as the mast bury is quite small, 12″ for an 11′ mast, we decided to use a rope shroud on one side and the halyard on the other. The plans include an option for buoyancy compartments, enclosed under low decks in the bow and stern.

The leading edge of the rudder follows the curve of the stern and extends somewhat under the hull. The plans provide one option for traditional pintles and gudgeons and another for a long curved rod that the rudder fittings slide on, up for rowing—with the blade above the water—or down for sailing. We have used the traditional approach, but when installing the rudder gear, one should be careful not to have too much of the rudder surface in front of the turning axis, as this will make the rudder too balanced and provide limited feel. After sailing Elfyn the first time, I had to cut a small piece from the forward end of the rudder to make it less prone to turning by itself. The Norwegian push-pull tiller goes well with the character of these boats, and you also benefit from the possibility to steer even from the middle thwart, using the 5′ tiller.

On the water, Elfyn feels tender while boarding or moving about but is steady when you sit down for rowing or sailing. For sailing, sitting on the floorboards between the thwarts lowers the center of gravity, and then the boat is forgiving, heeling calmly once the wind picks up. The floorboards in the middle of the boat would be a sweet spot for the passenger, too, but the space is taken by the daggerboard case, which is installed a bit off center alongside the keel. Sitting in the forward thwart, the passenger has to duck under the boom during tacks and move swiftly to the windward side.

Elfyn sails very well without the daggerboard, even tacking into the wind. When returning to our launch ramp against a light headwind, I raised the daggerboard and Elfyn kept on going steady, with only a slight increase in leeway, and we had no trouble tacking upwind the last quarter of a mile. The faering’s moderate V-shaped hull and full-length, 2″-deep keel give it outstanding ability to sail even upwind.

Rowing an Elfyn singlehanded, you feel the bigger and heavier hull compared to an Elf, but still it is easy to get it up to speed and maintain 3 to 3.5 knots. The keel gives it excellent tracking and there is very little leeway while rowing with the wind on the beam. Turning will take some time and space, and you might need to back with the other oar in tighter spots. While an Elf could easily feel overpowered by two rowers, Elfyn benefits more from the help of a second rower. With both boats, pay attention to proper longitudinal trim; if the stern or bow is overloaded, you will immediately feel the extra drag.

Faerings have a good reputation for taking care of themselves when the going gets rough, borne out by Iain’s experiences rowing through surf and mine sailing an Elf in challenging conditions. In very strong winds, the extreme lightness and upsweeping bow and stern of Elfyn will have an effect on the boat and make rowing hard and unpleasant work. Some water-bag ballast or a load of cargo for cruising should help. The lightness has one drawback when sailing, too: sailing upwind in waves, the lack of momentum is bound to get you caught in irons if a wave hits the light hull during a tack. Downwind, lightness is a desirable feature and Elfyn will surf down the waves, occasionally exceeding hull speed.

Using inflatable beach rollers, it is fairly easy to get Elfyn rolled out of the water on a beach. For camp-cruising, hauling the boat ashore is a very practical feature; you do not have to worry about wind shifts or changing wave conditions. When sailing, the rollers are tied under the thwarts and serve as emergency buoyancy.

Iain’s faerings are easy to handle while launching and transporting and graceful, excellent performers under oar and sail. If you decide to build an Elfyn, you are in for some remarkable times on the water in a boat loaded with character.

Mats Vuorenjuuri is the father of three and an entrepreneur, making a living in graphic design, photography, and freelance writing. He is currently becoming a boatbuilder as well, offering boatbuilding and maintenance services through Nordic Craft. In recent years he has discovered the simplicity and joy of small boats after sailing various types including sail-training schooners. He wrote about cruising the Finnish coast in his Coquina in our May 2016 issue and about a Lakeland Row in January 2017. 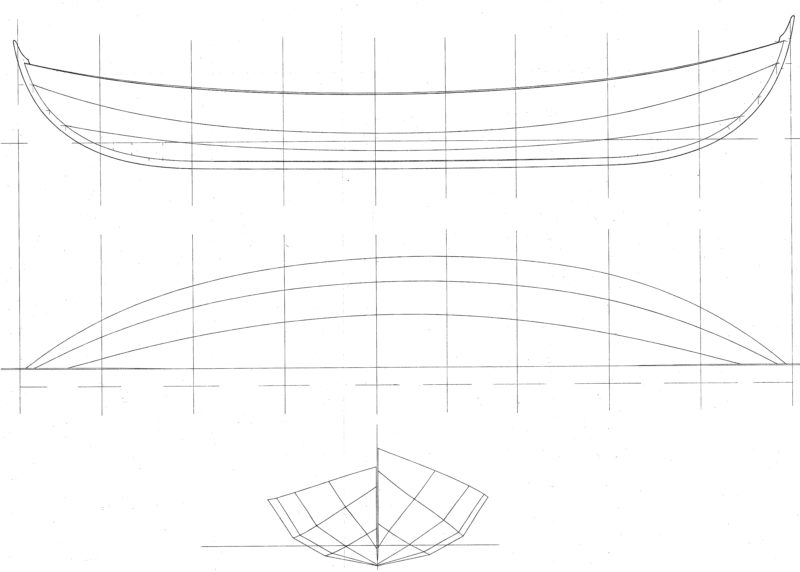 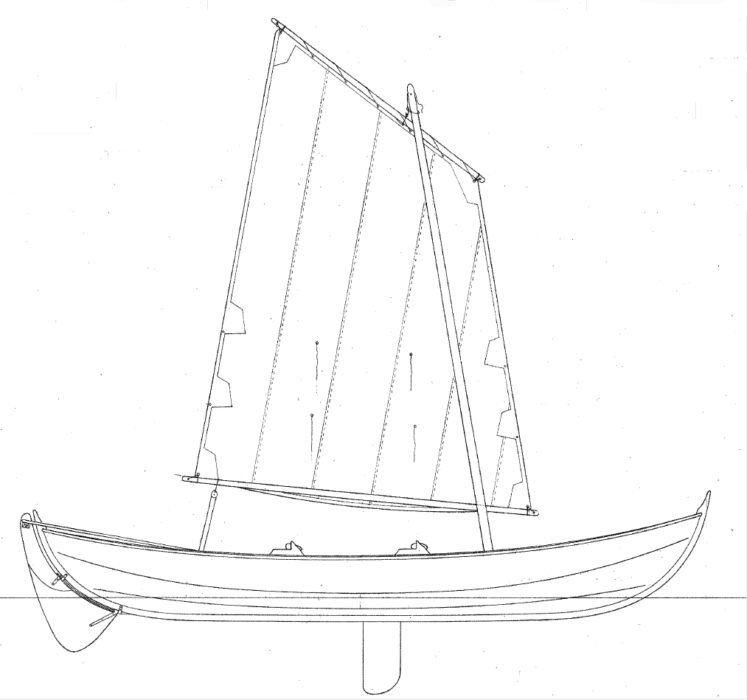 Plans for the Elfyn are available from The WoodenBoat Store for $225 USD and from Oughtred Boats for $244.39 AUS. For kits, see Oughtred Boats.