Was it time for another boat? In the 1980s, it was a 16′ sailing dinghy that awakened my wife Barbara and me to the beach-cruising pleasures of the San Juan Islands in Washington’s Puget Sound. In the ’90s, it was a 19′ lug-rigged double-ender for oar, sail, and outboard that extended cruising to Desolation Sound. Then came a 20′ catamaran, sporting a wing mast with square-topped mainsail, that got us inside a comfortable cabin while offering exciting sailing in moderate conditions. But as years went by, sitting out in the weather and hauling sheets took its toll. Sailing was exciting when the wind was up, but boring in light summer winds. Why bother with sailing if we could motor at 10 knots? Was it time for a gasser?

And so it was, and we decided upon the Eco 5 Power Cat by Bernd Kohler in France. Its narrow hulls, wave-piercing bows, space-age profile, and three-tone color scheme really made it a looker. At 5.5 meters, it was about the same size and accommodation as our 6-meter sailing cat, and still trailerable behind our compact SUV. The twin 5-hp outboards specified in the plans were to drive the EcoCat at an economical 10 knots and spin it around in circles. Having them mounted on the transoms should eliminate weed pickup, as well as the between-hull wave buildup working against a centrally mounted outboard. I ordered plans, and the digital files came quickly via email.

Once I had the design tuned to suit our needs, I nested parts for economical use of plywood sheets, created a tool path for the ShopBot CNC router I’d used for our rowing-shell kit business, and quickly cut out the parts from 6mm plywood. It sounds complicated, but it’s actually similar to laying out parts by hand—but with parts cut far more accurately, with beautiful, fair, and smooth curves everywhere. I milled clear Sitka spruce to dimension, scarfed it to full lengths, rounded edges, and precoated everything with epoxy. This self-made “kit” made for very fast building.

The building jig had only one temporary form; all other forms were bulkheads that remained with the hulls. The hulls were built upside down, planked, and even finish-coated with graphite-infused epoxy—later I’d paint above the waterline. The 6mm planking was patterned on the hull, as the actual faired shape may be a bit different from a CAD plate expansion, then glued in place and trimmed. The hull and side-panel sections were joined with butt blocks that added stiffness in way of the temporary bulkhead. After I flipped the hulls upright and aligned them, I fit the deck—scarfed 12mm plywood. The cabin sides and top were built up with two layers of 4mm ply. It took just four months for me to complete the construction of the hulls and cabin.

The partially finished boat looked great, and I decided to spend the big money for a two-part paint sprayed on by a professional, thinking it would be done quickly. Wrong. It was another six weeks before the boat was back for outfitting. The plans showed a windscreen here, a galley there, a steering wheel, and twin outboards—but no details. It was just another challenge to work through.

Remote steering and motor controls for twin outboards is very routine for a monohull, but not for tiny twin 5-hp outboards on a catamaran! Time to improvise. A tiller bar, supported on nylon bushings, was hidden in the cross beam with a mechanical steering cable connected to the dash-mounted steering wheel. What a challenge it was just to have twin motors on a little catamaran.

Another professional I hired designed an excellent canvas dodger, back panel, and semi-rigid windscreen that really complemented the design. Barbara and I could now cruise, completely protected from wind and rain, sitting in comfortable captain’s chairs. The 6′ x 8′ cockpit is our living room at anchor, doubling the EcoCat’s enclosed space. A Yeti cooler, good for five days, stays in the cockpit as a table or extra seat. An Origo two-burner alcohol stove eliminated complicated propane systems. We use a lightweight 32-amp-hour starting battery, not for the pull-cord-start outboards, but for powering LED lighting and an iPad for music and charts with the Navionics app. We only need the instruments powered up while we’re under way, so the outboards’ 6-amp charging outlets supply power directly to the instruments and charge the battery at the same time. No shore power is needed. Simple systems for a simple boat—its name, JUST ENUF, serves the cat well!

During the boat’s first season we took a two-week cruise to British Columbia’s Broughton Islands. The cruise covered hundreds of miles, and we alternated between being the only boat in a secluded cove and being surrounded by the warm hospitality of wilderness float marinas. A comfortable 80-mile range and top speed of 10 knots allowed us to do plenty of exploring without concern for time or fuel. The EcoCat is comfortable in sea conditions of 2′ short, steep chop and can confidently deal with far rougher conditions.

This 8′-wide catamaran offers the stability and seakeeping of a far larger boat. There’s never a problem grabbing for a hot pan when another boat, zipping by to look at JUST ENUF, leaves its wake for us. There is plenty of room with a hanging locker and two cuddies for each person. Sleeping bags with integrated mattresses make a very comfortable double. When bags are folded over during the day, the large padded bridge deck area is very comfortable for sitting, cooking, and just hanging out. The starboard hull has a cushioned canoe seat atop the porta-potti. Just forward is hull storage for an inflatable kayak or two folding bikes and other bulky gear. The port hull has standing headroom at the sink and sit-down room for meal preparation with a flip-down table for dining.

The twin 5-hp outboards proved to be not enough power. They had no top-speed potential, pull-cord starting, and were noisy, especially with the steering linkage rattling between them. Worse, the tiny props had so little bite that docking maneuvers were a constant challenge. A repower with a single Yamaha 20-hp outboard yielded a 10-knot cruising speed, 15-knot top speed, and the same fuel economy as the twin 5s: 1 gallon per hour at any speed. Electric start, 6-amp charging capability, and a lightweight battery competed the package. A 1′ extension added to the stern of each hull helped offset the additional weight of the larger motor and its under-deck 12-gallon fuel tank. Docking was no longer embarrassing, and we could now talk while running 10 knots. The rougher the water got, the faster and smoother we would go. Life was good.

But as most of the weight was still aft with either engine arrangement, the EcoCat still squatted underway. One day, Mike Snook—experienced with super-large, high-speed Australian catamarans—suggested transom wedges and end plates as the cure. A 1″ x 4″ wedge was added like a trim tab to the each stern with skeg-like end plates added in line with the sides of the hull to contain the flow. The cat’s tracking was better, even with the previous centerline skegs removed. Trim was now level with clean entry and a very smooth exit. After a prop change, we had the same top speed with cruise speed reduced by 400 rpm for a noticeably quieter boat.

Outboards are designed to mount behind a transom with only the prop exposed below the hull. When centrally mounted on a catamaran, all of the lower unit below the bridge deck is exposed to bow wave convergence with lots of unwanted spray and, perhaps, added drag. We had tried several ideas on previous sailing catamaran but solved the problem on the EcoCat with a hull-mounted streamlined fairing that lets the motor think it’s on a transom.

The 10-knot cruise speed for our typical three-day, 50-mile round-trips lets us enjoy island life and not lose one day getting somewhere and another getting back. That’s the advantage of a gasser. It’s all about the destination, hanging out, enjoying a nice hike, being in a special place, especially for my wife Barbara and me. My solo trips continue to range farther and wider in all weather conditions.

Could a gasser be my only boat? I still enjoy sailing in other small boats at a rendezvous or big sailboats with friends. I’m on the water most days, year-round, rowing my wherries or open-water shell. The EcoCat takes me comfortably, in safety, to far-off destinations that I would not choose to get to under oars or sail. I’m going to keep my EcoCat!

Ron Mueller continues to design and build small boats and still rows most days in Bellingham, Washington. He started whitewater kayaking in the late ’60s, sailing in mid ’80s, and rowing in the ’90s when he founded Wayland Marine. Ron designed and built the Merry Wherry kits and was the Northwest dealer for Alden Ocean Shells and Echo Rowing until retiring in 2010. 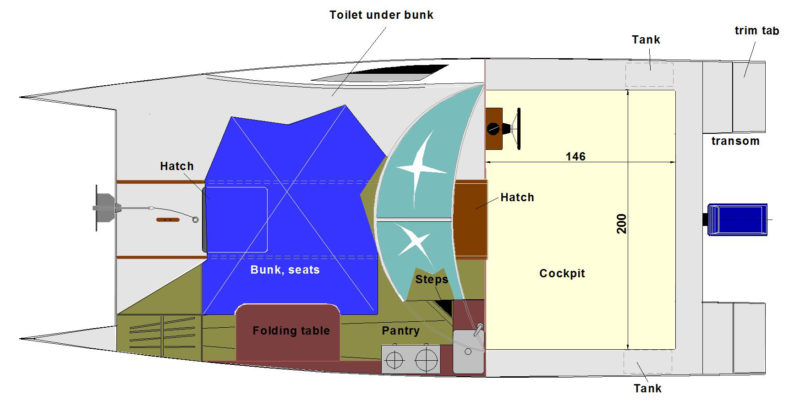 Plans for the EcoCat, with a digital manual and 16 pages of drawings as BMP or DFX files, come from Bernd Kohler at K-designs. A kit is also available.

GoPro as a Trailer-hitch Cam

Harris Bucklin, a Small Boats Monthly subscriber, sent me this note after he had read our review of the iBall back-up camera in the January 2016 issue: “You gave me...

Was it time for another boat? In the 1980s, it was a 16′ sailing dinghy that awakened my wife Barbara and me to the beach-cruising pleasures of the San Juan…

If there’s one thing I’ve learned about the rowing on the Lower Columbia River, it is to go with the flow. Winters there tend to be gray, windy, cold, and…

To row with power you need to have your feet firmly braced against something solid enough to take your full weight. In some traditional boats you can get by with…

Forward-facing rowing systems are nothing new. You’ll find many old patents for devices that use gears or pivots and connecting rods to get rowers to see where they’re going. The…

The older I get, the more safety conscious I become. Every year I add to the emergency kit I bring on my small-boat adventures, but as yet I’ve never carried…