During a weekend in northern Michigan during the summer of 2009, I got a chance to take a spin in a couple of wooden boats that my daughter’s boyfriend had built with his dad and his brother. The thrill of coming up on plane and hitting a few waves in an 11′ boat with a 15-hp outboard put a smile on my face that persisted well beyond setting foot on land again. I had not operated a powerboat in many years, and way back then it was an aluminum fishing boat and 9.9-hp tiller-controlled outboard—not as exciting as operating a boat with a steering wheel and a remote throttle handle.

I came back home from that weekend with the plans for the boats they had built, and decided I would build a small boat to utilize that 9.9-hp outboard I had inherited. I talked with my co-worker Ted Gauthier about my plan, and he was on board too for building a boat too. His research took us to the Glen-L website and the wealth of plans they have available. Ted decided to build a runabout, the 14′ Zip. I wanted a smaller boat that I could build in my basement and get out without removing the living room floor. The Squirt model fit that requirement, and by using the plans’ option to stretch the length from 10′ to 11′, it fit my needs perfectly. I loved the look of the design with the pronounced tumblehome at the transom giving the sheerline a beautiful curve. The boat had a seat, steering wheel, and good lines, and Glen-L has a good builder-support system, so it was the choice for me.

If you’d like to get off to a running start, you can buy a frame kit and have the parts for the transom, the two frames, gussets, stem, breasthook, and knees. I started from scratch with just the plans and full-sized patterns. I made a strongback elevated off the floor to provide a comfortable working height and on it mounted the transom, frames, and stem. The stretch variation was fairly straightforward—the spaces between the ends and frames all get increased by 10 percent—and once they were aligned they were connected by the keelson, chines, and sheer clamps. The hull and deck are constructed with 1/4″ marine plywood. The stretched version seemed to be a good investment because it provided more hull displacement and used material that might have just become scrap with the standard 10′ version.

The completed hull and deck get sheathed with fiberglass cloth and epoxy. This was recommended for the abrasion resistance that it provides and, having hit tree stumps and other water hazards on occasion, I think it is good insurance against getting a hard scrape that might gouge into the plywood bottom. I painted the hull before turning the boat upright and created a pattern that covered screw-head filler along the chines. The 1/4″ marine plywood planking is not thick enough for bungs to cover the screw heads, and the fillers I used were not always a good match for the color of the wood.

As I was building the boat, I came to the conclusion that the 9.9-hp outboard I had on hand would not be of sufficient horsepower to provide the oomph I wanted. And my search for remote control hook-up for it was not successful. I liked the look of the 1950s Johnson and Mercury outboards, and my research showed their power-to-weight ratio would suit my boat well. After joining the Antique Outboard Motor Club (AMOCI), I got some advice that the 1956 Mercury Mark 25 was a good motor and was compatible with today’s fuel-system connecters. I followed a lead on one and took the plunge. A little tune-up and checking-over with a fellow antique-outboard enthusiast, and I was on my way. I still had a lot to learn about setting up and maintaining an older outboard, but I had the support of several people in the Great Lakes Chapter of the AOMCI when I had questions and when I needed encouragement.

Instead of ’glassing the 1/4″ marine plywood deck as called for in the plans, I added African mahogany planking on top for stiffness and looks. The resawn wood ended up at about 5/16″ thick and added a bit of weight, but the look can’t be beat and I have no indication that the weight compromised performance. The paint on the hull that hid the filler over screw heads also concealed some fiberglass reinforcement tape at joint lines that came out more translucent than transparent. The paint scheme evolved further to hide some sins along the sheerline, butt joints on the side panels, and joints between the transom and sides. While I covered some unblemished plywood in order for the paint scheme to make the boat look fast even when it was standing still, I was still able to preserve much of the natural okoume plywood along the sides for being finished bright. My daughter, taking her cue from the paint scheme, designed the seat cushions and gave them a retro look to go along with the 1956 Mercury outboard. I still picture a 1956 Chevy Bel Air in blue and white when I look at my boat.

The cockpit, with the exception of the seat cushions, is minimalist by choice. Adjacent to the seat  there was a space between the cushion and hull that was the perfect place for a couple of large holes in the seat framing for holding drinks. I added floor battens in the area ahead of the seat where we step aboard; they fill in the gaps between the structural battens and create the appearance of floorboards. The result looks clean, and intentional rather than incidental.

The performance of the Squirt has exceeded my expectations. The Mercury, rated at 20 hp, gets the Squirt up on plane in 3 to 4 seconds with just me aboard, and my GPS-measured top speed is about 28 mph. I experimented with different propellers, and a three-bladed prop gave the best overall performance with getting on plane faster with a passenger and little change in top speed. I’ve had passengers weighing up to about 250 lbs aboard, and while it may take 25 seconds to get on plane, the top speed may only come down to about 24 mph. The Squirt never ceases to provide a thrilling ride. The extra weight of a passenger doesn’t significantly affect performance, so the stretch version was the right decision for me.

The boat’s handling is superb. I followed the plans for the center skeg, and it provides the turning ability that will allow the boat to corner at full speed as tightly as you are comfortable with. I think the best comment I received was from a friend who came back from his ride with a huge smile on his face. When asked about why he was smiling, he said something to the effect of “I knew your boat looked good, but I had no idea that it could perform like that—it’s amazing.”

I often ask passengers if they mind getting a little spray in their faces. If they’re game, I’ll make a fast circle across the wake and the spray will come up over the bow. I take screams as a good indication that they are getting a thrilling ride. The Squirt can handle 6″ to 8″ chop, but rougher water often requires coming off plane and slowing down the pace.

The boat trailers with ease. It is light enough that if I see that the boat has come out of the water crooked on the trailer, I can pick up the stern and slide the boat over. My trailer is set up so the boat’s bow eye snugs under the winch roller and two ratchet straps hook to eye-bolts cinch it down to the trailer. I had a custom cover made to protect the boat and motor when trailering. When I’m on the road, I hardly notice the boat and trailer from the driver’s seat, and I occasionally look back to reassure myself that they’re still there.

As with many wooden boats, a good deal of the pleasure of owning them is in the reaction people have to it. My Squirt starts many a conversation about wood boats, older outboards, and fun on the water, and may have inspired others to get on with their dreams of building a boat. The handling of the boat is fantastic, the performance is a thrill, and the runabout design keeps you from putting more people aboard than the boat can handle. The Squirt is designed for the beginning boat builder and with economical use of material in mind. On the water it is best with people of average height and weight and taking kids for rides. It could also be perfect for a younger power boater learning to handle a boat.

Art Atkinson retired from Ford Motor Company after 31 years as an engineering supervisor at Body Engineering. He is currently the manager for Bloomfield Village Association in Michigan. Woodworking has been his hobby since high school and prior to building boats he made musical instruments, furniture, and kitchen cabinets. 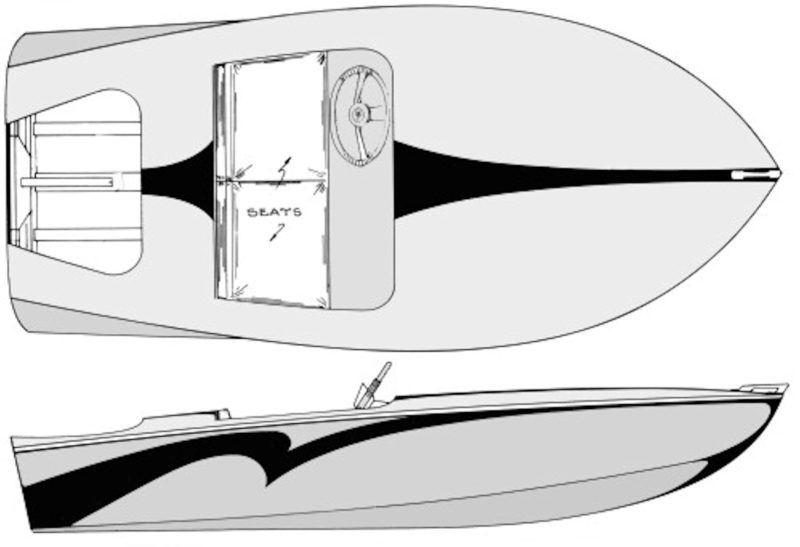 Plans and kits for the Squirt are available from Glen-L.

I needed to pull the centerboard out of my Whitehall and make it a bit thinner so it would operate more smoothly. I wasn’t looking forward to dragging the boat off...

During a weekend in northern Michigan during the summer of 2009, I got a chance to take a spin in a couple of wooden boats that my daughter’s boyfriend had…

In November 2013 I received a phone call from Tommy Hudson, good friend as well as one of my employees. After we chatted for a bit, he said he loved…

Poling is the age-old technique for propelling a canoe against rapids or up shallow streams where paddling is ineffective. Standing in the canoe, the paddler uses a straight pole, often…

When you’re pulling up an anchor or a crab pot, you’ll get a better purchase on the line if you get up next to the rail, but putting your weight…

Blisters are a rower’s nemesis, and any way to prevent them or reduce their severity and frequency would be welcomed. Lots of rowers try gloves, but seams and creases in…

During a weekend in northern Michigan during the summer of 2009, I got a chance to take a spin in a couple of wooden boats that my daughter’s boyfriend had…