Several years ago, I was standing on the banks of the River Thames watching a boat sailing by at the annual Beale Park Boat Show. It was a small, double-ended dinghy obviously inspired by Scottish workboats but built of modern materials. As a longtime enthusiast of Iain Oughtred’s double-enders, I was mesmerized by this little boat that seemed to encapsulate the essence of a salty workboat, pared down and reduced to its bare elements. The Storm 15, first offered as a wooden kit and then reproduced in several sizes in fiberglass by Swallow Boats in Wales, was almost brutal in its simplicity and showed how traditional designs can be successfully reinterpreted in a modern style.

Ten years later, standing on the deck of a camera boat on the south coast of Devon, I was similarly struck by the latest offering from Swallow Yachts, as they’re now called. There was that strong sheer, plumb stem, and dramatically raked sternpost, combined this time with a fully battened, square-headed Bermudan mainsail. Tacking off the timeless, craggy coast of Devon, the Storm 23 looked decidedly unconventional, even kooky, and yet there was something about her that inspired confidence: a purposeful air, a look of intent, almost of defiance. And, while there was no one else on the water that late autumn day, there’s no doubt that in any fleet of boats, the Storm 23 would stand out by a mile. She’s nothing if not striking.

It came as no surprise that Christian Fortmann, the owner of the first Storm 23, has sailed a Storm 17 for the past 10 years. His main use for the boat is sailing on the lakes close to his home in Munich, Germany, but once a year he takes it on the family holiday to the village of Newton Ferrers, Devon, in the southwest corner of the U.K. Idyllically positioned at the mouth of the River Yealm, the harbor at Newton Ferrers opens straight onto a rocky and unforgiving stretch of coast. It’s a great cruising ground, with Salcombe and other pretty villages to the east and the River Tamar and the whole of Cornwall to the west, but get it wrong and you can soon be in serious trouble—as many an unfortunate ship has discovered in the past. With his family growing up and his sailing ambitions growing too, Christian asked Swallow Yachts to built him another boat. His brief was simple: “Like the Storm 17, but bigger.”

There were other criteria that dictated the eventual shape of the design. The boat had to be trailerable, so it could be easily transported to the lakes and to the U.K., which immediately raised the issue of ballasting. And Christian wanted to be able to sail with his whole family, necessitating a fair-sized cockpit, or on his own, meaning the rig had to be reasonably easy to handle. These were just some of the issues the boat’s designer and builder, Matt Newland, had to juggle with in creating a boat “like the Storm 17, but bigger.”

Matt applied a modern solution to the problem of ballasting: water ballast. The Storm 23 is fitted with ballast tanks capable of taking 500kg of water, thereby doubling its displacement. Combined with 215 sq ft (20m2) 0f sail, this gives her, according to Matt, a sail area to displacement ratio of 16.9 with her tanks full, similar to a medium-displacement cruiser, and 23.3 with her tanks empty, closer to a racing boat. It’s a neat solution which should make the boat easy to trail and exceptionally fast in light winds, but which has certain ergonomic consequences, as we shall see later.

In keeping with all their made-to-order wooden boat designs, Swallow built the Storm 23 in epoxied plywood, using mostly 9mm ply. The trim is made of utile, a West African hardwood with an interesting interlocking grain.

Stepping on board the Storm 23, the first impression is of a thoroughly modern, well-thought-through design. The deck, cockpit, and cuddy are all made of clean white panels, and could just as well have been made of fiberglass as plywood (and no doubt this is done with an eye to eventual production in ’glass). What brightwork there is, is mainly decorative trim, with the exception of the tiller.

With the bilges filled by ballast and buoyancy tanks, the cockpit floor of the Storm 23 is set quite high—so much so that the centerboard case is almost entirely buried under it, with only the topmost edge protruding above. It takes a bit of getting used to, but the overall effect is to increase cockpit space and maximize legroom. It also allows unhindered access to the small cuddy forward. The cuddy itself is 6 1/2′ (2m long), but with minimal headroom, it provides only a very basic sleeping area. Most of the time, it’s likely to be used as a large and very convenient storage area.

There are some neat tricks, such as the telescoping swim ladder concealed behind a hatch in the topsides. It can be accessed in seconds. Under the aft deck, there’s just enough space for an outboard well—in this case housing a Torqeedo electric outboard. The rudder is set on a long pintle so it can be raised with minimal effort in shallow water or for launching and recovery on the trailer.

The rig itself is unabashedly modern, with carbon-fiber spars and matching black hardware for the running rigging. There are nods to the boat’s traditional heritage, such as the leathering around the mast and a wooden locking bar where the mast passes through the foredeck, but these are the exceptions. It’s all very clean and uncluttered, with even the roller-reefing mechanism tucked out of sight under the foredeck. Matt has done away with crosstrees on the mast to reduce windage and simplify the rigging process, while the square-headed mainsail makes for a shorter mast, which means less overhang on the trailer.

It was late afternoon by the time we made it out of the harbor entrance, and the last of a 10-knot breeze was pushing up a chop which bounced uncomfortably off the cliffs. The boat’s ballast tanks were empty for the photos, and she seemed slightly tender to start with. With her hard-chined bottom, she has a tendency to slam when sailing empty, but this was quickly rectified by adding some ballast. And it was easily done. Christian simply opened a watertight hatch on the cockpit floor, reached inside, and opened a forward facing, gateless self-bailer to let the water in. Once the tank was full, he reached inside again and closed the bailer. To someone hard-wired to keep the water out of a boat at all times, it was quite disconcerting to watch the sea flooding in, but Christian assured me there was so much buoyancy, the tank would stop filling long before the boat sank. The tank is also equipped with standard rear-facing bailer for emptying, although a hefty bilge pump takes the ballast water out faster when the boat speed is low and you want to lighten up because the wind has died down.

With the boat’s displacement effectively doubled, the boat settled into a groove and gave a much more comfortable ride. The Storm 23 has a relatively small rudder, but her double-ended shape means the water flows steadily past it, giving excellent steerage at any angle of heel. Even with her long, straight keel line, she’s easy to maneuver and doesn’t get stuck in her stays. And she’s certainly nimble. We didn’t have a log on board when I sailed her, so I couldn’t measure her exact speed, but she accelerated well out of every tack and skimmed across the chop with gusto, thanks to her slender, easily driven hull.

With her efficient rig, lightweight construction and 5′ 4″ (1.6m) deep centerboard, the Storm 23 performs more like a modern dinghy than the Scottish workboats she was originally inspired by. According to the sales literature, this combination “gives her blistering upwind performance and if well set up she will point as high as anything else afloat.” There were no other boats on the water that day to test that claim, but certainly the boat pointed well enough to take us quickly off a worrying lee shore and safely into deep water.

As the sun lowered, the cliffs and hillsides were bathed in a golden light that looked as if it had come straight out of a tourist brochure. The Great Mew Stone, a distinctive double-wedge shaped island, was silhouetted on the horizon with Rame Head in the distance. I could see why Christian wanted a bigger boat to explore this enticing but dangerous coast, with its idyllic hidden beaches protected by lines of jagged rocks. He could pull the Storm 23 up on a beach—it draws only 9.8″ (0.25m) with the board up—and enjoy a picnic with the kids, and then push off and sail home in comfort and safety when the prevailing southwesterly starts to build.

With the Storm 23, Swallow Yachts have achieved that and created a stylish and distinctive little boat that will provide a lot of fun for Christian and his family and other families just like them.

Nic Compton is a freelance writer/photographer who grew up sailing dinghies in Greece. He has written about boats and the sea for more than 20 years and has published 12 nautical books, including a biography of the designer Iain Oughtred. He currently lives on the River Dart in Devon, U.K., and sails two boats designed by Nigel Irens. 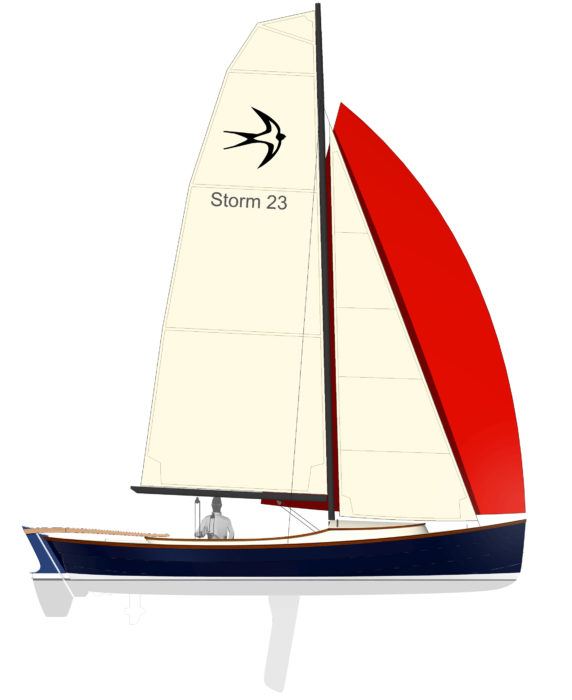 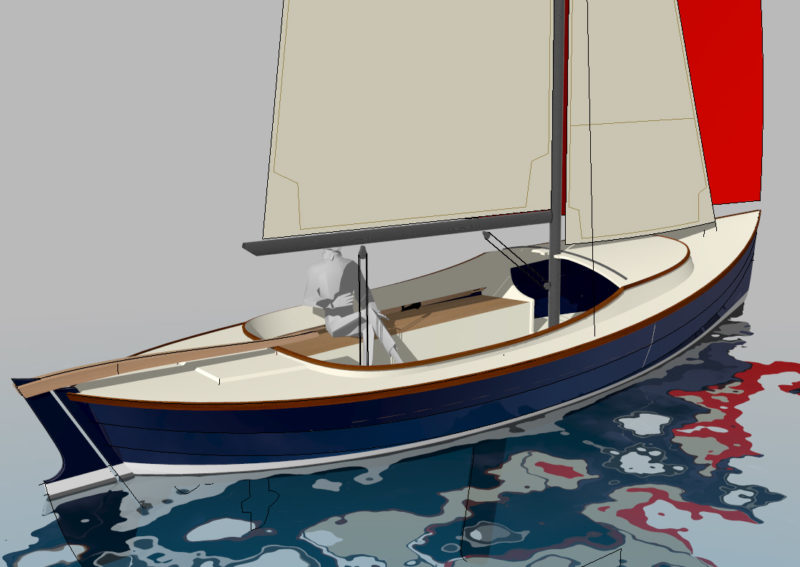 The Storm 23 is being built to order by Swallow Yachts in the UK.