It’s unfortunate that “Jack of all trades” is so often followed by “master of none.” It is possible to do a number of things quite well, and versatility is often of more value than virtuosity. The new Southwester Dory from Chesapeake Light Craft (CLC) was designed to serve not only as a sailboat and a rowboat, but also as a motor launch, and it does well in all three capacities. Its predecessor is CLC’s Northeaster Dory, a boat that proved popular among the sail-and-oar crowd, but many prospective buyers asked about adding outboard power. Designer John Harris wisely left his Northeaster as it was and drew up a slightly larger boat that could accommodate a small motor.

The narrow, raked transom isn’t meant to support an outboard, and the slender sections aft won’t support the weight of someone at the motor’s tiller, so John situated the Southwester’s motorwell just aft of amidships. The centralized well, an optional module that can be installed at any time during or after construction of the boat, allows comfortable seating and makes it easy to get to the motor’s fuel cock, steering friction screw, tilt lock, and fuel-tank cap without having to hang overboard. It brings the motor’s noise into the middle of the boat, but in a small boat, there’s no escaping it anyway.

The well is long enough to allow the motor to kick up when it hits something or isn’t in use—a real advantage over a short well that requires removing the motor and stowing it elsewhere  to transition to rowing or sailing, coming ashore, or coasting over shoals. While leaving the motor lowered creates a lot of drag, so does the motor well opening. So the Southwester has two inserts to fill the open slot, one notched to fit around the motor when it is in use, and the other to fill the entire slot. Toggles hold the plywood inserts in place.

The rudder has a kick-up blade. A knob on the pivot bolt is backed off to drop the blade and tightened to keep it in place, up or down. Applying a moderate amount of pressure to the knob will keep the blade down and still let it swing up over an obstruction. The rudder stock is 1” higher than the skeg, and the jog will help keep lines or kelp from slipping in between the transom and the rudder. If you’re rigging the boat for sailing, keep in mind that it’s easier to tend to the rudder blade when the mizzen isn’t stepped, but even if you have to snake around the mast to get to the rudder, there’s still enough stability to keep the boat upright.

The Southwester’s Norwegian-style push-pull tiller has a half yoke extending to starboard and a pivoting extension to reach around the mizzen mast to the center of the cockpit. The transverse arm is permanently fixed to the rudder head, making the assembly an awkward thing to stow. Instead of gluing the two pieces together, I’d add a few extra layers of plywood to beef up the slot in the tiller for a secure slip-fit over the rudderhead. Having the rudder in place while rowing can work well when there’s a second person aboard to take the helm, but for rowing solo, even with a pivoting rudder blade retracted, there’s enough of the rudder in the water to cause drag, slow steering, and flop over while backing. I prefer to have it unshipped. Removing the rudder will also allow you to use the notch in the transom for sculling. The notch is deep and partially enclosed, making it also well suited for using an oar as a backup rudder.

At 18′10″ x 5′2″, the Southwester dory is a lot of boat to row solo, but the stitch-and-glue construction keeps the weight down; the boat has a light and lively feel under oars and carries its way well. The 8′6″ oars I used worked well enough but were a bit on the short side; the common formula for oar length suggests 9′10″ oars would be the best fit. A foot brace could easily be attached to the motor well for rowing solo very powerfully. While the insert in the motor well eliminates drag, it’s not gasketed, so there are always a few inches of water in the well. I wasn’t even aware of it while motoring or sailing, but as I was rowing, the rhythmic surge set the water to sloshing about, and if I rowed with gusto a bit would splash into the cockpit. The water does no harm, but the meditative aspect of rowing is incompatible with all the commotion in the well. A watertight insert with a self bailer or pumping out might solve the problem. Another fix is to have something to fill the space—say, foam blocks or a custom-built insert (the one I have for the well in one of my boats has a Plexiglas window for a view below).

Balance-lug rig is used on both the main and the mizzen masts. The spars are all rectangular in section, but their tapers keep them from looking clunky. The main’s downhaul takes a turn around the mast to serve as a parrel line. It holds the boom in its proper position while sailing; when striking the main, casting off the downhaul allows the boom to slide forward, as it must as the yard rotates to horizontal and pushes the sail forward. It’s a simple and effective arrangement for a lug sail.

The mizzen has a loop of line made off at the forward end of the boom and looping around the mast. It slides up and down as the sail is raised and lowered. The tail end of the mizzen sheet is tied to a bridle across the stern and its working end leads forward along the boom through a cam cleat on the mast.

The centerboard is lowered and held in place by a downhaul, which I prefer to a weighted board, which can’t be forced down if jammed and adds to the burden of moving the boat across a beach. The downhaul is held by a jam cleat and won’t release if the board runs into something, so a releasing cleat (by ClamCleat in the U.K.; click “Purchase Options” to find distributors worldwide) is worth having if you’re in an area of rocks or shoals—or if you’re like me and occasionally forget to raise the board before haulout.

In wind around 8 knots and waves under 1′, the Southwester’s 107 sq ft of sail had me scooting along at a satisfying pace—I’d be content to sail like that for hours. When the wind picked up to around 12 knots the sailing was more exhilarating, but not approaching the need to reef. The dory tacked quickly, carrying enough momentum to not get caught in irons. With the long Norwegian push-pull tiller I could sit where my weight belonged—amidships—and the wide side benches were comfortable, with room enough to move laterally to respond to gusts and lulls. With the sails largely self tending and only two sheets to fuss with, singlehanding is easy.

The 2.3-hp outboard motor available for my test outing wasn’t the one meant for the plug in the motor well, so I had to go with the well open. The motor supplied more than enough power to get the boat moving as fast as it will comfortably go, and while there was turbulence in the well, it wasn’t enough to slosh into the cockpit. At full throttle, the raked transom pulled up quite a pile of water astern. I enjoyed not having to reach behind me to get to the throttle and shifter.

In the bow there’s a recess for stowing a long line threaded through a hole in the stem. The hole squeegees water and seaweed off and any remaining water drains through two discreet holes though the planking. The line pays out again tangle-free and can be adjusted to any length with a figure-eight on a bight. It’s a dandy system. Stowage compartments at the bow and stern are fitted with hatches for access. The side benches enclose large flotation compartments filled with slabs of expanded polystyrene foam—the pink or blue insulation panels you’l find at home improvement stores. Ledges along the side benches support the thwart and it would be quite easy to add ledges along the well and trunk for inserts to create a continuous platform for a crew of two to sleep aboard. There’s an optional bimini top available for shade under sunny skies…which would be a good starting point for enclosing the cockpit for shelter in cold and wet conditions.

CLC has packed a lot of features into the Southwester without making it cluttered or complicated. It offers a lot of options for propulsion, and none of them feels like a compromise. 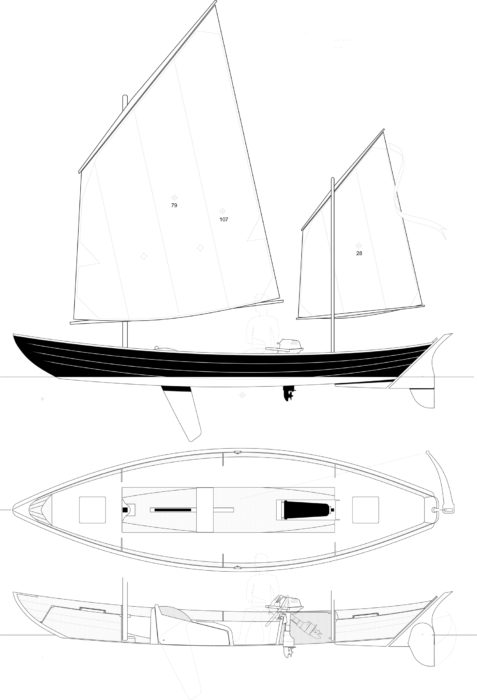 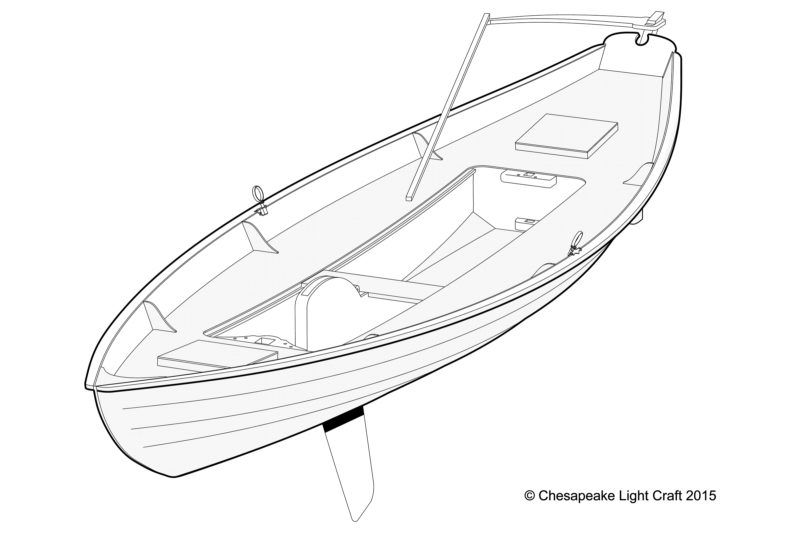 Kits and plans for the Southwester Dory are available from Chesapeake Light Craft.

Any serious angler knows the need for fresh bait for a day of fishing; being able to catch your own and not having to depend on a bait-and-tackle shop is…

After the close of the American Civil War in 1865, John Wesley Powell, a Union Army veteran who had lost his right forearm to a Confederate musket ball, returned to…

rCuising under sail and oars can be an odd combination of casual relaxation and nonstop intensity. It means uninterrupted time on the water, to be sure—and intimacy with nature and…

Over the years I’ve gathered up a lot of rasps, usually with high hopes that their shark-like rows of teeth would cut through wood with ease, but none did much…

Sandy MacKenzie lives in Gananoque, Ontario, just a few blocks from the banks of the St. Lawrence River. He enjoys fishing from kayaks, but putting his fishing rod down to…

I contacted François Vivier in the fall of 2016 to inquire if his Morbic 12, designed for lapstrake plywood, could be built with strip planks. He replied, “Yes, with some…

When Dale Cottrell started building boats in the 1970s, he was working with fiberglass, not wood. At first he made fiberglass canoes, and then in 1984 he designed and built…