For friends and friendly competition

A group of us in Marinette, Wisconsin, and Menominee, Michigan, were inspired by the Scottish Coastal Rowing Association to form a club with the idea to build and row a team boat. We thought the Chesapeake Light Craft Team Dory would be a good boat for us and made arrangements to rendezvous with the Les Cheneaux Rowing Club on a chilly, misty October day in October to try one of theirs on Lake Huron. The weather was less than perfect and the water around the Les Cheneaux Islands was a bit choppy, but the dory handled it like a charm. With our WISHIGAN (for Wisconsin and Michigan) Team Rowing Club newly established, we ordered a Team Dory kit.

Our kit arrived on a 4′ x 8′ pallet along with a box containing the epoxy, watertight hatches, and hardware. All of the parts were well marked and easily identified. We began building with all of the preassemblies: frames, planks, bottom, and transom. The proper alignment of the long three- and four-part planks and bottom panel is guaranteed with the precise CNC-cut puzzle joints. We dry-fit the puzzle joints and found them very tight and almost requiring a hammer to tap them together, but once they were coated with epoxy they slid together quite easily.

For the lapstitch construction, the bottom edges of the upper planks are have a 1/2″-wide rabbet, which creates an overlap and largely eliminates the imprecise alignment of the butted edges between conventional stitch-and-glue panels. The plywood parts had all of the 1/16″ wiring holes precisely predrilled. We were amazed that all the holes lined up perfectly, even where wires had to be pushed through two overlapping planks. Once the wires were tightened, the planks formed tight joints and the hull had the classic lapstrake appearance.

While wiring the parts together was tedious, we were amazed at how quickly the boat took shape. We checked the boat for twist and symmetry using winding sticks at the frames. We departed from the kit instructions at this point, which suggested turning the boat upside down and applying beads of epoxy to the laps between the wires to lock the shape. We were satisfied with the alignment of the hull while it was right-side up, and we opted to add the epoxy tacks between the wires on the inside of the laps.

Four of the five 18mm-thick plywood frames come in halves with puzzle-joint connections between them. The fifth frame, which gets placed in the stern, is a single piece. The frames are sandwiched between pairs of 6mm doublers that extend below the seat level. These reinforcement pieces are set about 1/4″ back from the frame perimeter to make extra room for the structural epoxy fillets between the frames and the bottom and garboard planks.

The gunwale pieces have precut scarf joints and are ready to be glued together. After the epoxy cured and the gunwales were ready for installation, gluing them to the sheer planks required using every clamp we had and every clamp we could borrow. 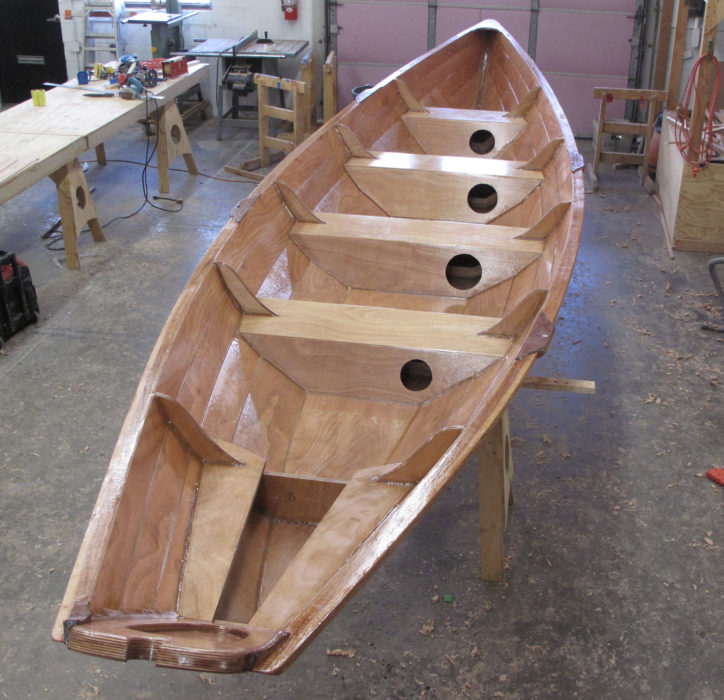 The rowers’ seats are enclosed compartments that serve as foot bracing and, with watertight hatches installed, as flotation and storage. The seat for the coxswain will have a third panel, removable for access to the storage space.

The seats were assembled while we were finishing the sanding of the gunwales and inside of the boat. The top of each seat is 14″ wide and rests on the top of the frame doublers. Bulkheads forward and aft extend down from the seat at a 30-degree angle; the forward bulkheads of the aft three seats serve as foot braces for the rowers facing them. The seats are positioned 45″ apart.

The bottom and garboard planks get a layer of fiberglass in between the frames before the seats are installed. The boat interior, gunwale, and seat assemblies get sealed with epoxy, and the seats’ exteriors are sheathed with fiberglass. The seats get dry-fit to the boat then attached using generous fillets. Watertight ports are added to the aft side of the seat enclosures for access and storage of small items. The coxswain’s seat has a three-piece top; its port and starboard panels are epoxied in place, and the center section is removable for access to storage underneath. Limbers permit drainage from the compartment.

The exterior surfaces of the bottom and garboards get a layer of fiberglass and epoxy; the rest of the planking receives a sealing coat of epoxy. The skeg is fastened to the bottom with thickened epoxy and screws driven from inside the hull and fillets reinforce the connection. During the boat’s first winter maintenance we added an oak “wormshoe” from the skeg to the bow to protect the bottom.

We modified the oarlock pads by increasing their height to allow additional oar-to-leg clearance for rowing in choppy water. Even though the boat is designed with a single oarlock at each station, we installed oarlocks both port and starboard at every rowing location to permit switching the oar to the other side on long rows. 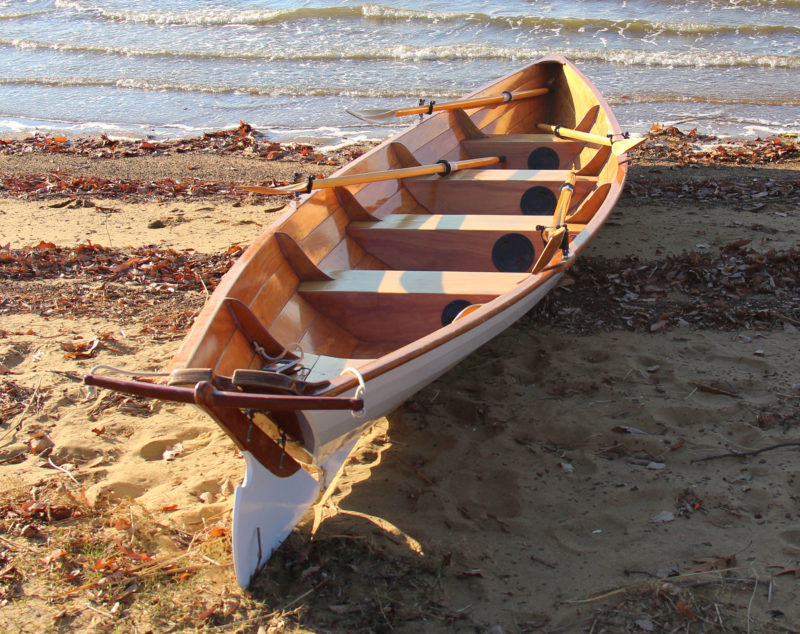 The rudder extends only as deep as the bottom of the skeg, so it can stay with the dory when it’s on the beach. With the boat afloat and the crew aboard, the rudder blade is well covered for effective steering.

Building a CLC Team Dory is a very enjoyable project. The manual is complete and easy to follow; construction is well suited to a novice or an experienced boatbuilder. Following the instructions will make it a very rewarding experience. We built our boat during a winter with crews of two to five people working six to eight hours a week. Our best advice: Careful attention to detail and care in the use and cleanup of epoxy will certainly eliminate a lot of tedious sanding. 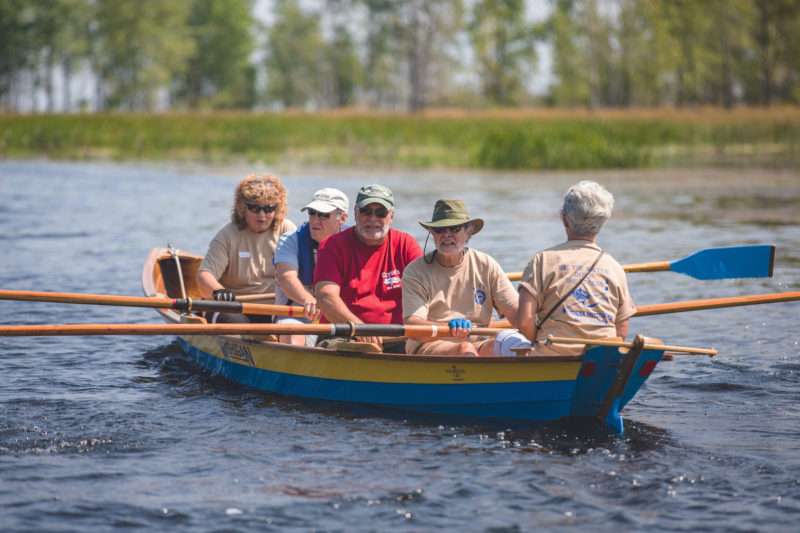 The boat has a maximum displacement of 1000 lbs, so a full crew will have plenty of freeboard.

Our first oars were the traditional carved straight-bladed oars made to the patterns furnished with the CLC kit. The oars were 9′ 6″ long. Our second set of oars had blades of 3mm plywood, bent and epoxy-glued in a curved fixture. The blades were then attached to shafts 9′ 6″ long creating oars 10′ 6″ long. A year later we made an additional set 11′ 6″ long. The shorter oars are ideal for rowing in choppy water and the longer oars are used  in calmer water. This year we have started using the 10′ 6″ oars in the 1st and 4th position and the longest oars in the 2nd and 3rd positions. The rowers sit on the centerline of the boat and the distance from oarlock to handle differs 6″ and this was an attempt to equalize the balance and mechanical advantage for all positions. However, the effectiveness of this change is still inconclusive, perhaps more mental than physical.

Two good rowers can move the Team Dory at a good clip, often faster than a full crew. The 9′ 6″ oars are being used here.

We now have two Team Dories, and this is our fifth year of rowing them. Our group comes from a varied background of fixed and sliding-seat boats with each person handling two oars, so the first things we had to get used were each pulling only one oar and following the cadence set by the rower in the stroke, who sits directly in front of the coxswain. Initially, the boat would rock side to side, but once we synchronized our stroke, the boat rode level. A practiced crew rowing together cruises at a speed of 4 to 5 knots.

The Team Dory is light, about 250 lbs, and easily rides the top of the waves. We have taken our dories out with waves of 1′ to 2′ and have never taken any water over the sides. We carry water scoops and sponges but thus far they’ve been idle. The low profile of the boat gives little resistance to the wind. The boat responds well to the rudder and turns quite easily without the coxswain having to direct rowers to row harder or ease up on one side. 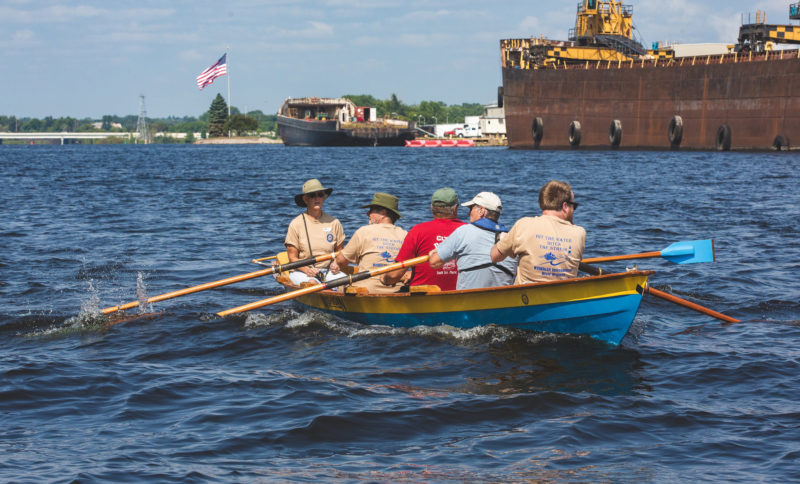 The Team Dory is well suited for training new crews. As Meat Loaf might sing for this crew, “Now don’t be sad, ’cause three out of four ain’t bad.”

While the boats are designed for four rowers and a coxswain, we take the Team Dories out with only two rowers and a coxswain. We balance the boat with one rower at the bow and the other at the third seat. They have oars of different lengths—the boat has a narrower beam at the first seat—and produce an imbalance in thrust, but the coxswain can easily maintain a straight course with a slight angle on the rudder. Rowing with a crew of three has little effect on the speed of the boat; two good rowers can often be faster than a full crew of five.

We often travel to participate in regattas with other teams, and modified a trailer to accommodate one Team Dory with a second nested inside it, resting on styrofoam pads on the seats. An event flotilla usually consists of Team Dories and 33′ pilot gigs, each with six rowers and coxswain. The Team Dories outrun the gigs on a course with twists and turns, but have difficulty keeping up on a long, straight course.

The rowing stations are 45″ apart, a generous spacing which will keep the crew on good terms, even if the stroke is in mid-drive and third seat is on the recovery.

Most of our rowing has been on the protected waters of the Menominee River, but we have also had the Team Dories out on Green Bay, Lake Huron, and Lake Superior in waves up to 2′ and have yet to take on any water. And while neither boat has ever foundered, the air-tight seat compartments provide reassuring flotation. The dories are also tough in spite of their light weight; we have inadvertently hit everything possible from docks to bridge supports with little damage aside from scuffed paint and varnish. We highly recommend the Team Dory. It is an exciting construction project, and the finished boat is a pleasure to row with our friends.

Scott Craw of Marinette, Wisconsin, was Lead Structural Engineer at Marinette Marine, a ship-building company that produces vessels for the Army, Navy, and Coast Guard. He retired in 2011 and, during the first winter of his retirement, he built a Wineglass Wherry, noting “winters are long in Wisconsin.” His plan was to use the boat to fish the local waters but he discovered the joy of rowing and, as he puts it, has yet to drown a worm. Scott started following the Scottish Coastal Rowing Association on Facebook. He and a fellow rower, Mike Kushman, wanted to have a similar group on the Great Lakes and the WISHIGAN Team Rowing was born. The club offers free rowing to the community twice a week.

Team Dory kits are available from Chesapeake Light Craft for $2952. A 26′ version is available on demand.