A breeze to build, a pleasure to row

The Bella 10, Sam Devlin’s jaunty 9′ 9″ rowing skiff, started out being called the 5×10 skiff because all of the plywood it required could be cut from a single 5′ x 10’ sheet. When Sam was teaching boatbuilding classes, the 5×10 sheets saved him the time it took to scarf 4×8 sheets together to get the length needed for a small yet able rowing boat. There are a number of boats designed for a single 4×8 sheet of plywood, and while they are interesting as design challenges, they don’t have the length to be pleasing to row or the freeboard to carry an adult safely in a bit of a chop. The Bella 10 has both.

Designed for stitch-and-glue construction, the Bella 10 can be built from plans or a kit. The plans consist of four pages of drawings that include the cutting schedules for a 5′ x 10′ sheet of 1/4″ (6mm) BS1088 plywood as well as for two sheets of 4′ x 8′ plywood scarfed together end to end. One marine-plywood supplier sells the 5×10 sheet of five-ply okoume for about $133 and the two sheets of 4×8 that would be required for $146, so you’d save a bit of money as well as the time required to scarf the two sheets together.

The shapes for the side and bottom panels are determined by offsets measured from the edge of the plywood sheet, so the pieces all nest together and produce minimal waste. The transom gets two pieces cut, and they will be sandwiched together with epoxy at the start of construction. The drawings include a 24-step list of the building sequence, and an 80-page manual detailing stitch-and-glue processes is included with the plans. The book Sam wrote 25 years ago—Devlin’s Boat Building—is a good companion for those who like to study up before they build.

In the included manual, Sam details an alternative to the drilled holes and twisted wires in the stitches of stitch-and-glue: stapling the panel edges together. A pneumatic stapler with stainless-steel staples of the right length and gauge can speed the job of putting the panels together and have the added benefit of leaving virtually invisible holes after the seams are glued and the staples removed. Sam had students in one of his boatbuilding classes staple three Bella 10 hulls together; it took 25 minutes for the first, 20 minutes for the second, and 10-1/2 minutes for the third.

After the panels are stitched or stapled together, the hull is opened up to its proper shape with three spreaders while the seams are epoxy-tacked, have the stitches removed, and then get filleted and ’glassed. The exterior gets a layer of 6-oz fiberglass and epoxy to protect and strengthen the plywood. The remaining work is with 3/4″ hardwood lumber: 1-1/4″ inwales and outwales to stiffen the sheer, knees and a breasthook in the corners, an 8″-wide thwart and cleats to support it, and a low, glued-in foot brace. Flotation is provided by closed-cell foam blocks, easily obtained and cut from a throwable boat cushion, then screwed to the bottom of the thwart.

The Bella 10 I used for my trials was built by Devlin Designing Boat Builders as a showroom boat and impeccably finished. The foot brace and foam flotation were absent, and the sheer had the addition of a canvas-covered padded guard. At 52 lbs, the boat was light enough for me to carry it as I would portage a canoe. I rolled it over on the lawn, lifted the bow, and backed in to rest the thwart on my shoulders. Pulling the bow down raised the transom off the ground, and I could then easily walk with the boat. For transporting the boat with its oars and other gear aboard, my cart was a better option.

The Bella 10 fit nicely stern-first into the bed of my half-ton pickup truck. The hull slipped between the wheel wells with a bit of room to spare, even with the bed-liner insert taking up some space. Not having to fuss with a trailer or lift the boat up to a set of roof racks was a welcome change.

I could lift the boat to the racks on my Chevy Blazer, but it was an awkward lift approaching the racks from the side. The thwart is just above the boat’s center of gravity, so it makes a good handle for lifting and controlling the boat, but the boat’s beam makes it awkward when you’re on your own.  It would have been easier to approach the back end of the car with the boat in canoe-portage mode, rest the bow on the back rack and the transom on the pavement, then lift the stern and slide the boat forward. I didn’t give that a try because I didn’t want to rasp the transom on the pavement or grate the canvas gunwale guard across my wooden roof-rack cross bars.

When I had the boat afloat, I first climbed aboard over the transom and later found it easier to step in and out over the side. About 8″ of water was enough to keep the boat from touching bottom when embarking.

With a beam of 3′ 8-3/4″, the boat was a bit nervous while I moved about, but settled down to be very steady once I got seated. I could slide on the thwart to about 6” from the side of the boat and look straight down into the water. That put the gunwale guard right at the water, as far as I could safely push the secondary stability.

For rowing, the thwart is in a good position relative to the oarlocks. I could sit well forward and keep my tailbone from pressing uncomfortably against the wood. With the foot brace omitted from this boat, I cobbled one together with a stick of wood, some rope, and a strap so I could row the boat properly and with full power. Once underway, I really liked the boat’s rowing geometry and the fit of the 7′ spoon-bladed oars. The handles had a 2″ overlap, right on target. On the drive, I could pull them straight at my solar plexus and have enough clearance over my legs on the recovery to avoid clipping wave crests. It was a nice compact and powerful stroke, far from the windmilling that small rowboats often seem to encourage.

The Bella 10 carried its way very well between strokes, easing the load at the catches, and it took very little effort to make 3 knots. At an aerobic-exercise pace I could sustain close to 4 knots and an all-out effort in a short sprint peaked just shy of 4-3/4 knots. I could row stern-first at 3 knots; and the transom didn’t seem to be bulldozing a big wave ahead of it.

The skeg does a good job keeping the Bella 10 on track without restricting maneuverability. The boat spins like a top and can do a 360-degree spin in just six push-pull strokes. In 1’ wind-driven waves taken on the quarter, the bow will occasionally veer, but the instant response to a corrective stroke sets the boat back on course. Rowing hard into an 8’-knot wind and waves just beginning to curdle before whitecapping, the forward end slapped some of the smaller waves, sending spray to the sides, but not causing the hull to shudder or slow down.

The Bella isn’t designed for use with an outboard—aside from the lack of buoyancy compartments that would be required, I suspect that my 2-1/2 hp four-stroke would be too much weight for the stern to support—but Sam and I agreed that an electric motor would be worth a try.

I borrowed an EP Carry from PropEle Electric Boat Motors, which I thought would be a very good match for the Bella 10 because it weighs just 21 lbs, including the battery. With the motor running at full throttle, the speed reading on the GPS wavered between 3-1/2 and 3-3/4 knots. Because I had to keep my hand on the motor’s tiller, I couldn’t get as far forward as I should have been to get the boat at its best trim, but I wasn’t doing the work, so it didn’t matter much.

A tiller extension (built to accommodate the EP Carry’s atypical tiller) would have allowed me to sit comfortably on the thwart. Getting the bow down into the water would also help with steering. With it slightly airborne, the wind would hamper upwind turns. The boat has a Coast Guard plate on the transom noting that the boat has a maximum capacity of “2 persons or 300 lbs,” so having a passenger in the bow would allow a helmsman to be comfortably seated on the bottom aft of the thwart.

The Bella 10 is a splendid little boat that is inexpensive (it’s Devlin Designing Boat Builders’ most affordable kit), easy to build and transport, and an able boat on the water. It would serve well as a tender, a family boat for training young rowers, or an easily portable vessel for exploration and exercise. 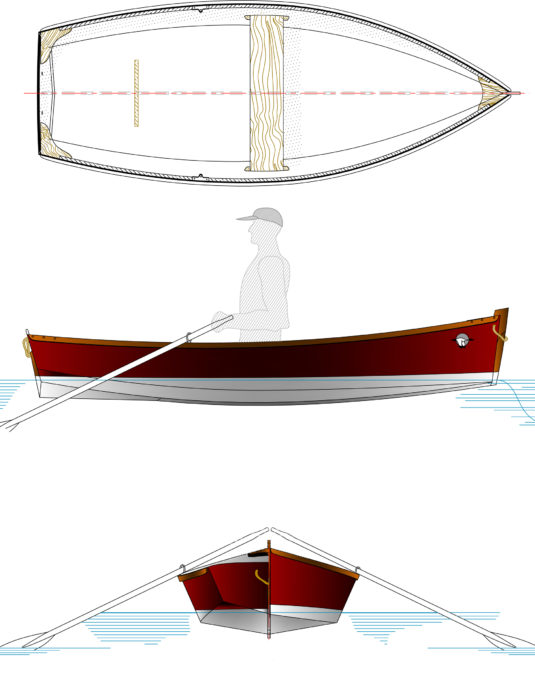 hile I was working with John Leyde on this issue’s Reader Built Boat story about building a skiff with his grandsons, I was particularly struck by why he had come...

Baton Rouge, Louisiana, lay only a half mile away, but I could not get there. I was on the wrong side of the river and as I waited to cross,…

The rigid wheels may not be as good in soft sand as some of the wide inflatable wheels, but their 14” diameter makes it easy to run over the rough…

An Unscrew-Um is a hardened-steel tube with an expansion slot on one side and cutting teeth on the end. Used with a power drill run in reverse, it descends over…

Last fall, John was getting anxious about winter coming on. He had put his steamboat to bed for the winter and was without a project to carry him through the…