I grew up in central Massachusetts, and still live there. When I was a kid, each summer my family rented the same beach cottage near the east end of the Cape Cod Canal. It was there that my love of saltwater fishing began. Around 1990, intrigued by having seen a fellow using a fly rod on the beach during one of my saltwater spin-fishing outings, I started fly-fishing in the salt, working Cape Cod waters from shore. As it is with most shorebound anglers, thoughts about buying a boat were inevitable, but I lived two hours from the Cape and had a young family, so I couldn’t justify the expense. To get a taste of what it might be like to have access to all that water beyond the reach of my best cast, I hired Cape Cod saltwater fly-fishing guide Capt. Bob McAdams.

On the day of the charter, Bob had me meet him at a town landing on Nauset Marsh in Eastham on the lower Cape. His boat was a sharp-looking 16′ open wooden skiff with a tiller-steered 30-hp outboard. The skiff had been custom built by Walter Baron of Old Wharf Dory in the neighboring town of Wellfleet. At first glance, I was a bit concerned about the boat’s stability as both Bob and I were each over 200 lbs, but I climbed aboard and sat facing forward on the wide amidships thwart. As we got underway, the boat skimmed beautifully through the marsh, and it wasn’t long before we got to our fishing spot. When I stood and started to swing the fly rod for my first cast, my concerns about stability quickly dissipated. We caught several fish, and I was really impressed with the skiff as a fly-fishing platform.

That was in 1994. I continued to fly-fish from shore on the Cape whenever I could, sometimes even stealing time from my forestry consulting business. I help woodland owners manage their forests for healthy, sustainable timber growth, and since I love working with wood in its natural environment, it occurred to me that any boat I was ever going to own should be made of wood. I didn’t have the skills, time, or tools to build one myself, so I looked up and contacted Walter Baron, the builder of Bob’s boat, and learned that he had dubbed the design, appropriately enough, the Nauset Marsh Skiff.

I had found my boatbuilder, but another 10 years passed as my wife and I got our kids through college and out on their own. By then, building my dream skiff had moved to the top of my bucket list and I had several conversations with Walter, as well as a couple of visits at his shop to discuss a design. After years of dreaming about it, I knew exactly what I wanted in a saltwater fly-fishing skiff. It would be around 16’ and easy to trailer, launch, and retrieve by myself with a flat bottom so I could run in the shallows and beach it upright. I wanted raised casting decks fore and aft with storage below them, and economical outboard power with speed capability around 20 to 25 mph.

After exploring a number of traditional and plywood designs, we eventually circled back to the boat that had so impressed me originally, the Nauset Marsh Skiff, and Walter began construction of mine in January 2014. Five months later we launched the finished boat.

The skiff has stitch-and-glue plywood construction, with the exterior sheathed in fiberglass cloth set in epoxy. The flared 3/8″ okoume topsides and the transom—a sandwich of a 3/4″ cedar core glued between layers of 3/8″ sapele marine plywood—are joined to a flat, narrow, 1/2″ fir marine plywood bottom. Assembled, these initial elements immediately revealed the pleasing lines of the boat, highlighted by a gentle, upswept sheer forward and 5″ of rocker along the bottom. The greatest beam, measuring 66″, is just forward of the stern to support the weight of a 25- or 30-hp outboard. I went with the 30 hp Evinrude E-Tec—at 150 lbs, it is no heavier than the 25 hp.

I wanted to pilot the skiff from as far aft as was practical to accommodate a large, raised, fly-fishing-friendly, forward casting deck, but still leave enough room for a smaller, raised casting deck in the stern. I abandoned the cost-saving consideration of tiller steering in favor of a small center console, with power tilt and trim controls on the motor for comfort, and ease of operation. I also wanted to be able to stand comfortably at the helm while underway without having to bend over to grasp the wheel or throttle. To that end, Walter made a cardboard mock-up of the console and had me down to the shop for a couple of fittings to get the height just right.

One of the features I had seen and loved on a couple of Walter’s boats was the look of bright-finished cedar-strip side decks. Not only are they beautiful, but they add great strength and rigidity to the hull. On my skiff, as an added detail, Walter chose red balau, an Indonesian hardwood, for the outermost strip on the side decks, and for the coaming around the cockpit. Finished with Epifanes Rapid Clear for ease of application and maintenance, the results are stunning as the rich, dark reddish-brown color hardwood contrasts beautifully with the light color of the cedar.

Foam-filled flotation chambers in the bow, and in the port and starboard corners of the stern, sit just below the cedar-strip decking. The clear-varnished transom is the last of the brightwork. Except for the cockpit sole, which is painted with Skid-No-More, an acrylic coating textured with rubber particles, the remaining surfaces, inside and out, are finished with Epifanes two-part polyurethane paint for its high gloss and durability. The orange hull and white faux sheerstrake are a tribute to my late father-in-law, who built several small wooden boats over his lifetime, the last of which, wistfully named ONCE IN A WHILE, featured similar hull colors.

Since my boat lives on a trailer, we skipped bottom paint. SeaDek, a peel-and-stick nonskid foam, covers the front and rear casting decks. The battery and a 6-gallon portable fuel tank sit under the console and integrated passenger seat, respectively. To keep the rigging clean and out of the way, Walter made some removable cedar floor boards to cover the fuel line, steering, and battery cables between the console and the outboard.

The 30-hp motor moves the boat along at a GPS-measured 25-mph top speed. Like any flat-bottomed hull, it will pound in a chop at higher speeds. Because the helm and console are positioned well aft of the midpoint, I initially had some porpoising above 20 knots when I was alone in the boat; 50 lbs of ballast in the forward hatch eliminated that problem completely. If I throttle back in rough water, the 5″ rocker in the bottom allows the skiff to smoothly slither up and over moderate swells and boat wakes. Even without spray rails, the skiff is remarkably dry, as the flared sides deflect virtually all spray, in all conditions and at most speeds, save for a wind directly abeam, when some spray will inevitably find its way over the rails.

Two parallel 8′ long 1″x1″ bevel-sided, white-oak shoes running along the stern half of the bottom hold the boat where you point it. They’re positioned to slide between the trailer bunks to help align the skiff when hauling out. Sharp turns at speed bury the hard chine, and the skiff holds beautifully with little or no drift. It floats in about 6″ of water with the engine tilted up, and runs in about 12″.

The forward casting deck is very stable and comfortable to stand on and cast from. There is an anchor locker hatch forward and a larger second hatch for storage below the deck. The smaller aft casting deck is higher, and is fine to cast from in flat water, but is a little less secure in a light chop. The rear deck flips up to provide access to a 50-quart cooler. Fly-rod racks and tip tubes are tucked out of the way under the side decks in tubes—two forward and one aft—and offer secure storage for four 9′ fly rods both port and starboard. Pop-up cleats fold flush to eliminate fly line’s inadvertently catching on them.

The boat’s performance has met or exceeded all my expectations. It remains a source of great joy, pride, and satisfaction. The skiff turns heads and generates questions and complements wherever I go, and I am always proud to credit its builder for creating the piece of functional art that it is. People especially seem to like and appreciate the name my wife came up with, which ties together my personal history, my profession as a forester, and my gratitude for all the blessings of my life, not the least of which is this fine little craft named OUTTA THE WOODS.

Craig Masterman, 65, has lived in central Massachusetts most of his life. He and Marjory, his wife of 42 years, have three grown children and a grandson. Craig has always appreciated the natural beauty of both trees and wood as a building material, stemming from his 40-year career as a forester. He plans to fish the flats and estuaries of southwest Florida as well as the inshore waters of Cape Cod as often as he can in his approaching retirement. 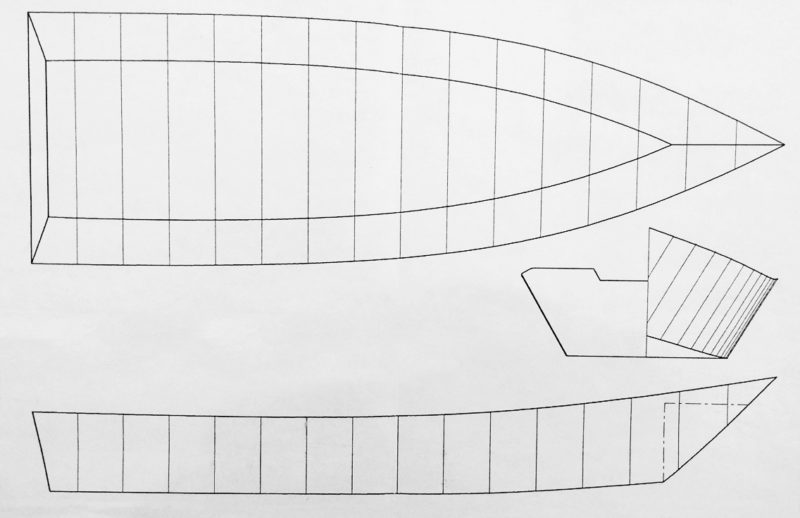 In one of the do-it-yourself magazines I liked to read, I saw an ad for a bandsaw built from a kit. It had the necessary metal pieces; all I had…

The Ilur arrives on pallets as a precut kit with CNC-cut components, including a strongback on which the hull is built. One of the key aspects of the kit-built method…

grew up in central Massachusetts, and still live there. When I was a kid, each summer my family rented the same beach cottage near the east end of the Cape...

The Voyage of the MARY SAVAGE

Downstream from the city, the banks became heavily tree lined, and we made our way between small wooded islands and past the mouths of numerous back channels. A pair of…

Adhesive-backed sailcloth is commonly used for numbers and class insignia on sails. It comes in several colors, and we used Challenge brand, purchased from Sailrite. The lightweight 3.3-oz polyester fabric…

To get my 20′ West Coast dory out of the garage I had solve two problems: the trailer fenders have only about 2″ of clearance between the sides of the…

Audrey and I have a little fleet of small boats and do a lot of work taking care of them. Setting grommets is a regular task when we’re making and…

The Sweet Pea is the perfect little hybrid vessel that fits our needs perfectly. It’s a handsome boat with pleasing lines and, despite the modern construction, has a heritage in…