Clint Chase of Chase Small Craft wrote of his Drake Raceboat: “This was the first boat that I designed totally from the numbers.” It’s the third in his series of Drake Row Boats and, at 18′3″, it fits in between the Drake 17 (17′4″) and the Drake 19 (19′2″). While the Drake Raceboat has a familial resemblance to these two American-born relatives, I suspect that there is some Finnish blood in its veins. The fine entry, the ‘midship cross section as close to semicircular as you can get with four wide strakes, and the light laminated frames look a lot like they came from the boats Finns use for racing on their vast network of interconnected lakes.

The Drake Raceboat kit includes all of the computer-cut plywood parts for the boat as well as engineered wood panel pieces for the building forms. There are eight molds, all notched to fit mating notches in the two girders that support them. Five of the molds are faceted where the planks land; the remaining three are curved to serve as forms for laminating the boat’s three frames. Eight 3/16” strips are glued up over the form to make up each frame, and after the epoxy cures, the frame faces are planed flat. Placed back on the mold, a template is used to trace the facets for the planks.

Each plank is made up of three pieces of 4mm plywood to be joined with an unusual three-step scarf joint, which has an internal interlocking puzzle joint concealed by the outside steps. The planks have 1/2” laps between them; to keep the limber plywood running fair between molds, a temporary clamping batten is used when gluing the laps.

The inwales, made of 1/2″ stock, extend just past the frames fore and aft. The outwales run from stem to stern and are built up of three pieces, making a distinctive broad flange that stiffens the sheer. The oarlocks rest on pads fastened to these wide rails. While the kit doesn’t include parts for flotation compartments—the instructions recommend the use of float bags instead—the boat I tested had small sealed compartments in the bow and stern. The builders, Jim Tolpin and Oscar Lind of Port Townsend, Washington, asked Clint to provide patterns for the plywood pieces. The compartments were sealed, but at my suggestion were each given a small hole in the bulkhead to allow air pressure to equalize.

This boat tipped the scale at 82-3/4 lbs, a bit over Clint’s predicted 75 lbs. Jim and Oscar made some modifications in addition to the flotation compartments that would account for the additional weight. They substituted solid mahogany for the plan’s plywood seat, breasthooks, and stretcher; added 1/2″ brass half-oval running from stem to stern and 6’ lengths along the gunwales amidships; and applied several extra layers of paint. Even with the extra weight, their boat seemed feather light. The mahogany breasthooks made solid handholds for a tandem carry.

I’d heard from the builders that the Raceboat was rather tippy, but I think much of their uneasiness could be attributed the boat’s wide beam. Getting aboard requires a long step to plant a foot on the centerline and a long reach to get a hand on the far gunwale. The boat’s light weight and rounded midsection make it quick to react to weight planted off center. I’m 6′ tall and have limbs long enough to make the stretch and keep the boat flat. Any rower seated and centered on the thwart will likely feel stable and secure.

The rower’s bench is a fixed 10-1/4″-wide thwart that’s set on a short riser glued just forward of the ’midship frame. The footboard is pinned to a pair of 24″ rails with holes every 2″. Although the increment works well enough when adjusting for leg length, a spacing of 1″ between holes would offer not only finer adjustments but also the ability to set the footboard at a different angle to suit the rower. That’s a minor point and an easy modification to make while building the boat; the structure of the footboard is quite solid and provides a foundation for a powerful stroke.

The boat is quite easy to accelerate; a half dozen strokes and it was off and running. I did some speed trials in a marina where there was neither current nor wind. With a lazy, relaxed effort I easily maintained 3-3/4 knots; a sustainable exercise pace brought the speed up to 5 knots.

It wasn’t easy getting a steady reading on my GPS while I was doing sprints at full effort. Even though the Raceboat is rowed from a fixed thwart rather than a sliding seat, the shifting of my weight as I leaned aft to the catch and forward at the release created an equal and opposite reaction in the boat, dramatically slowing it down on the drive and speeding it up on the recovery. Fluctuations in speed may not be quite so noticeable in a heavier boat, but in the lightweight Raceboat they spanned at least 1-1/2 knots. I’d estimate that the boat’s sprint speed averages out around 6 knots. It’s a fast pulling boat.

To make the most of the Drake Raceboat’s speed, it’s essential to have good technique and a good pair of oars—spoon blades, of course, for a good purchase, and a low swing weight for quick recoveries. On my second day of rowing trials, Tom Regan of Grapeview Point Boat Works delivered a new pair of 8’ spoons. They were a good match for the Raceboat. With slender blades that were nimble in and out of the water, the oars could keep up with the boat.

The Raceboat tracked well and there was no need to correct its course on a straight run. It also responded well to turning strokes and was easy to spin around in place as I pulled one oar while backing the other. There wasn’t much wind during the weekend when I rowed the Raceboat, perhaps about 8 knots but while I was rowing across the wind I didn’t feel the boat had any tendency to weathercock. The wind was offshore and made the water flat, but I did have a few powerboat wakes to drive through. The Raceboat cut through them smoothly and they passed by without much effect on the hull.

The Raceboat I rowed arrived on a small trailer but could be set on roof racks. I regularly cartop a 100-lb tandem decked lapstrake canoe, by lifting one end at a time. A compact SUV like mine provides enough of a span to keep steady an 18’ boat as light as the Raceboat, which is much lighter and easier to manage. If your back and height aren’t a good match for the lift, a trailer is the better way to go

While the Drake Raceboat is designed “for the greater speeds in race conditions,” you don’t have to compete to appreciate the boat. It will give you an exhilarating workout and reward improvements in your stamina and technique, but it’s not so high strung that you can’t take it out for a relaxing outing. 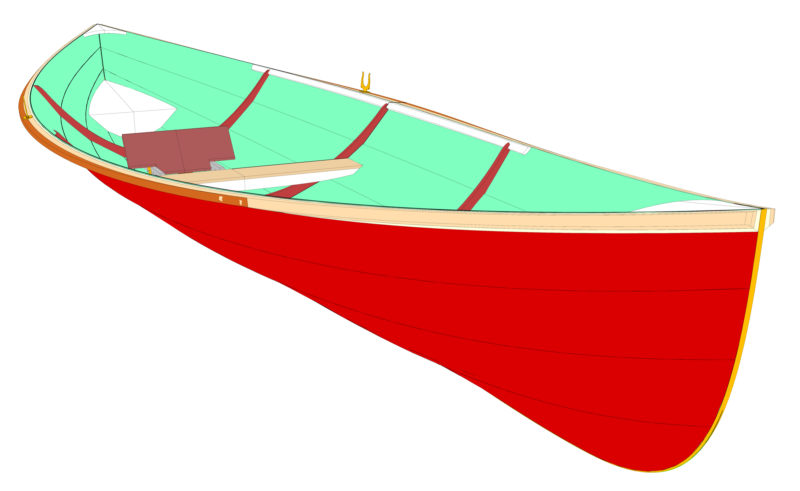 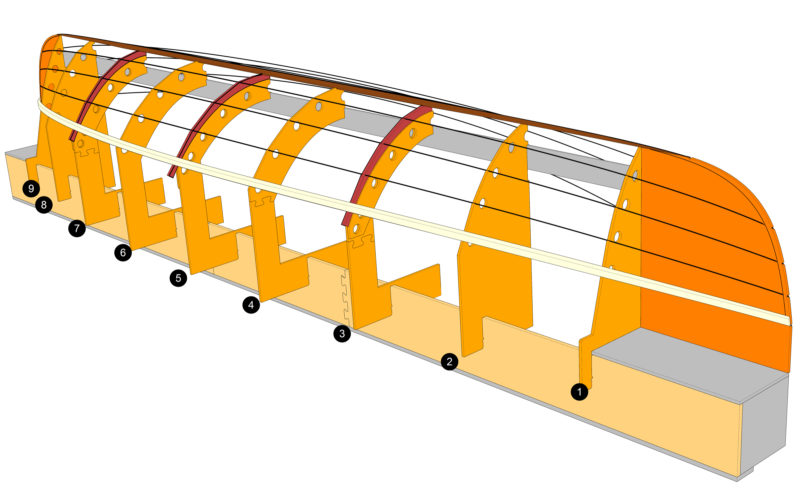 The Drake Raceboat will be available as a kit in November of 2017 from Chase Small Boats. You can also build from the plans package, which includes templates for the molds and forms for the bow and stern—planks will require spiling.

The diminutive yacht OYSTER, a Milford 20, is a modern take on the early New Haven sharpies that worked the oyster beds along Long Island Sound’s Connecticut shores. Inspired by…

The chop stirred up the bottom across miles of shallows, turning the water gold under the midday sun. I closed on the windward shore until I was in calmer water,…

The nights I slept in the Outback Swag Tent, I was just camped in the back yard. After one night in it I had the information I needed and could…

At the ramp, GYPSY SOUL slipped into the water for the first time. Scotty and Juilio hadn’t sailed a lug rig before, but hauled in the main sheet and took…