Last year I was watching old newsreels on British Pathé’s website and found one filmed in 1950 at the Eton College Boathouse on the River Thames. It was an interesting glimpse of craftsmen working on racing shells and oars, but at first I missed a hidden gem. A few months ago, I watched the film more closely when a friend who’d also seen the newsreel asked me about the work stand the oarmaker was using.

A three-legged stand that supported the blade-end of the oar was clearly visible, but there were no clear shots of what was at the other end. Watching the oarmaker, identified as Len Ferne, I was puzzled by the way he kept moving the oar off the top of the stand, lowering it a few inches to one side, occasionally rotating it, and putting back on top. It could have been interpreted as a nervous tic, but I was pretty sure there had to be a good reason for it.

One shot offered a glimpse of what appears to be the leg of a second stand. I guessed that was supporting the oar handle. The oar blade was cantilevered beyond the support, but it stayed put even with Len planing as vigorously, so something had to be holding the loom down. In another shot, Len did his “nervous tic” twice and both times the loom of the oar come to an abrupt stop in the same place, confirming that there was something fixed over the loom. Len had to give a noticeable tug to get the throat back on the stand, so putting a slight bend in the oar was what held it in position. Brilliant.

I’ve made a fair number of oars for myself and other rowers, and after watching Len work, it was clear that I’d been wasting a lot of time clamping oars to my workbench. Before I made another pair, I had to duplicate the Eton system.

The project required four 8′ 2x4s, three for the stands and one for a post that would anchor a block to press down on the loom. I cut the legs 42″ long with 65-degree angles at both ends. (I would make the working leg about 45″ long if I were to make another stand.) On the tablesaw I made half-laps centered 32″ from the bottom end at 50 degrees. The third legs have a 50-degree bevel at the top, a 65-degree bevel at the bottom. Before drilling the hole for a single bolt to hold all three legs together, I cut a shallow mortise and tenon to ensure that the third leg doesn’t rotate out of position.

I cut the vertical post just a fraction of an inch longer than the floor-to-ceiling space and tapped it in with a mallet until it jammed in tight (that part of the ceiling, being under my front porch, is concrete).

I’m certain the stands in the Eton boathouse were fastened to the floor. My concrete shop floor didn’t allow that, and I couldn’t afford to dedicate so much space to a single purpose, so I used loops of line to suspend some heavy weights on the stands.

To work the oar blade, its handle end goes in the V of the stand that is set on the back side of the post. That stand should be set so the part of the loom where the leathers will be is even with the post. The throat of the oar then rests for a moment on the top of a leg on the other stand. For the block that gets clamped to the post I used a piece of 1-1/2″ red cedar. It is a soft wood that is less apt to damage the oar. I set the cedar block on top of the oar and marked the post along the top of the block. With the throat of the oar then lowered into the V, I clamped the block about 1/2″ below the mark. When I lifted the throat out of the V, there was the enough pressure to keep the oar firmly in place while being worked, and yet it’s not difficult to lift it to switch its position.

I quickly discovered three things that weren’t working well when I was shaping a glued-up blank for an oar. First, I had cut the top ends of the legs square, and the resulting edge of the leg, as it sits at an angle to the floor, creased the wood at the throat of the blade. I checked the film and saw that the tops were cut parallel to the floor to avoid that damage, so I used a carbide cup on my grinder to flatten the tops. Second, I had made both legs the same length, but discovered the one not supporting the throat interfered with using the drawknife. Another look at the film showed the idle leg was cut shorter; I did the same to my stands, leaving enough length for the V between the legs cradle the oar handle. And third, the oar throat occasionally slipped off the stand. I had noticed in the film that the top of the working leg had a hollow, and I had attributed that to wear, but the groove is intentional and resists lateral pressure on the oar.

Once I got the details right, the stands were a pleasure to use and made the work go ever so much faster than it had with clamps. I could work on both sides of the oar, and shifting it required only one hand—I didn’t even have to put a tool down. Flipping the oar end for end allows work on the whole oar. The system would work for small spars, too.

Christopher Cunningham is the editor of Small Boats Monthly. He made his first pair of oars in 1978 and has made oars for all of his boats and for a few other rowers. 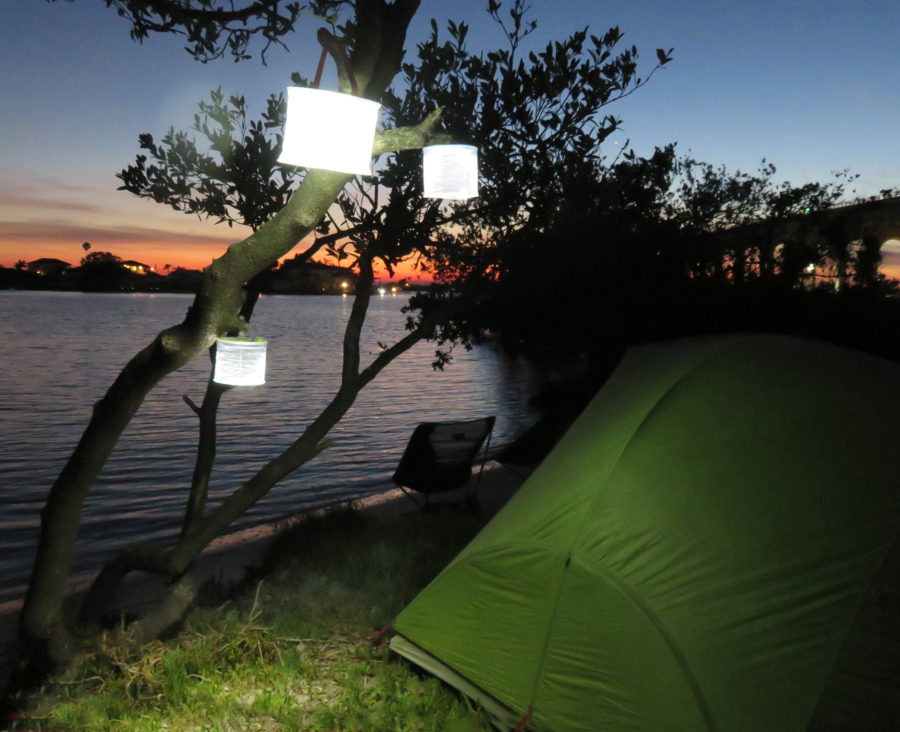 When it came to selecting a tiller for the rudder of my Sooty Tern, UNA, I had to consider the two options designer Iain Oughtred provided for getting around the…

I made a blank for my rudder by gluing layers of marine ply with epoxy to the required 1″ thickness. I have found that the plywood, in spite of its…

The C-clamps I’ve been using for a few decades now have seen more than their fair share of epoxy, either dripping out of the joints or dabbed on by the…