John Welsford’s Navigator is a 14 1/2′ centerboard beach cruiser and daysailer built in glued-lapstrake plywood. Welsford offers several rigs for this pretty little boat: Bermuda racing sloop, a lug yawl, and a gaff yawl. Being attracted more to traditional boat types and rigs, I chose to build the gaff yawl. The combination of the Navigator’s jaunty sheerline and yawl sail plan gives her character, and indeed, she can be built with as much character and tradition as the builder would like without appearing quaint. The choice of rig, sails, materials, and paint and finish schemes can place her comfortably in the 19th or 21st centuries or anywhere in between.

Welsford’s plans show an option to mount a small, low-powered outboard on the boomkin, but most builders have opted to mount outboards up to 5 hp on a bracket fixed to the transom. I use a 24-volt, 1-hp electric outboard to help move her along to and from the dock and to get me home when the fickle Midwest winds die. The instructions note placing oarlocks 350 mm (13 3/4″) aft of an optional seat installed for rowing, and many builders equip their boats for rowing. I did too and found that the Navigator is not well-suited to long-distance rowing because of its 5′10″ beam and challenge of placing rowlocks either on the cockpit coamings or gunwales. I mounted locks on the coaming, which leaves about 9″ between the lock and the gunwale, causing the oars to rub on the gunwale. The Davis pattern fold-down oarlocks I used brought the lock inside the coaming. Side-mount or angled-mount rowlocks mounted outside of the coaming would provide more clearance for the oars over the gunwales. My seat for rowing is on top of the centerboard case, which gets me by but is not ideal for any long stretch of pulling. Doing some experimenting with the rowing accommodations and geometry may improve upon the arrangement I currently have.

The Navigator has a near-vertical stem giving way to a sharply curved forefoot and a very fine entry, enabling the boat to slice through a stiff chop with a minimum of fuss. The forward sections have a nice flare above the waterline that helps to keep the bow from diving too deeply into waves. The hull’s flat bottom and firm bilges provide for excellent stability. The sheerstrake curves gently upward and inward to meet the slightly raked transom with a touch of tumblehome.

Welsford originally designed Navigator as a race trainer to serve the needs of a local sailing club near his New Zealand home, but the club opted for an existing class boat. He later modified the design for another client wanting a dinghy for extended open-boat cruising. The changes included a large locker forward of the mainmast as well as two side lockers under the cockpit seats to keep gear away from spray and from any water that might enter the boat. These also form airtight compartments to lend buoyancy in the event of swamping. These compartments, the openness of the cockpit, and the space under the side decks provide ample storage space for camp-cruising and still leave room for four to enjoy an afternoon’s sail.

Building a Navigator is a straightforward proposition. Welsford provides 11 detailed sheets of plans that include a comprehensive accounting of fastenings, materials, and hardware, as well as helpful suggestions for rigging. Welsford’s concise building instructions have just enough detail to point novice builders in the right direction for getting things done properly and efficiently, while allowing them to make decisions based on personal preferences. Being able to choose between aluminum or hollow bird’s-mouth spars, plywood-sheet or laid-teak decking, fancy do-it-yourself wooden blocks or hardware-store pulleys, and varnish or paint is much of the great fun in building a Navigator.

The project fits nicely in a single-car garage; perfect for the amateur builder who may not have access to a dedicated shop. Navigator is put together upright on a strongback. Bulkheads and frame stations are cut and assembled from marine-grade plywood and attached to the bottom panel along with the keelson, stem, and transom. Longitudinal stringers connect the bulkheads and frames and provide the builder with glue-and-screw landing places for the plywood plank edges. The amidships frames anchor the centerboard trunk, while the compartments in the bow and the cockpit seating provide flotation to both ends of the boat. Four strakes bring us up from the bottom to the sheerline. Once the hull is planked up, the boat is flipped upside down for fiberglassing up to the waterline, the addition of the keel, skeg, false stem, and outside finishing work.

At this stage, I reconfigured the strongback lumber to create a cradle on casters that would allow me to move the boat within the garage as well as roll the project outside or back in as necessary for decking, interior appointments, and rigging.

Welsford specifies either a box-laminated wooden mast, or an aluminum one. I opted to build a hollow mainmast of Sitka spruce using the bird’s-mouth method; dimensions are fully specified in the plans. The mast is just under 14′ long, and the gaff-yawl version of the boat allows all the spars to fit comfortably within the length of the hull for easy transport. The boom, gaff, bowsprit, mizzen, boomkin, and sprit boom are solid, laminated of spruce or pine.

The mast for the yawl rig I chose is stepped through the foredeck just ahead of the cockpit coaming; the mast of the sloop rig is stepped through partners just aft of the coaming. To make rigging easier, I chose to build-in a mast hinge, which saves me from having to step the mainmast by myself when solo sailing, and keeps my boat almost completely rigged as it sits on the trailer. The mast is designed with tensioning stays to keep the jib’s luff straight, and the standing rigging makes a hinged mast a reasonable modification. I made sails from a Sailrite kit cut to the dimensions specified in the plans; there are finished sail packages for this Navigator available online from several sailmakers.

I launched my Navigator, PUFFIN, on June 5, 2016, after two-and-a-half years of working on the boat nights and weekends. Dedicated builders have completed it in a few short months; the build time is largely dependent on the builder’s choice of fit and finish, and, to a lesser degree, by one’s skills at the outset of the project. This being my first scratch build, my learning curve was steep, and much time was spent on the “pondering stool” and repairing mistakes that simply couldn’t be overlooked.

The Navigator is a good little boat. PUFFIN weighs in at just over 350 lbs, a bit heavier than the 309 lbs listed in the plans. She is easily trailered, and with a hinged mainmast (see WB No. 237, March/April 2014), I can rig her at the boat launch and get her in the water in 10 minutes or less. Joel Bergen, the man behind the informative Joel’s Navigator Site, has posted a video in which he rigs his Navigator, outfitted with a standard mast, in just under 30 minutes.

The Navigator’s initial stability is excellent for a boat of its size. I am a solid 200 lbs and have no difficulty standing in the boat while it’s afloat and moving through the cockpit for rig and trim adjustments. For a lightweight dinghy, Navigator handles open water gracefully and with an easy movement, and is faster than it looks. It sails wonderfully on a reach or a run; into the wind, it neither points as high nor runs as fast as I would like, but that may be typical of a gaff rig. If you’d like your Navigator to do better to weather, the alternate Bermuda rig with an aluminum foil-sectioned mast would be the better choice. In 15 knots of wind, my Navigator stays remarkably dry and upright and can do 8 knots on a broad reach, even while fully loaded. Without a cargo of four people aboard, she heels more and offers a more thrilling ride, and can certainly reach higher speeds. One advantage of the yawl rig is the ability to sheet the mizzen in hard and drop the main and jib. This allows her to heave-to with her head pointed nicely into the wind while the crew enjoy a break or take in a reef or two on the mainsail.

My plans for PUFFIN include daysailing around the Milwaukee harbors and marinas, inland-lake sailing, camp-cruising the Apostle Islands, and possibly even an attempt at racing in the Everglades Challenge. Welsford’s Navigator is good-looking, well-founded, and perfectly suited to those adventures, either singlehanded or crewed. For boatbuilders aspiring or expert, she represents a doable, enjoyable challenge that will provide years of admiring glances no matter where she sails.

John Florance was raised in Mexico, and as a child learned to sail Hobie Cats on the Bay of Acapulco. He has sailed extensively on Lake Michigan, in Mexico, and the Caribbean. He and his family often vacation in the Caribbean and sail -chartered monohulls among the islands. PUFFIN is his first scratch-built boat. He has posted a video of PUFFIN under sail on his YouTube channel. 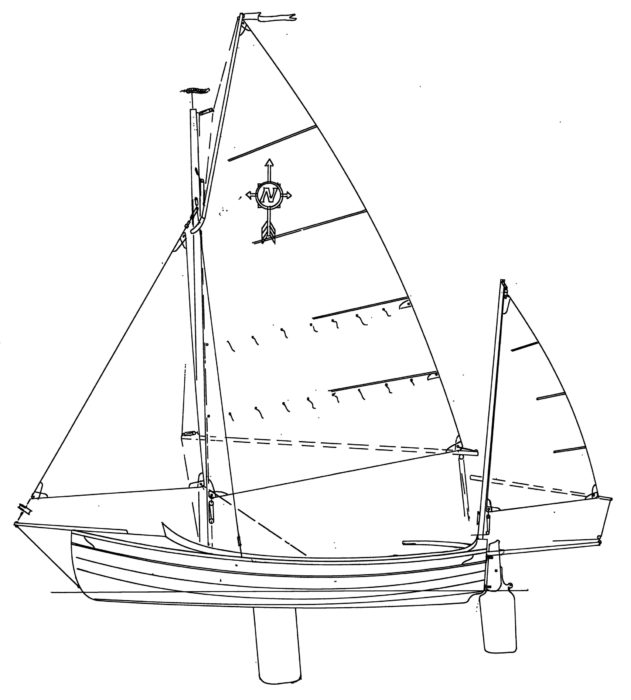 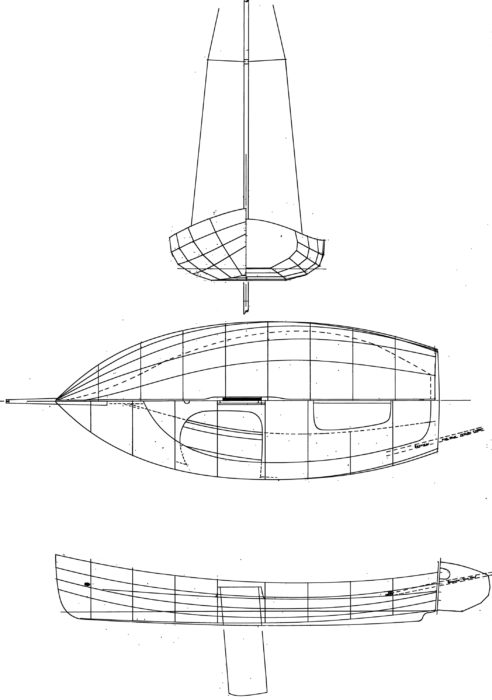 Plans for the Navigator are available from John Welsford and from Duckworks.

As I was working on our review of sound signaling devices in our August 2016 issue, I took a look on the web for homemade foghorns. I found quite a number...

Brian Megaw, a river guide on New Zealand’s North Island, thought there must be a better way to run the Whanganui River. On this historic river that meanders through the…

Daniel Beard, in The American Boy’s Handy Book, wrote, “At least one or two good sharp hatchets should form a part of the equipment of every camp; it is astonishing,…