Pete Markantes and his son Jason built DAWN PATROL for hunting, crabbing, and fishing in the waters of the Pacific Northwest. Their Honker is one of Sam Devlin’s suite of small, hunting-oriented outboard-motor boats. Its broad cockpit and stable garvey-style hull make for a workhorse of a boat, and its straightforward construction allows novice boatbuilders to create a functional, adaptable craft that can accommodate a group of fishers or hunters.

When I asked Pete, “Why not just get an aluminum jet sled, like everyone else?”, he smiled. “It’s the customization.” A home-built boat is not at all like a factory-made model, where buyer is stuck with features decided upon by the manufacturer. Even as they were building the boat, Jason put a lot of thought into outfitting it. “I just stared at it in the garage. What if we put a second depthfinder over there, and a rod holder there…?”

The Honker plans call for an 18′3″ hull, with a beam of 7′ and a capacity of 1,580 lbs. The drawings are detailed enough to enable assembling a seaworthy boat and yet leave plenty of flexibility for options to suit the builder’s needs. Pete opted to stretch the hull to 20′, which provided an extra 2′ of cockpit length over the stock design, allowing DAWN PATROL to carry two small layout boats, each capable of carrying and concealing single duck hunter. The chines and sheer run straight and parallel from about amidships aft, so for builders wishing to lengthen the Honker, Devlin notes that “the hull lines on the panels are very easy to extend, and we have had fully half of the boats built as the longer version, by simply adding onto the aft ends of the side and bottom panels.” He also recommends cold-molding an additional 1/4″ layer of plywood onto the bottom of the boat to make it stiffer and stronger for heavy-duty use.

The open cockpit easily seats four adults and their gear. The 14″-wide side decks make a useful spot to perch while under way, fishing, or hauling in a crab trap. The width of the decks and straightforward plywood construction supporting them provided the structure for the Markantes to add small shelves and trays for hunting and fishing gear.

The plans call for Devlin’s stitch-and-glue method, which consists of temporarily joining plywood pieces together with wire, then bonding them together permanently with epoxy and fiberglass. All exposed wood is coated with epoxy to protect it from the elements. The hull, deck, and cockpit sole are made of 1/2″ okoume marine plywood. The plans don’t recommend a specific paint treatment, but Pete found that two coats of Kirby’s flat marine alkyd enamel has proved durable. Pete had previously built two other boats, so he had the skills and the tools to build the Honker in about 350 hours, which is close to the designer’s estimate of 320 hours.

Pete initially powered the Honker with a Yamaha F115 four-stroke outboard, which can readily switch between prop and pump propulsion by changing the lower unit, but at 377 lbs it proved too heavy, resulting in poor trim and uneven performance at speed. He replaced it with a Yamaha F60 four-stroke outboard at 249 lbs, which gave the Honker better balance and as much power as it can comfortably take. Devlin recommends a 70-hp motor, but 10 years ago, when DAWN PATROL was constructed, the F60 was the best choice—its weight was the equivalent of today’s 70-hp outboards. An electric-start, power-tilt Yamaha T8 is used for trolling and alternate power. Pete’s Honker cruises at about 22 to 25 mph even when it is fully loaded with gear and four adults.

The fuel economy is excellent, Pete reports, noting that only about 4 to 6 gallons of fuel are consumed “after a full day of fishing, which consists of 2 hours of running on plane with the F60 and 4 to 6 hours of trolling with the T8.” The fuel tank location is not specified in the plans, but based on previous experience Pete chose a custom-made 21-gallon fuel tank, which he installed permanently under the fore deck. The location of the tank and weight of the fuel help to balance the boat for improved performance, compared with storing gas in portable tanks in the rear. The fuel lines are run under the side decks, instead of the bilge, making it easy to check for leaks and to conduct maintenance.

Some Honkers have been constructed with side-console steering, but the boat is intended to be steered by the outboard’s tiller. The helmsman can stand or sit on the aft bulkhead or a folding chair set in the cockpit. Standing provides the best field of view. Pete is 5′8″, and when he’s seated in a folding chair the view over the bow is acceptable at modest speeds, and slightly better when he’s seated on the aft deck. I’m 6′1″, and I found sitting on the deck and standing to be equally good since the bow didn’t rise much into my field of view ahead.

DAWN PATROL is used extensively on the Lower Columbia River, where the influence of tide, river current, and wind can cause challenging conditions. Spray sometimes comes over the bow, but Markantes finds the boat capable of handling wind and waves comfortably. Devlin is confident in the Honker’s seaworthiness close to shore and on open-water and I found that DAWN PATROL was steady and smooth in mild chop and when crossing the wake of other motor boats; no matter how the four passengers were arranged, the trim felt even. The boat goes from a standstill to plane in about five seconds.

Pete customized the boat with an electric system based on a 12V absorbed-glass-mat (AGM) battery. He installed tachometers and digital run-time counters for each motor, as well as running lights, power outlets, GPS, depthfinders for both the skipper and guests, LED lighting under the gunwales, and a removable LED spotlight on the foredeck.

In accordance with Coast Guard guidelines, DAWN PATROL was equipped with flotation. Markantes diverged from Devlin’s recommendation—solid foam with air space around it to prevent rot—choosing instead a combination of solid and two-part foam poured into three separate, enclosed compartments, one located at the bow, and two on either end of the stern.

Devlin offers a removable plywood pilothouse option for the Honker. It provides standing head room aft, from which one could steer with a side-console setup, as well as a lower area forward that covers approximately half of the cockpit. The structure would keep the crew dry in rough water or rain, and could serve as a humble cabin for an overnighter. To avoid taking up valuable cockpit space, Pete decided against the cabin and created instead a custom-made blind covered with artificial grass that allows the boat to transform from fishing vessel to camouflaged hunting craft in about half an hour. “With all this cockpit space, we can have three or four people hunting at once,” he told me.

DAWN PATROL illustrates just one variation that can be created using the Honker form as foundation. The plans are detailed enough to produce a solid boat that is highly customizable to suit intended use. Based on a classic and simple form, the Honker is a really practical boat, capable of adventuring in big water, yet with a shallow enough draft to ply backwaters, or even land on a beach. For its size, the Honker has a lot to offer.

Bruce Bateau sails and rows traditional boats with a modern twist in Portland, Oregon. His stories and adventures can be found at his web site, Terrapin Tales. 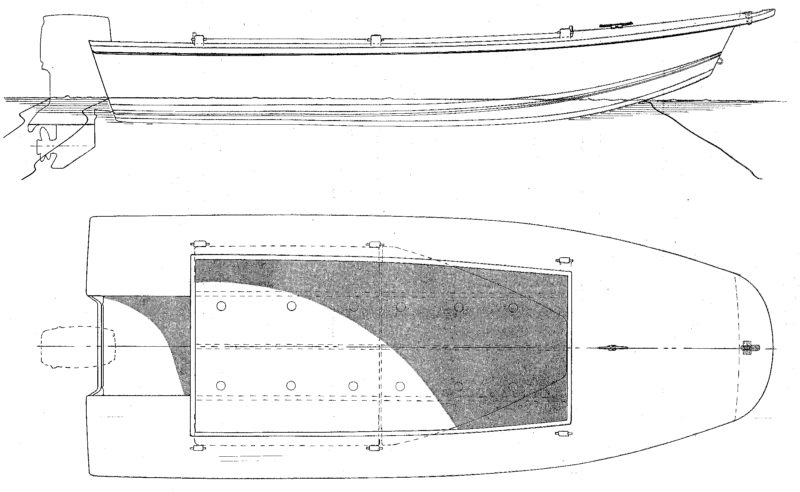 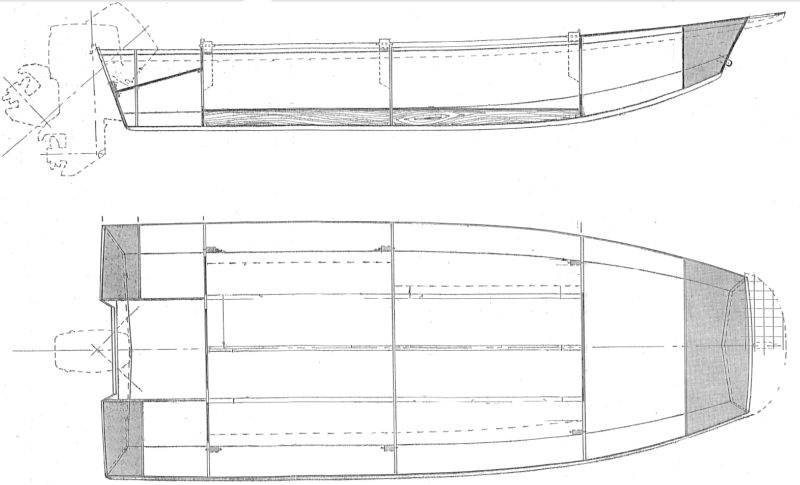 Plans for the Honker are available from Devlin Designing Boat Builders.

As I was working on our review of sound signaling devices in our August 2016 issue, I took a look on the web for homemade foghorns. I found quite a number...

Brian Megaw, a river guide on New Zealand’s North Island, thought there must be a better way to run the Whanganui River. On this historic river that meanders through the…

Daniel Beard, in The American Boy’s Handy Book, wrote, “At least one or two good sharp hatchets should form a part of the equipment of every camp; it is astonishing,…