A beach catamaran, a micro cruiser

James Wharram’s Polynesian catamaran designs have inspired countless backyard boatbuilders with dreams of ocean voyaging to exotic tropical destinations. Starting with the simple 23’ TANGAROA, aboard which he completed the first catamaran crossing of the Atlantic in 1955–56, the cruising-sized vessels in his range of plans have an impressive safety record due to their conservative design parameters. Seaworthiness is the number-one priority in his designs.

While ocean-voyaging catamarans have been the main focus of Wharram’s design work, his plans catalog includes a few smaller boats suitable beach cruising. The Tiki 21 that was recently profiled here in Small Boats Monthly crosses the line between the two pursuits but is still a bigger boat than many people want to build or trailer. The Hitia 17 and the Hitia 14 are based on the same hull shape and design concepts as the Tiki 21 and her larger sisters, but the Hitias are open boats. They are lighter, simpler, and less expensive to build, while retaining the sailing characteristics and performance of the cruisers. While the smaller Hitia 14 is strictly a daysailer, the Hitia 17, with its dry-storage holds and kayak-style cockpits, features real camp-cruising capability for sailors who don’t mind roughing it a bit. 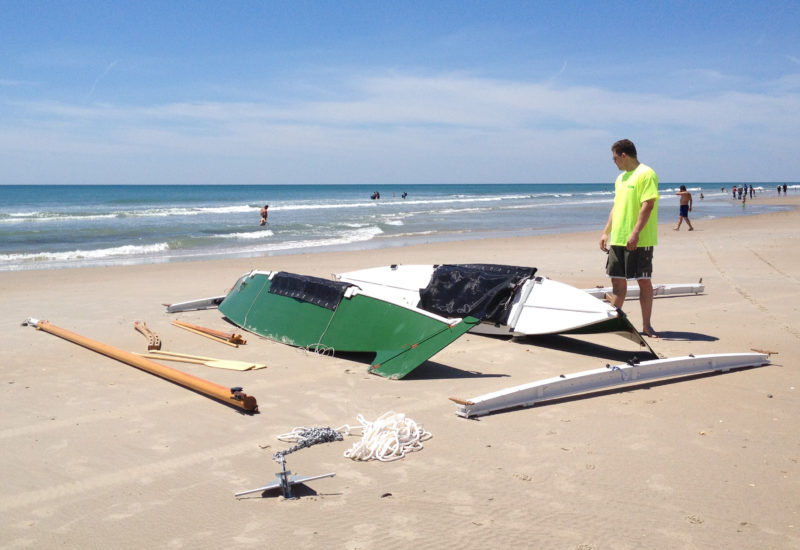 Taken apart for transport, the pieces of the Hitia 17 are light enough to be carried to the beach.

In 1997, I chose the Hitia 17 as my first sailboat build. After many years of sea kayaking and building various kayaks and canoes, I wanted to sail to the same kinds of places I could paddle craft, but I wanted to carry more stuff, and make occasional open-water crossings at faster speeds. The Hitia 17 fit the bill, and the double-canoe design appealed to my prior experiences with seaworthy small boats. It draws only 12″, is easily beachable, and could accommodate a companion or two. It offers the possibility of camping aboard if necessary—a real plus in places like Florida’s mangrove swamps where there are no campsites.

Like all Wharram catamarans, the Hitia 17 is designed for plywood construction, and the assembly method is straightforward stitch-and-glue with epoxy-fillets, taped joints, and fiberglass sheathing. The project calls for eight sheets of 1/4″ plywood and one sheet of 5/8″, as well as some straight-grained fir or spruce lumber for stringers, crossbeam parts, and mast laminates. 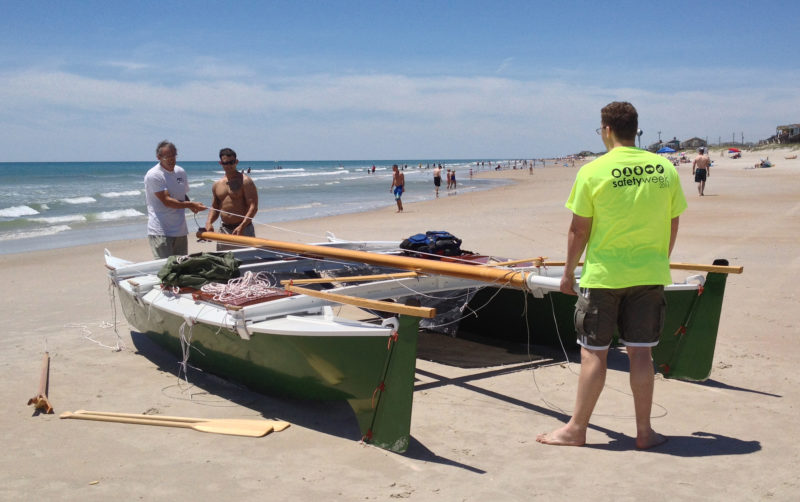 The two hulls and three crossbeams are assembled with lashings instead of hardware. With experience, the assembly time can be cut down to under an hour.

Building the Hitia 17 doesn’t require an large shop, because each hull is only 2′ wide and weighs about 90 lbs. They can be built one at a time under a minimal shelter, on one side of a garage, or, as some builders have done, even inside an apartment or house, as the hulls are slim enough to fit through standard doors, and everything can be moved outdoors and assembled in the back yard. The design book states that the build will take about 250 hours, but most builders take a bit longer if they’re shy on experience and tools or if they simply want better-than-average craftsmanship and finish. I built my Hitia 17 over the course of about seven months of spare-time work, and the result was everything I’d hoped for.

As with the larger Wharram cats, the components and rig of the Hitia 17 are designed to eliminate the need to purchase a lot of expensive marine hardware. The hulls are connected to the three crossbeams with low-stretch rope lashings, and the rudders are laced to the sterns with rope hinges that are both elegant and effective. The tillers lock onto the rudderposts with no metal hardware, and the mast is secured into its step with a wooden key built onto middle crossbeam Even chainplates and mast tangs are unnecessary, as the shrouds and stays are tensioned with lanyards anchored to flat wooden cleats at the sheer at one end and looped over hounds at the masthead on the other. 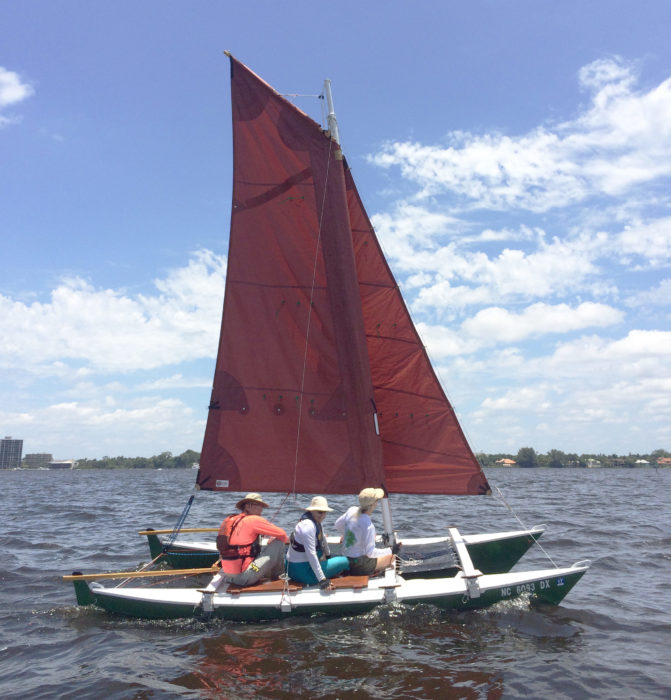 This Hitia 17 carries Wharram’s gaff wingsail main, with a luff sleeve for better airflow around the mast.

When I built my Hitia 17, the sail plan differed from that of the Tiki designs in that it had a sprit rather than the short gaff rig of the standard Wharram wingsail. The sprit has the advantage of simplicity—one less halyard to bother with—and the sail can be brailed around the mast with the sprit in place, but in strong winds, the sprit has to be taken down. It tends to get in the way because it is as long as the boat. Now the Hitia 17 plans include the option for the gaff wingsail, and having sailed the larger Tikis with that rig, I would recommend it as it is easier to reef and offers more adjustment to the shape of the main.

There is no mention of an auxiliary outboard in the building plans, and it’s certainly not necessary, as the boat can be paddled, but I added a motor mount on the aft beam and fitted a 3-hp Evinrude that often came in handy during extended periods of calm on the Gulf of Mexico. The cost of building my own Hitia 17, including the sails, outboard, and a new trailer I modified for it, came in at just under $6,000, which seemed very reasonable for such a capable catamaran.

Unlike the larger Tiki 21 and Tiki 26, the Hitia 17 doesn’t require an elaborate folding trailer, but unlike many beach cats of similar length, it is too beamy at 10’11” to transport fully assembled. Wharram was uncompromising in keeping to the overall beam-to-length ratio of his proven ocean voyagers, and wouldn’t reduce the beam to 8’6”, the maximum width allowed for trailering. But since the hulls are light enough for two people to easily carry or one person to maneuver around with a two-wheeled cart, almost any trailer can carry separated hulls to the water. They could even be cartopped, although with the beams and mast to carry as well, it would require a large and quite substantial rack capable of handling a 300-lb load.

I went to a little more trouble than necessary when fitting out my trailer, because I wanted to be able to assemble and launch the boat fully loaded boat by myself in one go. To accomplish this, I made two removable beams fitted with cradles to hold the hulls at sailing width. Upon arrival at the boat ramp, I secure these in place and then lift the hulls, one end at a time, into the cradles and then lash on the crossbeams and step the mast. With practice, I got my launching time down to just over half an hour. 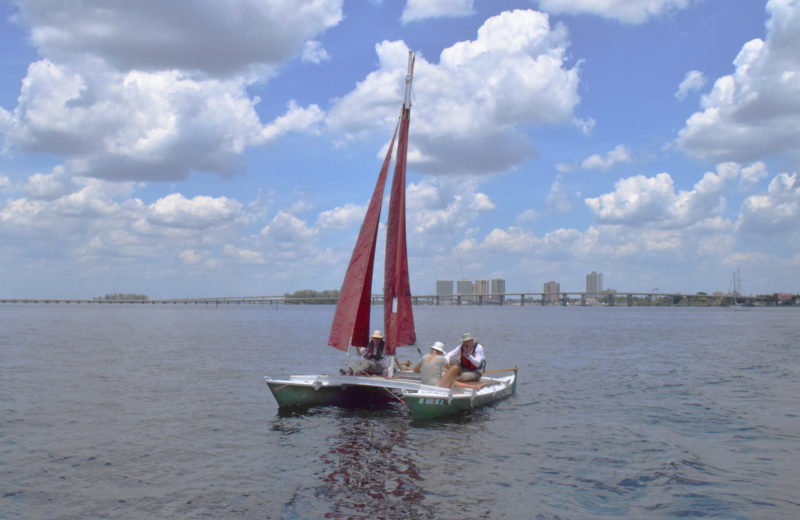 The mast rests on a crossbeam and is supported by a single shroud to each side.

The Hitia 17 is a forgiving catamaran to sail compared to most beach cats of similar length. With its generous beam and just 160 sq ft of sail area, it is a stable platform that can handle a wide variety of conditions. That’s not to say that it won’t capsize with carelessness, but it is far less likely to than the typical, more racing-oriented catamarans in that size range. Even with its conservative sail plan and relatively low rig, the Hitia 17 is still quite capable of exciting performance in the right conditions. I often clock over 10 knots, even with the hulls weighed down with camping gear. Tacking and jibing are reliable and effortless, and windward ability is certainly acceptable for a multihull designed for cruising rather than racing.

The absence of daggerboards, centerboards, or leeboards somewhat limits the Hitia’s pointing ability, but is a great asset for exploring thin water that most sailboats can’t reach. Drawing only 12”, the deep-V hulls can be sailed right up onto the beach, then easily pushed back off again. On sandy beaches I could even sail in through a moderate surf break and land, just as I did in my kayaks. The rudders and the integral skegs are no deeper than the keels, making it safe to let the boat dry out at low tide. Owners who plan to beach the boat on a regular basis can easily add Kevlar strips or other reinforcements along the keels. 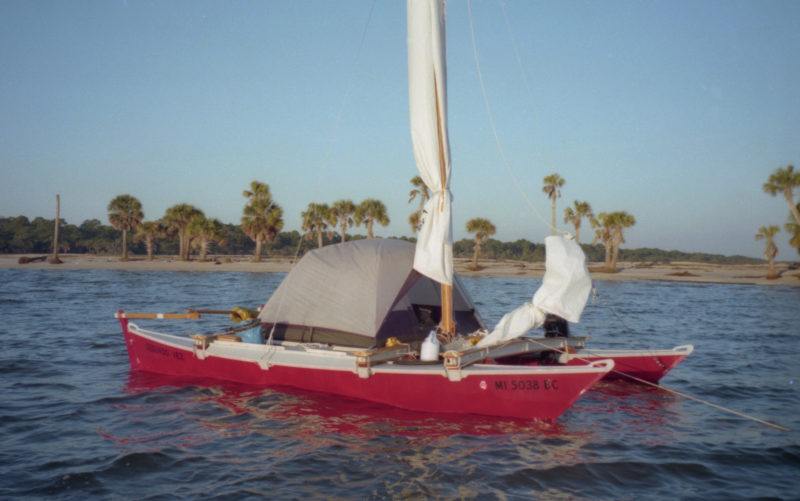 The area between the aft and middle crossbeam is large enough to accommodate a backpacking tent for overnights at anchor. On a trip to St. Vincent Island in Appalachicola Bay, the author camped on the deck and use the front trampoline for a porch, a galley, and storage.

I did several multi-day camp-cruising trips with the Hitia 17 to various barrier islands off the coasts of Florida and Mississippi. The little catamaran performed well whether I was sailing solo or with a companion. I frequently anchored out and pitched a small backpacking tent on the trampoline between the hulls, an arrangement that worked well in calm conditions. There is, however, little room to move about with the tent taking up most of the deck space, so I sometimes found it easier to camp ashore, especially when I had a companion with me.

The flaring deep-V hulls give all Wharram catamarans excellent load-carrying capability for their size, and the Hitia 17 is no exception. Each hull has watertight bulkheads that segment the hull into four dry-storage compartments. Forward of the mast crossbeam, each hull has a large hold accessed through waterproof deck hatches. The plans suggest to either make wooden hatches and coamings or to purchase rubber kayak hatches. I bought a pair of large oval VCP kayak hatches for my own boat, as the foredecks can take a lot of water and spray in rough conditions. In the ’midships section between the beams, each hull has a compartment, accessible through two large hatches, to sit in kayak-style, or to use as foot wells when seated on deck. Spaces beneath these compartments offer extra dry storage for smaller items that will fit through 6” deck plates. Even when loaded with equipment and supplies for a crew of two for several days, there is room to stow lightweight, compact gear securely belowdecks.

All of these features with the ease and low cost of building your own make the Wharram Hitia 17 an attractive package for adventurous sailors wanting to do some extended coastal exploring on a safe and comfortable multihull platform.

Scott B. Williams began his small-boat adventures exploring the creeks and barrier islands by canoe and kayak in his home state of Mississippi. His fascination with the potential of these simple boats led him to longer solo journeys in the Caribbean and down the Mississippi River, which he first wrote about in the pages of Sea Kayaker magazine in the early 1990s. Combining a passion for woodworking with his interest in boats led him into wooden boatbuilding and yacht carpentry while he continued writing about his adventures. He has since written 22 books (and counting), many of them survival and adventure novels which draw on his paddling, boatbuilding, and sailing experiences. Scott can be contacted through his website. 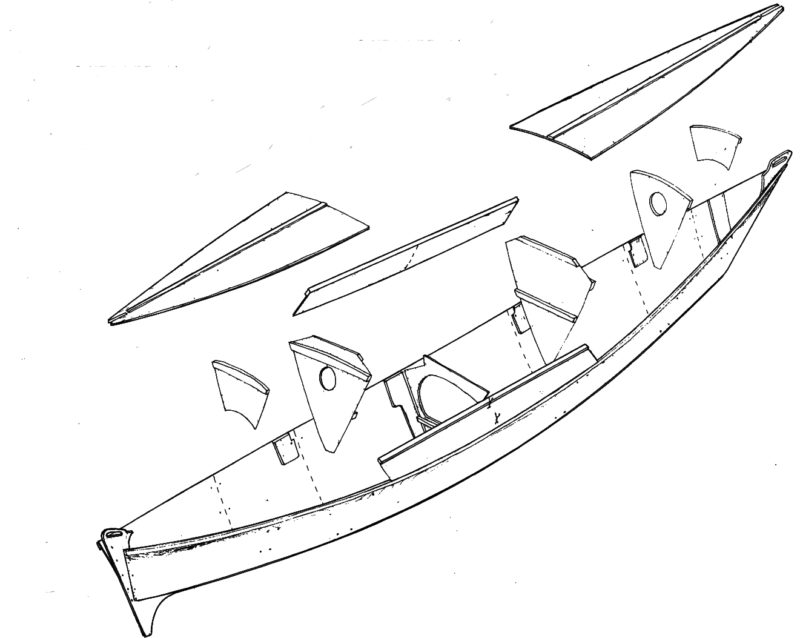 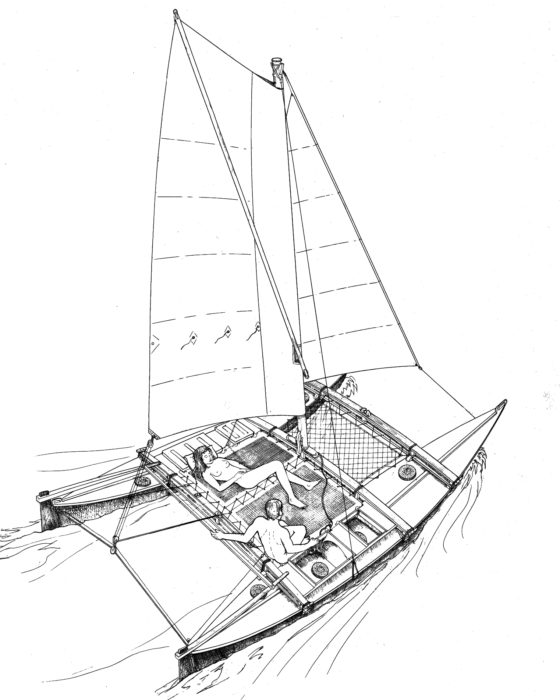 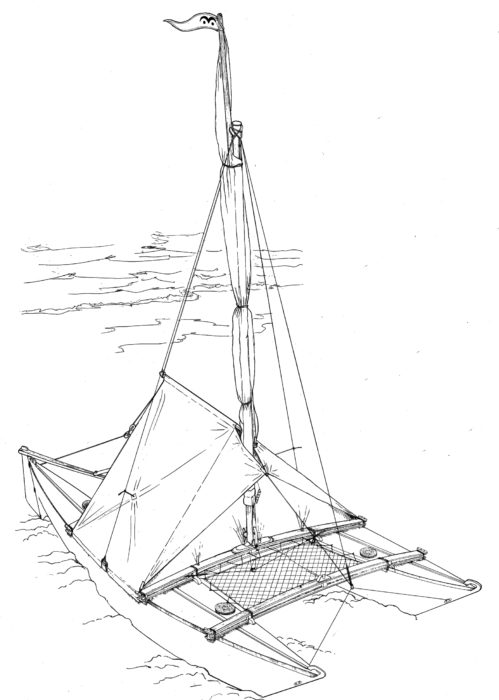