James Wharram is a multihull pioneer who has been sailing and designing exceptionally seaworthy catamarans since the 1950s. For his first voyage, he built, TANGAROA, a 23’ catamaran and sailed her from the U.K. to the Caribbean with Jutta Schulze-Rhonhof and Ruth Merseburger, both from Germany. While in the Caribbean he became a father, and the boat mothered a growing colony of teredo worms. With a strong desire to sail home, Wharram built a 40-footer and did the first North Atlantic crossing by catamaran. His designs are based on firsthand experience, regularly updated and improved, and have a safety record that is hard to beat.

I built his Tiki 21, which is designed as an easily built, trailerable coastal cruiser for adventurous folks who don’t mind bearing a small amount of discomfort to be rewarded with a boat which is in harmony with the sea. The plans are highly detailed and provide illustrations for almost every step of the process. The plans include a materials list, down to the last fitting, and an epoxy technique manual depicting everything from laminating to fairing. The plans call for 18 sheets of 1/4″ marine plywood and one sheet of 3/4″. My Tiki 21, BETO, took around 10 or 12 gallons of epoxy and a good helping of mahogany and Douglas-fir.

The hulls are built using the stitch-and-glue method, making it a fairly quick build, even for the first-time builder, though practicing with some scraps of plywood and epoxy is recommended for beginners.

Construction starts with forming the hull panels and stitching them together, then moves on to installing bulkheads and bunks and fitting the decks and cabintops. After the hulls are complete, just three beams, two tillers and rudders, and a wooden mast remain as the last major projects. For BETO, I chose an aluminum mast—a 22′ length of 4″ aluminum tubing with a 1/8″ wall thickness, as recommended in the plans. I chose aluminum over wood in hopes of a lighter mast that would require less maintenance and be easier to raise when rigging.

The Tiki 21’s most controversial feature is, perhaps, the use of lashings, rather than conventional marine hardware, to hold the amas and akas (hulls and cross beams) together. Wharram believes that the lashings allow for shock absorption and decrease shock loads at the joints. Each wrap of the five loops has a 2,800-lb breaking strength. The lashings are frapped so tightly that small movements between structural members are unnoticeable. The lashing system is proven by both Wharram cats and the well-traveled Polynesian voyaging canoes of the Pacific.

The Tiki 21 was designed to be assembled on a beach at low tide and to float away when the sea returns. It has a 14″ draft, and each hull weighs in right under 200 lbs when completed. For our negligible tidal range and for freshwater sailing, I chose to build a trailer with telescoping sides that allow the hulls to be expanded outward for boat assembly before being backed down the ramp. We currently sail BETO on a small lake, so it rests on the trailer between outings.

When we want a taste of salt water, we unlash the beams and slide the hulls together for a package that is a little wider than my small Toyota truck. I can assemble the boat by myself in two hours and disassemble it in an hour. This is pretty fast to be on the water, and a helper could easily bring this time down as the lashings and frappings are the most time-consuming tasks. Some Tiki sailors have had good luck with ratchet straps and nylon webbing when trailering to daysail. I wouldn’t recommend ratchets in lieu of lashings for venturing offshore, however.

So how does the Tiki 21 sail? I’m a former racing catamaran sailor whose friends all sail go-fast boats, and I think it sails like a dream! The rig is a Wharram “Wing” sail that keeps the center of gravity low and the power high. The sail is modeled after a high-aspect Dutch gaff rig, using a short gaff at the peak and an elongated luff pocket that envelops the mast and minimizes turbulent airflow. This unique arrangement offers performance similar to modern rotating masts and square-top mainsails without all of the moving parts.

Unlike older Wharram designs, the Tiki 21 has a power-to-weight ratio that can get one in trouble if the wind pipes up. In light air, however, it is slightly undercanvased, and a drifter works wonders. The deep-V hulls have hardly any noticeable leeway if sails are trimmed correctly, and can tack in light and heavy air even sailing just the main.

The rudders are lashed to the sternposts and skegs and do not extend below beneath them, so the Tiki can’t turn on a dime in tight quarters. However, when sailing, it tracks like it is on rails. I sail upwind all the time in up to 20 knots with just a bungee crossed over the tiller. The Tiki is superbly well balanced and will sail along happily with proper trim. To windward we have seen 7 knots with the wind at 50 degrees true, falling down to around 5 knots at 40 degrees true. Off the wind, BETO has clocked 15 knots while power-reaching with no noticeable lifting of the windward hull (check my video). For normal cruising, we reef the main and jib in 15 knots to keep dry on deck and fully in control while still making 8 to 10 knots on a reach. For sails, we carry a main with three reefs, a jib with one reef, a nylon drifter, an asymmetric spinnaker, and a storm jib. I have an outboard, but I learned to sail on a 22’ engineless racing sloop, so I have plenty of patience when the wind dies, preferring not to deal with a nasty outboard and volatile gasoline. Using a stand-up paddle, I can move the Tiki all day at 3 knots in flat water, and with a second paddler it’s even faster.

For coastal cruising on a small catamaran, one can really not find a better-suited vessel than the Tiki 21. The accommodations inside each hull provide a 12′-long bunk that is 2′ wide; the hulls span 3-1/2′ at the sheer. Our sleeping accommodations are often a two-person tent set on deck, or my girlfriend and I can get cuddly and sleep in one hull if needed. All of the bunks are above the waterline, and under them are the bilges, which provide loads of storage. The load capacity is listed as 1,000 lbs. The bows and sterns all have watertight flotation chambers. The anchor locker doubles as another flotation chamber. The Tiki 21 has six bulkheads in each small hull, making it a strong little boat. Resting between the akas is a plywood deck measuring 6′ x 7′ that never moves far from level when under sail. For my own preference I built a slatted cedar deck instead of a solid plywood one, and it has since been approved by the Wharram Design team.

Rory McDougall sailed his modified Tiki 21, COOKING FAT, around the world in the early 1990s, and until just recently he held the record for sailing the smallest catamaran in a circumnavigation. He experienced gales pushing waves up to 30′, and his boat suffered little damage. In 2010, McDougall sailed in the Jester Challenge, a single-handed transatlantic race for boats between 20′ and 30′, and came in second after 34 days under way, just a few hours after a larger monohull. When in storms, McDougall goes on his sea anchor and reports that the Tiki rides very happily and calmly. In his first gale on sea anchor, he even felt so relaxed that he tied a jibsheet around himself and jumped overboard to swim the swells!

The stories of COOKING FAT’s performance convinced me that a Tiki 21 would easily manage any conditions I’d be likely to encounter. If you’re looking for a small and easily managed coastal cruising catamaran to build, then I couldn’t recommend the Tiki 21 highly enough. In fact, it is my favorite boat I have ever sailed. For an adventurous couple with goals of gunkholing and cruising the coast, this vessel is simply what dreams are made of. The estimated building time is around 400 hours. I spread my time over about a year and a half and spent roughly $10,000. For my time and effort I got an outrageously capable, fast, safe, and well-mannered cruiser and daysailer.

Brad Ingram lives in Birmingham, Alabama, and enjoys sailing, running ultramarathons, and climbing. He spent eight years in 20th Special Forces Group on a small Intelligence team, and he’s now going to nursing school as a civilian. He plans to travel while working as a nurse, making it easy to spend a significant amount of the year traveling in the mountains or at sea. Among all of his recreational pursuits, sailing occupies the lion’s share of his enthusiasm and interest. He mostly enjoys small boat cruises and small, raid-type multihulls. He has a passion for simple, traditional vessels and enjoys sailing sport boats as well. 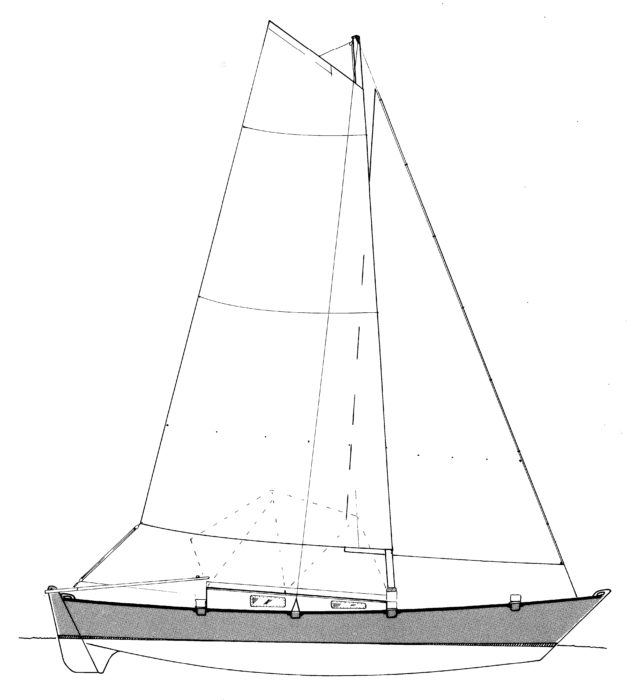 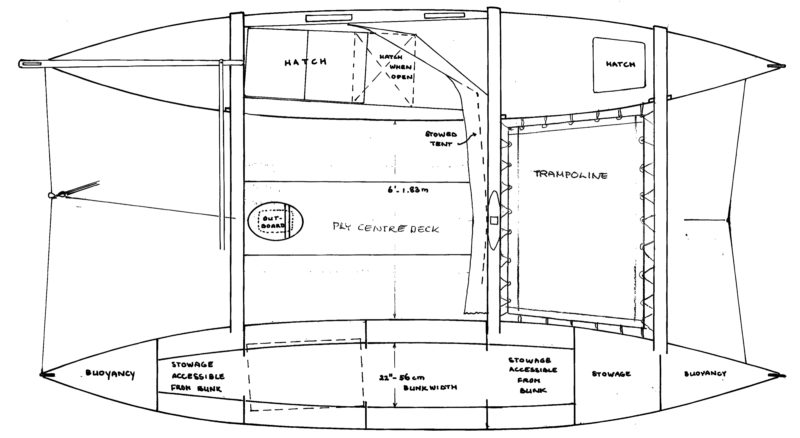 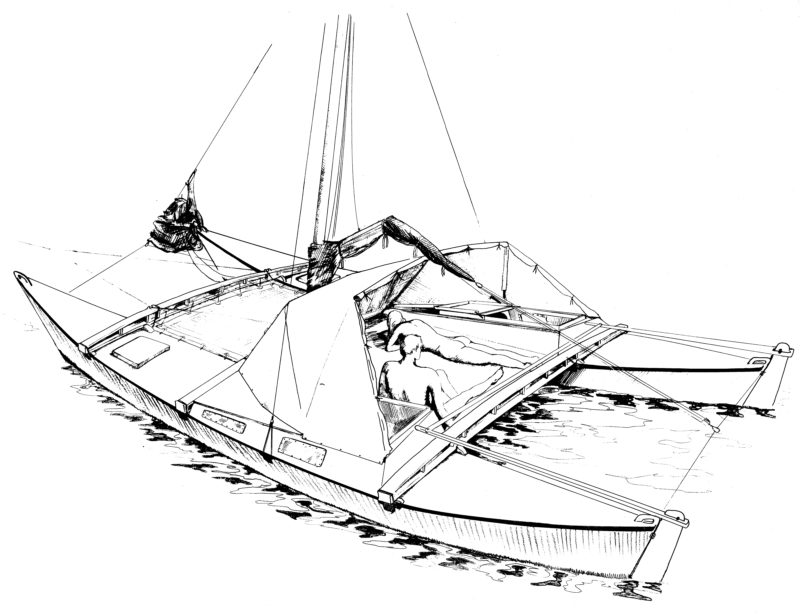 The boat was a Herreshoff Amphi-craft, designed in 1935 by Sidney Herreshoff, Captain Nat’s eldest son. Dad had always been enamored of wooden boats. He grew up in Lowell, Massachusetts,…

From the Channel to the Med

When my husband Mat and I set off from Sidmouth, England, our destination was the Mediterranean, roughly 870 miles (1,400km) south. We planned to reach it through the inland waterways…

With these requirements in mind we found our way to Flexpoxy, a thickened epoxy that comes in a 250mL, two-part cartridge that fits a standard caulk gun. Flexpoxy comes out…

The postwar market of the 1950s saw a boom in the market for home-built boats. With such a high demand for construction plans, naval architect Glen L. Witt founded his…