Harlan and Anna Hubbard: Life after Shantyboat - Small Boats Magazine
From The Editor 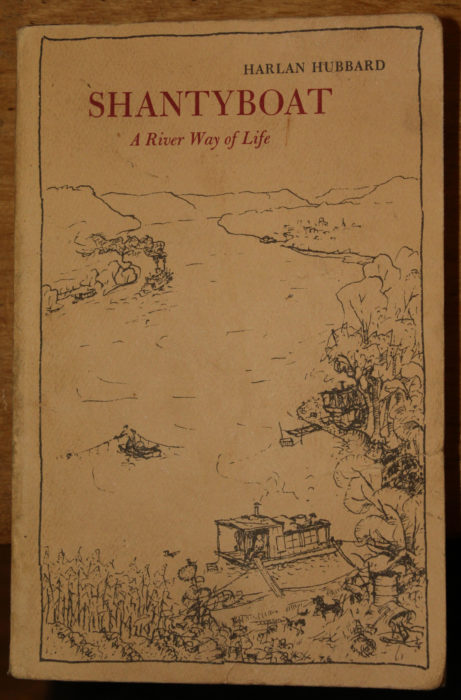 When I was planning for my rowing trip down the Ohio and Mississippi rivers in the early 1980s, I read as many books as I could find on traveling those waterways in small boats. Four Months in a Sneak Box by Nathaniel Bishop was my main guide, as it was his trip that I was going to duplicate. I also read Mississippi Solo by Eddy Harris and Old Glory by Jonathan Raban, both good reads, but Shantyboat: A River Way of Life by Harlan Hubbard was my favorite and most inspiring.

In 1944 Harlan and his wife Anna built a shantyboat near Brent, a cluster of houses along a road paralleling the Ohio River just upstream from Cincinnati, Ohio. They stayed there on the banks of the river for two years, living on what they could grow in their garden or catch in the river, and left Brent on the high waters of November 1946. They stopped for the summer in Payne Hollow, about 120 miles downstream, and stayed there for the summer of 1947 before moving on. They reached New Orleans in 1950 and stayed another year in the Louisiana bayous before returning by car to Payne Hollow in 1952. They settled there, building a house and a life for themselves.

Harlan’s account of the river journey did much more than help prepare me with the details of what I might encounter on my rowing trip; it described an independent and idyllic life:

“The season for syrup making did not last long. We continued our sugar camp for nine days, boiling down washboilerfuls of sap. It was a joy to be working in the winter woods, above the river, building huge fires. I would roll some logs and big chunks of hardwood on the last trip before bed time. Then I walked back to the boat through the dark, starry woods by a path well known. Our dinner was often shad broiled over the coals and potatoes and corn dodgers baked in the ashes. The new syrup was delicious with the hot bread.”

The book played a significant part in my decision to live in a number of cabins in the woods, usually without power, plumbing, or phone.

When I was on my way rowing down the Ohio in the winter of 1985, I stopped in Brent. From my journal:

It turned cold last night, about 25 degrees at my camp in an open shanty at Shady Grove. I slept with my clothes on and managed to sleep well enough. Getting up this morning, though, was painful. My whole body ached with cold, my hands stung. The river had dropped about three feet overnight so I had to drag my boat down the bank to the water of Nine Mile Creek.

I was on the water by 7:30 rowing hard to warm up. As the sun was coming up behind a bank of high clouds to the east there was clear sky overhead and a thin vapor on the water. Vortices in the breeze spun columns of mist ten feet in the air and carried them across the river, undulating like a tall wobbling stack of dishes. Six miles into the morning the sun breached the clouds. I ferried across to the Kentucky side to Pleasant Run. Somewhere on this bank, now all covered with trees, Harlan Hubbard built his shantyboat.

Though it was still pretty early, I put ashore at a ramp leading through a tunnel under the railroad tracks. There were two old houses there in what must be the town of Brent. No one was up at the first house I knocked at. There was a light on at the second. I rang the bell and knocked. An old lady came to the door. Age was what I was looking for, since the Hubbards were there 20 or 30 years ago. The woman remembered him but didn’t know him. She said that there had been an article about him and his paintings in the Cincinnati newspaper last week. She said the Hubbards are down at some place, some hollow, and that they raise a lot of their food down there.

I got about all I could from the woman, a Willis, one of the families that Hubbard mentioned in his book. As I was walking back to the boat I remembered that it was Payne Hollow where the Hubbards spent a season on their drift downriver. I looked through my charts and found two hollows where they might be. I was 105 miles from them. I got quite excited. The Hubbards were still alive, still living on the river, and two days away. I am full of excitement that I might get to meet the Hubbards.

When I reached Payne Hollow I rowed ashore and ran into a sharp rock hiding just below the surface of the muddy river water. I pulled the sneakbox alongside the Hubbard’s aluminum johnboat and took a look at the damage. The rock had carved a deep gouge in the bottom of my boat and I’d have to dry it out and make a repair before moving on. I walked up into the hollow where the Hubbard’s home sat high on the left bank. I found Harlan and Anna there and introduced myself. I said that I had just come to meet them and then be on my way, but I’d damaged my boat and asked if I could stay while I made a repair. I would have been quite happy setting up camp by the river, but they insisted I spend the night in their home.

Harlan was 85, quite lean and square shouldered. Anna was 83 and wore her long silver hair pinned up. Both of them were soft-spoken and had a very serene air about them; they were somewhat formal, especially Anna, though warm and welcoming.

I returned to the river, emptied my gear into the johnboat, and propped the sneakbox up on edge to let the sun dry the gash in the cedar hull. Harlan had another visitor that day, a man who worked at a museum or an art gallery, and I tagged along as Harlan walked us to his studio a few yards from the house to show the man his latest work. I had always admired the woodcuts and the pen-and-ink drawings that illustrated Shantyboat; Harlan had been doing paintings, mostly local landscapes in oils on Masonite boards. His studio doubled as his workshop and contained a fascinating collection of beautiful paintings and hand tools gleaming with a patina of long service.

I returned to my boat later that afternoon, cut away the torn fiberglass and wood fibers, and applied a ’glass-and-epoxy patch. There was just enough daylight left to cure the epoxy as the sun settled over the woods on the opposite side of the river.

Some of my memories have faded, but I think I sat down with the Hubbards to a dinner of homemade soup that evening. The table shared the living room with Anna’s grand piano. (Harlan’s instrument was a violin.) Their bed was stored out of the way to one side of the stone fireplace Harlan had made. When it was time to turn in I was given a bed on the uphill side of the house. On the walls around it, many of the household items Harlan had made were hung from pegs and nails. There was a popcorn popper made of screen and stout wire with a wooden handle. The room I was in was up a step but not separated by walls from the living room where Anna and Harlan would sleep. I could see Harlan’s side of the bed and the gleam of his smooth white hair was the last thing I saw before he extinguished the kerosene lantern. The last words I heard were from Anna: “You get some good rest, dear.”

In the morning I repacked the boat, and returned to the house to say goodbye. Harlan gave me a copy of his book Payne Hollow: Life on the Fringe of Society, with the inscription:

I didn’t take any photographs of the Hubbards, just the photo of the house you see here. I couldn’t imagine asking them to pose for me or to take photos of them surreptitiously. A camera takes away the being in a place, the being with someone, and I didn’t want to give up a moment with them in Payne Hollow. My memories have, of course, faded over the past three decades, and it is likely even what remains with me will fade. The one thing that I won’t forget is the tenderness in their voices as they said goodnight to each other. It gave me a glimpse of what love becomes after a long, full life lived together.

I carried on down river to the Gulf of Mexico. Anna died the following spring; Harlan two years later.

In 1978, when I started building boats, and in the years that followed, my interest was only in boats that I could paddle, row, or sail. I began a series…

Getting Out of Line

When I decided to follow the route Nathaniel Bishop took from Pittsburgh, Pennsylvania, to Cedar Key, Florida, in the winter of 1874–75, I chose not to build a replica of…

I’ve had only four anchorages go wrong (so far). In the middle of a night aboard my dory skiff, I had to sit up in my sleeping bag and row…