It all started during the summer of 2015 when I decided that it was time to part ways with MAGIC, my 1962 Alberg 35′ glass sloop. I had spent four years and countless hours restoring MAGIC to her former glory, but two years after re-launching I needed a change. While she was not a big boat by today’s standards, the amount of time and money spent just keeping the boat in the water and in good condition was exhausting. The fact that I lived in central New Hampshire and kept the boat 150 miles away in southeastern Massachusetts only made things worse.

I found myself spending more and more time on a beat-up old O’Day Daysailer that had been following me around since college. My family and I romped around the local lakes and estuaries, sailing hard and often. The only money I spent on her was gas for the car and beer for the cooler. At some point that summer, I realized that I was having as much fun on the O’Day as I was on MAGIC, but with none of the stress. Sure, MAGIC was a comfortable boat that could take somebody sailing for weeks at a time, but I was mostly going out for day sails with an occasional overnighter. I could be doing the same thing on a much smaller boat.

At about the same time, I heard about the Small Reach Regatta, organized by the Downeast Chapter of the Traditional Small Craft Association in Maine. It’s not a race, but a gathering of small, traditional sailing and rowing craft. I have always been drawn to the look of classic boats and when I saw the boat lineup on the Small Reach Regatta website, I knew I had to check it out.

I showed up on the first morning of the event and was able to sail on Mike Duncan’s FRISKY LADY (a Chamberlin 15′ 6″ gaff sloop) and on Geoff Kerr’s NED LUDD, an Oughtred 19′ 6″ Caledonia yawl. I fell in love with the Caledonia but it was a bigger boat than I needed. However, the seed had been planted, and I spent the rest of the summer researching the perfect small boat in the range of 15′ to 18′.

The boat had to be pretty and, while I prefer the look of lapstrake, there is a lot of additional setup and framing required that takes a fair amount of time, so I was looking for a stitch-and-glue design that didn’t require a strongback and associated framing. I also like the classic look of a balanced lug-rigged yawl; and with unstayed spars, balanced lug rigs are really easy to set up for launching. The mizzen makes for easy handling. In spite of the appeal of classic boats, I wanted a fast boat, and a planing hull makes this possible.

The Apple 16, a five-strake stitch-and-glue balanced lug yawl designed by Thomas Dunderdale of Campion Sail and Design, came closest to being everything I wanted. The classic lines and balanced lug yawl were just what I was looking for and the somewhat flat aft section of the hull allows the boat to get up on a plane. I’m a sucker for a plumb bow, so as soon as I saw pictures of the Apple 16, I knew it was for me.

After several conversations with the designer, I purchased plans and began the build. Thomas was very helpful, answering all of my questions via email or phone.

I didn’t want to wait for a shipment of full-sized printed plans mailed from England; I opted for digital files and took them to a local copy shop and had them enlarged for about $30. I was really happy with the amount of thought and detail that went into the plans; they came with a general construction narrative, a detailed 30-page keyed construction index and at least a dozen schematics for the boat, parts, and interior layout options. For a first-time boat builder, everything provided should be easy to follow.

The included materials list calls for four sheets of 6mm marine plywood scarfed lengthwise for the hull, two sheets of 6mm for bulkheads and interior framing, and one sheet of 9mm for the rudder and additional components.

While Campion does not currently offer files for a CNC mill, someone savvy with a CAD system should be able to digitize the planking measurements and send them off for cutting to save time. I don’t have easy access to a CNC mill, so I opted to plot the strakes on the scarfed panels and cut them out myself. The plans package provides both a table of offsets and a visual diagram for plank measurements that is very intuitive.

Probably the best thing about building a stitch-and-glue boat is how fast you can make visible progress. Once you cut the strakes from the scarfed plywood panels, assembling the hull is a simple matter of drilling out holes for wire or zip ties (I opted for zip ties) and stitching the panels together. In a single, albeit long, afternoon you can go from a pile of flat plywood pieces to a structure that resembles a boat.

Of course, it’s not all a piece of cake. Until you get the bulkheads tied in, the entire structure is a bit of a wobbly mess. I cut cradles to steady and align it while I tied everything together. This helps immensely when one is working alone.

The job of taping the inside and outside seams, followed by a layer of 6-oz ’glass on the outside of the hull is rather monotonous. If you’re careful, cleanup should be a relatively minor job and once complete, you can move on to fitting out the interior.

The plans provide layouts for several interiors ranging from a spartan setup of three thwarts, with two doing double duty as mast partners, to a more extravagant layout with decks fore and aft. I deviated from the plans and designed my own interior with built-in flotation compartments and a center thwart that’s removable for camp-cruising.

I also increased the thickness of the daggerboard from 25mm to 33mm so I could build a NACA 0012 foil. I’ve had several opportunities to test performance against other similar designs with balanced lugs and I believe that the foil helps with upwind performance.

All told, the build took me about eight months of working 10–15 hours per week, and I couldn’t be happier with the way it turned out. A single rower with 9.5’ oars can propel the boat at 3 knots when rowing at a comfortable pace, and her sailing ability has exceeded my expectations. Trailering with my four-cylinder Rav 4 is easy.

I’ve had the boat out for dozens of times in a variety of wind conditions, and the boat is really amazing to sail. Having no prior experience with balanced lug rigs, I spent a lot of time researching balanced lug sail tuning and after a bit of trial and error, I opted to go with 6:1 downhaul and 4:1 mainsheet tackle. I used Dyneema line for the downhaul and main halyard to maximize luff tensioning ability.

With the rigging configuration sorted out and making sure the downhaul tension is drum tight, I found that the pointing ability was quite good. Combined with the foil daggerboard, which should theoretically increase lift, the Apple 16 is not far off the pointing angles that a similarly sized Bermuda-rigged boat can achieve. When soloing, I regularly get up on a plane on a reach and hit 8.5 to 9 knots in less than 15 knots wind. Over 15 knots and I put in a single reef, and have sailed in conditions up to 23 knots without being terrified.

We have had four adults out for a sail, and while it is manageable, two of the crew need to sit in the well on either side of the daggerboard trunk forward of the thwart. The 250-lb boat is really best suited for one or two, and each additional crew member reduces the boat’s ability to plane. I have yet to be able to get the boat on a plane with more than two crew on board; I suspect that it would have to be pretty windy to do so. With that said, the boat sails well even with four on board.

The boat is as well-mannered as a light boat can be and is reasonably dry in most conditions. Beating close-hauled into chop over 2’, predictably, tends to be the wettest point of sail. The yawl rig contributes to a very balanced helm on all points with just enough weather helm on the Norwegian push-pull tiller to take any of the play out of the system and allow you to make subtle course corrections.

The Campion Apple is a well-thought-out small boat that is lively to sail and will turn heads in any harbor. It’s a good choice for a first-time boatbuilder with woodworking skills who doesn’t want to spend years building a boat that looks and sails great.

Matt Bowser, a software engineer living in Canterbury, New Hampshire, can’t remember a time when he wasn’t obsessed with boats. He grew up sailing the coast of New England from Rhode Island to Maine and is enamored with the simplicity, ease, and low maintenance of small boats. When he isn’t sailing, building, or fiddling with various boat bits, he’s mountain biking in the forests of New Hampshire and Vermont or trying to get his teenage children to hang out with him. 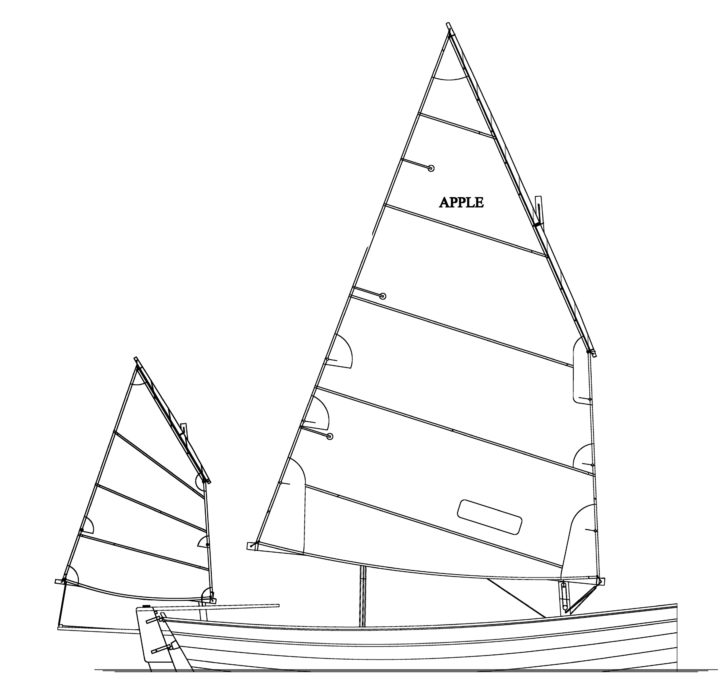