#100 - Small Boats Magazine
From The Editor

On Monday, September 1, 2014, the first issue of Small Boats Monthly was released. That issue’s six articles profiled a sailing outrigger canoe and an outboard skiff, reviewed a flashlight and an anchoring bungee, and featured an Alaskan sail-and-oar cruise and a family-built skiff. The next issue added the Technique feature articles to the mix, and the editorials followed just over a year later. In 2018, we branched out from covering only wooden boats to including aluminum, fiberglass, and inflatable boats. Our Series section began the following year with a video series and Boat Profiles originally published from 2007 to 2013 in the print-only Small Boats annual, which preceded web-based Small Boats Magazine.

There are now more than 900 articles on the Small Boats Magazine website, all of them available to every subscriber, and all of them made possible by our contributors and readers. While those of us who produce Small Boats take pride in reaching this 100-issue milestone, we’re simply one nexus between those who have a passion for small boats and those who wish to offer something about them.

For Nick Grumbles, builder of our Reader Built Boat in this issue, the nexus was the 2019 Port Townsend Wooden Boat Festival. There he met Larry Cheek, a Small Boats contributor and a serial boatbuilder with several boats to his credit. Nick had no experience with rowing and sailing, let alone boatbuilding, but he was eager to learn. Larry had started out in the same way, driven by an inchoate passion for boats and undaunted by a lack of knowledge and experience.

In 1978, when I attended the first of those festivals in Port Townsend, I had already built my first boat, a skin-on-frame kayak that I had designed, and its chief virtue was pointing out how little I knew about boats. At that festival, I attended a presentation given by David Zimmerly about traditional Alaskan kayak construction. I talked to him afterward and he must have sensed the fascination he’d awakened in me and gave me a photocopied draft of his then-unpublished book, Hooper Bay Kayak Construction. It filled me with an appreciation for traditional boatbuilding and was such a clearly written and illustrated guide that I wasted little time in building a Hooper Bay for myself.

While my connection with Zimmerly gave me the benefit of his knowledge, it was John Gardner, known to many as the dean of American small craft, who gave me the encouragement that those new to boats need to keep discouragement at bay through the inevitable challenges that arise. In the late ’70s he was the technical editor for National Fisherman, a tabloid that my father subscribed to. I eagerly read the column Gardner wrote because it often included photos of amateur-built boats. I mailed him prints of my Hooper Bay and the Marblehead skiff I’d built soon after the kayak. He published both in National Fisherman with this in the caption: “Chris has taken to boatbuilding like fish to water.”

Over the more than four decades since then, I’ve moved through the nexus that joins those in the boating community with enthusiasm to those with experience. Wooden boat festivals, tabloids like National Fisherman, magazines like WoodenBoat and the now long-defunct Small Boat Journal, and books by the likes of John Gardner, Howard Chapelle, and Pete Culler have enriched my life and obliged me to return the favor, just as Larry felt compelled to pass on his knowledge to Nick.

Small Boats is meant to serve in the same capacity, a nexus that provides encouragement and experience to anyone with an interest in small boats. With this 100th issue our thanks go out to the contributors and subscribers who have given us a place in this community.

Following the launch of the 100th issue, my son, Nate, presented me with a peanut-butter jar filled with 100 red-cedar Whitehalls he had carved and painted. 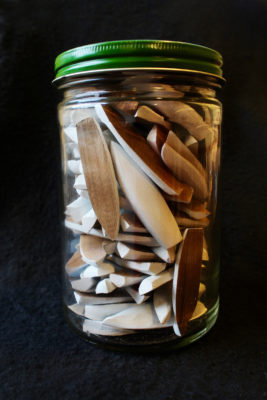