A classic form, strip-built, from Glen-L

In 2011, in anticipation of retiring after a career as a research engineer, I decided I’d build wooden rowing skiff. I wanted a boat with traditional lines—particularly one with a vertical stem and a wineglass transom—and an easily driven hull, so the waterline would have to be longer than 12′. The 17′ Whitehall I found in the catalog of designs from Glen-L was just what I wanted.

I ordered the plans, and the package I received included full-sized patterns for the molds, transom, stem, breasthook, and knees for the transom and thwarts. A table of offsets is provided, but the full-sized patterns make the offsets and lofting unnecessary. The 1/8-scale drawings show the plan and overall profile, keel profile, construction details, and lines.

For transferring the drawings to the wooden stock, I ordered carbon transfer paper from Glen L. I recommend asking Glen-L for rolled drawings, otherwise you’ll receive folded drawings. The creases in the patterns made it difficult for me to obtain precise sectional shapes. The carbon paper came with a good tip: Coat the inside of the station forms with white paint before transferring the section drawings. This way the builder always knows what controls the complex curves of the Whitehall design.

The Whitehall is composed of 120 planking strips bent cold over molds. The instructions suggest the hull can be stripped with hardwoods (Honduras or Philippine mahogany) or softwoods (western red cedar or Sitka spruce). The plans estimate a mahogany Whitehall will weigh about 350 lbs. My boat, STELLA, has a cedar hull with spruce trim and weighs slightly over 200 lbs. A light skiff has many advantages. It can accelerate more quickly, go faster, and be more responsive—all of that adds to the fun. At launch sites it is easy getting the Whitehall on and off the trailer, and two can easily carry it.

The instructions note that the builder can choose to use traditional glues, such as resorcinol or marine epoxy. This is just an indication of the bygone era when the instructions were written. Marine epoxies are today’s obvious choice.

I cut my planking stock from 24′-long 2×14 cedar boards. The strip construction for the Whitehall differs from the method widely used for canoes and kayaks. The strips are thicker and glued together with epoxy rather than carpenter’s glue, giving the hull greater strength, resistance to water, and durability. I put a resaw blade on my bandsaw and made 1/2″ x 3/4″ strips. The Glen-L instructions briefly discuss the option of milling bead-and-cove planking strips. Based on my experience, this is an essential step. Unlike flat-edged strips, the mated beads and coves almost snap into place, aligning themselves and closing the gaps. While you can buy bead-and-cove strips ready-made, the cost of the size of strips required for the Whitehall was prohibitive. I used a shaper to mill 5/16″-radius bead and cove profiles.

The instructions mention the option of covering the completed planked hull with fiberglass cloth; I found additional advice in The Gougeon Brothers on Boat Construction. I applied 4-oz cloth with five coats of epoxy inside and out, resulting in a composite structure with a bending strength that is many times that of the cedar alone and abrasion resistance for trailering and landing on gravel beaches. The Glen-L plans recommend painting the hull, and while marine enamels will do the job, the beauty of the wood is lost. I finished my Whitehall bright, protecting the epoxy with a high-grade marine varnish.

During construction I did some things differently than called for in the plans, but I do not see these changes as fixes for shortcomings in design. I believe the aim was to keep things simple to encourage amateur boatbuilders to take on the project. Here are the refinements I made, none of them essential, and all mean more work.

I chose to do the strip-planking according to what the Gougeon company calls the “Master Plank Method.” It starts with the first strip laid on the midpoint between the sheer and the centerline of most of the molds (running fair across those nearest the bow) and results in a hull with the run and grain of the planks emphasizing the sheerline, which is only important with a bright-finished hull. It looks great, particularly in the bow and stern areas.

The planking strips near the keel have to run straight, so I did a “Gougeon Double Run,” which meant switching to strips applied parallel to the keel and making the transition between the two areas along a fair curve. [Editor’s note: The strips closest to the keel take quite a twist from ’midships out to each end. While the author worked all of the strips cold, steaming the ends, or wrapping them with rags and pouring boiling water over them, would help the ends come home with less strain.]

The Glen-L design shows eight laminated thwart knees 3/4” thick. I made several knees to this design and while they were strong enough, they looked undersized on a 17′ skiff. I ultimately made the thwart knees, transom knees, and breasthook all 1” thick, a small refinement, perhaps, but one that looks right aboard the Whitehall.

The instructions mention foot stretchers; while they’re important to a powerful stroke, I had in mind from the beginning adding a sliding seat. To support the tracks, I installed two parallel beams, secured under the three rowing-station thwarts and notched to sit flush with their tops. The beams also support the tracks for the racing-shell stretchers. This enhancement with the foot stretchers is essential for getting the maximum performance with the sliding seat.

I launched STELLA in August 2015. Between receipt of the Glen-L plans and first launch, I spent 1,500 hours on the project, more than half of that fairing, ’glassing, sanding, and varnishing. I spent $10,448 on the materials to build the boat.

When I pulled on the oars the first time, I was amazed and delighted with the performance of the Glen-L design. The Whitehall is easily driven, runs straight, and is stable, although initially tender. A solo rower (or sculler, more properly) can easily sustain 4 knots. The Whitehall has a beam of 4′ 6″, appropriate for oars 8′ to 9′ long. Mine are 8′ 6″. For tandem fixed-thwart rowing the stretchers are removed and then two rowers can sit on the thwarts between the tracks. It’s lots of fun with two pulling, and there’s plenty of distance between the fore and aft rowing stations to avoid a clash of blades. I have seen pictures of other 17′ Whitehalls rowed with three at the oars, so it’s possible, though we haven’t tried it. It comes down to a question of elbows and knees.

Glen-L notes that the Whitehall can carry six; we’ve only had four adults aboard in reasonable comfort and safety, but there is room for two more.

Now that we have the Whitehall, members of my family would rather row than walk on the beach, a sure sign of a good design. The boat is not too big to use as a dinghy for a larger vessel, or too small to provide a workable platform for scuba diving and snorkeling.

The light weight of my Whitehall makes it easy to move off and on the trailer. The stock trailer I bought and modified for the boat weighs about 300 lbs, so the load is an easy tow with my Mini Cooper Sport. The month following the launch of the Whitehall, christened STELLA, my wife and I trailered the boat 1,300 miles from southern California to the Wooden Boat Festival in Port Townsend, Washington. We were delighted with the positive reception the boat received by attendees and by rowing aficionados in particular. We’ve made the trip three more times since then. The Glen-L Whitehall is a great boat and a real crowd pleaser.

Joe Titlow is a retired research engineer, working primarily in the aerospace industry. Besides building small boats, he constructs small buildings and furniture for his wife, two daughters, and grandchildren. Joe has owned and raced a 27′ Soling sailboat for many years, and he has been a member of the San Francisco Yacht Club for 40 years. Throughout his career he has maintained a professional interest in the dynamics of sailing vessels. 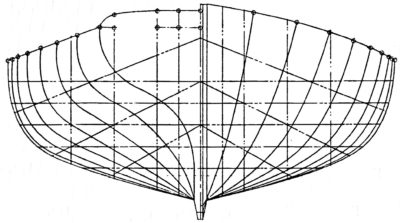 Plans and patterns for the Whitehall 17 are available from Glen-L.

The shapes moving across the surface could hardly be called waves. There were no discernible patterns, only random mounds and hollows that changed so quickly that the water couldn’t keep…

Downstream from the city, the banks became heavily tree lined, and we made our way between small wooded islands and past the mouths of numerous back channels. A pair of…

The Resp-O-Rator, an odd-looking device with twin snorkels connected to disposable dust filters, isn’t compromised by a beard. The mouthpiece goes between lips and teeth, and the attached clip clamps…

Small-boat cruisers rarely travel at night intentionally, but sometimes we get caught out late or we need a predawn start to catch a favorable tide, like I did while rounding…

As 2015 drew to a close, Peter had nearly finished the build, but the project was brought to a sudden halt. Peter was given a diagnosis of an aggressive brain…

fter 20 years spent building, then sailing our beloved 38′ ketch, a Herreshoff Nereia, on the Great Lakes and St. Lawrence River, there came a point when Louise and I...