An amateur-friendly update of a Herreshoff classic

A century ago Nathanael Herreshoff designed a 16′ keelboat known widely as the H 12½ after its 12′6″ waterline length. She was intended to handle the steep chop and strong winds of the Eastern Seaboard, and to serve as a sailing trainer for the young men of the Buzzards Bay Yacht Club. The late Joel White drew a shoal-keel version of the H 12½ that proved even more widely popular than the original, despite the fact that, with carvel planking on steam-bent frames, it is not generally regarded as an easy boat to build. John Brooks, after many requests from his students at WoodenBoat School, drew up plans for a glued-lapstrake version, and in 2002 launched RED SKY, the first Somes Sound; eight years later he offered his plans for sale. When I came across photos of the Somes Sound, I knew I had to build one. John’s plans for lapstrake construction eliminated many of the obstacles that would discourage the average boatbuilder from attempting to build this most beautiful sailboat. He employs a number of methods for decreasing the time and skill required to build the Somes Sound: planks are cut in one full-length piece from pairs of marine plywood sheets scarfed together end to end; using an inner and outer stem eliminates the need to cut a rabbet in the stem; and the garboards are planed flush with the keelson, then capped with the deadwood and the lead keel.

John’s plans are very detailed and are accompanied by an extensive building manual. The boat is built upside-down on a building jig that keeps everything in alignment. To accommodate the rocker of the hull, the keelson has to be built up from two pieces. I made a vertical guide fence, an infeed table and an outfeed table for my bandsaw, and resawed 4/4 stock in half. Planed smooth into two 3/8″ boards, the two keelson halves were epoxied back together upon installation on the molds.

Building a boat with a full bilge and overlapping planks provides the builder with challenges as well as opportunities to learn new skills. Spiling strakes, cutting gains, planing rolling bevels, laminating inner and outer stems, building spars, and pouring a lead keel, all may be unfamiliar tasks to many but provide newfound pride when completed. In numerous blogs and comments by fellow amateur boatbuilders, I find one common theme runs through their experiences with the Somes Sound: All take great satisfaction and pride in learning new skills that they never dreamed they could master.

The most challenging prospect for my building of the Somes Sound was the lack of a helper. I learned quickly that clamps and homemade jigs are the solo boatbuilder’s best friend. Wrestling a wobbly 15′ plank into place requires planning, an ample supply of clamps, and some homemade support brackets to keep things in place during alignment. Screws inserted into predrilled holes in the joint laps and anchored into backing battens align the strakes and produce epoxy squeeze-out to ensure a good bond. Epoxy is very slippery stuff even when thickened, so having an alignment system is critical.

By far the most daunting prospect for me was building a mold for the keel and then melting and pouring hundreds of pounds of lead into it. By scribing 1/8″ plywood to the keel and deadwood the keel, I transferred the contour to stacked 2×8s and cut them to shape on the bandsaw to form the bottom of the mold. The sides of the mold were ¾” plywood, and all of the surfaces that would come in contact with the molten lead were lined with a ceramic-fiber fire-resistant paper. Copper pipes created shafts for each through-bolt. When I had finished the pour, the mold had taken nearly 640 lbs of lead.

Another challenge was to figure out how to install that heavy lead keel by myself. The solution was to raise the keel and install it prior to turning the hull over. My biggest concern was the structural integrity of the steel canopy of my boat shed that would take the load. I attached a 2×12 to the steel rafters to spread the weight. After I’d removed the lead from the mold and cleaned it up, I lifted it using two ½-ton chain hoists. The copper bolt shafts provided alignment for drilling through the keelson. I did a dry-fit with the bolts inserted and tightened and, satisfied with the seam, I raised the lead, applied epoxy to the joint, and permanently bolted the keel to the hull.

Then the question arose: How do I turn the hull over while it’s still attached to the building jig and has over 600 lbs of lead attached? I wrapped wide nylon straps around the hull and raised it using the two chain hoists. I used a third hoist to control the lead keel during the rollover. When the hull was high enough, I removed the molds from the hull, and took the legs off the building platform to allow it to rest directly on the floor. The nylon straps supporting the hull were slippery enough to slide through the chain-hoist hooks, so I could lift upward on the starboard sheer and rotate the hull. Once the weight of the lead passed the tipping point, a third hoist controlled the rotation until the hull was upright and the keel was centered over the building platform. I lowered the hull onto the jig and installed braces to stabilize it. I had made the platform frame from 2×12s so the height was ideal for finishing out the interior. Later I used the slings and chain hoists to lift the boat and set it on its trailer.

For those who are not inclined to tackle the task of melting lead, the Somes Sound 12 ½ uses the same lead keel as the Haven 12 ½, and ready-to-go lead keels are offered by several foundries nationwide. For builders who aren’t close to a foundry that casts Haven lead keels, building the keel mold from the optional Somes Sound keel plan, then having a local foundry cast the keel is another option.

If you are contemplating building a Somes Sound, I encourage you to read John Brooks’s book How to Build Glued-Lapstrake Wooden Boats. If you want to peruse the construction process on the web, John has a photo series (mixed with other photos over two pages) on his website, or you can check out my blog.

Building the Somes Sound was truly a rewarding experience, and sailing the boat has been the frosting on the cake. I have sailed a wide variety of different boats over the past 50-plus years, but my Somes Sound, christened L’ETOILE DU MATIN (MORNING STAR) by my French-born wife Huguette, is truly my favorite.

I opted for the gaff rig John drew for the Somes Sound rather than the marconi. The mast for the gaff rig is 18′ long, making it easy to fit the trailered boat, with the mast laid on top, in my garage. The shorter mast and lower rig also gives the boat excellent stability. The hollow bird’s-mouth construction of the mast makes it light enough for me to step singlehanded. At the launch ramp it takes me about 45 minutes to step the mast and rig the sails. I installed side guides on the trailer so launching and retrieving is also a one-person job.

I sail solo on most occasions, and having a boat that does not involve a complicated rig was a high priority. Once the self-tending jib is adjusted, the only activity for me is to steer and keep the mainsail adjusted. L’ETOILE DU MATIN is so responsive she can turn 180 degrees in a radius of one boat-length. The lead ballast makes her stiff in a strong breeze, and the large weighted centerboard gives her excellent upwind tacking ability.

After a frustrating season of sailing in the Nevada County foothill reservoirs—where wind is the exception, not the rule—I took L’ETOILE DU MATIN to Southern California and sailed her out of Ventura Harbor. From late spring to fall there is a dependable onshore breeze every afternoon. It usually reaches 15 to 20 miles per hour, perfect sailing weather for a Somes Sound. The harbor offers both sheltered water in the inner channel and a full onshore breeze as you sail out the entrance channel. Because large swells are common to the Pacific coast, I have thus far opted to stay behind the shelter of the outer breakwater, but even there I have nothing to complain about; it’s a joy tacking into a strong breeze. Both with a crew and solo, L’ETOILE DU MATIN has shown herself to be an able sailer.

David Johnson retired in 2005 after 30+ years as a general contractor. After two years of remodeling his home in Grass Valley, California, he decided to try building a boat. His first sailboat was a 16’ single-chine cutter; that got him hooked. His next build was the Somes Sound 12 ½, his crowning achievement. He is presently building a Rundgatting Snipa that has morphed into a small Viking vessel. 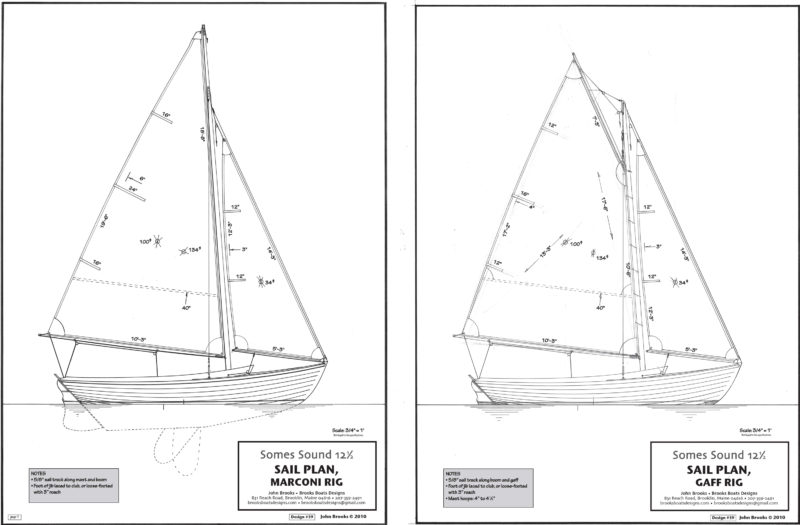 Plans for the Somes Sound 12½ are available from Brooks Boats Designs. 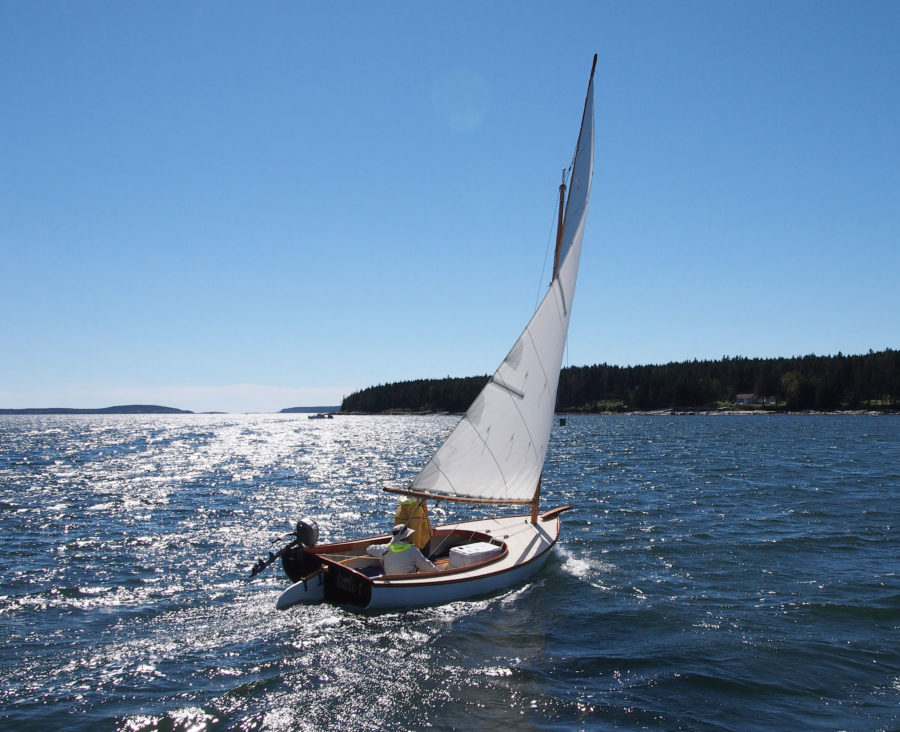 I had spent a long time looking for a boat that I could build to sail the waters of Chesapeake Bay and beyond. The boat would need to be able…

I had timed my launch for the afternoon slack tide; it was a late start, but at midday the ebb pouring through Rosario Strait would have been running against me…

The Land Shark Instant Survival Shelter is a multipurpose survival bag that’s affordable, lightweight, compact, and reversible: international orange on one side and digital camouflage on the other. The orange… 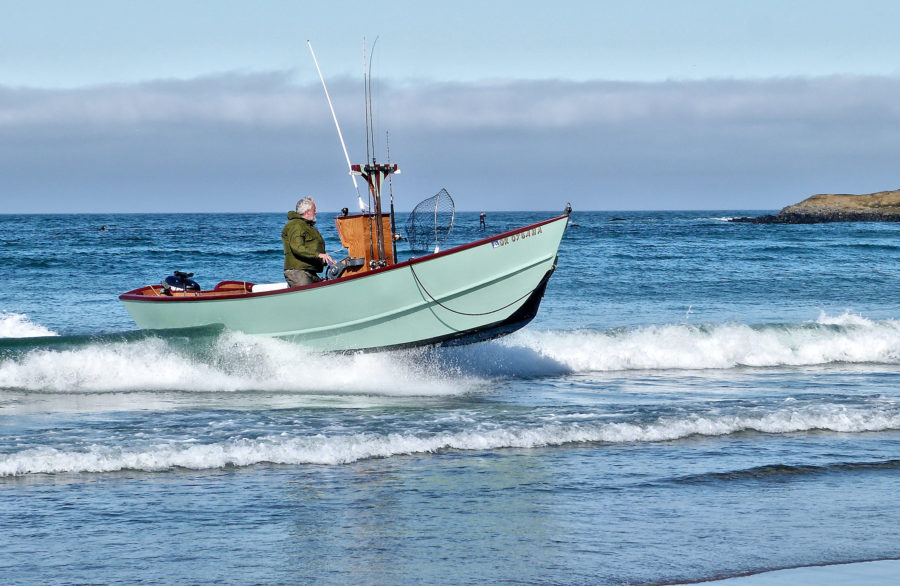