Suitable for Framing - Small Boats Magazine
From The Editor

There’s an interesting exhibition of art at the Georgetown Historical Society in Georgetown, Maine. Some of the pieces on display are an unusual pairing of abstract painting and wooden boat models. The disciplines of art and boatbuilding have very different goals, one purely aesthetic and the other quite practical, but both require thoughtful attention to form. The artist/boatbuilder who created these pieces is Willits Ansel.

“For boat builders to paint is not unusual,” Willits noted in his comments about the exhibition. “Fairness and balance are factors to be mindful of, whether designing a boat or painting an abstraction. What may make for beauty, particularly, is line, and balance, found in each though more a necessity in the models.”

Willits was in the middle of preparing for the exhibition when he passed away unexpectedly in April at the age of 90.  His granddaughter Evelyn Ansel, an SBM contributor, wrote: “He was a painter all his life, and his last project was a collection of abstract pieces, to which he attached his entire life’s work worth of half models. Feels a little like the joke was all on us; I can hear his wicked giggle every time I look at them. He died so suddenly that a few things were half finished, but we put the show up anyhow.”

I didn’t know about Willits’s art previously but I knew of his work on historic small craft. His book, The Whaleboat, published by Mystic Seaport in 1978, was one of the first books I bought when I started building boats that same year. His interest in art preceded his work with boats. When he was 12 he took a still-life class, he started painting when he was 17. In 1970, at the age of 41, Willits went to work at Mystic Seaport and began building small boats, about 100 of them over the course of his life.

It’s not surprising then that his two pursuits, art and boats, intersected. (As for the “joke” of hammering a half model to the frame of a painting with a couple of galvanized box nails, I think it’s a revealing act of irreverence, a hint that the value of creation is in the process, not the product.)

Like Willits, I came to boatbuilding after being drawn to art. In high school, my interest was in science up until my junior year when I was required to take an art class. That quickly and unexpectedly changed my trajectory. Going into college, I knew I would major in art and ultimately set my sights on portraiture. While that discipline produces quite different results than the abstract art that captured Willits, the pursuit of beauty, line, and balance is the same. After I graduated in 1975, I continued drawing portraits in pencil and did a couple of busts in modeling clay.

At that time, I also was doing a lot of hiking and bike touring, and liked to travel under my own steam. I decided to build a dory skiff to cruise the Inside Passage. As the planking went on the molds, the curves began to appear and I found them mesmerizing. I experienced what Willits wrote: “What may make for beauty, particularly, is line.” At the end of a day’s work on the boat, I’d sit in a corner of my shop and scan the shape as if staring into a campfire. Building the boat was no longer just a means to an end, but the creation of sculpture.

When I taught at WoodenBoat School in the ’90s, there was a planked half model on the wall of the school’s dining hall. It was a carvel-planked keel boat, a form defined by the flow of water. As sculpture, the play of convex and concave curves and the transitions from one into another are like those on a young face, from cheek to the bridge of the nose or from lower lip to the chin.

Years later, my intersection of art and boatbuilding reached its apex in working with my friend Mary Van Cline, a Northwest glass artist well known for combining photographs with glass sculptures and panels. We had met as sea kayakers, discovered a mutual interest in art, and ultimately collaborated on some mixed-media pieces. I made frames of traditional kayaks—most of them at scale, one full size—and modified versions of Alaskan Inuit single-bladed paddles; she made hands and faces cast in glass from life molds in addition to the large glass-panel photographs. We put together one exhibition for the Leo Kaplan Modern gallery in New York City.

We did another exhibition in a Seattle gallery and made new works to be auctioned at fund-raising galas put on by the community of Northwest glass artists and their patrons.

One of the pieces we produced was purchased by an art-collecting couple in San Francisco. The element I contributed was a model Greenland kayak frame with the chines and keel omitted and a pattern of curves carved into the deck beams. A few years later, selected pieces of the collection, including our work, was shipped to Boston for an exhibition at the Museum of Fine Arts. The young art student I once was might have preferred making it to the MFA as an artist, but I’m OK with making it there as a boatbuilder. There’s not all that much difference.

With sympathy to Evelyn Ansel and her father Walt Ansel, and gratitude for their permission to use images of Willits’s artwork. The exhibition—Willits Ansel: Recent Works—at the Georgetown Historical Society in Georgetown, Maine, is open through July 10. 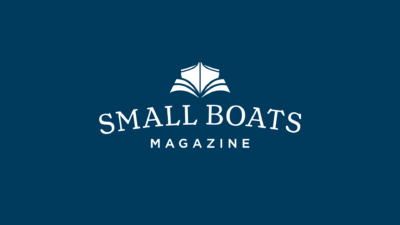 With this issue we’ve taken on a new name and a new look. We’ll still be doing our best to provide you with the most informative and engaging articles about small boats.

here’s an interesting exhibition of art at the Georgetown Historical Society in Georgetown, Maine. Some of the pieces on display are an unusual pairing of abstract painting and wooden boat...

We’d started at Deer Isle, where we had lived and worked for 14 years, and we planned to paddle a big figure-eight: first down to Portland and back, and then…

Bringing the pressure up to 40 psi is sufficient to propel the remaining 4 gallons of water out of the tank. The nozzle I have on the hose will shoot…

We researched benchtop planers and decided the DeWalt DW734 would meet our requirements. Its 12-½” wide bed could handle the 12”-wide garboard that we needed to replace, and its 6”…

The QL15 model has two black, rubber-coated metal S-hooks, one of which is on a 9-1/2” piece of 1” polyester webbing, and the other is at the end is a…

Neither Claudia nor Jacob came into that class with much experience in marine design beyond scanning online videos and blogs. For guidance on construction they studied Nick Schade’s The Strip-Built…