A boat, boredom, a book, and a baby

Bruce Holaday got an early start with boating. His father ordered a $50 pram from the Sears & Roebuck catalog and turned Bruce loose with the boat on a clear-water lake in Indiana. Bruce spent his boyhood summers in the company of ducks, turtles, muskrats, and fish. The experience of independence and of being in command of his own vessel stuck with him; the prospect of a grandchild got him thinking about his childhood and the important role a boat played in his growing up.

Bruce, now living in Oakland, California, and the director of an environmental non-profit, wasn’t a skilled woodworker so he decided a kit boat would the smoothest sailing to a successful build. He found Joel White’s Shellback Dinghy in the WoodenBoat Store catalogue and ordered a kit for the sailing version of the boat. The Shellback is 11′ 2″ long, has a beam of 4′ 5″, and carries a standing lug sail. In the past quarter century it has earned a reputation as an easy boat to row and sail. With a recommended capacity of 1 to 3, it could carry grandparents and an infant grandchild, and would be a good boat for a young boy or girl to strike out on his or her own as Bruce did when he was a child.

The kit had all of the pieces shaped and ready to assemble, but Bruce found many ways to make the boat distinctive, from a brass name plate inside the transom to a copper plate on the breasthook to surround the painter’s padeye.

Bruce launched the boat and christened it PETIT BATEAU, but he was a bit ahead of the grandchild schedule. Without the boat to occupy his free hours, he felt boredom settling in and cast about for another project. He settled on writing a children’s book about the boat the fun of being a young skipper. He found a publisher in South Bend, Indiana, not far from the lake where he first took command of the Sears & Roebuck pram. 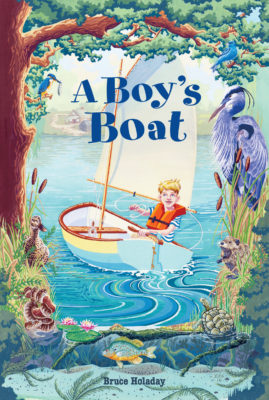 The book, A Boy’s Boat, was published in March, 2017. Bruce describes the book as “the story of eleven-year-old Jack and PETIT BATEAU, the 11-foot-long dinghy that Jack’s grandfather made for him. During Jack’s summer of learning how to row, sail, and scull the boat, he comes to know all the creatures of a small cove, the joy of warm sunny mornings on the water, as well as the darker shades of nature and the challenges they present for a small boy and his small boat.”

There is no grandson Jack. The book, like the boat, is ahead of the grandchild schedule. Bruce’s daughter is engaged to be married in October, and the arrival of a “Jack” or a “Jill,” if here is to be one, may still be a long way off. He may have to come up with something else to stave off boredom. PETIT BATEAU can keep him company while he waits and hopes.

Looking Back at What’s Ahead

A few years ago I adapted my W.P. Stevens-designed decked lapstrake canoe for sliding-seat rowing. The canoe has taken well to oars and outriggers and now makes better speed than…

Drawn to the Islands

I slid ROW BIRD, my 18’ Iain Oughtred Arctic Tern, into the waters bordering the town of Sidney on Vancouver Island. I was launching very late in the day—I’d just…

My camp-cruising boat is rigged as a lug yawl, with a powerful and well-behaved pair of sails that is ideal for solo sailing. My cruising grounds tend to have very…

When the fire is going strong there is indeed very little smoke and what does emanate from the stove dissipates a couple of feet above the ground. The visible effect…