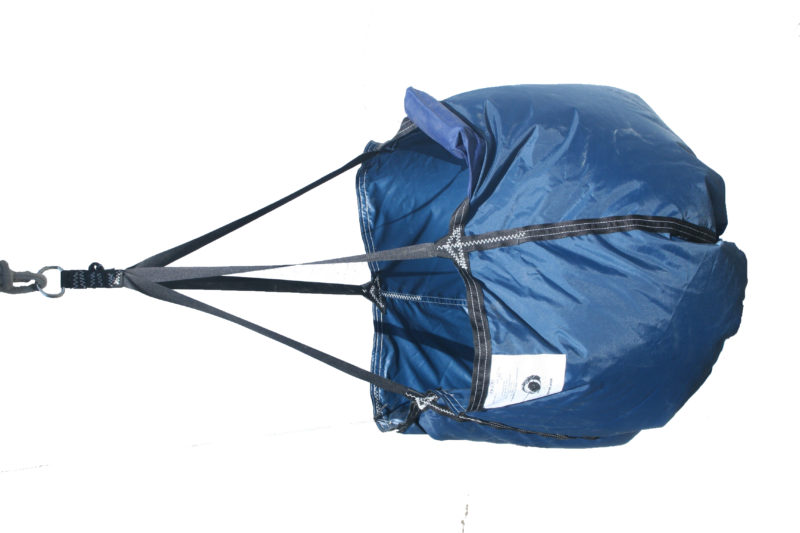 Sometimes it’s nice to be able to drift. But just drifting means your boat usually ends up broadside to the waves and slipping downwind. If you want to hold a position comfortably in deep water, that’s what a sea anchor is for. Paratech’s parachute-like sea anchor Boat Brakes is well made, with webbing and stainless hardware to take all the loads. It has provisions for a main towing line and a light control line to invert the ’chute and reduce the drag it creates. Billed by the manufacturer as “The Fisherman’s Sea Anchor,” it’s designed to keep a boat over a good fishing spot, or slow a boat with a motor whose trolling speed is too fast. It’s also for emergency use to keep a boat’s bow into the waves and reduce the risk of swamping. It can also be really useful for a small sailboat when reefing. Many small boats want to lie cross-wind or run off downwind, which makes sail handling in breeze challenging. Deploying Boat Brakes would make this much easier.

I tried a 24″-diameter Boat Brakes and set it from my 16′ Swampscott dory. There is a float sewn into the perimeter at the top and a weight sewn in on the bottom. You can toss it in the water, and it will sort itself out. I didn’t use a control rope, just the main towline. I used about three boat lengths of line, which seemed to work fine.

It was a snappy day on Maine’s St. George River with 10–20 knots of wind coming several miles straight upriver, an opposing knot or two of current, and whitecaps aplenty. There was enough wind so that the dory heeled in gusts hitting abeam. Just drifting, my GPS showed we were moving at half a knot to a knot downwind into the current with the dory riding uncomfortably beam-to-wind. I set the Boat Brakes over the stern (the dory’s transom is quite narrow), and immediately the stern pulled into the wind. Lobster trap buoys nearby showed I was stopped. Gradually the current took over and pulled me at about half a knot into the wind. I rowed a half mile upwind to a spot where the current ran harder, with whitecaps more numerous, and tried it again. Again a dead stop and then gradually progress into the wind.

On much lighter day I deployed the Boat Brakes from an 18’ aluminum outboard skiff with a modest outboard on the stern in a light breeze without measurable effect. The boat stayed broadside, and did not slow. This was clearly a larger boat than was intended for the 24″ model; Paratech’s recommendation would be for a 36″ version. Set from my canoe-like 16′ Delaware ducker on a local lake, the 24″ Boat Brakes stopped me dead.

I can readily see adding Boat Brakes to the kit of a small boat to ride out in weather, manage sails while comfortably luffed, or just take a break.

Ben Fuller, curator of the Penobscot Maritime Museum in Searsport, Maine, has been messing about in small boats for a very long time. He is owned by a dozen or more boats ranging from an International Canoe to a faering.

Manufactured by Paratech Engineering, the 24′′ Boat Brakes sells for $139.

I started using a 36″ Paratech sea anchor in 1990. It’s similar to the Boat Brakes reviewed here, but it’s made with parachute cord instead of webbing and lacks the float and weight sewn into the edge. It’s quite useful when I’m ready to drop the sailing rig and head for the launch ramp. (The ramp is hidden from view by a breakwater and if it turns out to be crowded I prefer to approach under oars instead of sail.) The two boats I sail most often have mizzens so I can bring the bow into the wind by sheeting the mizzen in hard and letting go of the main sheet and tiller. I can then easily drop the main while hove to, but I’ll drift downwind and have to hustle unless I deploy the sea anchor.

My son uses the sea anchor while he and his friends swim from his 19′ Escargot canal boat. It has a lot of windage and a very shallow draft and can move quickly even in a light breeze. With the sea anchor deployed it stays put.

In the video above I deploy the sea anchor from my Caledonia yawl. You can see the downwind drift is significant even in light air and without the sea anchor I would have lost much of my windward progress during a long and leisurely lunch break. I used to think that sea anchors were just for riding out storms on open water, but I’ve found mine very handy for less dramatic purposes.