I trust Joshua Slocum’s Sailing Alone Around the World needs no introduction here. I have three copies of it: the paperback volume I read in seventh grade, my father’s 1950 hardback, and a 1905 edition I received as a gift from my friend Paul Thomas. Every time I pick up that oldest book, I think of the hands that opened the cover over a century ago to sign it.

Slocum signed this book 9 years after completing his circumnavigation. Ill at ease at his home on Martha’s Vineyard, he spent much of his time sailing the East Coast aboard the aging SPRAY and occasionally selling copies of his book. At the time he signed this book in May of 1907, he was in Washington, D.C., and had a meeting with President Theodore Roosevelt at the White House. 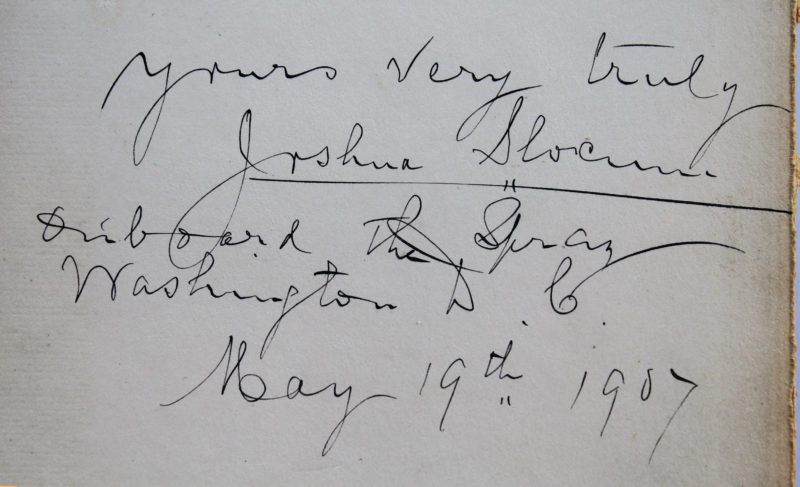 Last month Slocum’s great-great-granddaughter, Susan Slocum Dyer, spoke at Seattle’s Center for Wooden Boats and brought with her stories about the world’s first solo circumnavigator and some keepsakes that had been passed down to her. Susan’s mother was born a Slocum, the granddaughter of Benjamin Aymar Slocum, the second son of Joshua and his first wife, Virginia Albertina Walker. When Susan was eight years old, great-grandfather Benjamin told her that she was the great-great-granddaughter of “the greatest sailor who ever lived.” Young Susan asked what had become of him, and Benjamin told her he was lost at sea and probably drowned. “He was the greatest sailor who ever lived,” she replied, “and he drowned?! I’m never going near the water.”

Before making his circumnavigation of the globe from 1895 to 1898, Joshua and Virginia—“the love of his life,” Benjamin often said—spent much of their life aboard ships under his command. Susan had with her a handwritten page listing children born to them. On one side of the page were the children that are recorded in the historical record—Victor, Benjamin, Jessie, and James—but on the other were the names of three more children: twins Frederic and Edith, and Helena. None of them survived infancy. They died at sea and, but for the piece of paper Susan had, would have been forgotten. I found an extensive genealogy of the Slocum family online, and those three names are indeed missing from that record. Susan noted that when Helena died, Virginia couldn’t stand to bury another child at sea, so Joshua embalmed her in brandy so she could be put to rest ashore. That story had survived in a letter Virginia wrote to her mother in 1879, but the infant’s name wasn’t mentioned. Susan brought Helena’s name to light.

NORTHERN LIGHT was one of the ships under Joshua’s command. Susan brought with her the ceremonial flag flown by the vessel, an enormous flag of dark blue with white stars. Susan had studied it carefully and found repairs done in many different patterns of stitching, an indication of how many people had cared for the flag. One of the people attending the talk asked if there was any significance to the stars and to their arrangement. Susan suggested that there was a connection between the stars and the man Joshua was accused of murdering. While sailing AQUIDNECK, a ship he commanded prior to NORTHERN LIGHT, Slocum had to repel an attack by pirates. He shot and killed one of them. He was tried and acquitted. Susan was coy about the connection between the shooting and the stars, and knew more about the case than she was going to reveal to us, saying only, “Believe me, I have evidence.”

She also brought a small oilcan that Joshua had used aboard the SPRAY. Her mother had given it to her as a gift at a time in Susan’s life that she had evidently been stuck and in need of a little help to get running smoothly again. To see things that belonged to Joshua Slocum, and to hear stories about him that were known only to his family, was quite moving.

If you haven’t read Sailing Alone Around the World, do yourself a favor and get a copy. It belongs in your bookshelf.

The Power Dory and the Pilot

Art Arpin was a Flying Tiger. He wasn’t one of the original group of American aviators—he joined just after the departure of their commander, Claire Lee Chennault, in 1942—but took…

It’s widely accepted that organic food is better for us and the environment, so it’s not a great leap to reason that organic paint would be just as good for…

The steam launch E. SCOTT HAMMOND is just one of the many boats John has built. Its lines were inspired by a Karl Stambaugh cruiser that John scaled down to…