I never saw Frank Prothero smile. He was a gruff, imposing figure with enormous beat-up hands who looked like he had strayed here from the 19th century. He was revered in Seattle’s wooden boat community for his lifelong career as a shipwright and, even beyond the respect due for his inestimable accomplishments, he had an air about him that commanded it. I used to see Frank back in the early 1980s when I was working for Joe Bucek and Land Washburn, owners of the Wooden Boat Shop in Seattle’s University District. I was in my late 20s and had built just a handful of boats and knew just enough about boatbuilding to mind the store.

Frank was then in his late 70s and had been building boats for over 50 years. It was in his blood. His ancestors in Wales had been building boats since the late 17th century, his great-grandfather immigrated to Seattle in 1870 and went into business building boats on the shores of Lake Union, and his grandfather, father, and brother were all shipwrights. Frank was in a retirement, of sorts, and was building himself a 65′ gaff-rigged topsail schooner in a floating boatshop on the south end of Lake Union. He had been working on it since 1965.

Frank would often come to the Wooden Boat Shop, always wearing a newsboy hat, a khaki shirt, and leather work boots with white crepe soles. I don’t recall ever speaking to him beyond a hello when he came in, or getting any more of a reply other than a nod. When he wandered the aisles looking at the wares, he had a habit of pressing his lips together tight in a straight line, turned neither up nor down at the corners of his mouth.

During one visit, he was browsing around the store while Joe was helping another customer come up with a fix for a leak between his boat’s keel and a garboard. Joe was well aware that Frank was within earshot, and when he had come to the end of his recommendation he turned to Frank and asked, “Does that sound about right, Frank?” I don’t recall that Frank even looked up, but he muttered, matter-of-factually, “I don’t give a good goddam what he does with his garboard.” I was thunderstruck; steeped as I was in Seattle politeness, I couldn’t imagine being that unbridled, and admired him all the more.

I could put Frank’s abrupt manner in a familiar context because my Massachusetts-born father had raised me on the Downeast humor of Marshall Dodge of Bert & I fame. His record albums were inhabited by lots of crusty New England old-timers. Dodge tells a story about Maine shipbuilder Harvey Gamage impressing the owner of a boat that needed a fix for a puzzling leak, at a garboard in fact. Gamage took one quick glance at the boat and gave him the simple solution to the problem. The customer asked, “How did you know just what to do?” and Gamage replied, “Goddammit man, I can’t understand all I know.” Frank was just such a character. Genius can be forgiven for the faults that often attend it.

Joe let me accompany him once on a visit to Frank’s shop. It sat on a 110′-long barge, and the schooner filled the cavernous shed built over it. I kept my eyes open and my mouth shut. As I recall, Joe told me that Frank started the project with the lofting—no model, no drawings, no offsets—he had all that in his head and just went straight to work with a batten. The hull was heavily timbered and immensely stout, and yet there were delicate carvings on the cabin cornerposts. The boat had already been 17 years abuilding and it was clear the Frank was not taking any shortcuts to finish the schooner in the years he had left in his life. Everything he did was a devotion to the best traditions of an era he had seen come to an end. He wasn’t just building a schooner, he was making a monument.

During the construction of the schooner, vandals had opened a faucet by Frank’s shop and left the water to pour into the barge. It went unnoticed for quite some time and eventually the barge listed heavily and the schooner fell over on its side. Frank pumped out the barge, righted the boat, and went right to work repairing the damage to the hull and resuming construction.

He launched his schooner on a sunny day in July 1986. After working on it for over two decades, getting it afloat on Lake Union could have been a time for Frank to be beaming, but all the while his face was set in that tight-lipped impassive expression. He christened the schooner GLORY OF THE SEAS.

Frank wasn’t being vain about his work in the name he had chosen. It honored a 250′ three-masted clipper ship, GLORY OF THE SEAS, designed by Donald McKay, best known for his GREAT REPUBLIC, the largest full-rigged ship ever built in America and FLYING CLOUD, a record-setting clipper. GLORY OF THE SEAS was launched in 1869. She was the last and the finest of McKay’s clipper ships and sailed for 41 years before being stripped of her masts to serve as a cannery and cold storage. On May 13, 1923, she was run aground south of Seattle, at Brace Point, and burned for her iron and copper. Frank, then 18 years old, was there and took part in the salvage. He must have seen how beautiful a ship she was and regretted taking part in her ignoble demise.

Frank died on November 16, 1996, at the age of 91. Just the night before, he had been working on GLORY. As far as I know, he had never raised sail on GLORY, but that wasn’t his goal. His son, Bill, related how Frank felt about sailboats: “He used to say the only reason to take them out was to have an excuse to work on them when you get back.”

GLORY remained afloat in Lake Union and for years, I often visited her when I kayaked around the lake. She was tied alongside a boat shed that could have protected her but for her masts, towering even though her topmasts were gone, so she remained out in the weather. The covering built over the deck was eventually in tatters. Her topside paint peeled, and a tangle of running rigging hung from the mastheads like cobwebs. The nameboard on her port bow couldn’t have been Frank’s work. GLORY OF THE SEAS was spelled out in plastic letters tacked on an unadorned  board with the first S in SEAS upside down. Her condition worsened year by year, and then last year she disappeared.

Several months ago, driving into Port Townsend, I caught a glimpse through the poplar trees along the road of a schooner propped up in a boatyard. It was GLORY. She had a gaping hole in the starboard side where the planks had been removed. Fragments of rotting frames had spilled out and littered the ground around her. A shipwright I spoke to there said that she was in need of a new owner, someone who had the skills and the finances to put her back to rights. A month ago, I went looking for her and she was gone again. A woman at the marina said she had been launched and was taken to Lopez Island.

I tracked GLORY down and she’s now in the care of shipwright Jeremy Snapp and his son Trevor. I met Jeremy when I was living on Lopez Island in the early ’80s and was impressed with the caliber of his work. GLORY is in good hands, but she’ll need the support of a broad community to fund her restoration.

Jeremy sent me the photograph above of GLORY at anchor just off the shore near his home and to see her looking shipshape again, freed from the confines of Lake Union, nearly brought me to tears. However gruff Frank might have seemed to me, this great beauty was always in his heart.

If you’d like to support Frank Prothero’s legacy and the restoration of GLORY OF THE SEAS, check the website in her name and contact the Snapps at thegloryoftheseas@gmail.com. 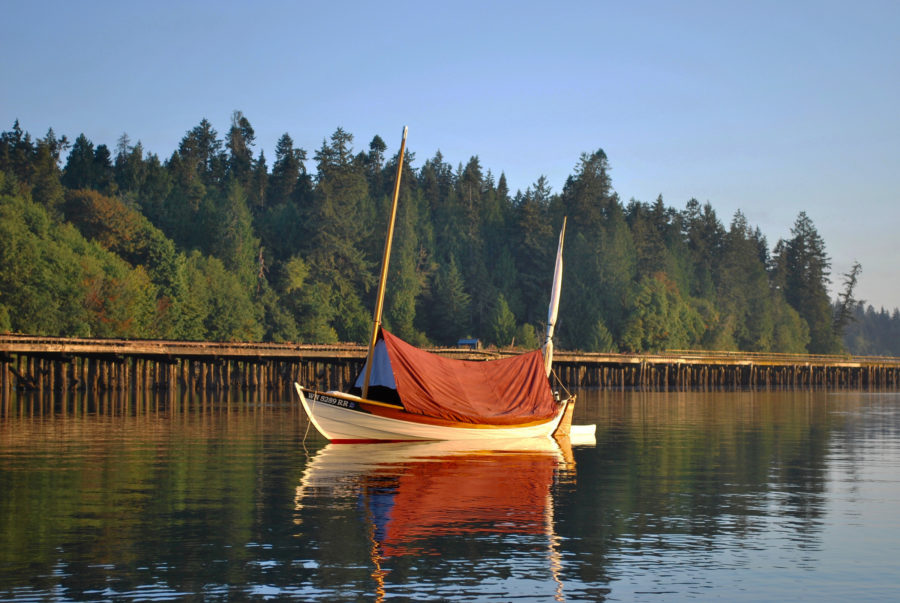 Solace of the South Salish

In the South Salish, the 5-mile stretch to the cove at the south end of McMicken would normally be a few hours under oars, with the occasional zephyr teasing us… 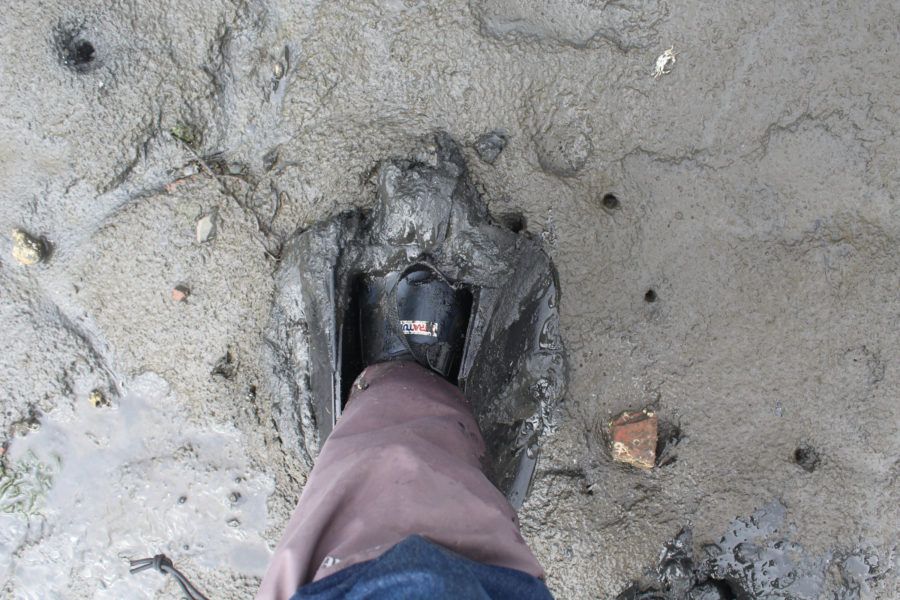 I recently came ashore in a cove where there was some very soft, sticky mud. I could barely walk in it with my deck shoes without losing them, and each…

Almost everything from customer service had been slashed with a razor or utility knife, I assume to assure employees wouldn’t collect it or sell it, but the damage wasn’t a…