A weekend cruiser from Jim Michalak

Seeing an AF4 on the water for the first time is a bit of a surprise. At a distance, the raised deck profile fools you into thinking you are looking at a classic cruiser from a bygone era. As the boat gets closer, you realize she is smaller than you thought, and that she is built of plywood. When you get a closer look at her elegantly utilitarian form, you think that maybe it is a classic after all—a new kind of classic.

As a young aerospace engineer, Jim Michalak moved from his native Massachusetts to work at a missile plant in St. Louis, Missouri. Finding a flat land of broad lakes and rivers, his attention wandered to boats. After building a Gloucester Light Dory and the prototype Bolger Birdwatcher, there was no going back. Jim now has nearly 100 designs to his credit, and the AF4 is one of the most popular, for this simple cruiser is among the most accessible designs available.

What do I mean by “accessible”? Most obviously, external-chine “Instant Boat” construction is conceptually simple for the beginner, as well as quick and easy to build for anyone. Yet this simple construction provides a purpose-designed beach cruiser with about 4″ draft. This creates access for boating in places many of us haven’t even considered. With a low trailer, an AF4 has cruised where few motorboats can even launch.

Ease of launch touches on another element of accessibility: setup time. Jim stresses that a boat that can be launched quickly and easily gets used more—sometimes a lot more. Consider how much more boating time the average working person has available if a weekday evening can be a meaningful outing. After the necessary errands, twenty minutes’ setup time can derail the whole thing; the AF4’s setup time is under five minutes.

Of course the flat bottom is not very capable on wide, unprotected water, but this is intentional. The AF4 is optimized for the sort of boating that is most accessible and appealing to most people: cruising protected waters on nice days. The AF4 is more capable than she seems, however. Flatties have a reputation for pounding in a chop, but AF4 owners feel that at 15 mph she pounds about like a deep-V hull does at 35 mph. Getting every- one to sit on the same side also eases the ride by using the chine as a shallow V.

Another element of accessibility is cost. Cheap and easy repairs encourage us to forget about resale value and use the boat. Inspired by Bolger’s Instant Boat work, Michalak designs all of his boats to be built with common lumberyard materials. These materials are not meant for continuous immersion, so I would not leave such a boat at a mooring; indeed, Jim’s Birdwatcher is kept on a trailer under cover and looks great after 20 years.

Michalak keeps his plans prices extremely low. At little more than the typical cost of study plans, he puts construction plans in the hands of dreamers so they can immediately become builders. He also lends confidence with information through his online boat-design articles (www.jimsboats.com) and his book, Boatbuilding for Beginners (and Beyond!) (www.duckworksbbs.com/ media/books/michalak/index.htm). Fuel efficiency makes for longer trips. As an engineer, Jim thinks a lot about things like power-to-weight ratio, efficiency, and range. The AF4’s flat bottom gets her on slow plane at 10–11 mph with about one horsepower per 80 lbs. This means a whole family doesn’t need more than an 18-hp engine, and a solo trip can get by with less. Jim makes this speed solo in his own AF4 with a 50-year-old 7.5- hp motor, yielding 15 mpg. A modern motor should do better. Even if you can afford to feed a go-fast boat, there is a limit to how much fuel you can carry. The AF4 lets you carry enough fuel to go a long way without resupply. Range—getting away—is an integral part of the designer’s concept of a camp-cruiser.

“Getting away” was, in fact, the whole reason for this design. Jim originally designed the AF4 as an efficient camp-cruiser for his own use. In this role, the AF4’s flat bottom is not just a simple method of construction. Jim is known for his spartan interiors— his cockpit contains only a folding lawn chair. This minimalist approach not only saves weight, but also provides lots of usable space for sleeping and stowing camping gear. This boat truly sleeps two in the cabin. The flat bottom also lets you creep into tiny, secluded waterways and beach gracefully. Indeed, you can pole her into places where canoes run aground.

A cabin allows you to bed down with less fuss than a cockpit tent, but at the price of stooping. This cabin is an exception. A full-length “slot top” lets you walk upright all the way to the bow. Personally, I don’t know how I ever got by without this feature. When beaching, you simply walk forward, lean on the foredeck, and swing your legs out to plant your feet on dry sand. You can even fish from this slot, and its mechanics are handy when a hooked fish crosses under the boat. A few builders have made boarding even easier (myself included), modifying the cabin with a dropboard entry to the self-draining forward anchor well. Recently Jim went even further with his own boat and added a fold-down door in the side of the well. It looks a little odd, but kids and old joints appreciate it greatly.

That anchor well is very useful for muddy shoes, clothes, fishing gear, or anything else you don’t want messing up the cabin. If you run out of space there, the motor is mounted in a slop well with space for fuel tanks and reboarding after a swim. Keeping the tanks in a draining well is a nice touch, since vapors drain overboard to eliminate the risk of explosion.

A sailor seeking a powerboat tends to be uncomfortable replacing the quiet bliss of sailing with a noisy, expensive gas-guzzler. The AF4 strikes a balance, as the motor is small, quiet, and economical. She is small enough that you still feel in touch with the wind and water, but you can cover much more distance in the time available. And Jim is right—with no rig to fuss with, most people go boating more often.

The AF4 is capable of 25 mph, but not comfortably. She is happiest at slow planing speeds of 10–15 mph, and there is no apparent “hump” in getting to them. This is her most efficient range as well, creating less wake than many motorboats do at “no wake” speeds. Wakeboarding wouldn’t be much fun behind an AF4, but it can pass a canoe at slow plane without causing the paddlers much trouble (crew coaches take note).

I was on the water one day in my AF4 Breve—the 15-1/2′ version of the original 18′ AF4—when a group of folks in a raft of large powerboats waved me over to ask about my boat. Apparently they had been impressed with her looks and performance in the day’s light chop—and were even more impressed that we had only a four-gallon fuel tank. The fellow I was talking to started listing those advantages, along with cost savings on fuel, storage, mechanical work, slip fees, and maintenance. Apparently, the fuss and fuel cost associated with boats like his lead many to use them essentially as lakeside cabins. Friday after work they motor out a short distance and raft up with friends, then get around in the dinghy all weekend.

The AF4 (or AF4 Breve), the man suggested, would be a welcome improvement over the typical dinghy in this application. Kids and groceries ride out of the weather, and the adults can stand in the slot and lean on the cabintop while chatting with fellow boaters. The slot top makes easy work of docking and coming alongside, as well, which is very welcome after staying up too late chatting. Perhaps best of all, meaningful day trips become possible without moving the big boat.

The AF4, in short, is a weekend cruiser that gives you everything you need and nothing you don’t. Whether you are a neophyte or salt-crusted, this efficiency equates to accessibility. Accessibility means you get on the water more often.

And what about the name? It sounds like a jet-fighter moniker, but it isn’t. Rather, AF4 is the fourth design named “Alison’s Fiddle.” Jim was fortunate enough to witness firsthand the development of a young Alison Krause in regional fiddle competitions. And what is Alison’s fiddle but a cleverly crafted wooden box that can do amazing things?

This Boat Profile was published in Small Boats 2010 — for more information, visit Duckworks. 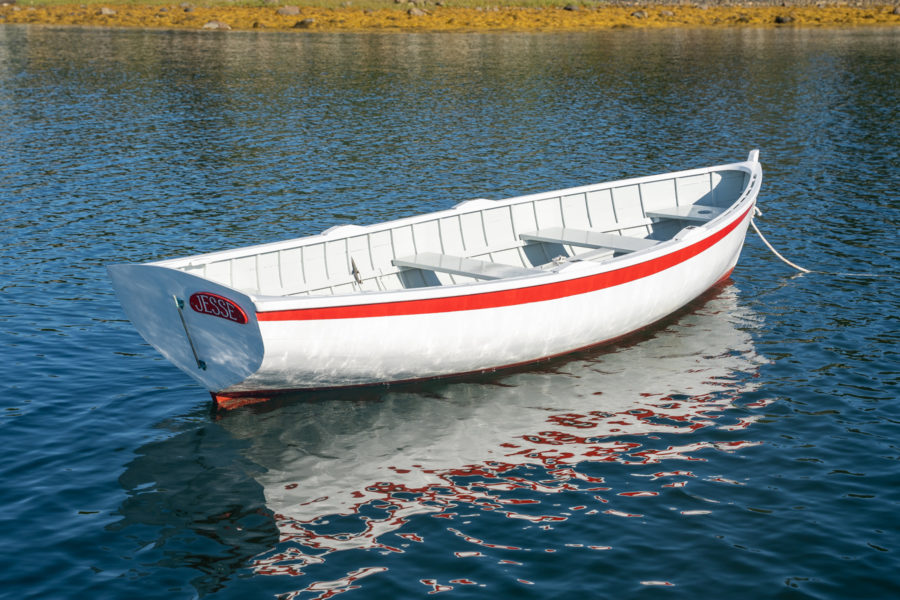 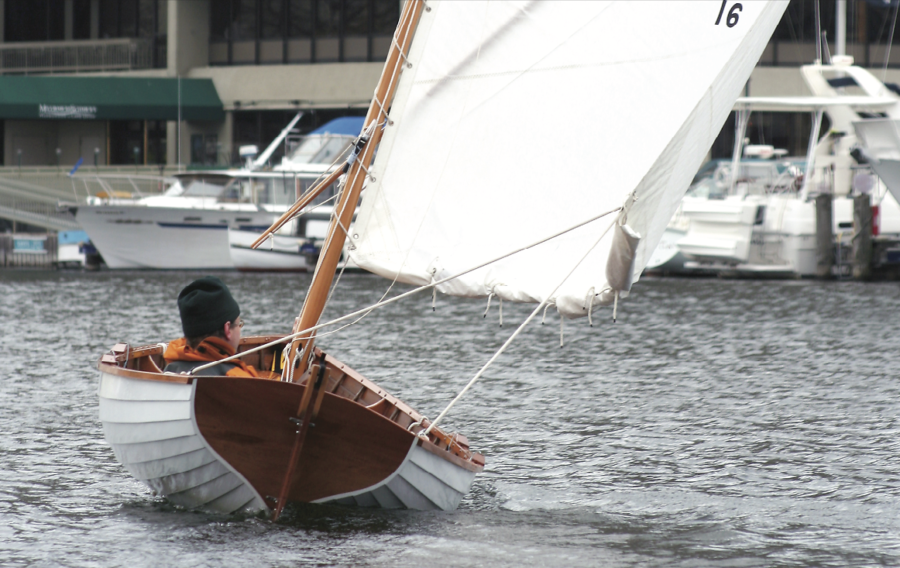 From the Small Boats Annual 2009 - Although its construction is substantially different from the classic Whitehall pulling boat, representing as it does a compromise between good rowing and sailing… 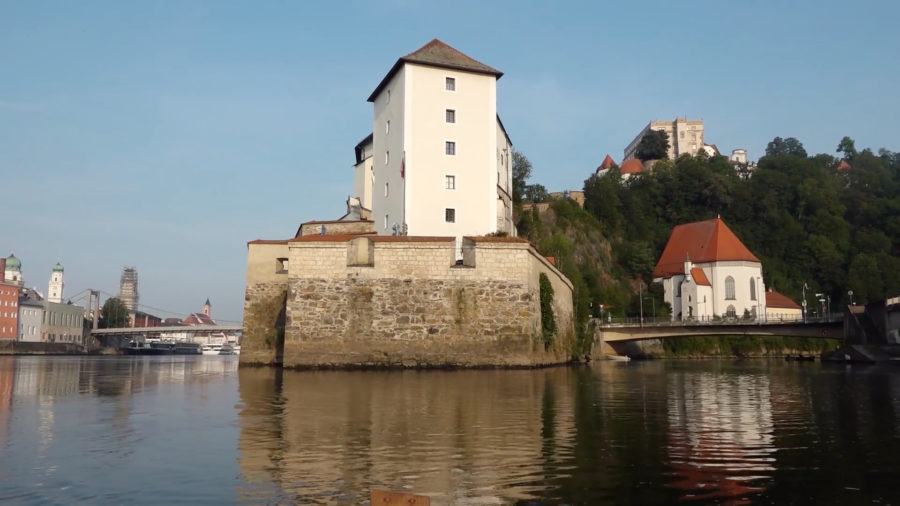 To the Black Sea – Episode 8

Riding the Current Through the Final Days of Summer. - Watch Now The Danube’s gentle current carries Jill along and the miles come easily for Tereza and Finn. Check out…