In Hein van Greevenbroek’s cruising story this month, he makes a reference to Roger Miller’s lyric, “I’m a man of means by no means, King of the Road.” I met such a man of means by no means in a marsh just outside Savannah, Georgia, while I was canoeing the Intracoastal Waterway in the winter of 1983. My paddling partner and I were making our way south along the Georgia coast and following the meanders of the Skidaway River as it looped in and around Savannah suburbs. At the intersection with the Vernon River we turned south into a brisk headwind, and rather than fight it we pulled ashore on a small hammock—a sliver of high ground with a ragged crown of stunted trees.

A whisp of smoke rose above the brush, and nestled in the trees we found a smoldering campfire next to an upturned aluminum johnboat. Its bow was propped up and the openings around the boat were walled in with weathered plywood. Plastic buckets were scattered around the campsite. There was no one there.

To the west, 50 yards away across a flat plain of tawny salt-marsh grass, we spotted a man in a plaid shirt and a green baseball cap walking toward us. His conversation with us had apparently started well before we could hear his voice, and by the time we shook hands with him and introduced ourselves he was well into the story of his life and how he came to be here in the middle of a coastal marsh. This was Arthur Dennan. He was 61, but his weather-creased face and silvery beard made him look a decade older.

He was indeed “a man of means by no means,” and although he was not “King of the Road” as the song goes, he was, at least by his own account, King of Lafayette Square. The square is an old park in the heart of Savannah where he would play harmonica with a hat out to collect pocket change from passersby. He had taught himself to play harmonica without even knowing how to hold it—“Most plays with the low notes on the left, but I play with the high notes on the left. Ain’t that a wonder?”

It was not yet midday and Arthur offered to show us around the marsh. We walked a few hundred yards through the shin-high grass to Petit Gauke Island, a half-mile-long forest of longleaf pines and palmettos. In the woods, he showed us a tree stand used by hunters and a pile of rusted steel drums that were all that was left of a moonshine still, all the while keeping up a steady line of tour-guide patter about the history of the place.

Back at his camp, he insisted we stay for lunch. From one of his five-gallon buckets he produced 10 sea trout he had caught that morning. He cleaned them, splayed them out with driftwood sticks, and set them around the fire to cook.

After lunch, Arthur showed us one of the cast nets he had made. Spread out, it was a 12′ circle of white mesh with a perimeter of a lead-weighted cord. The netting was quite fine to keep baitfish from escaping, and Arthur’s handwork was as uniform as any machine might produce. He had another net that he was still working on and showed us the netting needle and the gauge stick he used to tie the thousands upon thousands of knots that went into each of his nets. Selling his cast nets was another source of income for him; I doubted any fisherman, regarding the nets as utilitarian, paid him anywhere near what his craftsmanship was worth.

Arthur was as adept at throwing the nets as he was making them. He showed us the technique in the clearing between the river and his camp. With the middle of the net gathered up in his left hand and the perimeter line in his teeth and in his right hand, he threw it like an oversized Frisbee and the net fanned out into a full circle. It dropped wide and flat upon the grass. I tried several times to throw the net, but I could never get it to open up and fly like Arthur could. 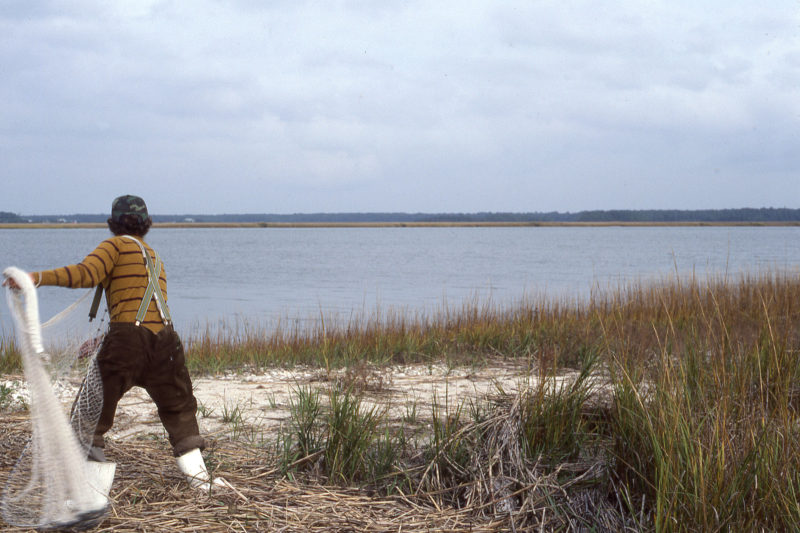 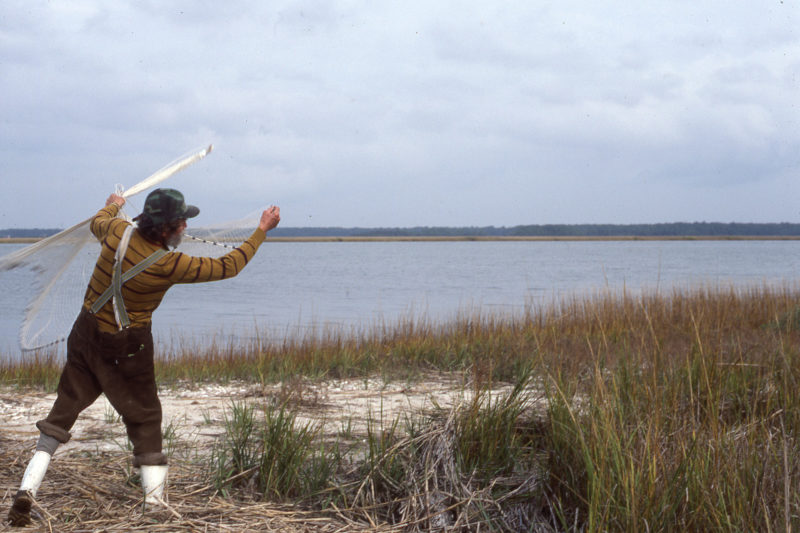 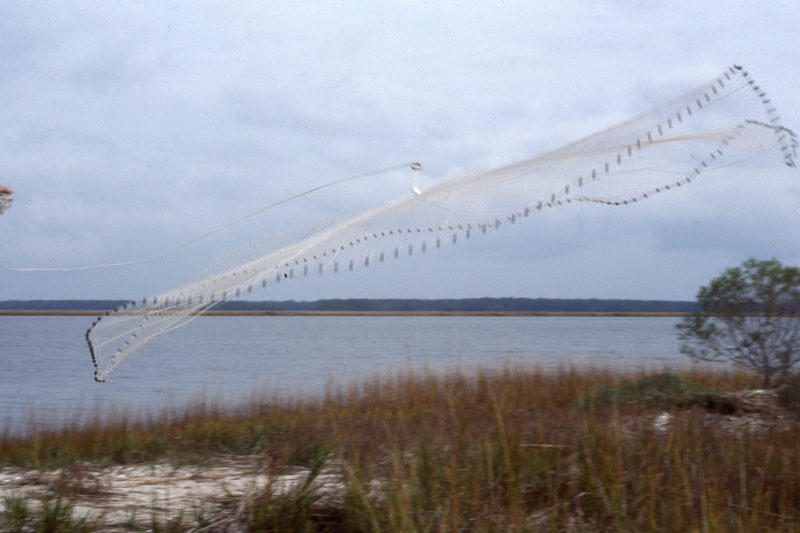 We spent the rest of the day with Arthur. He started playing a song on his harmonica but stopped abruptly and put it away, saying he wasn’t in the mood. There was sadness in his sapphire-blue eyes as he told spoke about the disappointments in his life. He had been a radio operator in the Marines during World War II and had grand aspirations for his return to civilian life. He wanted to be “a movie star or maybe the world’s greatest comedian,” but that wasn’t to be. “I ain’t a has-been,” he said, “I’m a never-was.”

We shared a dinner of soup and campfire-popped popcorn with him before turning in. Arthur disappeared under his boat where he had his bed, and we retired to our tent.

In the morning Arthur got the fire going again and began fixing oatmeal for breakfast. As he cooked he talked almost nonstop in a way that made me think he hadn’t had any company for quite some time. “Got the water boilin’ here. Ya’ll like raisins?” The raisins were somewhere in one of his buckets, so he up-ended two of them and spilled their contents across the ground. “Ain’t no use diggin’ down in the bucket when you can spread everything out like that an’ git right to what ya want.” He found the bag of raisins and dropped three handfuls into the cookpot. As he stirred them in he said, “I’ll just make believe you’re not here so’s you can see how I do it,” yet still kept up his narration. “A pinch of sugar. Some powdered milk; just stirring that up till it gets all milkified.”

After breakfast, we packed up and got ready to resume paddling south. We gave Arthur a Polaroid someone had taken of us in Thunderbolt, just outside of Savannah, and a plastic bear squeeze bottle of honey we’d been given on Daufuskie Island on the South Carolina side of the Savannah River. As we paddled away, I kept looking back at Arthur, alone again now in his tide-marsh kingdom, with his fishing rod for a scepter. “Take the shortcut,” he shouted out to us, “not Hell Gate. Cross the Little Ogeechee River, this here next river.” He was still calling out advice and pointing directions for us to turn even after the breeze had swept his voice away.

Arthur’s camp was within sight of mansions on the Vernon River, but I felt it was a good stroke of luck to take refuge from the wind with him rather than at an estate where the residents have something fancier than a johnboat as the roof over their heads. Arthur owned little, but he didn’t hesitate to share what he had with strangers.

A Boat for the Summer

The following week, we crept along the Sunshine Coast and got acquainted with the scale of the British Columbia landscape, a tidal range approaching 16’, and an abundance of drifting…

My main drum sander is a simple shop-made affair: a plywood box containing a salvaged motor fitted with a chuck to hold a 3″ sanding drum. With a 60-grit sanding…

Gary Strombo of Everett, Washington, told his friend John Leyde that he wanted to build a boat. As often happens, the moment you speak of your wishes to someone else,…